Summertime is officially upon us, and in Central Texas that means switching to light, crisp beers along with the 100 degree weather and late nights on the patio. When I was asked to write an article about Gose (Goes-uh), I thought, “Sure, no problem!” It has turned out a little bit more difficult than imagined, however. Do you know how many Goses you can get at the grocery stores from Texas breweries? Not many. What makes it even more difficult is many of the Goses on offer are only seasonal offerings, made for the summer, and they don’t all hit the shelves at the same time if they are ever let out of the taproom. That said, I pulled together a list of five Goses you can find relatively easily and enjoy almost anywhere this summer.

The style of beer called a Gose hails from a German town named Goslar, which rests on the river Gose, and is part of Germany’s pre-lager beer tradition having started brewing around the year 1000. In modern times, Leipzig has taken the mantle as the homeland of this style. There’s some cool information over at the Milk the Funk Wiki about the history of this style, but a short description will serve here: a Gose is made with at least 50% wheat malt with the rest usually pilsner malt, is very pale in color, has an ABV from 3-5%, is usually hazy, is tart to sour, and is brewed with coriander, salt, and minimal hops. Coriander gives it a lemony flavor and the salt gives it a nice tang.

To give myself a baseline of a real Gose, I procured a bottle from Leipzig’s Bayerischer Bahnhof Gasthaus & Gosebrauerei, one of the OGs, which is available at Whichcraft. On the darker side of the color spectrum, it is tart and crisp with a finish that is relatively sweet from the malts. Overall, a fine beer that I could enjoy in multiple while sitting on a patio in the evening.

While the history of Gose is interesting, this is the US, and the craft beer golden days, where American brewers tend to play loose and fast with definitions of styles so we shouldn’t expect our local favorites to hew closely to the classics. The list that follows is a collection of Texas-made Goses you can find at the local grocery store in cans around the Austin area. 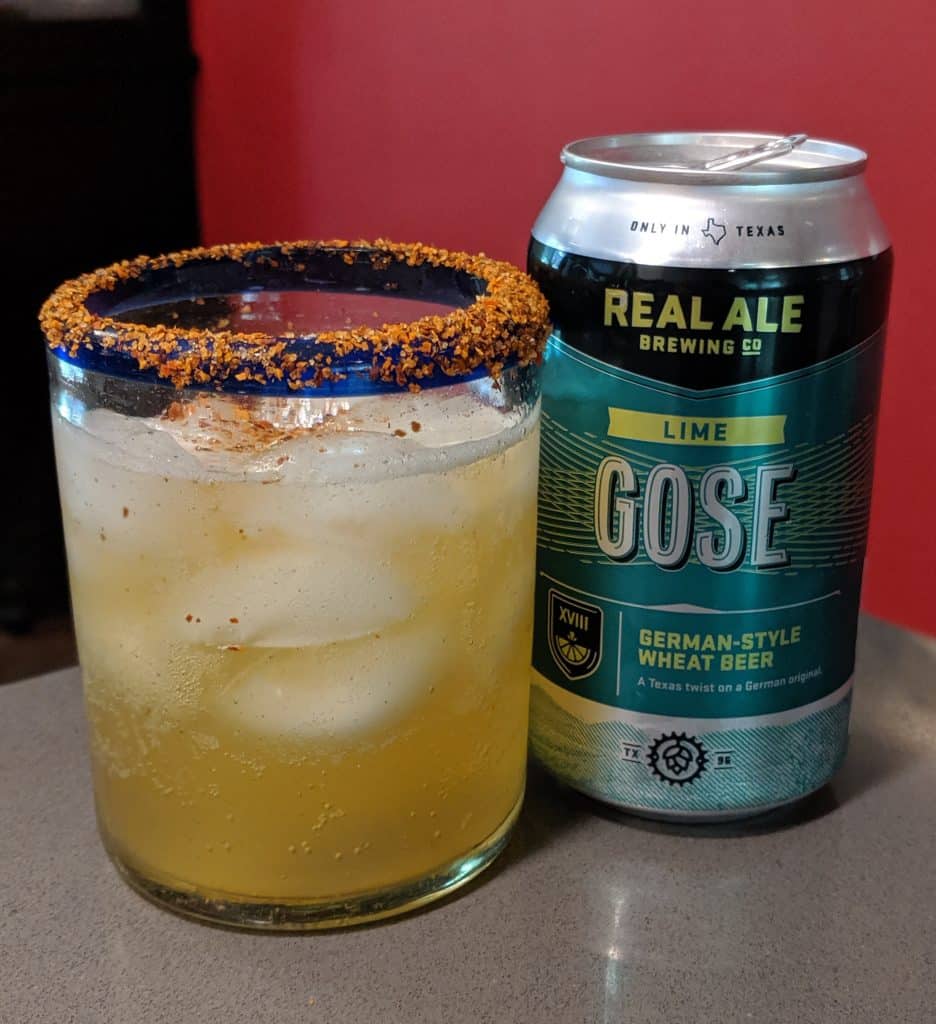 This is the first Texas-made Gose I recall being available in Austin and likely the first Gose I ever tasted. This beer started as Real Ale’s 18th Anniversary ale, in cool a fußball jersey-themed can. Later it went on to become a summer seasonal and then expanded to annual production with three different flavors for the seasons (lime, cranberry, and grapefruit). Real Ale brews this the traditional way, with coriander and salt, but then adds lime puree to the fermentor, which gives it an obvious lime kick that works perfectly. This beer is very light, tart, and has a wonderful lime flavor that is very refreshing, a perfect summer beer. Drink it straight, or pour it over ice with Tajin on the rim of your glass for a Goselada. 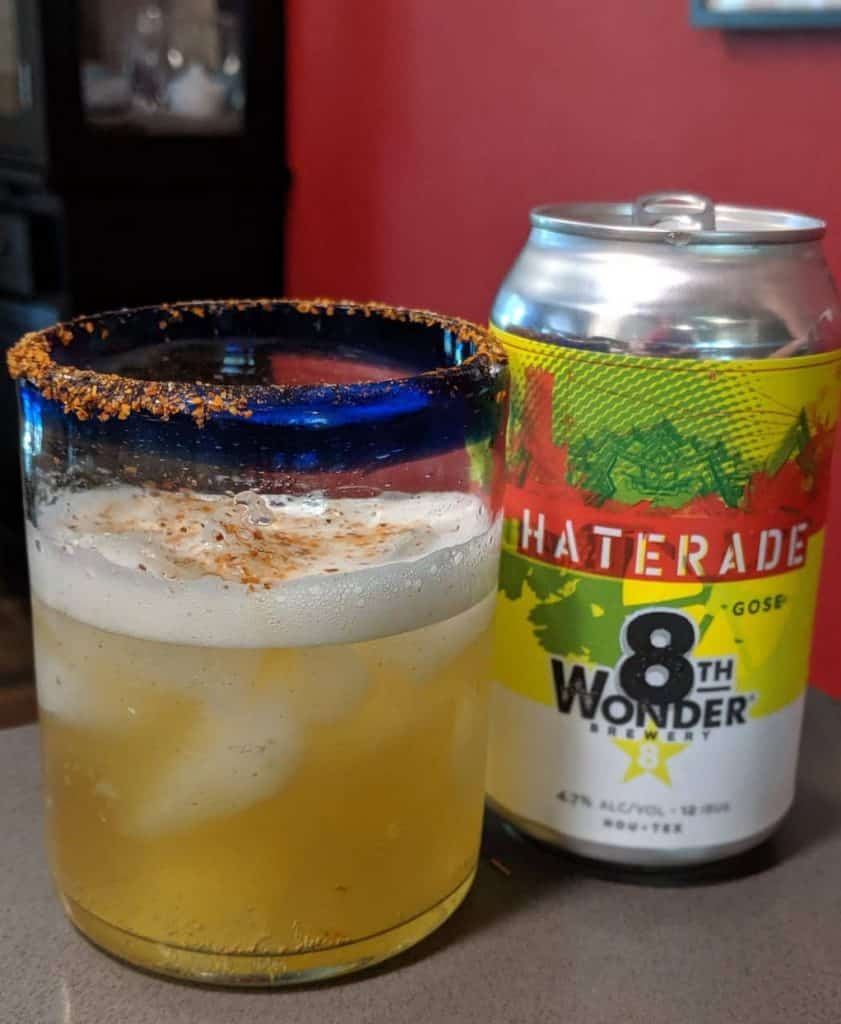 Wiktionary defines haterade as, “Hatred, as a metaphorical beverage.” This beer from 8th Wonder brewing out of Houston “pokes fun at the sour pusses in this world.” Haterade is a relatively new entry to the Austin market and is available year-round. Some just hit the shelves in Austin so I highly recommend you pick some up. This Gose hits all the highlights of the style but is so well balanced it is like drinking perfection. Where The Salty Lady is bold, and El Grito is tame, this one rides right through the middle giving you everything you want and nothing more. 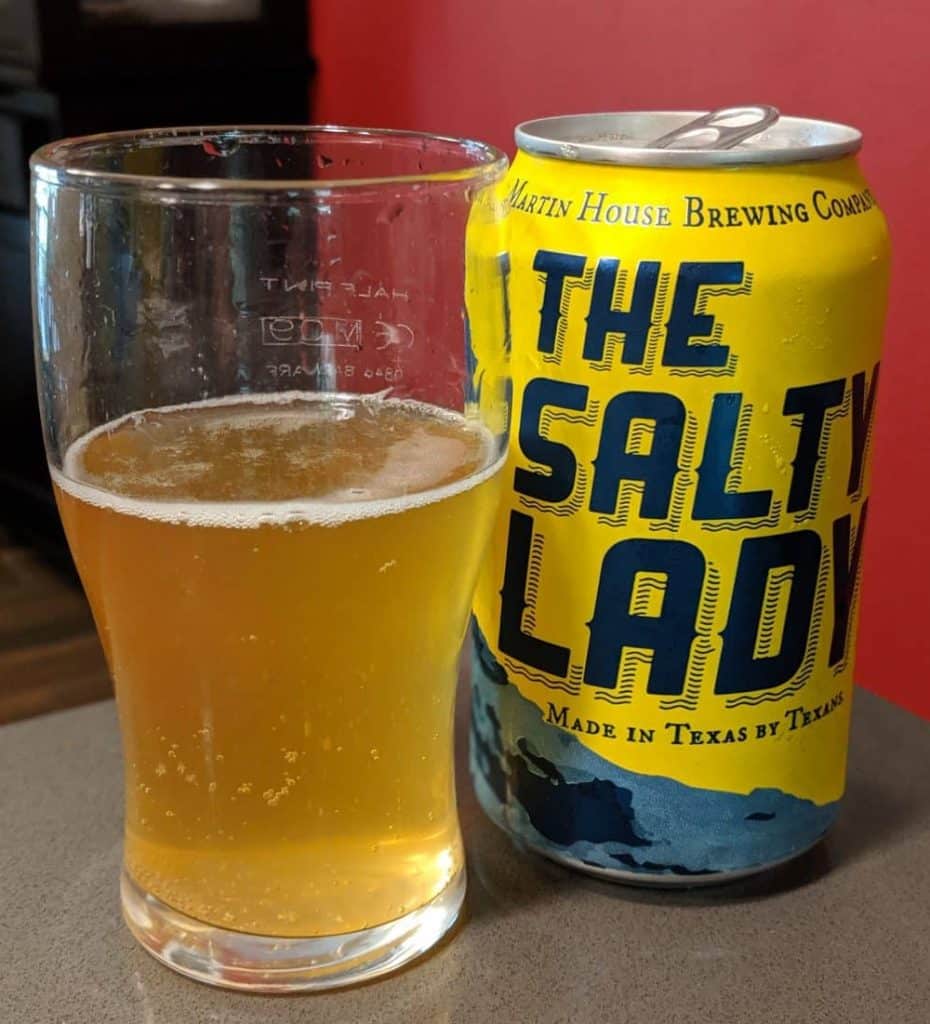 Martin House hails from points north in Fort Worth. They are known for their two-can box sets of out-on-the-fringes beers which have a great reputation among the beer cognizante. All their other beers are also excellent, and Salty Lady just might be their most well-known and available beer. It comes in a bright yellow can with blue graphics (it’s hard to miss) and you can find it in almost any store with a decent selection. This is definitely the most bold of the Goses in this list, being the most sour and salty in flavor, the highest ABV, and the haziest. It goes down easy and goes great with just a touch of Tajin as well. 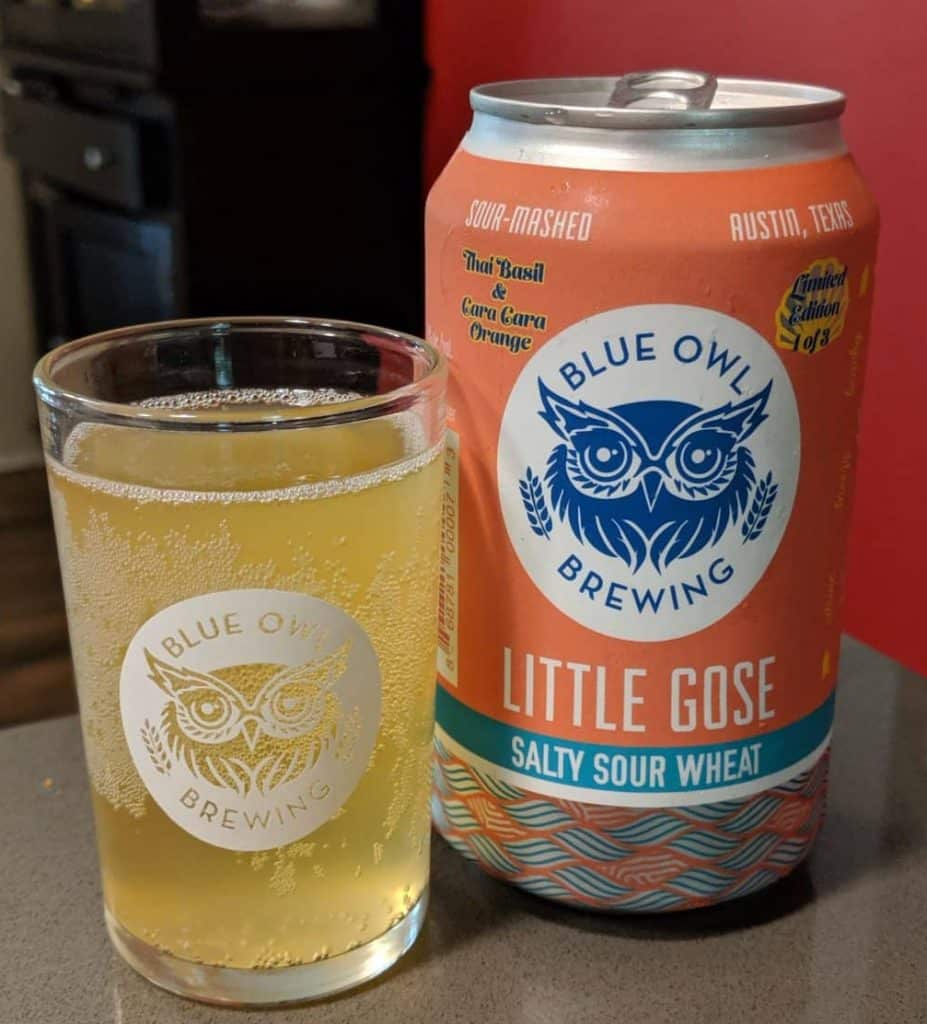 Little Gose is a seasonal beer from Blue Owl and I heard Whichcraft was about to get some in last week so check around and you’ll likely find some now. I managed to pick up a Thai Basil and Cara Cara Orange Little Gose at Sunshine Minimart on Anderson the other day. This offering has that same sourness as most other Goses but the Thai basil really shines through. I’m talking – have this with Thai food and you won’t notice the difference. It was very good and my wife’s favorite of the five. They generally make multiple batches with different additives, so you may not be able to find this one but whatever Little Gose is available will likely be just as good. 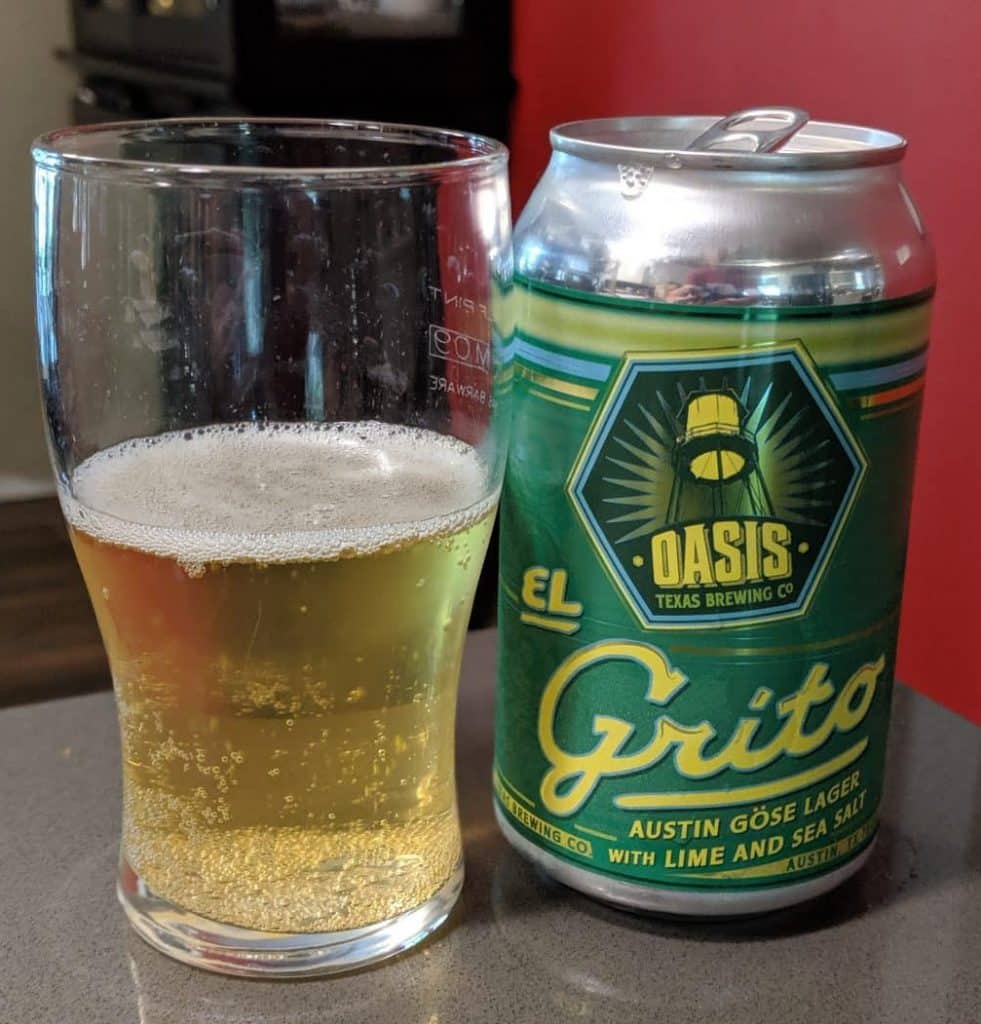 Oasis is known for producing beers on the lighter side and the Gose style fits in perfectly with that. El Grito is a Gose made with lime, similar to Real Ale but not nearly as pronounced. This was definitely the lightest Gose on the list, with very little sour and not much of a pronounced lime or salt flavor. The body was solid and overall it was flavorful and light. If you really don’t like sour, this is a good entry Gose for you.

That’s the list of Goses available in cans for the summer in Texas. There are, however, a lot of other places to go and Goses to drink out there in Central Texas, here’s some more:

Live Oak brewing just Tweeted they have a Gose on in the taproom. Their German heritage and perfect brewing means this should be amazing. On their website, Lazarus Brewing shows a Blackberry Gose on tap. I love berries of all type and this one sounds great. Up in Cedar Park, Red Horn Brewing is putting out their Watermelon Crawl Gose on tap and in cans. Watermelon and tartness go together like a horse and carriage. If you can find a bottle, Jose the Rose Gose from New Braunfels Brewing is very good. I found one at Total Wine on Brodie the other day but I’ve heard these haven’t been shipped in quite a while. Finally, Snorkel from Jester King uses a Gose base and includes mushrooms and some other ingredients. Hard to bring to the greenbelt but well worth drinking on the patio at home.

Outside of Texas, there’s plenty of Goses to be had. Sea Quench from Dogfish Head holds its own with any local beers here. Avery Gose is also a fine selection while the Gose Wild Sour from Destihl does a fine job of satisfying as well.

There’s plenty of more out there that I missed, I’m sure. If you have a favorite Gose, keep on drinking it but try out some of those I’ve listed here, you won’t be disappointed.