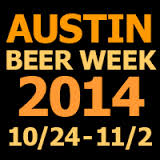 There are several events going on tonight for Austin Beer Week.

**Events are subject to change! Always check the calendar before heading out throughout Austin Beer Week 2014! http://austinbeerweek.com**

Austin Eastciders Small Batch No.1 is a single variety Winesap cider made with apples grown in the Texas Panhandle. Winesap apples were commonly used for cider making pre-Prohibition, this is the first of a series of Eastciders releases made using rare American heirloom and cider apple varieties.

Come enjoy the 3 ‘C’s! We’ll have our canned styles, firkins of cask-conditioned ales, and special beer cocktails dreamed up by the bar wizards at Whislers.

Austin Homebrew Supply is proud to host the great people at Rogness Brewing and Austin Beerworks, who will be offering samples of some of the best beer in Austin to patrons of legal age. Come on down and try some!

Hops and Grains will be featuring a newGreenhouse IPA. Keep the glass the purchase.

$30 includes all food and beer pairings. Get tickets for this great beer dinner now before their gone, click here.

Texas’ place in the hierarchy of craft beer destinations is on the rise, something the rest of the country is catching onto but we’ve known for some time. There’s no better place in the Lone Star State for well-crafted, genuinely delicious craft beer than Austin, the epicenter of awesomeness. Tonight, some of the best beers in the country, crafted right here in Austin, are coming out for the occasion, as well as some beers rarely seen ’round these parts! We’ll have beer from our friends at Austin Beerworks, Independence, (512), Live Oak, Real Ale, Hops & Grain, Jester King, Oasis Texas, and more!

We are tapping a firkin of our brand new seasonal, Tuxedo T-Shirt Black IPA, that has been dry-hopped with Simcoe and Amarillo, and aged on oak inside the firkin. Expect caramel and vanilla notes underneath an explosion of floral and piney hop aroma. You even get to take home the glass!

Adelbert’s and Austin Beer works will each have 5 beers available, three regular and two specialty beers: