It’s finally here! The 6th year of Austin Beer Week kicks off today, so loosen up that liver and get your calendar ready. Here are a few event highlights to help you plan your ten-day celebration of all things craft beer.

Be sure to stay tuned to Craft Beer Austin for a daily listing of what’s happening around town! 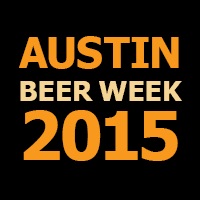 Andrew’s Pick: ABW Official Opening Party – Craft Pride:  Always a great time.  Expect it to be a rainy day with a bunch of people crammed in, but you can never go wrong with the opening party.  There will be a lot of good beer on tap and good people to enjoy it with.
Pam’s Pick: Hops & Grain kicks-off ABW with a BANGer’s Batch of Greenhouse IPA! It’s opening day, so you have to go big. After hitting up Craft Pride, walk a few steps to Banger’s and enjoy Hops & Grain’s BANger’s Batch with food to pair, a cornhole tournament and meet the brewers.

Due to the weather, two of the biggest events planned for Saturday have been postponed – (512) 7th Anniversary is now planned for 11/14 and the Draught House 47th Anniversary is now planned for 11/7 – but never fear, there are plenty more events indoors!
Andrew’s Pick: 4th Tap Launch – Black Star Co-op: Nothing says the craft beer scene like the cooperation between two co-op breweries. Check out Austin’s newest (for the next month or so) brewery releasing their beers at one of Austin’s best brewpubs.
Pam’s Pick: Tailgate Cask at the Beerliner: I know plenty of hard-core UT fans that will be tailgating rain or shine. Be sure to stop by the famous (infamous?) Beerliner and grab a cask tapping of Sunbreak IPA with experimental hops.

Andrew’s Pick: Sour-mash Home Brew Class – Blue Owl: Interested in learning more about sour mashing?  This would be a great place to start.  Jeff will walk you through the whole process to help out with your home brew operations.  Blue Owl will have multiple different classes through Austin Beer Week.

Pam’s Pick: Decktoberfest – Red Horn Coffee & Brewing: For those of you looking for something North, check out this Oktoberfest event featuring live music, food trucks, prizes and of course beer. Mmmmm Smittlefest…

Andrew’s Pick: Metal Monday with Real Ale – Craft Pride: Metal and Mysterium Verum just seem to go together in this yearly event at Craft Pride.  They will have 10 Mysterium Verum beers on tap for you to enjoy.
Pam’s Pick: Cellar Madness Monday: The Whip In is going to release 50+ choices starting this Monday. Who doesn’t need more beer for their own cellar?

Pam’s Pick: ELM + Austin Beerworks Restaurant Crawl – Starts at Easy Tiger: This is probably the most affordable beer + food pairing I’ve come across at $25 per person.  It’s limited to 40 people, so reserve quickly. Includes four food and beer pairings from Italic and Arro and a T-shirt!

Jester King Brewery & Infamous Brewing Haunted Halloween Cruise – duh, what more could you want? Two amazing breweries, a cruise on lady bird lake with the brewers, candy and desserts and a costume contest with prizes! Plus you get off the lake early enough to hit up another great ACBW event!

Andrew’s Pick: Funk & Sour Fest – Jester King: This ever-changing event seems is a yearly staple at this point.  Jester King does not hold back this year with some great food and beer (as well as wine and cider) pairings.  Unlike previous years, this year will include unlimited samples.

Pam’s Pick: Pre-Halloween Party at Circle Brewing: Yes, I love all things Halloween, so this is a shoe-in for me. Dressing up is optional, but there will be prizes for best costume, live music, plus special tappings include pumpkin pie ENVY.

Andrew’s Pick: Halloween at Hops & Grain – Hops & Grain: If you have not been to a Hops and Grain party, you really are missing out.  They never hold back and this is one of the best beer focused Halloween parties around.
Pam’s Pick: Halloween Party – Brass Tap Round Rock: Aside from the fact that the Brass Tap always has a killer beer selection, there will also be a costume contest, live music, and Oktoberfest and Pumpkin beers galore.
More Craft Beer Related Posts: