Meet the Brewer from Deep Eddy | Jack Allen’s Anderson Lane | 5-7pm |
Enjoy samples of the distilleries vodka including Grapefruit, Lemon, Sweet Tea and Peach. There will also be plenty of swag and delicious food specials by JAK’s Chef Forrest Briwa including a black peppercorn garlic pappardelle pasta with house made vodka sauce and drunken shrimp over steamed rice. Meet the Maker events at JAK are free and open to the public! 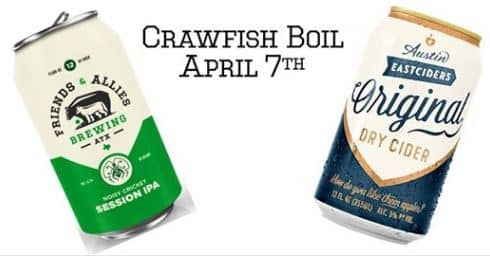 National Beer Day | NXNW | A Free Beer | Celebrate this National Beer Day the NXNW way! On Sunday, April 7 the North by Northwest Brewing team will buy your second beer so you can extend your Sunday Funday just a bit longer. Select one of their mainstays like the Zombie Dragon East Coast IPA, or one of their seasonal features like the Pecan Street Lager. Pick your poison and let’s have some fun!