Check out Austin craft beer releases and openings that are happening around town this week.

While, sadly, I cannot write an events article as of late, I am going to try to keep of list of new beer releases that are happening around town.

In this edition, I am also tracking all the breweries and brewpubs planning to reopen this weekend.

(note: things are changing quickly, so please check with the brewery before you head out)

Breweries that are re-opening their doors after initially shutting down due to Covid-19.

Re-opening on Friday, June 12th with a reservation system 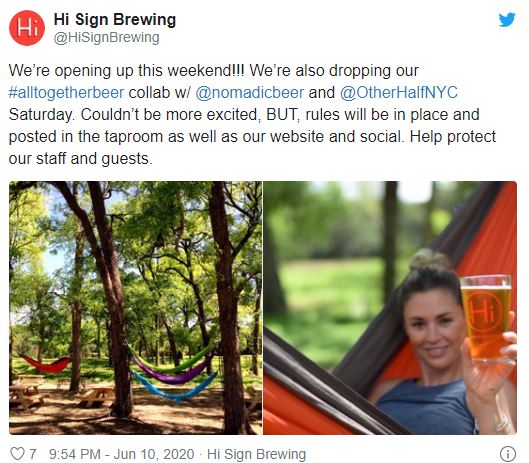 New offerings from breweries that are releasing this week, or offerings that are now returning to the menu after a hiatus. We cannot promise they will still be in stock by the time the weekend comes around, so check the online ordering systems first!

All Together- IPA – Collab with Other Half and Nomadic Beerworks

Walk in the Park – Hazy Pale

Cheers y’all! Enjoy your beer to go! Be sure to check the brewery website or social media for official hours and offerings.