Update: I have confirmed with management that B.B. Rover’s is no longer planning to close.

They are hiring and expanding their hours.

“Our property owners have agreed to let us keep operating as we try to work out the details for a potential sale of the business. Our kitchen has been closed for a while, but we are looking at having limited food items for various times. We will have chicken or beef fajitas available this Friday (1/18) from 6-9 PM, and this Sunday (1/20) for the Saints game we will be serving chicken-and-sausage gumbo. Many thanks to our customers who’ve stuck with us in this limbo period. We do appreciate everyone’s pattience and understanding.” ~Eugene Downing

B. B. Rover’s Cafe and Pub was the first craft beer pub of its kind to open in Northwest Austin serving up over 100 craft beers, long before local craft breweries burst on to the scene. Due to several factors, the pub is scheduled to close by the end of the year unless a new buyer comes forward.

I asked one of the owners, Eugene Downing, if he would share some of his thoughts on the history of the pub, and what the impending closure would mean for the community.

BB Rover’s was opened in November 1987 by Jack & Diane McClary and John Gross. The McClary’s had adopted an African grey parrot in Nigeria. At the time they had a dog named Polly, so since there was a dog with a parrot’s name, they gave the parrot a dog’s name, Rover, for whom the bar is named. Over 1,500 people have joined BB Rover’s 101 Club, trying a hundred different beers to get a t-shirt, their name on the wall, weekend discounts and admission to the members only 101 party on Labor Day.

Before the craft beer revolution had really taken off, the only way to have a hundred different beers was to get them from every importer you could find, hence the “International Cafe & Pub.” While we’ve kept numerous imports from areas with long traditions of brewing (Germany, Belgium, the British Isles), the focus has shifted over the years to US and especially local craft beers on draft and in bottles and cans.
My favorite thing about the pub is the community it’s created. We greet dozens of customers by name every day, and often have their order ready before they sit down. Longtime customers who’ve moved away and return to Austin for visits are as (or sometimes more) likely to come see their Rover’s family as they are to see their actual family in the area. 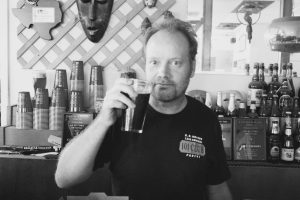 Our regulars are taking the news pretty hard. Some are discussing where else they might meet in the neighborhood or lamenting that there’s just nowhere else they feel comfortable. While many have tossed around the idea of buying the pub, individually or by pooling their resources, a few have even gone as far as meeting with our broker (including one just this week).
I will miss these regulars, but I look forward to being able to catch up and have a beer with them anywhere they might gather in the future. Most of all, I’ll miss my coworkers. I came to Rover’s a decade ago after the untimely death of my brother Ron, who had bought a share of the bar from Jack and Diane, who were like family to him, and now the Rover’s staff is the same for me. I’ll miss them most of all, though I hope I’ll be able to see them soon wherever they end up.

B. B. Rover’s is hosting an End of an Era party this Sunday from 12pm to 10pm to celebrate the over 30 years of being Northwest Austin’s favorite craft beer bar.