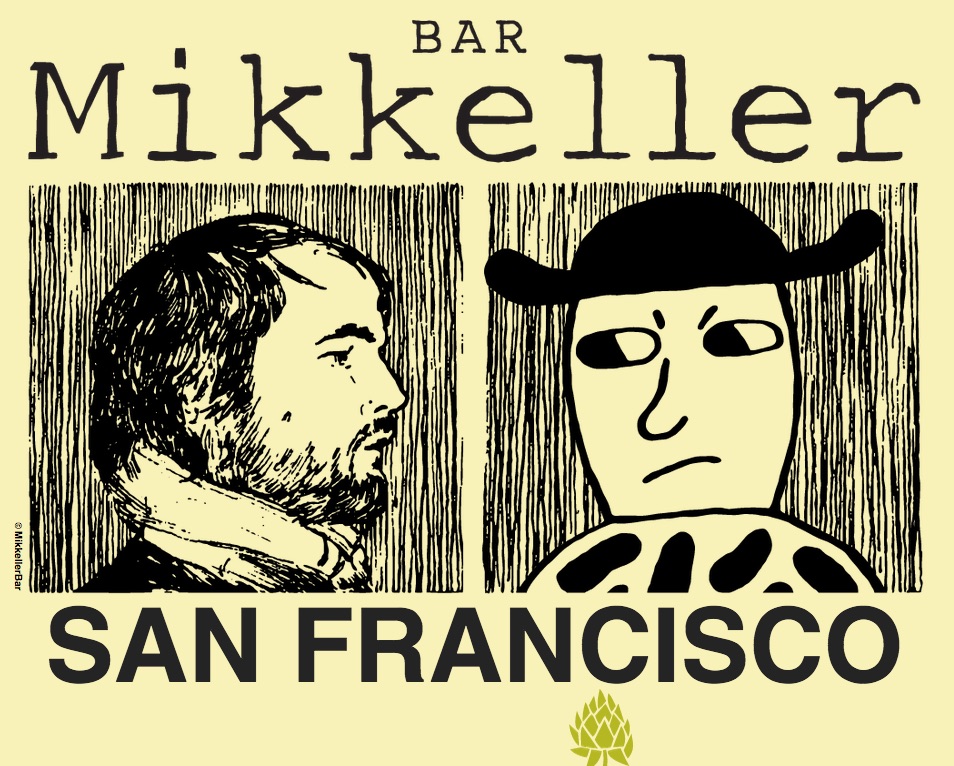 I travel to California quite a bit for work and I don’t normally have much time for anything else. However, I was recently able to squeeze in a quick trip to San Francisco. Like many of you, my vacations always include some type of beer haul or brewery visit. Since I was in the city for about a day and a half, I only sketched out a few key places that I wanted to check out. But thanks to a great Uber deal and dumb luck, I ended up with a few extra impromptu visits. Here is my take on a few of the must do craft beer spots in this beer-lovin city.

Any beer geek is going to put this bar at the top of their list. It’s the first stateside Mikkeller Bar. It opened in 2013 on the edge of the Tenderloin district. The bar features 40 taps and 2 cask handles with each beer cooled and served at its ideal temperature. The bottle list is meticulously hand-picked to delight beer geeks of all levels. The bar also features The Tivoli sour room (I didn’t make it down there) in a hidden cellar space that exclusively serves lambics and sour beers. The menu was crafted to pair well with the beer and is on par with a high end gastropub.

You can expect to spend no less than $6.50 a pint, but that is in line with most of the bars and pubs in the city. We were able to safely get in and grab a spot in the bar early in the evening, so I’m not sure what the late night crowd might be like. I recommend you make this your first stop of the evening, especially given this bar’s location. The Tenderloin late at night can get a little sketchy. Regardless, this is a must do addition to your list. 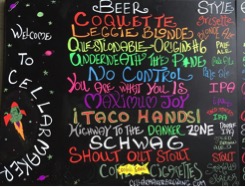 Not far from Mikkeller in the South of Market (SoMa) district you will find the small batch Cellarmaker Brewing Co. As you can imagine, anyone that wants to mass produce beer needs to do so outside of the city. Cellarmaker is different though, not only are they not a production brewery, they have no interest in ever becoming one; “we are a San Francisco brewery producing small batches of experimental beers. It is our goal to keep your taste buds intrigued by constantly producing different flavors. To us, making the same 3-4 beers all the time would be boring in many ways.” If that’s not enough to get you over there, a few San Fran beer experts rate them pretty high up there with breweries like Russian River, Sainte Adairius and Sierra Nevada. We all take these rankings lightly; however, I think this one is spot on and it’s one of my top picks in the city. With beers like taco hands and coffee and cigarettes, you will kick yourself if you don’t get your hands on one of their one-of-a-kind brews during your trip. 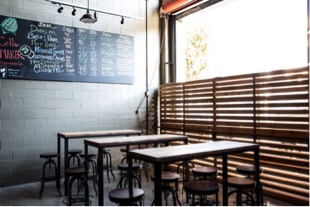 A few things to note: you can find their beers on tap locally, but they do not bottle or can. The only way to enjoy their frothy goodness at home is if you fill a growler to go (California has some strange growler laws, so make sure your are compliant). Even though there is a brewery in the back, it’s definitely a bar, so leave the kiddos at home. They don’t have a kitchen, but you are welcome to bring your own food, or order from a nearby restaurant and have it delivered. 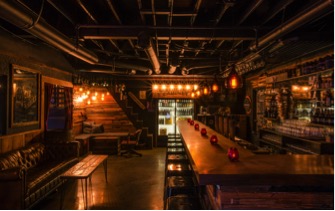 A great deal on Uber rides facilitated more stops than I originally anticipated; and therefore, day one ended with an impromptu trip to Speakeasy Brewery. Speakeasy is a large production brewery that is located in an industrial complex on the south east side of town. The area feels a lot like the industrial complexes that many Austin breweries occupy; however, once you walk through the door you are instantly transported to a real Speakeasy. The tap room has been transformed into an old world style speakeasy on par with any bar that you would find in the city. Aside from the impressive digs, the tap lineup is truly spectacular. I have had the Prohibition Ale on several of my trips to California, but I haven’t had much else from the brewery. The brewery features 12 taps from the new Vendetta IPA to the Old Godfather Barleywine. 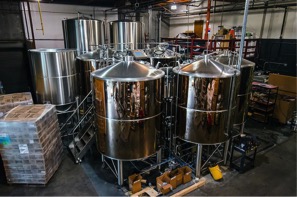 The staff was incredibly friendly and definitely passionate about their beer. When I mentioned that I was a blogger for Craft Beer Austin, the bar manager immediately asked my group to stay after closing and offered to give us a tour of the brewery. The brewery is currently undergoing a large expansion from a 20 barrel system to a 60 barrel system featuring two side by side 30bbl mash tuns and kettles and their own bottling and canning line. The new system will go on line this summer. Until then they are brewing 24/7 on the current system “in the shadow of its awesomeness” according to assistant brewer Cat Wiest. Speakeasy distributes throughout California and has distribution lines in New York and Boston, unfortunately there are no current plans to expand to Texas.

They just celebrated their 18th anniversary where they launched their first beer in a can, Baby Daddy Session IPA. While you are there, be sure to bring me back a six pack.

That’s a wrap for day one. Day two ended up being equally epic!

Day two started out with a delicious brunch. The hotel concierge recommended Dottie’s true blue café, which was close by; however, when we arrived there was a line that wrapped around the block. Apparently Dottie’s is the place to be. So instead we used more Uber discounts and headed to Town’s End Restaurant and Bakery. We were blown away by how great both the food and the service was – definitely add this spot to your list. We were planning out our next stop during breakfast when we realized that 21st Amendment was within walking distance.

21st Amendment’s location in the city is a brewpub very close to the San Francisco Giants stadium. The pub houses a 13 barrel system used for pilot and experimental batches – most of their production beers were born here. Aside from their mainstay beers, you will get to try an assortment of beers that are not part of the production offerings. The most interesting beer that I tried was the HQT, and Egyptian ale that is brewed without hops. Since we had just eaten brunch, I did not try the food, but they have a full menu and standard dining hours. 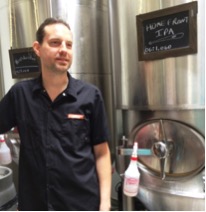 When we arrived, we were happy to discover a rare appearance by Zambo, the head brewer, who was onsite for the afternoon doing tours and tastings. The good luck continued as we were fortunate enough to sample this year’s batch of Homefront IPA brewed with orange peel and aged on Louisville Slugger maple baseball bats as part of the annual Hops for Heroes event that benefits a different military charity each year. 21st Amendment was among the 10 breweries that participated from around the nation and the beer was released Memorial Day weekend. The brewery just announced the opening of their new state of the art production brewery in San Leandro. The facility houses a 100 barrel brew house that can fill 500 cans per minute.

Next we decided to walk over and check out the new San Francisco Giants stadium situated right on the bay. As we were walking around, we stumbled on a place called “The Yard” right across from the stadium. It is a food truck spot with amazing views of the stadium and spots to watch the game. And of course, there is also a great beer garden run by Anchor Brewing, one of the oldest breweries in the city. It turns out that several breweries in the area have “store fronts” to showcase their beers without having to travel all the way to the production brewery. If you are near the stadium, or want to catch a game for free, make this your destination of choice. The weather is fantastic most of the year and Anchor is selling non-production brews for your enjoyment. 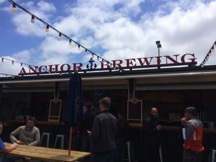 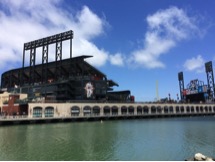 Using the awesome Uber discounts, we decided to trek over to Haight Ashbery to hit the only bar that was on my agenda for the day, Toronado. Tornando is described by many as the best craft beer dive bar in the city and it lives up to that description perfectly. What is a craft beer dive bar you may ask? It’s a badass bar that serves you Pliny for three dollars and plays Suicidal Tendencies. Or give the original Blind Pig a shot for your three bucks. What you should not expect – overly friendly staff. It’s a dive bar and you are just lucky to be there. This is hands down my favorite bar in the city. I wish I was there right now. 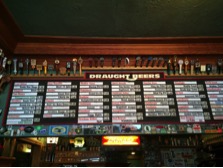 When you run into your favorite Austin beer celebrities, ask them about Toronado over a pint and then sit back and enjoy the beer stories. You are welcome. That’s my personal take on the city. I didn’t write up any of the bottle shops in the city, but the one you should make a trip to is City Beer Store.