Welcome to our new series “Beer with Gin” where we hear from local beer expert Virginia (Gin) Benavidez, co-founder of The Beer Museum (and most recently the hostess with the most-est at the Austin Beer Guide Best of 2019 Party) to discuss the origin of the Farmhouse Ales.

Could understanding farmhouse ales really be as simple as analyzing the words that comprise its name? Well, yes and no. It would be a lot like analyzing the term “misfit”. The components of the word tell you that a misfit is something or someone that doesn’t fit in, but the word doesn’t tell you what makes that person or thing different – why they don’t fit in. Nor does it tell you the common link that brings a group of misfits together so perfectly that they are capable of fighting evil clowns, discovering pirate ships, and hitting the guts out of a baseball.

Farmhouse ales are misfits in all these ways. Indeed, as the name suggests, farmhouse ales are (or at least were) literally beers that were brewed in a farmhouse. As far as defining an actual style, though, the name reveals nothing. That’s because farmhouse ales are as weird, wild, and non-conforming as they come. And we love them for that. To recognize how farmhouse ales became the lovable misfits of the beer world, we have to look back at their history…or lack thereof.

For centuries, much of Europe considered brewing to be an inherent part of farming. Farmers grew crops and, after harvesting those crops, when the weather was cool, they used some of the grains they had harvested to make beer. That beer was intended to last until the next harvest when they would brew again. It was a cycle that followed the seasons and gave farmers the nourishment they needed to continue their laborious work. Unfortunately, all that work meant that farmers rarely had the ability to document their recipes and their brewing processes, so the details of early farmhouse ale history are essentially nonexistent. By the time we do start to see written records of farmhouse ales, we’ve flashed forward to the 19th century where the Industrial Revolution is well underway, farms are few and far between, and new easy-drinking lagers reign supreme. Once a common practice across Europe, farmhouse brewing was now mostly confined to small areas of Belgium, France, and Germany. Refusing to let go of the past, these areas held on to their time-treasured farmhouse brews, waiting for them to become relevant once again. And just when it looked like their time was up, an interest in farmhouse ales began to re-emerge in the 1970s, thanks in large part to popular Belgian brewery Brasserie Dupont. I guess you could say that before the 70s people thought that farmhouse ales were pointless, but then they finally got Dupont . 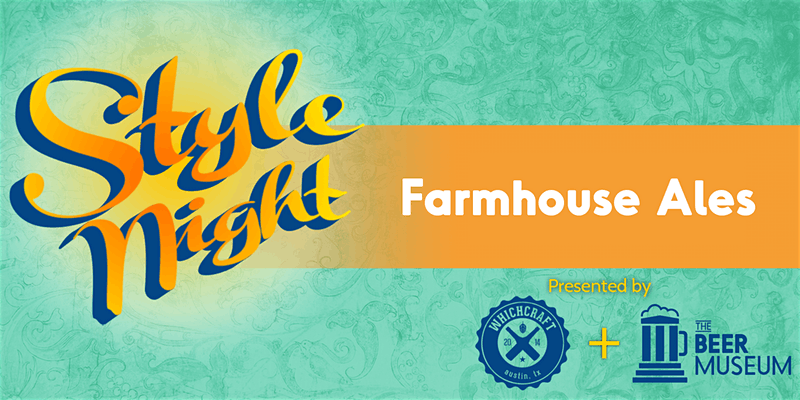 In more recent decades, farmhouse ales have become integral to the United States beerscape, despite the fact that most U.S. farmhouse ales aren’t actually brewed on farms. That part doesn’t matter very much to the typical U.S. beer nerd, it’s really just all about that rustic beer taste. What exactly is this farmhouse flavor that everyone’s going Lady GaGa over? Lord, not even Bradley Cooper has a straight answer to that question. Let me start by saying that farmhouse ales are less of a style and more of an umbrella category for several different beer styles. For example, popular styles like saison, bière de garde, lambic, and therefore gueuze (a blend of lambics) all have farmhouse roots. Not to mention several other more obscure styles from countries such as Sweden, Norway, and Denmark that I can’t even begin to figure out how to spell on this keyboard.

With so many styles under the general label “farmhouse,” it’s difficult to determine the defining characteristics that they all have in common. Very broadly, it can be said that farmhouse ales are yeast-centric beers. It’s those funky, wild flavors the yeast creates that brings all of these farmhouse variants together into one big, odd, happy family. The specific types of “funky, wild flavors” certainly vary from beer to beer, but they tend to evoke the scenic scents of an actual farmhouse. Don’t believe me? Test it for yourself. If you ever find yourself at a beer tasting that includes a farmhouse ale, when you’re asked to describe its flavors, just name anything you can find in a barn: wet hay, a horse blanket, a rusty pitchfork. Almost anything you say will be heralded as an expert observation, as long as you stay in theme. I promise. Ok, I don’t promise, but this still sounds like a fun game to me.

Just like many of my favorite farmhouse ales, I’m sure the content of this article has been clear as mud. If you did, however, find some of this information enlightening and you’d like to learn more about farmhouse ales, join me for Style Night at Whichcraft Taproom and Bottle Shop on Thursday 2/27 at 7PM where we’ll be tasting and learning about local farmhouse ales made right here in Texas. More details and tickets here.

PS – If you come to the event and tell me that one of the beers tastes like a rusty pitchfork, I’ll give you a sticker.

We done good. Come get our beer on tap!!