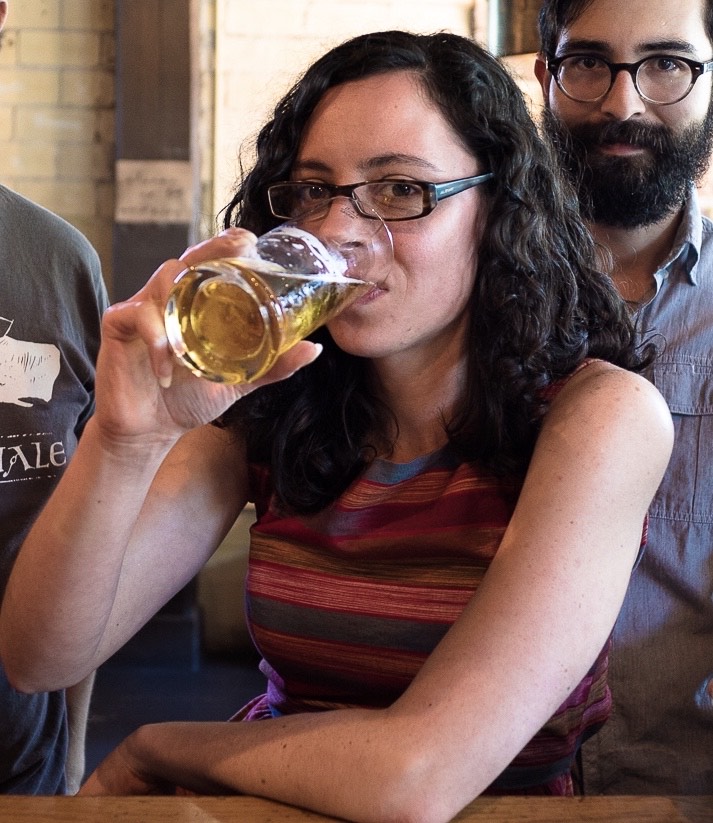 A while back, I was asked if I could write on the topic of beer and diversity. I of course agreed, as I’d done some research on the topic and knew that it was something I needed to delve into more deeply. To start to prepare, I purchased the book Beer and Racism: How Beer Became White, Why It Matters, and the Movements to Change It by Nathaniel G. Chapman and David L. Brunsma. What I found after reading the book is that I have so much more work ahead of me when it comes to recognizing, understanding, and promoting diversity in beer. I consider this an ongoing journey for myself, but for the purposes of this article, allow me to simply share with you my thoughts from the tip of this iceberg.

Beer and diversity is a very broad topic, so I needed to narrow my focus in order to write this article. Since I’m a self-proclaimed beer historian, I figured it would make the most sense to write about the history of diversity in beer. And since it’s Black History Month, I thought it would be most meaningful to research this subject in the context of Black history. Not surprisingly, that’s still a very broad topic, but at least I had a starting point. And to begin, as with any type of history, I think it’s important to first look at where we are now.

So, where are we, the U.S., currently when it comes to diversity in beer? Well, to be honest, we’re not doing great. And I don’t think I need to tell y’all that. I assume many of you who read the content on Craft Beer Austin are fairly avid consumers of craft beer and understand that there’s a reason why bearded white men are typically associated with the craft beer scene. Despite this, in just the past few years, there are signs in the craft beer world that “change is brewing,” to use a common phrase. As Chapman and Brunsma said in their book regarding the Brewers Association’s hiring of J. Nikol Jackson-Beckham as their first-ever diversity ambassador in 2018, “While this move may be long overdue, it is certainly not too late” (157).

The Brewers Association conducted a survey in 2018 that showed only 1% of U.S. breweries are Black-owned. In 2022 (that’s the future, y’all), Austin will finally receive its first Black-owned brewery from Shannon Harris called Urban Jungle. Currently, the only Black-owned brewery in the state of Texas is Weathered Souls in San Antonio, owned by Marcus Baskerville. Allow me to repeat myself on this one: Out of the 341 breweries in Texas (per the Brewers Association, 2019) only ONE is Black-owned right now. And zero are in Austin. If that doesn’t blow your mind, you probably need to get your head examined because your mind-exploding mechanism is most definitely broken. For more information regarding Urban Jungle and Shannon Harris, check out this article.

A quick glance at our country’s beer history may lead you to believe that beer in the U.S. has always been entirely associated with white men, and though you wouldn’t be alone at all in this belief, you’d be wrong. Indeed, it is difficult to find books on U.S. beer history that mention anything other than U.S. beer’s white, European origins, but that doesn’t mean this is the only story, nor is it an accurate story. Chapter 2 of Beer and Racism examines some lesser-known and hidden stories about American beer history that still only reveal a part of the bigger picture. For starters, beer was not “brought” to America – it was already here. It should come as no surprise that indigenous people had been making their own beer long before Europeans colonized America.

Furthermore, even after British colonization, white men were not the only brewers in this country. In their book, Chapman and Brunsma touch on the rich brewing history of the Gold Coast, concluding that slaves brought to the U.S. were brewers and beer drinkers. An interviewee in their book also makes reference to Peter Hemings, a slave at Monticello who brewed beer for Thomas Jefferson. And though you may have at least heard of Peter Hemings, even less talked about is the fact that enslaved people brewed beer for each other, not just for slave owners. A good friend of mine once pointed me to page 644 of the book Roll, Jordan, Roll: The World the Slaves Made by Eugene D. Genovese. On that page is a recipe for beer that may have been a staple amongst enslaved people in southern states. The beer was made using persimmons, sweet potato peelings, cornbread, and water. Regardless of this beer’s potential popularity at the time, this style is difficult if not impossible to come by in today’s taprooms, which are overrun by what we’ve deemed to be the craft beer status-quo: European styles such as IPAs and Pilsners.

Black people were not only historically brewers in the U.S., but the beer drinkers who visited taverns and saloons were also more diverse than we’ve been led to believe. Chapman and Brunsma assert: “Black people and Native Americans were often inside taverns in early America – we just do not yet know much about it, though we should. Historical records inhibit our ability to understand or even see Native Americans inside the tavern as such activity often went unrecorded because selling to Native Americans was illegal” (39).

A huge part of changing today’s perceptions of the American beer scene is “uncovering the stories that have been made invisible, lost, or covered up by the ever-present white drive of and writing of history,” to quote Chapman and Brunsma once more (43). As we chip away at these hidden histories and discover that Black communities were indeed a critical part of beer’s story in terms of production and consumption, we have to ask ourselves, how then did we get here? Why do we have such low national numbers when it comes to Black people, and minority groups in general, in the craft beer industry? Overall, it’s due to a lack of representation.

As Chapman and Brunsma put it, “According to our interview data, the issue of representation – at all levels of production, distribution, and consumption – is a major barrier in preventing black, other minority, and female participation in craft beer and its cultures” (103). And one of the main culprits of this type of exclusion is a historical lack of representation in post-Prohibition beer advertising.

After Prohibition ended, the number of breweries in the U.S. continued to dwindle into the 1960s and 1970s until there was only a fraction of what we’d had prior to Prohibition. Of this relatively small number of operating commercial breweries, all were white-owned and they largely produced the same type of American lager. When advertising their product on a mass scale, breweries did not make efforts to reach the Black community. In writing this, it makes me think of an episode of the Planet Money podcast I listened to where the host interviewed Tom Burrell, a Black advertising pioneer. Burrell brings up an ad for Schaefer’s beer that appeared in Ebony magazine in the 1970s. An image search for this ad reveals a picture of the beer next to the phrase, “1842. It was a very good year for beer drinkers.” Burrell points out what Shaefer’s should have already known about the ad, “…it just screamed insensitivity, screamed insensitivity. It was a horrible year for us.” Find the full episode and transcript here.

If breweries were not advertising their typical beers to the Black community, what were they advertising to them? To be frank: garbage. Garbage in the form of malt liquor. Especially in the 1970s and 1980s, Chapman and Brunsma’s research shows, “…in addition to highlighting the ‘cheap high’ of malt liquor, advertising campaigns were tailored to specifically target black males and their sensibilities” (114). The ways in which advertisers constructed a narrative around malt liquor made it so, “In effect, the ‘choice’ of malt liquor is a forced option that limits the buying power, and the available cultural capital, of black beer drinkers” (Chapman and Brunsma, 121). Chuck D of Public Enemy summarized the problems with malt liquor being pushed on the Black community when he said, “It’s fucked up beer, with more alcohol. Instead of making people laid back, it makes them hostile. And it leads to a lot of black on black violence in America.” (Chuck D discussing his song “One Million Bottle Bags” with Melody Maker, quoted in Beer and Racism, 119).

Historically, it’s obvious that the craft beer world has a lot to contend with if we really do want the diverse beer scene we claim we do. Because of that, I’m sure at this point you’re asking what you can do to help foster the change discussed at the beginning of this article. With lack of representation in the craft beer industry being one of the main issues working against diversity, it is critical to intentionally create space for the Black community and minority groups in beer production, distribution, and consumption.

For brewery-owners and beer distributors, this means hiring more people of color to brew beer, serve beer, and distribute beer. It also means being aware of cultural appropriation and racism in the marketing of your beer. If you’re a white brewery-owner, one interviewee from Beer and Racism named Tony urges you to ask yourself your intentions in using certain beer labels and/or beer names that reference Black pop culture (for instance Hip-Hop): “If you’re doing it just to sound cool and sell more product, but not actually empower the actual culture that you’re taking from, then it’s not okay” (128). He also contends, “Naivety is no longer an excuse” (162).

For craft beer drinkers, who really have been the driving force behind trying to make the beer industry more diverse, one of the best things you can do to create space in craft beer, in my opinion, is not be a beer snob. Don’t make others feel inadequate or undeserving of beer just because they don’t know as much as you do. Remember the ability to enjoy craft beer does not have to be earned – it is for everyone. Be inclusive.

One last tip, Chapman and Brunsma recommend following the hashtags #newnarrative and #somethingsbrewing as, “These hashtags are used to highlight the ways in which social media influencers and brewers are making progress in diversifying the craft beer industry and culture” (172).

I know this article is on the lengthy side, but in terms of food for thought, this is merely a crumb. If you found this crumb hard to swallow, I suggest re-reading this article with a beer in hand until it goes down more easily. Then continue reading, researching, listening, and helping to create diversity in craft beer and never stop.