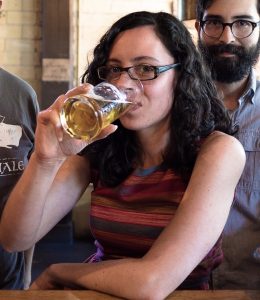 Photo courtesy of the Beer Museum

Welcome to our new series "Beer with Gin" where we hear from local beer expert Virginia (Gin) Benavidez, co-founder of The Beer Museum (and most recently the hostess with the most-est at the Austin Beer Guide Best of 2019 Party) to discuss the origin of the Winter Warmer.

Winter warmers are a bit odd because, as a beer style, they're not very well-defined. In fact, the Beer Style Guidelines released by the Beer Judge Certification Program has listed different winter warmers as examples of "British Strong Ale" as well as "Winter Seasonal Beer". This shows that the winter warmer "style" has become a catchall for any beer that's strong, amber/dark(ish) in color, and/or spiced. That narrows it down, eh?

With such a broad spectrum of solstice suds, it's hard to pinpoint exactly when the style originated, but luckily, the name does give us a clue where to start. Winter warmers.

Not all that long ago (and sometimes still when nobody's around to judge me) beer was consumed warm during the winter months. Heating up beer and adding spices to it was quite literally the hottest drinking trend for hundreds of years. If that sounds weird and gross to you, then you're probably wondering, "Warm beer? Wassail the fuss about?" And you'd be exactly right! Wassail could be one potential origin for winter warmers.

Recipes for the drink “wassail” vary, but in general, making wassail involved adding sugar and spices to a strong ale, heating it up, topping the warm beverage with pieces of sliced toast, and serving the concoction out of a big bowl. In addition to sugar and spice, other recipes also call for fruit and eggs to be added to the beer.

The act of wassailing itself is an English tradition that dates back to the middle ages, and it is similar to what we now think of as caroling. Singers go door-to-door, and there is an exchange of gifts and wassail between neighbors. The word wassail means “to be of good health” and it was used as a well-wishing winter greeting that eventually became a toast amongst wassail drinkers. Speaking of toasts, the toast that floats atop wassail is supposedly the reason we call our alcoholic declarations “toasts” in the first place. Wow! If that’s not the greatest thing since sliced bread that’s been toasted, I don’t know what is.

This is probably helping you make better sense of the song, “Here We Come A-wassailing,” which if you’re like me, has been a source of confusion, curiosity, mixed emotions, loud sobbing, and blind rage for many years now. Now that we’re all on a path toward understanding that’s being lead by warm winter beer, consider these lyrics from the song:

“Call up the butler of this house,
Put on his golden ring.
Let him bring us up a glass of beer,
And better we shall sing”

Knowing what we know about wassailing, my butler and I can totally relate to this verse now. Thanks, wassail!

However, wassail, as prevalent as it was, wasn’t the only warm beer drink that was enjoyed way back when. Aleberry is made by boiling beer (wassail is not boiled) and adding sugar and spices. It’s consumed hot and is also topped with pieces of toast. Lamb’s wool is similar to wassail, but roasted apples are added to the warm beer mixture before serving. Additionally, American colonists were known to drink a beverage called “flip,” which was strong ale heated up with rum, sugar (or molasses), and usually eggs and/or cream to thicken it. If somebody put eggs in my beer, I’d definitely flip, which is my only guess as to how that drink got its name.

All that being said, people didn’t always have to have a special name for their warm beer drinks, some just liked it hot! And they had a few options to get it that way in a pre-microwave world. They could have used an ale muller, which is a metal vessel that holds beer and can be placed in a fire until the beer reaches the desired temperature. There was also a tool called a loggerhead, which was basically a fireplace poker, but not pointy. It could be left in the fireplace to heat up, and then the hot end would be submerged into the beer to heat it up, consequently making a lovely hissing sound that’ll convince you for a second that your drink knows parseltongue. Sadly, I can attest that it does not.

Eventually, brewers and brew drinkers found that instead of adding spices, sugar, fruit, eggs, toast, etc. to their fully-fermented beer to create warm winter elixirs, they could actually incorporate those flavors during the brewing process. Thus brewers created wonderfully spicy, sweet, dark, boozy winter beers that are ready to drink straight from the serving vessel - no upgrades needed. You just have to decide at what temperature you want to drink your winter warmer. Good luck!