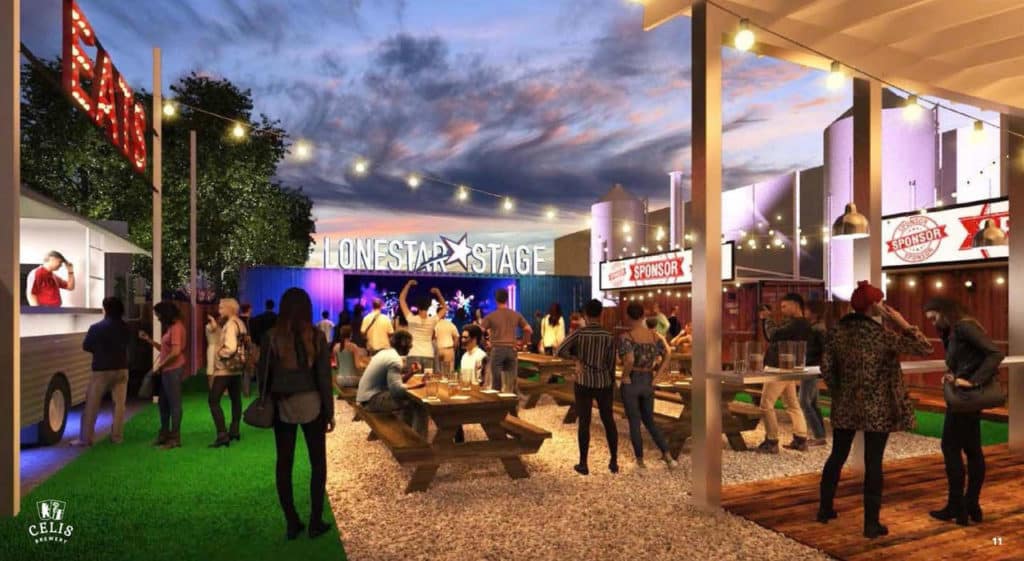 AUSTIN, Texas (October 29, 2018) — Celis Brewery is changing the face of entertainment in North Austin with the opening of its new Beer Garden & Live Music Venue slated to open before the end of 2018. This major live music and special events outdoor venue has the capacity to host up to 2,500 people for concerts and events year-round.

Celis Brewery is at the epicenter of what has been coined “Austin’s Beer Mile District,” a new hot-spot in the heart of north Austin, just south of The Domain, that is now home to several of Austin’s most popular craft breweries. Locals and tourists are drawn to the area for the vibrant beer scene.

“In the 1990s, Celis Brewery was well known for hosting huge concerts with some of the best bands in Austin,” says Christine Celis, founder of Celis Brewery. “We are reviving that part of our heritage with the opening of this incredible Beer Garden & Live Music Venue and plan to host more than 50 concerts and events here in 2019. We are also going to re-introduce our annual Celis Fest as well. The beer garden is adjacent to our 22,000 square foot brewery and Copper Kettle Taproom, making it a perfect place for larger-scale beer events too.”

The centerpiece of the Celis Beer Garden & Live Music Venue is a mobile stage on wheels, which allows the venue to be customized to accommodate large events and tailored for intimate events as small as 100 people. The facilities are built with a professional sound and lighting system for the best concert experience featuring local, regional and national artists. The venue includes a dog-friendly patio with communal-style flexible seating, and an outdoor bar with Celis, Uncle Billy’s Brewery, Pedernales Brewing Co., and Robert Earl Keen beers on tap. The family friendly venue will feature food from some of Austin’s best local food trucks and retail pop-up shops.

In addition to live music, the Celis Beer Garden will host large scale outdoor events such as the annual Celis Anniversary party, corporate and private events, and seasonal and new beer release parties. The close proximity to the planned Major League Soccer stadium at McKalla Place makes it an ideal location for pre-game and post-game celebrations.

Celis Brewery created a Membership Program to provide Celis fans with exclusive experiences in the Copper Kettle Taproom, and the Celis Beer Garden & Live Music Venue. People can choose from five different levels of membership, with the two top-tier levels providing access to an exclusive VIP area in the Celis Beer Garden.

The membership levels include:

Celis Bronze Member — $500 for an annual membership and is limited to 250 people a year. Bronze membership includes two passes to all ticketed music events in Celis Beer Garden, including Celis Music Fest, and 15 bronze tokens, redeemable for complimentary beers at Copper Kettle Tap Room or Celis Beer Garden among other perks.

Memberships are annual based on the Calendar year and are prorated during the month member joins. Celis Brewery is currently running an Early Bird Special. Memberships purchased in 2018 will be valid for the remainder of 2018 and the entirety of 2019. A full list of perks and sign up forms is available at http://celisbeers.com/membership.

Celis Brewery, founded by Christine Celis in Austin, Texas, brews Belgian-style ales and other beers, including the original witbier that Pierre Celis brewed in Hoegaarden, Belgium. The brewery is an extension of the Celis family legacy and builds on the award-winning craft beer heritage for which the family is known. Connect with Celis Brewery on Facebook, Twitter and Instagram.