In a country where tradition is very strong and the challenge of change seems imminent, Cervecería Calavera (aka Calavera Brewing) founder and brewmaster Gilbert Bjørn Nielsen is producing a variety of complex beers rich in flavor and labeled with symbols from Mexico’s colorful history.

Gilbert is originally from Denmark; he immigrated to Mexico with his parents as a young child. Later on as an adult he returned to Denmark where he studied at the Technical University of Denmark. There he earned his degree as a Chemical and Biophysics Engineer prior to his permanent return to Mexico, where he has established his residence and aggrandizing brewery. 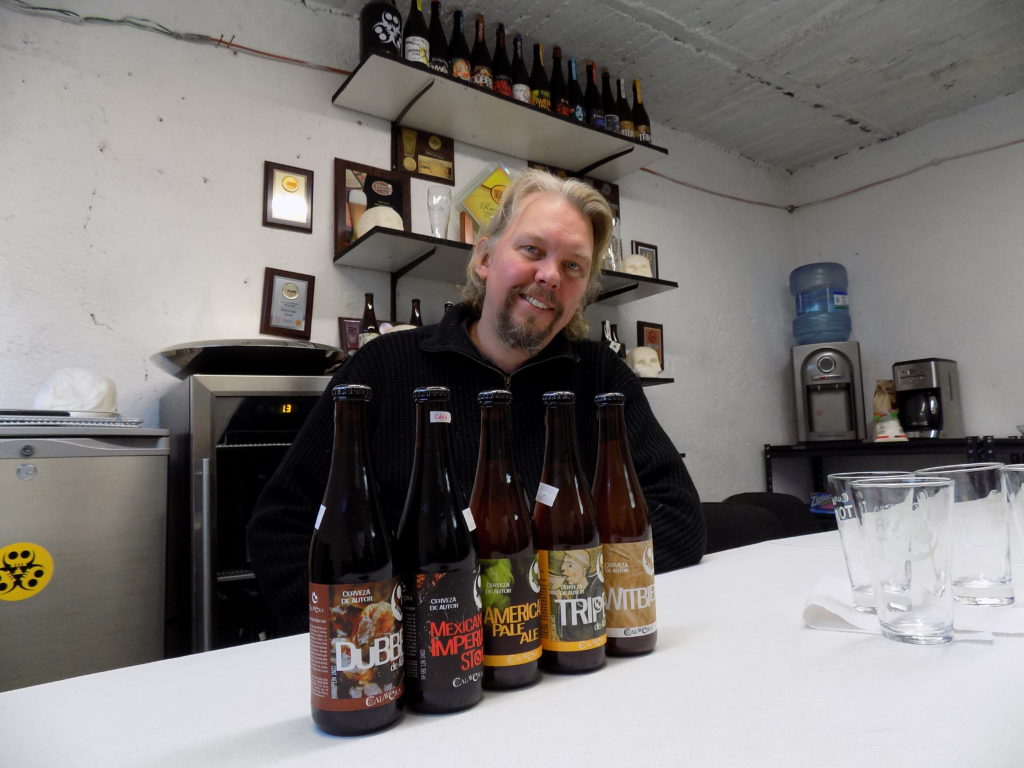 Gilbert, 44, towered over us at about 6’4”, his Nordic features stood out with blonde hair and blue eyes. He sported a big smile as he showed us around the brewery that originally produced 100 to 200 liters of beer annually. By 2010, he was producing 25 barrels with a 50-barrel fermenter. Today he has six fermenters, and he estimates that in 2016 he will be able to triple his production. He currently produces about 1,200 hectoliters or 1,000 barrels.

Cervecería Calavera was formed in 2008.  The brand embraces the Mexican tradition of giving sugar skulls as a symbol of death and reincarnation. His wife Elizabeth, a graphic designer he met in Denmark, was born in Mexico.  Elizabeth is the main designer of the labels used on Calavera beer. Calavera’s always growing production currently has five signature creations as well as specialty and seasonal beers.

Gilbert opened the tasting room exclusively for us, and we were sincerely impressed by the whole idea as an art form. I mean the facility was immaculate, the beers were incredibly delicious and unique to the taste, and even the labels on the bottles are little masterpieces of original art I would consider collecting! 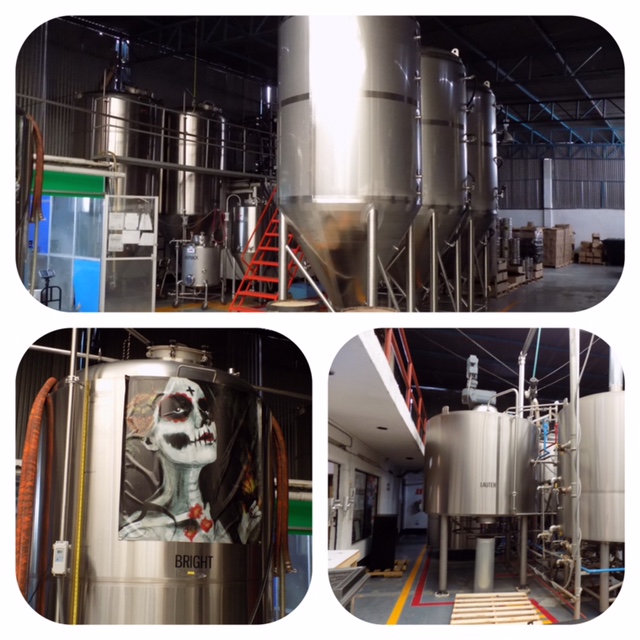 The sugar skulls used in his beer are iconic and stand for fertility and reincarnation. “Death is not necessarily a bad thing in Mexico, it means change, something new, a rebirth, which is what Calavera is all about, a rebirth of the beer industry”  he explains.

There were 10 well known microbreweries in Mexico City in 2008; today there are 78 formalized breweries with around 400 working their way into the market.

The Beers We Tasted: 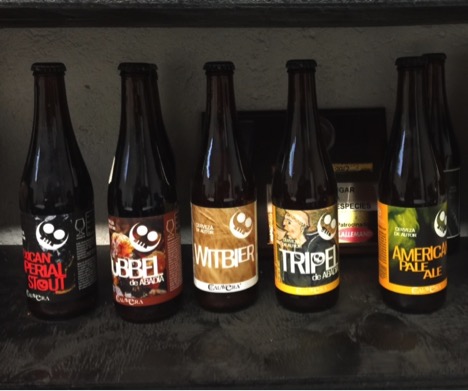 Witbier: This is a wheat beer, very yeasty, crisp and light, a little sour in taste with a dense and creamy foam, unfiltered, cloudy, gold in color, with tasty accents from coriander and American Hops. This beer has an ABV of 4.9. Gilbert recommends pairing this beer with light seafood dishes such as ceviche, sushi and maki.

American Pale Ale: This beer is highly fermented, has an amber color and dense creamy body made out of American Cascade Hops. It is citrusy and fresh with a hint of orange. The ABV is 5.4, and he says it pairs well with traditional Mexican dishes, spicy and Indian food and barbeque.

Dubbel: This classic 6.9 ABV Belgium style is rich in malt, dark with a caramel color like foam. It has subtle notes of fruit and if aged for a few months would result in a heavier taste similar to what a port wine would look and feel like. It has a touch of bitterness; it is made to sip slowly, well paired with grilled meat and steaks.

Tripel: Another Belgium style with three times more malt and comparable in body to what a white wine pairs with. At 8.5 – 9 ABV, it is cidery in flavor and a bit sweet with a beautiful light golden color. The bitterness is like an added note; it shows up there for a little bit with such a light body, but it is barely perceived among the balance of malts and hops.

Mexican Imperial Stout: This is a dark and strong tasting beer with a thick consistency you cannot see through. Intense notes of caramel, raisins, dried fruit, vanilla, cinnamon, and the highly toasted malts come to your palate with easily recognizable coffee and chocolate flavors and scents. The ABV is 9.0 and this beer has added chili peppers that make the taste incredibly unique and added a dimension of flavor. A lot of different spices are used to make this beer, it has different peppers like ancho, morita and chipotle and about 22 pounds of these chilies are added to produce 25 barrels of beer. The addition of the peppers is done late in the process without overpowering the end result. Mexican Imperial Stout is Calavera’s signature creation and represents 40 % of all of their sales.

This beer is recommended to be paired with any complex meal such as mole and chiles en nogada. In my opinion this is an exquisite well balanced beer in aroma and flavor and the best use in chili peppers I have ever tasted in a beer. 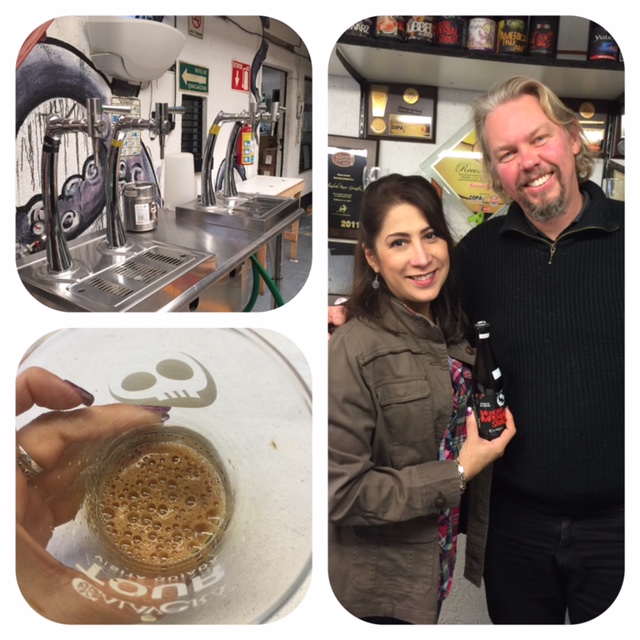 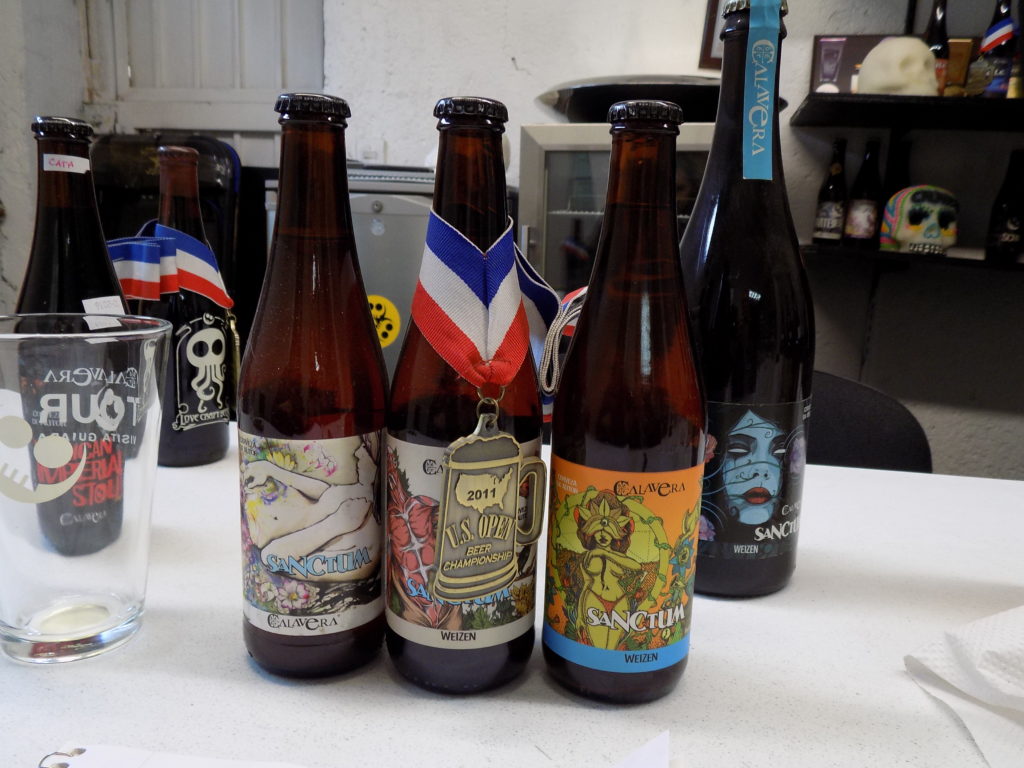 Ofrenda: In English this means “offering” and was specifically brewed for the Mexican holiday “dia de los muertos” (Day of the Dead) Gilbert told us this is an extra strong version of the Tripel beer. It contains sugar skulls, pumpkin and cinnamon. Sugar Skulls are typically given as a gift on the Day of the Dead to wish good luck.

Yule: This beer is brewed for the Christmas season, contains hawthorn fruit and sugar cane.

Sanctum: This is their Spring beer, it’s a German Hefeweizen that contains a big leafed plant called “Hoja Santa” and nutmeg.

Calavera Brewing offers guided tours every other weekend. Price varies depending of what’s offered in the tasting which usually consists of meals that pair well with their beers. Beer can be purchased from the brewery every Friday by the bottle or in growlers on site. Beer also is offered at some selected places in Mexico city.

Here in Austin I have been able to find their beers in selected HEB, Whole Foods, Central Market, World of Beer, Bangers, Flying Saucer and WhichCraft. 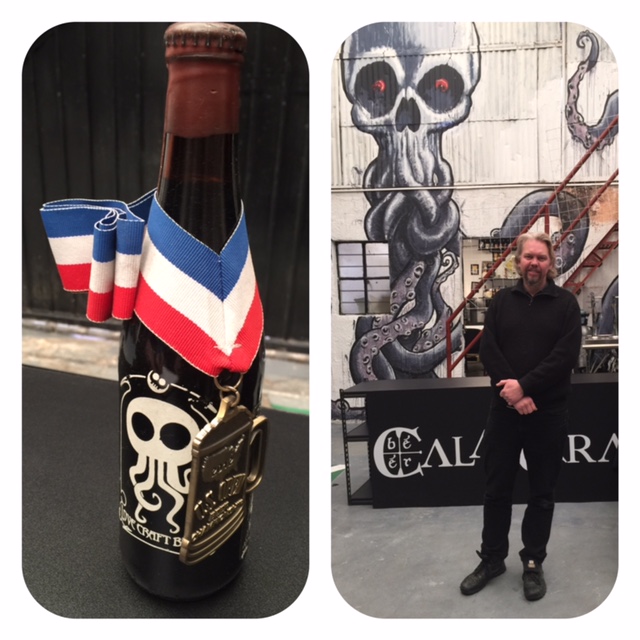