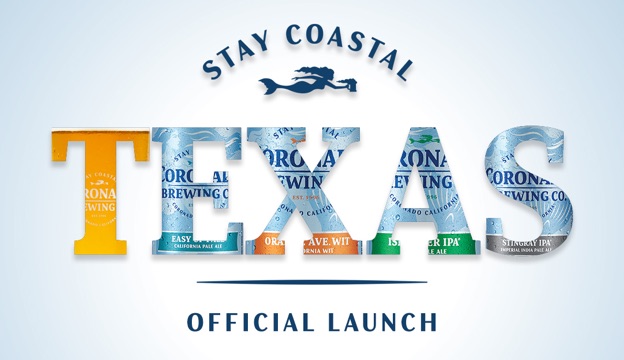 This partnership marks Coronado’s first steps into the Texas market. “We’ve seen the Texas craft beer scene grow exponentially over the past few years and we’re excited to share our beer with a savvy, new audience. San Diego and Austin share a lot of similarities when it comes to appreciating the best life has to offer—and doing it your own way—and we think our brand will resonate with Texans,” says Bandon Richards, COO, Coronado Brewing.

After the initial draft-only rollout, Coronado will expand its Austin presence with 12oz can six packs, as well as specialty 22oz bottles. “Brown Distributing has deeps roots in the Austin beer market and we know they will be an excellent steward of our brand as we launch in this highly competitive landscape,” says Richards.

This marks the nineteenth state for Coronado’s growing distribution footprint. Despite growing at a double-digit pace for twenty years, the company takes a measured and steady approach to its distribution in new markets. “We don’t need to be everywhere,” says Richards. “We want to be strategic about our growth, and who we partner with. We’re optimistic about the demand for our beer in the Austin market, and we’re excited to have Brown Distributing debut our brand in Texas.”

About Coronado Brewing Company
In 1996, when craft beer was still a foreign term and San Diego County was home to only a handful of breweries, the Chapman brothers Ron and Rick opened a brewpub in their hometown of Coronado. Today CBC stays true to their San Diego roots, brewing abundantly hoppy West Coast-style ales, which are available today in 19 US states and twelve countries. In addition to the long-established pub in Coronado, the company opened a tasting room inside their newly built San Diego production facility in early 2013, and a tasting room and restaurant in Imperial Beach, California in 2014. Coronado Brewing Company was honored in 2014 with one of the brewing industry’s most prestigious awards—World Beer Cup Champion Brewery and Brewmaster for a Mid-size Brewing Company.