Since shutting the doors on its original space in late February of 2022, Hi Sign Brewing is slated to unveil its stunning new 13,000-square-foot taproom and production facility in East Austin this weekend! Not only will this help ring in their fifth year of business, but also celebrates the resiliency of the Austin beer community and its loyal fans! As Founder and CEO Mark Phillippe states, “We wouldn’t have survived the last five years without our Austin community. They sustained us over the last two years –– this new place is for them,” he adds. 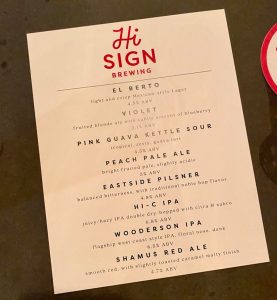 Enjoy a beer outside on their patio, or hang inside the air-conditioned taproom basking in the views of the brewhouse, colorful murals, and the company of your fellow beer lovers! Make sure to swing by the restrooms for a fun Austin-themed wallpaper moment.

What’s the History Behind this Space?

Before Founder Mark Phillippe got his hands on this industrial space, the building boasted a vibrant beverage industry history. In the 1950s, RC Cola utilized the space as their bottling facility before it landed in the hands of Texas-legend, Shiner Brewing serving as their first local distribution space. Once again, the space housed the creation of brews in the ’90s for Hill Country Brewing & Bottling. Although the space has been given a gorgeous reimagine and overhaul, when you tour the brewhouse, Phillippe proudly notes that the building was so well thought out for a beverage space that portions like the offices didn’t need to be touched at all. Focusing on showing the utmost respect to the building’s history, Opa Designs, who also crafted staple taprooms like Meanwhile Brewing, Pinthouse Brewing, Vista Brewing, Family Business, Nomadic Beerworks, St Elmo Brewing, and many more, reused original building materials as often as possible, and leaned into the existing layout, nearly two decades later.

Former US Marine Corps Infantry Officer, Phillippe returned from deployment in Afghanistan, to find a love for home brewing alongside his fellow marines stationed in California. As this love story goes, in order to dive deeper into the craft beer world, he completed related coursework at both UC Davis and Portland State University, where he studied the manufacturing and distribution of beer. He made his dream a full time reality in 2015, and opening up the first rendition of Hi Sign’s production facility and taproom officially in 2017. He quickly learned the struggles that can come from the seemingly never ending infamous 183 construction, and a pandemic to put the icing on the cake. “As the Austin craft beer market matured, it became apparent that we weren’t going to survive at our old location on Bastrop Highway, almost entirely due to the devastating, several-years-long Hwy 183 construction project,” he explains. 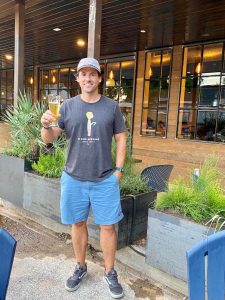 He continues, “I’ve been surrounded by entrepreneurs for a long time, and I thought I had a pretty good idea of what my future might look like — writing the business plan, building financial models, courting investors, trying to get a bank loan, etc. But, in my wildest dreams, I never could have imagined the challenges I’ve faced both personally and professionally over the last five years. It’s been an ultramarathon.”

Head Brewer, Josh Kunzli, originally from Switzerland, and a recent transplant from Chicago, IL where he was Head Brewer for Finch Beer Co, is proving a solid and talented addition! Kunzli, who has a Chemical Engineering degree discovered craft beer during college. After a stint at a local nano-brewery working part-time, he trained in a plethora of aspects of the brewing world: serving, packaging, brewing, and cellaring, and quickly climbed the ladder. He is already fitting into the Austin beer world seamlessly with his love for Lagers and classic American Pale Ales. 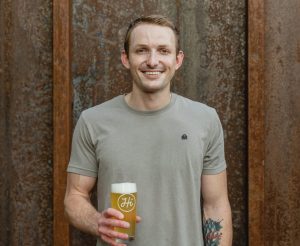 The new space’s footprint is more than twice the size of the original facility, allowing the ability to beef up production and distribution of the core beers as well as offer limited-release beverages. Phillippe anticipates an increase in yearly capacity of just over 8k barrels.

Phillippe concludes, “Ultimately, what still drives me is a sincere and genuine passion for great beer. I still get that rush when I taste something fresh out of the tank and know we nailed it…Whether it’s perfecting a pilsner or improving our IPAs, the journey will always be about making great beer.”