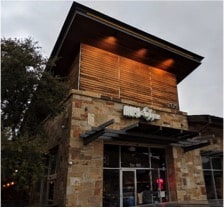 The short and sweet:

Hops and Thyme is a newer restaurant with a craft beer focus located in Lakeway. They have a commitment to an exceptional dining experience with high quality ingredients in dishes made from scratch, 36 taps of distinctive beers, wine, and excellent customer service. Craft cocktails are coming soon.

The rest of it:
If you live in or near Lakeway, find yourself there, or want a short trip to a cool location, the savvy beer lover should head over to Hops and Thyme, at the corner of 620 and Lohmans Crossing. Set in a shopping center, the year-old restaurant has a large deck to the side, covered by oak trees with cedar booths and tables. As you step inside, you can’t miss the long bar to your right with an impressive tap setup and ~15 stools. Beyond that is a bustling, open kitchen and on the left there’s plenty of tables to sit inside.

Ross, the general manager and beer buyer, greeted me from behind the bar while pouring orders for a couple groups sitting at the stools. While waiting, I listened to him educating the patrons on the different styles of beer they had on tap, explaining the highlights of the style and contrasting against beers they were familiar with. He knows and loves beer and it shows. What started out as a place to drink beer and have a little food has transformed into a quality restaurant with an emphasis on excellent beers. Given this is a beer blog, I’ll start there. 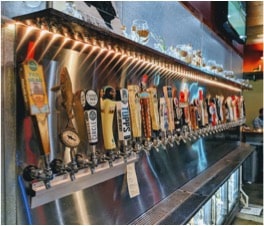 Hops and Thyme works to maintain a balance of beer styles from local, state, and national breweries set into five categories of light, medium, heavy, hoppy, and unique. On their 36 taps they have Central Texas standards like 512 Pecan Porter and Thirsty Goat Amber but, through relationships with self-distributing breweries and small distribution companies, they also have a healthy dose of rarer and low-distribution beers. You can get beers by the glass or they have pre-made flights as well as a “Roll the Dice” option, where the bartender or server picks a flight for you.

I chose to go for the “Roll the Dice” flight, twice, and my first flight consisted of Whitestone’s 8.5 Minute Abs Hazy DIPA, Hopfusion’s Feisty Blond (which tasted like churros – in a good way), ABK’s Hell Das Blaue, the only continental beer on tap, and Victory’s Home Grown hoppy lager. The second flight consisted of Spindletap’s Houston Haze, Acopon’s dark mild Homunculus (very nice), Altstadt’s Alt, and Brazos Valley’s Brut IPA. Out of the eight beers, I had previously enjoyed two of them, which is a great ratio for a beer explorer like me. Plus, I’ve been meaning to get to Acopon and Whitestone for too long now so it was nice to get some here. Other beers hail from the likes of Save the World, Last Stand, Rentsch, Blue Owl, Family Business, Tupps, Avery, Dogfish Head and more.

A unique aspect of their tap setup is that each keg is individually regulated for pressure, which means they can dial in the carbonation to match the style of beer so you get the right experience (in most other bars they run four kegs to one regulator, I had to ask). The staff is constantly tasting new beers to determine what will go on next based on customer feedback and where it would fit in the balance of styles. 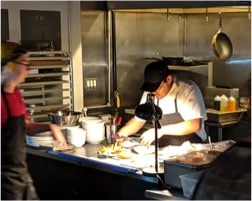 The food side of Hops and Thyme is run by Chef Nathan Pearlman, formerly of Boiler Nine and Foreign and Domestic in Austin. He tries to use as much locally sourced ingredients as possible, like Barton Springs Mill for corn meal and grits and 44 Farms beef. I brought my family to the restaurant so I could try their dishes as well. We had a 44 Farms bacon cheeseburger that had amazing beef flavor and combined the other flavors perfectly. The braised beef short ribs melted in my mouth and were served on a bed of grits that was so fluffy it was almost like custard. The kale salad with beets, goat cheese, and candied walnuts was just as expected with the tartness of the dressing setting off the sweet nuts. My son is picky, he had the house-made chicken fingers with french-fries and ketchup. The bites I had of each of these were delicious too. The one dish that didn’t light us up was the charred Brussel sprouts. They had an admirable dressing on them but were over-charred in our opinion, lacking much mass and feeling papery. To finish up we shared some tart lemon bars and bread pudding, both of which were excellent.

While the kitchen staff are snappy and the wait staff are skilled and attentive, the vibe of the place is relaxed. If you visited when they first opened, you will notice a transformation when you go again. They’ve taken feedback from their customers seriously and have changed their game. What used to be a place focused on drinks with small plates is now a sit-down restaurant with entrees and good drinks. The décor is minimal with soft, rich colors and high shelves with plants and curios. The walls are bare at the moment but pleasant, hopefully awaiting some local art. The tables are rustic wood with steel chairs and on Friday night Chris Devore was playing mellow tunes on his guitar which accented the room nicely.

Their goal is to be the best place in Lakeway and in my opinion, they have a solid ground to claim it as many customers express they’re happy they can get an Austin-quality experience near home. There was a nice cross section of people there, families with young kids, a mother and her son, grandparents with their daughter and her baby, young couples, a group of middle-aged dudes who may have just got off the golf course. It was cold the night I was there so the deck wasn’t being used by many people, however, they have heaters and blankets if you want to use it now. Once the weather warms up, I plan to head back out to relax on the patio which has misters, is covered by oaks, and trends about 20 degrees cooler than the heat outside. I enjoy the thought of drinking great beer, eating good food, and talking with friends on a cool patio, the exact sweet spot at Hops and Thyme.