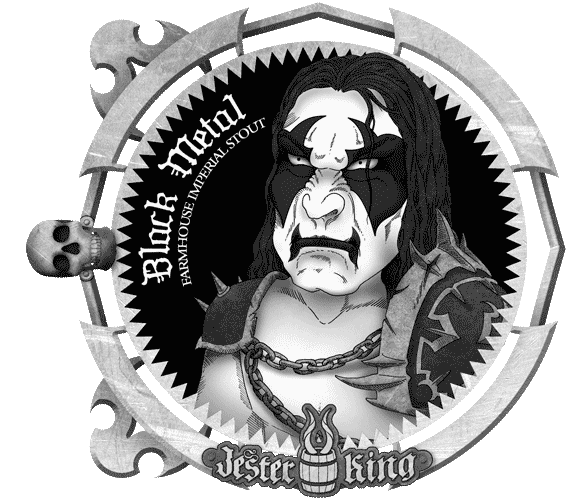 In this Cooking with Beer post, we take a 17 pound brisket and inject it with Jester King Black Metal Farmhouse Stout about 3/4 of the way through the smoke!

We started with a 17 pound untrimmed Choice brisket from Randall’s (hey they were on sale for $1.59 per pound!). Normally we use Prime briskets but couldn’t pass up this deal! 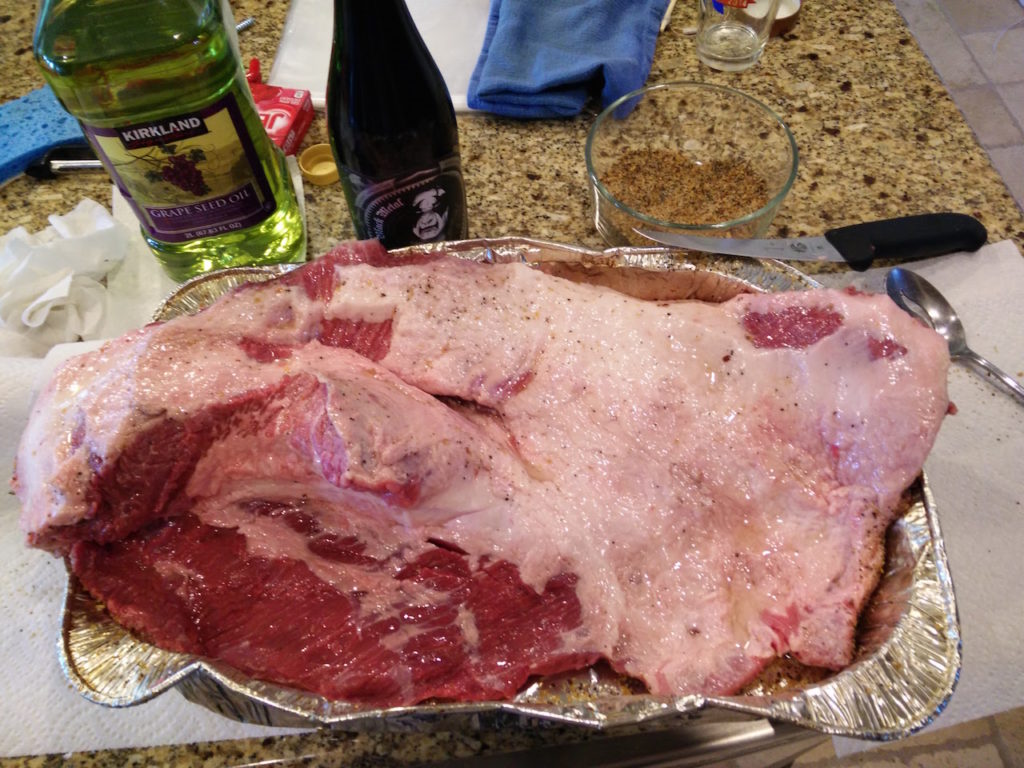 I like trimming the briskets myself and tend to leave more fat on (vs when you buy it trimmed) so it doesn’t dry out during the smoke. That said, I did wind up trimming about 2 pounds off of this brisket!

After trimming, I turn the smoker on and set it for a low smoke(150f). It will take about 15 minutes for it to get up to temp and I will season the brisket during the smoker warm up time with my “top secret” rub which consists of Montreal Steak Seasoning, garlic, cumin, chipotle and sugar-in-the-raw. (I know, not so “top secret” any more!) 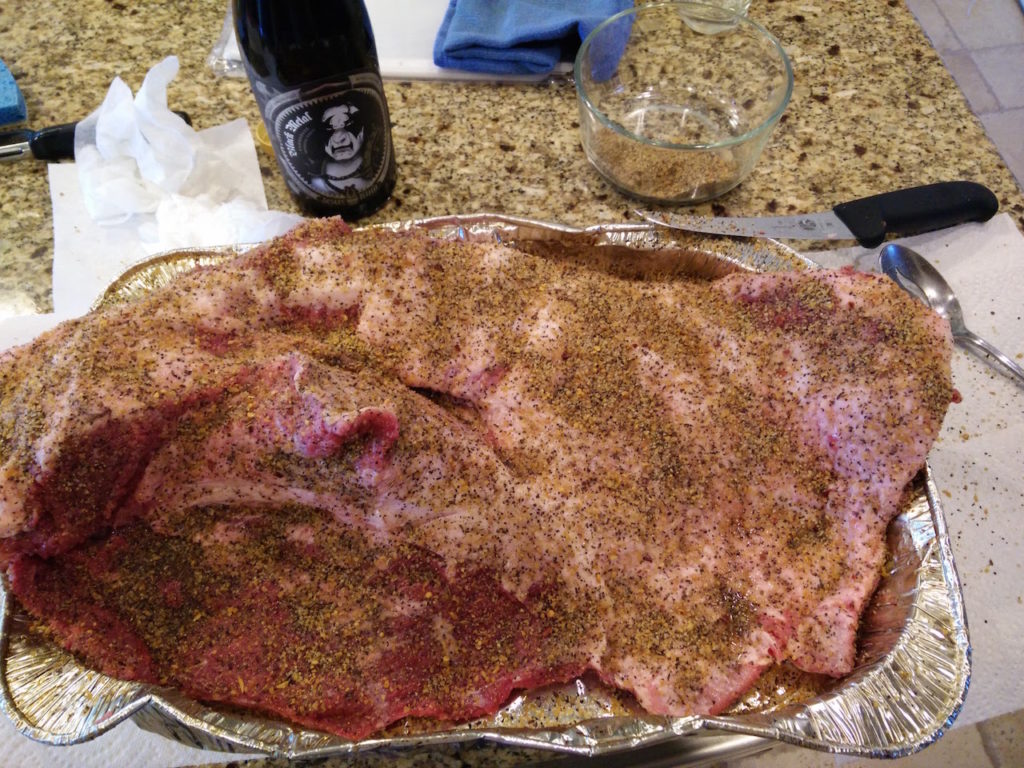 Now that it’s seasoned, it’s time to put it on the smoker. Not only do we like Beer Injected Brisket, we also put some beer in a pan below the grill for added moisture. This time we used Real Ale Brewing  Fireman’s Four. 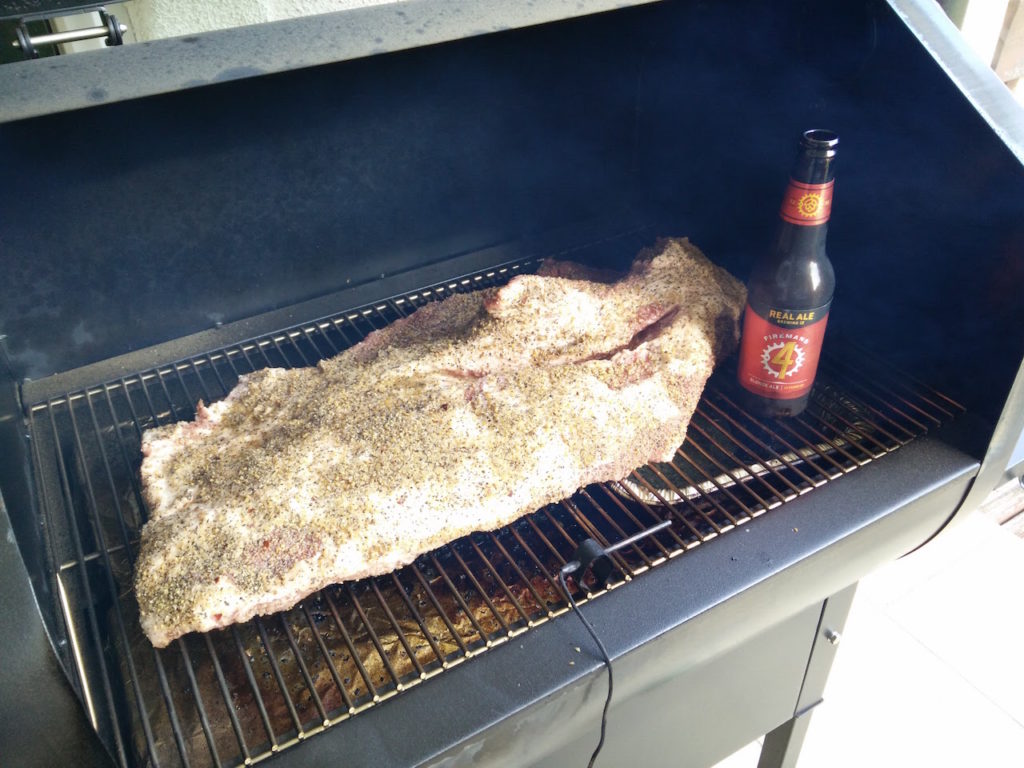 We are using a Green Mountain Grill Daniel Boone (<- Amazon Affiliate link) pellet smoker with built-in WIFI. It has a companion app for iOS and Android. The app allows you to create cooking profiles: 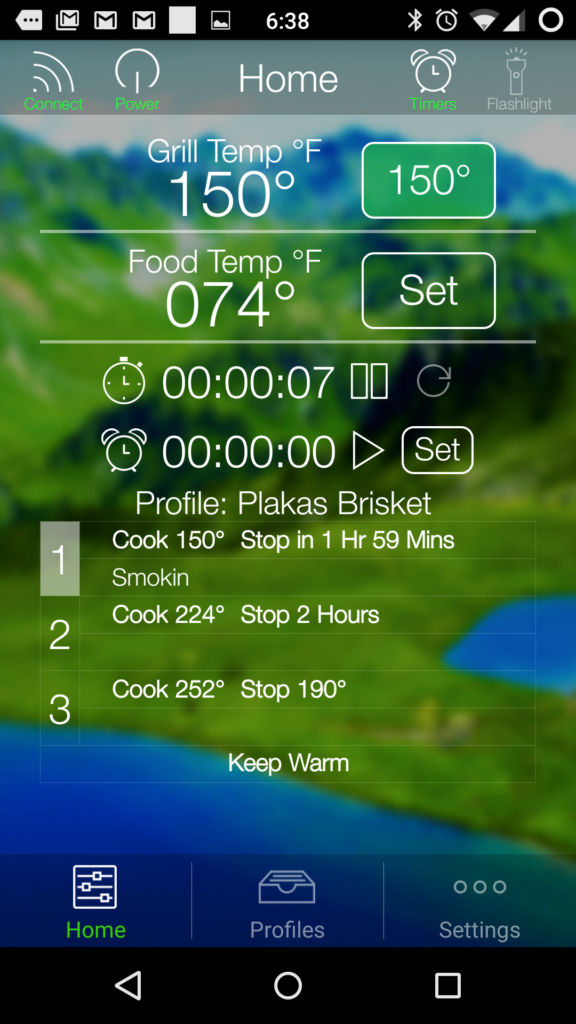 Why do I need wifi and an app in my smoker…well because I am a tech geek but more importantly because I am a crappy cook! ( I can burn water if left alone in the kitchen too long)

I also use a separate wireless thermometer(with a temp alarm) to monitor and when the internal temp hits 165f-170f, I’ll pull the brisket out.

I’ll put it on top of foil and inject it with about 6-8 ounces of beer. I inject it in about 6 or 7 different spots. Some of the beer will come out, which is why I use the foils as a “tray”. The brisket will cook in any of the beer that comes out and yours truly will drink any beer left in the bottle (or can) regardless of time of day! (Amazon Affiliate Link to the Injector I use) 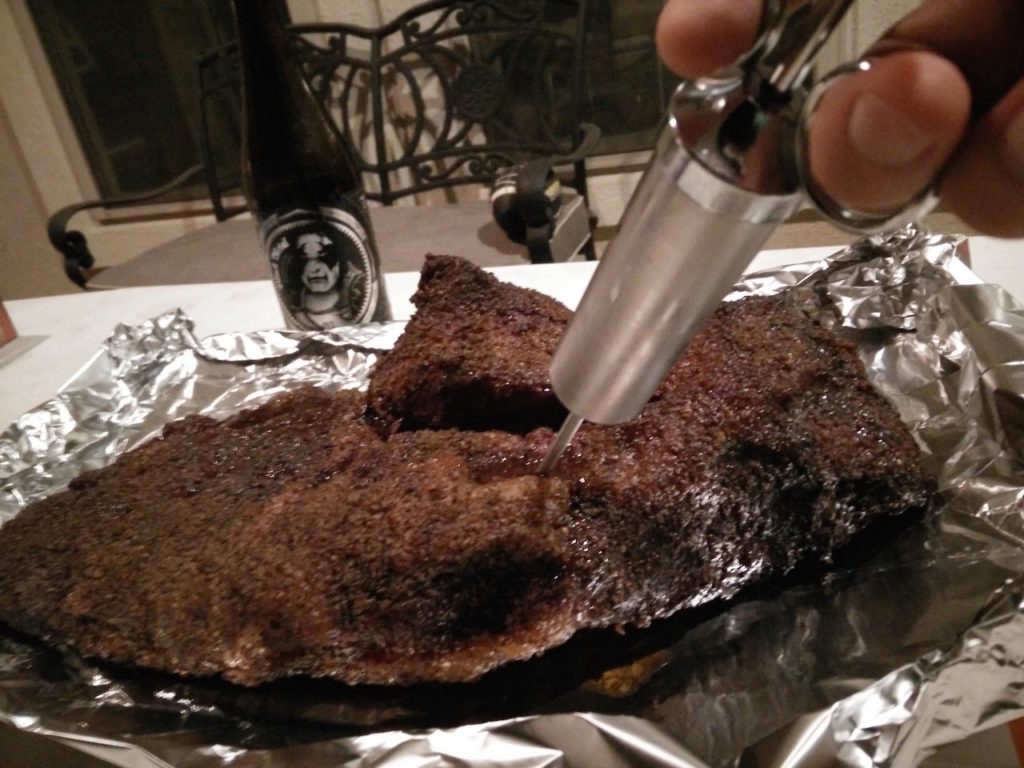 Here’s a video we did injecting a different brisket with some Uncle Billy’s Gypsy Dubbel Porter:

After the brisket internal temperature hits about 190f, I’ll take it out of the foil and put it on the smoker “naked”. I’ll fire up the temperature to 300f and leave it this way until the brisket temp hits about 200f and we do this to make it “barky”. Next, we take the brisket off and foil wrap it. It’s time to let it rest for at least an hour(2 hours is better). 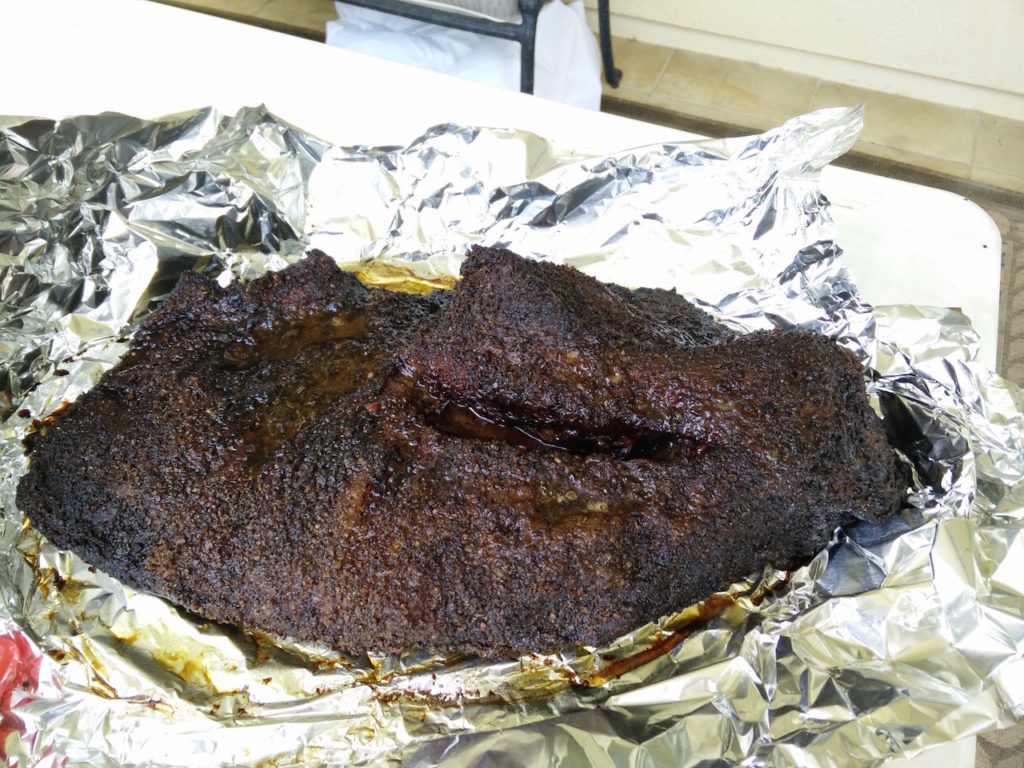 We wrapped it in about 3 or 4 towels, put it in a cooler and drove off to Jester King to share this brisket with the crew for lunch! 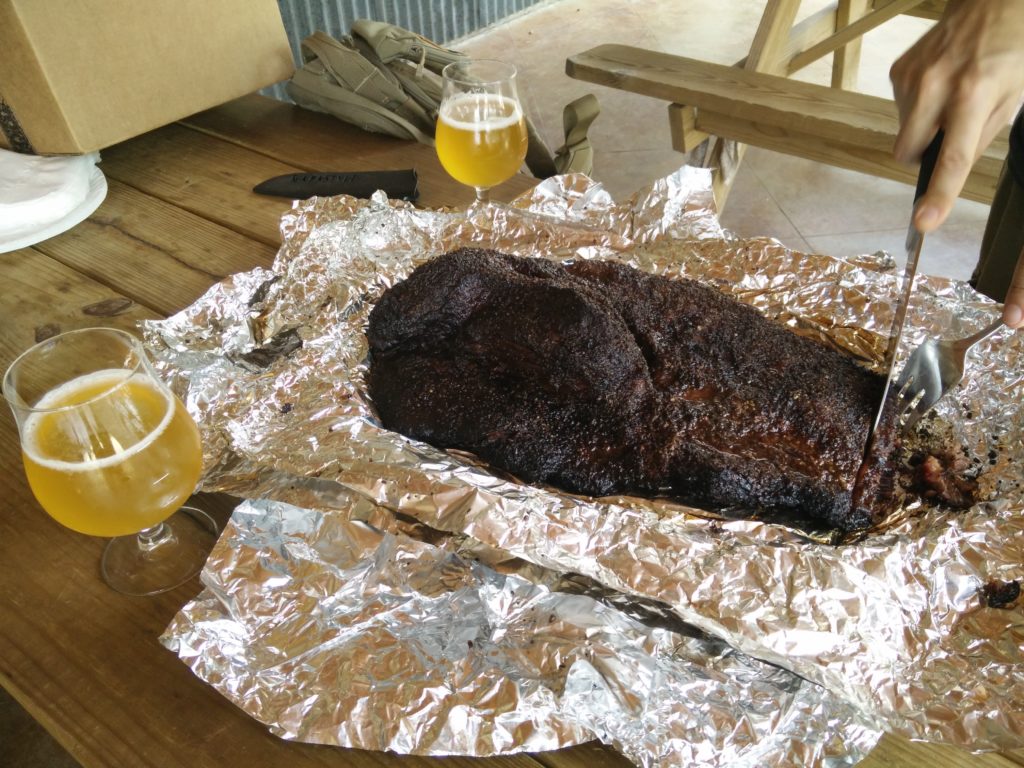 Of course, what better way to eat Jester King injected Brisket than with some Jester King beer to drink! I believe we had Bière de Miel. 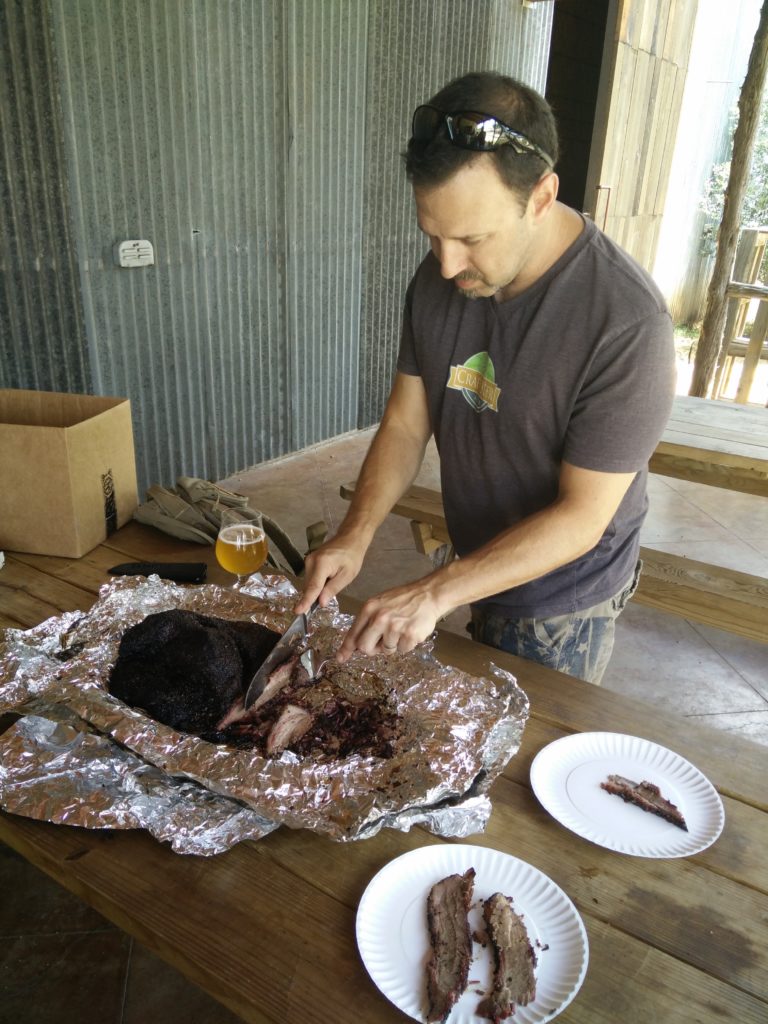 This is by far the best brisket I have ever smoked, which is a good thing when you’re feeding a hungry brewery crew! Everyone seemed to like and no one died which is a bonus!

If you have questions or tips on how you cook with beer please leave them in the comments. 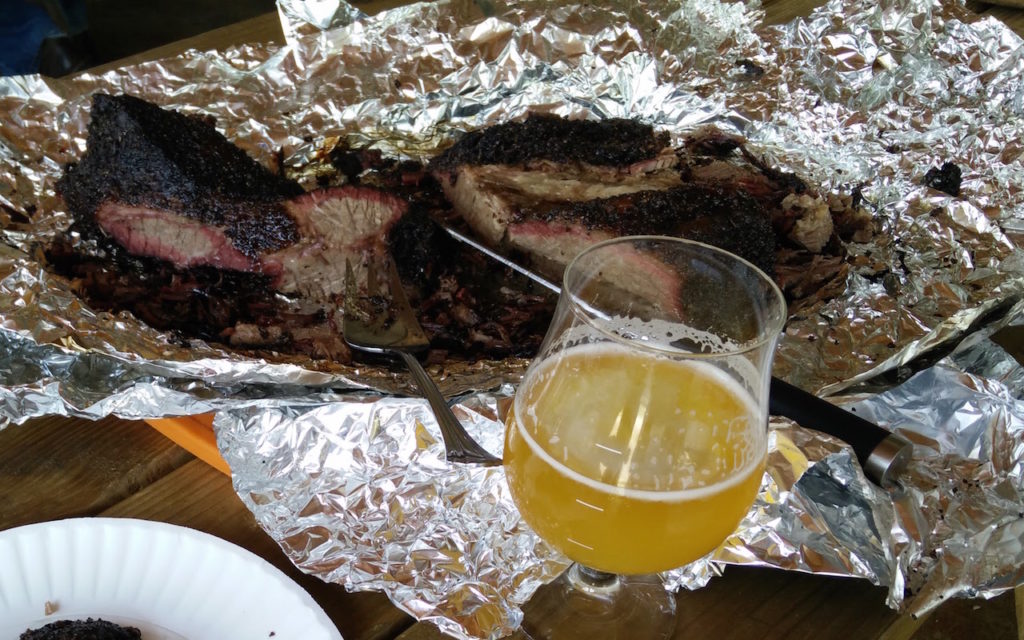