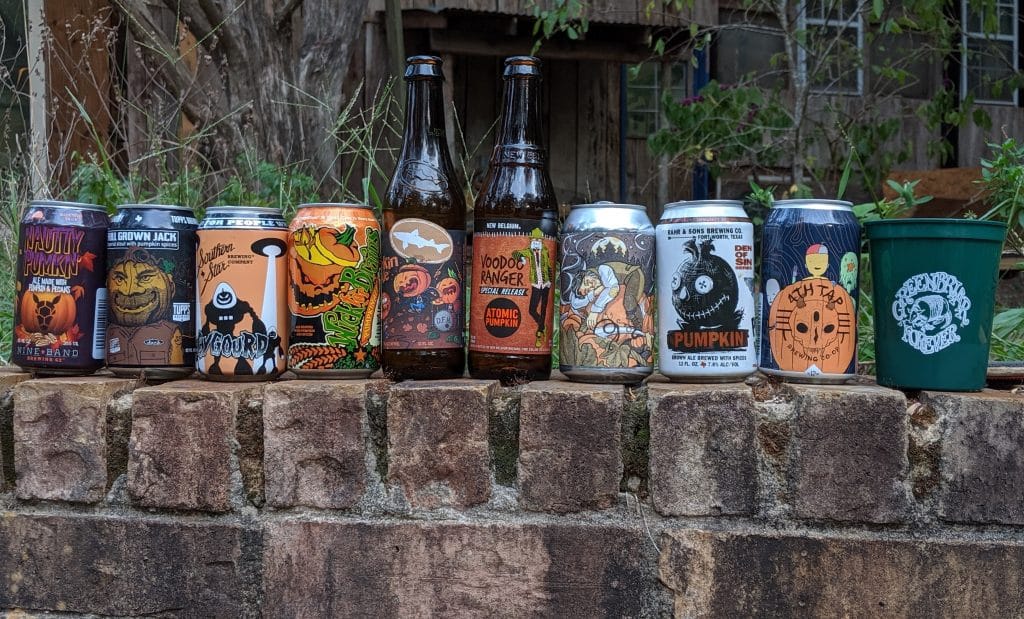 It’s the Season for Pumpkin Hold your lattes, witches!

It’s Fall in Texas and that means it’s all-things-pumpkin-flavored season and that includes our most beloved of beverages, beer! The pumpkin spice thing has a lot of people bothered, mostly because of the ubiquitous-ness of the flavoring in everything from cookies to coffee to dog treats to popcorn. There’s also the usual argument from friends that they don’t want to drink a beer that tastes like a Yankee Candle. While some of those exist, there’s plenty that taste like mom’s perfect pumpkin pie or a variation of it that are quite delectable.

I tracked down a slew of pumpkin-based beers the assembling of which took some time. Not all stores have their pumpkin beers available at the same time, and, while I generally enjoy pumpkin beers, I didn’t really want 10 six packs of them in my refrigerator so I roamed the city to hit stores that sell singles. Alas, sorely missing from the lineup is St. Arnold’s Pumpkinator, Bronze Medal winner at the 2019 Great American Beer Fest, because it hadn’t been released yet (though should be now as you’re reading this). That said, I managed to assemble a nice range of beers from across Texas and a couple from further afield. The following is the general thoughts that came out of the impromptu tasting I held at the 50th birthday party of one of the oldest intentional communities in the nation. 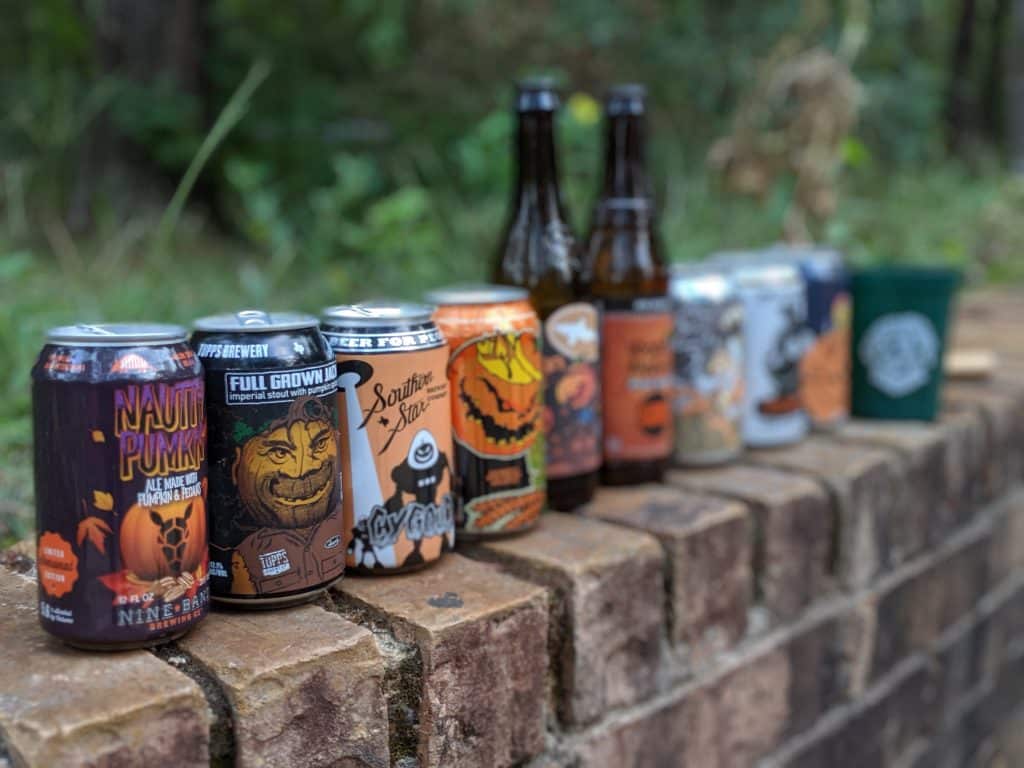 We started with a classic to set the mood right. Dogfish Head’s Punkin Ale is a widely-available, 7% ABV brown ale in bottles. It has a light body for easy drinking, mild pumpkin spice flavors and is relatively low in the “creaminess” I associate with pumpkin in beers. Overall, this is an easy drinker that isn’t too far out from what an average person would enjoy in a beer, so a good one to bring to a family gathering.

The next beer we shared was Nautty Pumkn from Nine Band Brewing out of Allen, TX. This beer is a 5.6% ABV amber ale with pumpkin, pecans, and spices. It starts out quite sweet and has a high creaminess for the mouthfeel. When it is on the colder side, there’s a lingering nuttiness that comes in on the backend which turns into a much more pronounced pecan flavor, with a little astringency, as the beer warms. Overall, this beer is a little imbalanced and might turn off you candle-haters. Nine Band doesn’t seem to have major distribution in Austin, so this may be tougher to find.

The third beer we tried was Voodoo Ranger Atomic Pumpkin Ale from New Belgium Brewing. This is a 6.4% ABV ale, brewed with pumpkin juice, Saigon cinnamon, habanero, aji and del arbol peppers. This one came out with a lot of spicy ginger (which in retrospect is the peppers), but no heat, and smelled just like pumpkin pie. We felt it was the best of the first three with a nice snap and solid flavor throughout. Chalk another one up for New Belgium’s Voodoo line of beers.

The next beer we had I’d call pumpkin-adjacent. Legal Draft Beer Co., out of Arlington, makes a seasonal lager, Fall Guy, coming in at 5.1% ABV. No pumpkins were harmed in making this beer but it does include pumpkin-y spices of nutmeg and cinnamon. This beer is light as you’d expect a lager to be, and has a nice spiciness to it that is very easy to drink. Multiple people in the group felt this was their favorite of the night and I found it very drinkable and worth another.

Southern Star Brewing jumps into the field with their Cygourd Ale, it clocks 6.3% ABV and is “half pumpkin, half machine”. Certainly the coolest can art of the lot, the beer itself was the lightest in flavor of the lineup. It has a very low creaminess to it and very light spice flavors. Drinkable, but no real wow factor in any direction.

4th Tap Brewing Co-op has teamed up with perennial favorite scare-house House of Torment to create a 5% pumpkin ale of the same name. They claim they wanted something drinkable in hotter months and they hit their mark. This beer is light in body with very low pumpkin and spice flavors. Easy to drink and great when warm or cool outside. This would be a good one for tending the smoker.

Next on the list is a recent release from 5 Stones Brewing in New Braunfels. Their Sleepy Hollow was voted “Best Name” and was my favorite so far. It is brewed with smoked pumpkin and spices and has a nice medium sweetness with lots of good spice flavor and a medium body.

After the eighth beer we cracked open I was thankful for friends to share with. Rahr and Sons Pumpkin is a brown ale with spices coming in at 7.8% ABV, the second highest of the night. This was my favorite and was for a couple others as well. It hit a perfect balance between sweetness, spice, and ale flavor without too much of any one. They are a well-decorated brewery and it shows in this beer. I’ll get more of this one.

Our penultimate beer was Wick for Brains from Nebraska Brewing Company. This is an amber ale clocking at 6.1% ABV with real pumpkin and spices. We all felt that this was our least favorite of the night. When cold it was lacking much flavor or other interesting qualities. As it warmed the flavor came out but still didn’t surprise.

We saved the biggest beer for last. Tupps Brewery’s much-lauded Full Grown series adds Full Grown Jack to the line in Fall. This is a 12.1% ABV imperial stout brewed with spices, no gourds included. I was expecting some hot alcohol at this ABV but there was none. It drank pretty easy, with the spices balancing out the strength quite nicely. That can be good or bad, depending. This ended up one of the more favored beers of the night and was a great way to close things out.

There you have it. Love ’em or hate ’em, pumpkin beers are part of the brewing landscape come autumn. With this list, you have a background to choose what might fit your palette and to reduce your risk if you’re less daring. I found them all to be drinkable but definitely had my favorites. While I may not want 10 six packs in my fridge, I’m definitely going back for more. Look for pumpkin beers starting in September and through the Fall.