1) Bluebonnet Beer Company – This is another brewery on the long list of breweries opening up in the Austin area. Bluebonnet is located in Round Rock. They have had their brewery approval for some time now, but now are starting to get label approvals for individual beers. One of the first chances you will be able to try their beer will be at Flix’s Brewhouse Firkin Fest (Nov. 9th).

2) Bull Creek Brewing Company – Along with Bluebonnet, this is another brewery that is on the verge of opening near Austin. For Bull Creek, they are located in Liberty Hill. Bull Creek will be bottling their beer from the time they open. They have received numerous other label approvals already, beginning back in April, which include a Farmhouse, IPA, Blonde, and Imperial Stout.

I should note, that along with Bull Creek and Bluebonnet, there are many other breweries that are on the verge of opening in Austin. These include Blue Owl, Last Stand, Ironsight, and Strangeland. We should have another great year for Austin area breweries.

3) Avery Rumpkin/Pump[KY]n – As many of you know already, Avery’s Rumpkin in bottles has come and gone. This weeks label approval for Rumpkin is solely for kegs, which means we may see that in keg form around town. With that said, up next is Pump[KY]n, which is their bourbon barrel pumpkin porter. This thing is quite boozy, coming in at over 17%. Since it is that high of ABV, there will be a more limited number of stores that will be able to sell it. 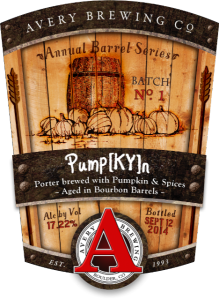