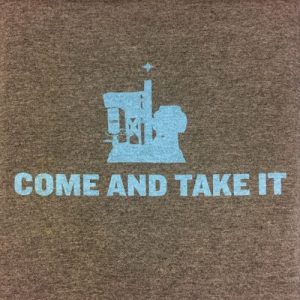 The TABC has just seized Cuvee Coffee’s “Crowler”( Developed by soon-to-be-in-Austin Oskar Blues Brewery) canning equipment and any filled Crowlers that were on premise! Despite a written warning giving Cuvee Coffee 30 days to cease illegal crowler operations on June 25 2015, Mike Mckim of Cuvee touted on social media they would continue selling Crowlers.

This has also been referred to as CrowlerGate on Twitter.

TABC is interpreting the Crowler as permanent seal manufacturing (versus a growler) which is legally limited to manufacturers in the state of Texas under current laws. One possible workaround would be a screw top Crowler which would then be classified legal, the same as screw top or flip-top growlers are now. Cuvee feels TABC’s interpretation of the law is incorrect.

Why did Cuvee Coffee blatantly ignore their 30 day warning and taunt the TABC on social media? If Cuvee stopped selling crowlers and still wanted to have the law changed, they would most likely have to wait until the 2017 Legislative session or sue the TABC like Deep Ellum is doing here for the right of breweries to sell beers to go without a specific brewpub license.

Note that Distilleries and Wineries in Texas are allowed to sell their products directly to consumers.

Now that Cuvee has been issued the violation, they will have the opportunity to petitions/protest the decision in court. We’re not lawyers and we haven’t stayed at a Holiday Inn Express but we’re guessing Cuvee has gone this route under legal guidance as a quicker way to have the law or interpretation of the law changed.

We just spoke to Mike McKim who was at an undisclosed safe house on the East Coast and he said “I will pursue resolution with the TABC and if needed through judicial means.”

Mike feels that the actual wording of law does not support TABC’s interpretation.

Already, Twitter is abuzz with negative comments towards the TABC but I think we need to do more than that and start contacting our local representatives about this issue. Whether you feel the TABC is mis-interpreting laws or just hates craft beer in general, if the law is changed TABC will have to follow it!

Cuvee Coffee had “Come and Take It” tshirts printed…and the TABC did just that!

If you want to support Mike & Cuvee Coffee you can purchase these shirts here.

Cuvee Coffee has been charged with possession of equipment or material for manufacture of unauthorized beverages after TABC auditors witnessed employees illegally canning beer without the proper permit on multiple occasions. The action comes after the retailer was issued a written warning for the same violation June 25, at which time TABC gave them 30 days to cease canning operations.

Cuvee Coffee was one of a handful of Texas retailers illegally filling, sealing and selling beer in aluminum cans, also called “crowlers.” Under current state law, only businesses with a permit to manufacture or brew beer, ale or malt liquor on-site may can their products for resale. After the original warning’s 30-day deadline had expired, representatives from Cuvee claimed on social media and in the press they would continue filling and selling crowlers in spite of TABC’s directive. These claims led to an undercover investigation in which TABC witnessed repeated sales of crowlers well after the 30-day deadline.

“We know this issue is important to craft beer retailers and their customers, and we support all citizens’ right to petition the Commission, the Legislature or the courts if they feel a provision in the Alcoholic Beverage Code is unfair,” said Dexter K. Jones, TABC Assistant Chief for Audit and Investigations. “However, we do not support the continued violation of the law just because a retailer disagrees with it. Cuvee Coffee ignored our repeated warnings and discussions, and that conduct resulted in TABC seizing the illegal equipment and subjecting its permit to a civil penalty. Other retailers who engage in illegal canning risk similar consequences.”

Possession of a crowler machine is not illegal, though using the machine to can alcoholic beverages without the proper permit is a violation of the Alcoholic Beverage Code. Texas residents who wish to report illegal canning may do so by calling 1-888-THE-TABC.