It’s that time of year again where I take a look at the Texas Craft Beer scene for 2016 and review what has happened with Texas breweries over the last year. Needless to say, Texas has come a long way over the last couple of years. Here is a breakdown of where we are currently.

A couple of notes on the numbers below:

– I have taken out any macro approval (AB-InBev, Pabst, etc.).
– These are only the approvals that came through this year.
– The numbers should be right as of 12/21 – it may change before the year’s end.

At the time of this article, there are 257 licensed craft breweries in Texas. This does not include licenses for breweries that are contract brewing or that are major macro producers.

Newcomers this year (note: not all have opened, but have TABC approval to do so):

Switched from a Brewer’s (or Manufacturer’s) Permit to a Brewpub:

While the numbers are still higher than last year’s, a good number are still switching over from brewery licenses. Along with this, a much larger number of brewpubs are now operating in Texas than breweries. If you are curious on what the differences between a brewery and a brewpub (and why places would switch licenses), you can view an article I wrote earlier on this here: Brewpubs versus Breweries: A Basic Look at the Laws in Texas

Newcomers this year (note: not all have opened, but have TABC approval to do so and I am not including ones that received approvals to contract brew at a second location):

The number of brewery approvals has actually slowed down from previous years. This does not surprise me all that much as a large percentage of the places opening are not going to be close to the production limits on brewpub licenses.

Compared to last year, Texas has actually seen a slight increase in the number of breweries and brewpubs getting approvals compared to last year. Combined, there were 60 last year, and 64 this year. I do not really see this as a big jump, but we may have reached a more stable growth rate.

Map of Breweries Approved in 2016:

Really, not a big surprise on this front. It still seems that a bulk of the approvals are coming form the DFW metroplex and the Austin/San Antonio corridor. Houston, seems to still be hanging in there, but not growing as rapidly based on these approvals. I was expecting to see more small town approvals, which I still expect to see in the form of brewpubs, but it has yet to really happen. Basically, most of the growth is just in large cities. 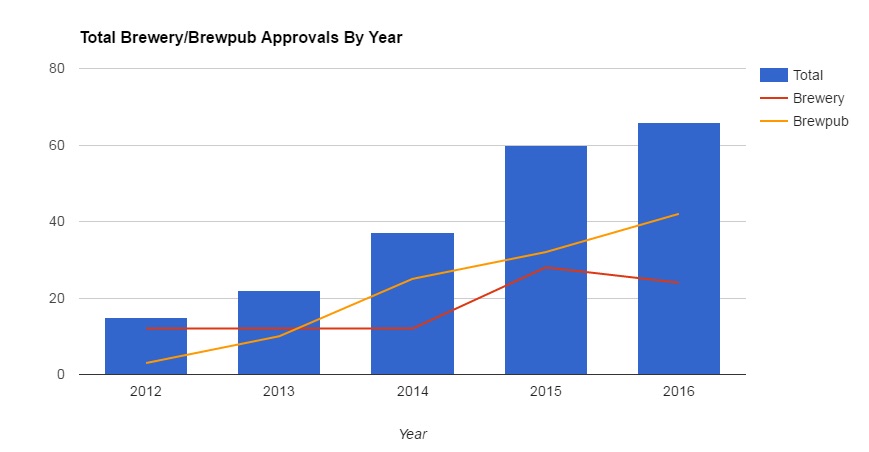 I may not have this number exact, but these are the ones that I know about.

These numbers are reminiscent of last year. Eight breweries have shut their doors this year while another 64 were approved. Last year, there were around seven shutting down with 60 getting approvals. We have yet to see any sign that there will be massive shut downs. Even with this, two of the ones that shut down have either opened up under a new name or are in the process of opening up under a new name.

The best way that I can easily put this into numbers is by using the number of breweries that are actively getting approvals for their products in Texas. So, basically any brewery that has received a label approval in each year is counted on this. This includes all of the Texas breweries, as well as macro breweries.

While label approvals are one way to look at distribution in Texas, another way is to look at who is getting approved to even sell in Texas. This year, Texas saw a number of new breweries seeking to start selling in here. These include:

What to Look for Next Year:

I am hoping for the year of great taprooms. Looking at all of the Austin breweries expanding or building new locations (Austin Beerworks, Thirsty Planet, (512), Friends & Allies, and even Oddwood), I think we may finally start seeing a taproom “culture” that other beer cities have. Being able to go to these taprooms on any day of the week will help “beer tourism” in Texas. In the past, only a limited number of places were open six or seven days of the week. In the last year, that number has increased and I expect that to continue. More and more places are opening their taprooms as basically your neighborhood hangout.

Along with this, more money seems to be being pumped into the taproom experience. If you have not seen pictures of the new Lazarus Brewing taproom, take a look. It has a great look to it and that is exactly what some places have been missing. As more money is being pumped into craft breweries, I expect to see more taprooms like this open.

Another trend is more onsite bottle releases. With places like Jester King pioneering that for the Texas market, we have new breweries like Oddwood that will continue that trend for the state. Future can and bottle releases for one off beers is going to start bringing a lot more money into smaller brewpubs around the state.

I am excited for what 2017 will bring us for the Texas beer scene.