Update: Craft Beer Austin attended the Beer-to-Go press conference at the Texas Capitol on Tuesday where Senator Dawn Buckingham and Representative Eddie Rodriguez revealed the historic agreement between the Texas Craft Brewers Guild and the Beer Alliance of Texas.

This marks the first time the Guild, who represents craft brewers, and the Beer Alliance, who represents distributors, have agreed to terms on beer-to-go sales, both signing a stakeholder agreement supporting SB 312/HB 672.

Notable during the press conference were comments made by the President of the Beer Alliance, Rick Donley, “we started looking at this as more about market certainty. We needed some stability in the beer market place and this agreement provides that. We look forward to supporting this peice of legistlation all the way through the process.”

Rally for Beer-to-Go at Austin Beerworks this Saturday from 12-5:30pm and hear from special guests Dawn Buckingham and Eddie Rodriguez, the legislative champions behind SB 312 & HB 672, the Bipartisan Beer-To-Go Bills! 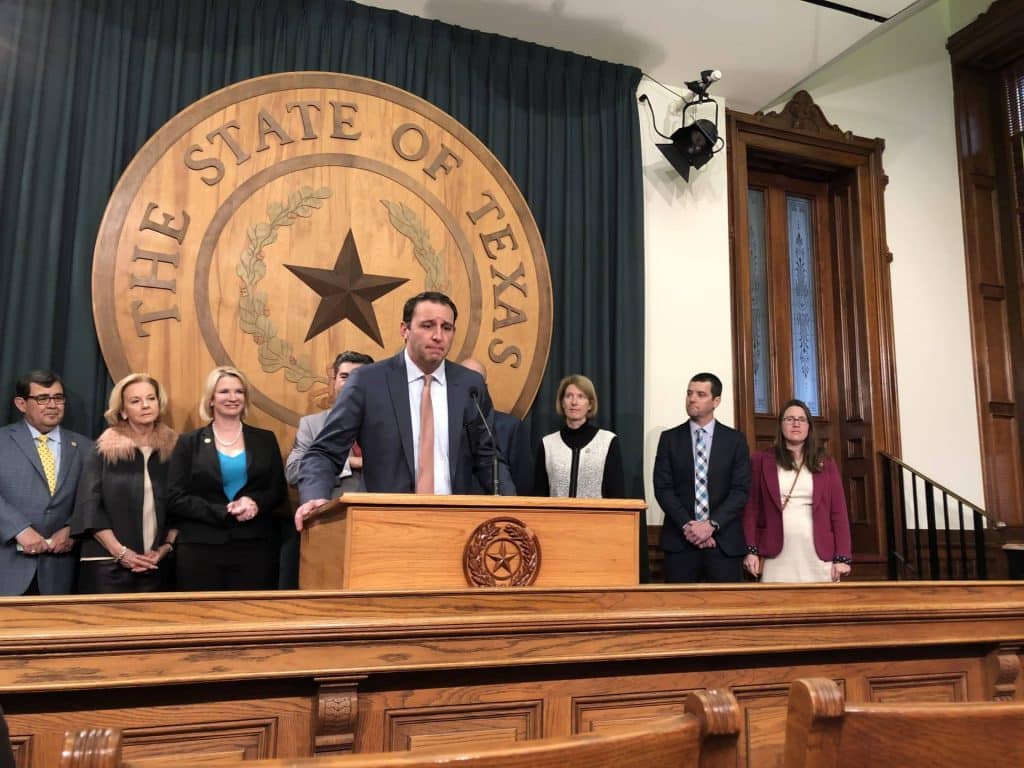 With the endorsement of both the TCBG and BAT, soon-to-be-filed committee substitutes of both bills, authored by Senator Dawn Buckingham (R-Lakeway) and Representative Eddie Rodriguez (D-Austin), would, if passed, allow patrons to purchase up to 576 ounces (two cases) of beer per calendar day from a craft brewery tasting room for take-home consumption.

“I am proud to be part of a win-win agreement for every level of the three-tier system,” Senator Dawn Buckingham said. “This is a big step forward for small Texas breweries and the consumers who enjoy their products. I am grateful to both the Beer Alliance of Texas and the Texas Craft Brewers Guild for their willingness to reach a fair agreement for both sides of this important issue.”

Brewer-wholesaler unity on the bill is bolstered by support from both sides of the aisle. At their 2018 conventions, both Texas Republicans and Democrats included support for Beer-To-Go in their respective party platforms.

“Allowing ‘beer-to-go’ sales is a common-sense issue that both Republicans and Democrats agree on because it’s good for small business and has come to be expected by consumers,” Representative Eddie Rodriguez said. “Texans are incredibly excited about ‘beer-to-go’ as the public support for HB 672/SB 312 has shown, and I am glad that the Texas Craft Brewers Guild and the Beer Alliance of Texas have come to the table.”

In an effort to foster regulatory stability for the industry, the Texas Craft Brewers Guild and the Beer Alliance of Texas have also agreed to refrain from lobbying to raise or lower allowable Texas malt beverage barrelage caps for a period of 12 years.

“The Beer Alliance of Texas has always worked to ensure a strong malt beverage market in Texas,” Beer Alliance of Texas President Rick Donley said. “We have committed to working with our friends in the craft-manufacturing segment on sensible regulations that provide for a stable and predictable three tier market in Texas that continues to be recognized as the gold standard for regulatory structures across the country.”

TCBG and BAT applaud Senator Buckingham and Representative Rodriguez’s commitment to setting craft brewers on a more equal playing field with Texas wineries, distilleries, brewpubs which are all permitted to engage in to-go sales as a brand-building, tourism-boosting opportunity.

“The Texas Craft Brewers Guild is proud to promote a sensible alcohol regulatory framework that encourages competition, consumer choice and access to market for brewers in our great state,” Texas Craft Brewers Guild Board Chair Josh Hare said. “We are excited to be working with the Beer Alliance of Texas to promote common sense regulations that ensure the beer industry in Texas will continue to thrive. We look forward to the opportunity to provide consumers with greater access to Texas made beer while ensuring a predictable and effective three-tier system.”

● Retain the 5,000 barrel cap on taproom sales.
● Allow sales for off-premise consumption in amounts up to 576 fluid ounces per calendar day, per person.
● Any product offered for sale in the taproom which does not have an approved label must post in plain view the alcohol content of that product.
● The total amount of on and total amount of off-premise sales shall be reported (in barrels) to TABC on a monthly basis. The Commission shall hold the records for public review.

So far, more than 12,000 Texans have signed an online petition urging the Texas Legislature to pass Beer- To-Go this session. People who would like to join the cause can visit www.craftpac.org/action.

ABOUT THE TEXAS CRAFT BREWERS GUILD:
The Texas Craft Brewers Guild is the not-for-profit trade association committed to advancing the common interest of Texas craft brewers. The Guild’s Board of Directors hail from craft breweries in all the major metropolitan regions of the state, as well as different brewery types and sizes to represent the Guild’s nearly 300 brewery members throughout the state, including operating breweries, as well as those that are in the advanced planning stages. The Texas craft brewing industry has a $5.28 billion dollar economic impact on the Texas economy, responsible for the creation of approximately 30,000 jobs.

ABOUT THE BEER ALLIANCE OF TEXAS
The Beer Alliance of Texas is a trade association representing malt beverage distributors across Texas, from the high plains to the coastal region to the Panhandle and West Texas to the Rio Grande Valley. The wholesale beer business employs more than 65,000 Texans with a $2.5 billion payroll, contributing almost $1 billion in state, local and federal taxes. Our members strictly adhere to today’s state-based regulatory model, including maintaining the three-tier system, while exploring new technologies and marketing to better serve the interests of Texas retailers and consumers in the malt beverage industry.