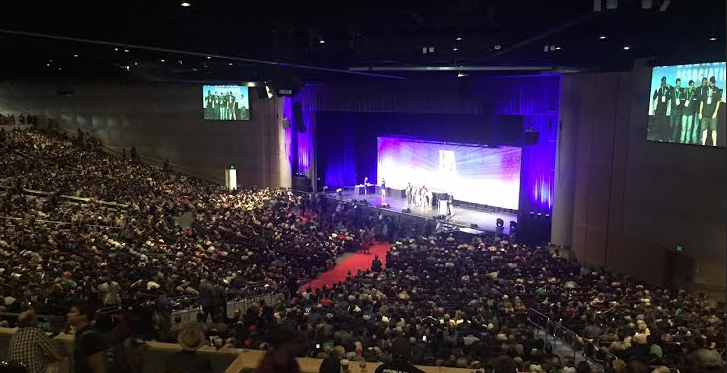 Another year has come and gone for the Great American Beer Festival. For those who have never been, it has turned into a week long party for craft brewers and fans in Denver that ended Saturday.

This was my first year to be able to attend the award ceremony which took place on Saturday morning. Basically, it consists of a couple thousand breweries and media overtaking the 5,000 person Bellco Theatre in the Colorado Convention Center. After two sessions of GABF already in the books, a 10 AM start can seem a little rough. Luckily, there was a lot of coffee, breakfast burritos, and beer going around during the event.

There were 92 categories ranging from American Style-Wheat Beer to Historical Beers and Wood-and-Barrel-Aged Sour Beers.

The number of entries per category ranges from twenty to a couple hundred. The total number of beers submitted to the festival was 6,647 from 1,552 breweries across the United States.

This year, the state of Texas brought home 15 medals!

They are as follows:

While the medal total went down over the last year, the number of golds that Texas brought home increased. Along with this, the competition each year is getting tougher. There was a 20% increase in the number of entries, while only 3 more categories were added.

Here are the numbers of golds over the same time period:

As far as where Texas placed as a state, they finished with the fourth best haul of medals out of all states. This is the same position as Texas did in 2014:

Indiana, Virginia, Ohio are all newcomers on the top 10 list. While Texas received one less medal than last year, Colorado and Oregon both had 3 less this year while California gained 21 medals from 2014.

It is also interesting comparing the numbers of breweries in each state to the number of medals won. I generally use the Brewers Association numbers for this, but they will may not be exact as they are only updated once a year.

Over the last couple of years, Texas has been rapidly growing with the number of breweries in operation. While I know the Texas brewery number is a bit lower than what we have today (by easily in double digits), so are the numbers for just about every other state. With that said, Texas continues to preform at a higher level than the numbers say we should. All it really means, though, is that we are making great beer in Texas. We will continue to have great beer, and the scene will only get better.

On one last note, I have to give a shout out to Flix Brewhouse. The Round Rock based brewpub’s Indianapolis location received a silver medal for German-Style Altbier with Generation Alt. While it is not a Texas brewed beer, it is Flix’s first medal from GABF.