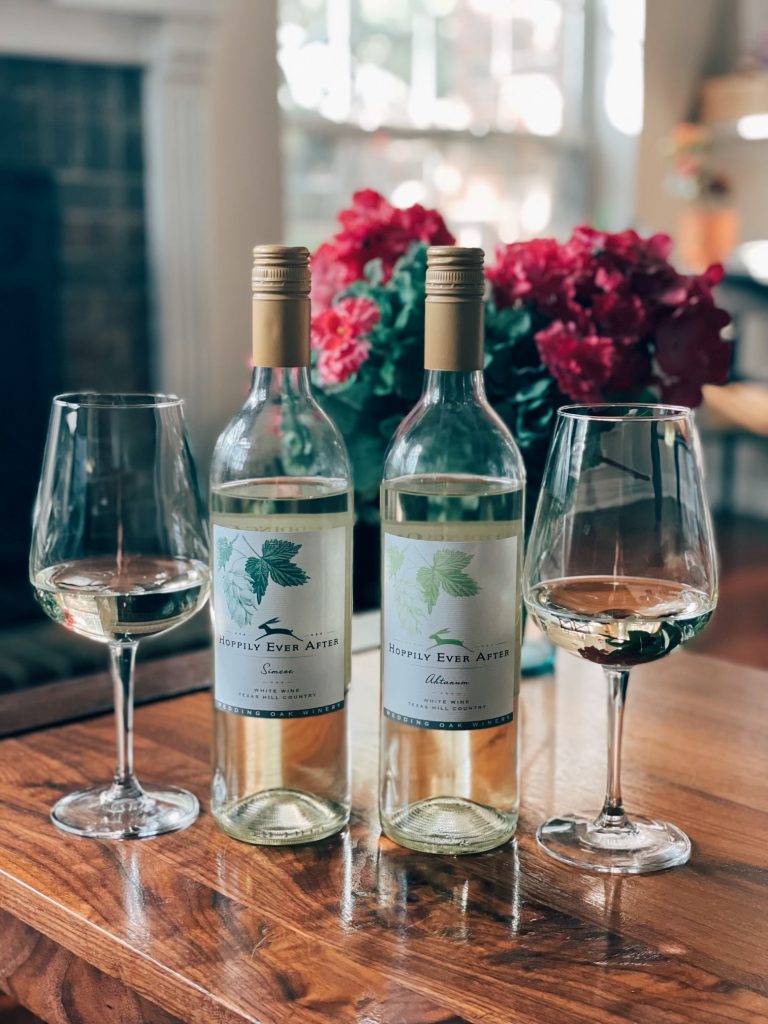 Hops have been an essential ingredient in beer for centuries. Other beverage producers seem to be catching onto the small green flower’s potential for big aroma and flavor, and they’ve been adding it to everything from cider to sparkling water. The latest drink to get the hop treatment? A pair of wines from the Texas Hill Country.

The Hoppily Ever After series produced by Wedding Oak Winery came to be after the winemaker, Seth Urbanek, thought a recent vintage of the Marsanne grape was missing something. At first, he decided to jazz it up by stirring it with the lees, or the yeast particles leftover in the tank following fermentation. Lees can be used in white and sparkling wines to contribute desired texture and flavor.

But even after that, Urbanek thought the San Saba-grown Marsanne was lacking in aroma. And then a conversation with the guys behind Beerburg Brewing, also in the Hill Country, sparked an idea.

Located on 15 acres in southwest Austin, with a sprawling beer garden set among the shade of Texas persimmon and oak trees, Beerburg has stood out for its focus on sustainability and using foraged plants in its experimental brews. Urbanek decided to take a leaf out of the Beerburg playbook and add his own edible plant to the wine – hops, as provided by Beerburg.

“The Marsanne had the creamy mouthfeel I wanted but not the aromatics,” Urbanek said during a virtual media tasting of the two Hoppily Ever After wines. “So I decided to give the hops a test run.”

It was an experiment that he readily admits could have gone “horribly, horribly wrong.”

But both wines have been bottled for two months now, and thus far they’ve been a success. Each one in the series takes its name from the single-hop varietal that went into each version of the Marsanne:

After aging the Marsanne grapes on the lees for six months, Urbanek then added the hops. They spent far less time with the wine, but working with the hops was a “logistical headache” because he didn’t want one varietal to contaminate the other through his equipment.

“They were so aromatic, the winery smelled like hops for days,” he said. “We let the Ahtanum sit in the tank for days. 72 hours total. It was longer than we’d planned, but we pulled it based on the taste. Simcoe sat for 48 hours just because it’s really intense. They’re both still wine. They just have the aromatic intensity we were looking for.”

And so far, reception toward the wines has been positive. He’s noticed people who don’t like beer gravitate toward the Ahtanum, which could be mistaken for a Sauvignon Blanc. On the other hand, “the Simcoe wine is like an IPA” in wine form, he said. “It’s the bestseller right now, and the people who prefer beer like the heavier hand on the hops.”

The blend between various alcoholic beverages, like the hopped wines, is “just where the industry is going. Lots of cross-collaboration,” he said in the media talk. The next step for the Wedding Oak and Beerburg partnership? Wine barrels for the brewery to age its beers in.

Both Hoppily Ever After wines are available at all three Wedding Oak locations – the original in San Saba, as well as tasting rooms in Burnet and Fredericksburg – and at Beerburg’s taproom.