Editors Note: We will be going to check out the grand opening of the brewery tonight and will update with more information.

Central Texas has its first fully operational Brewery/Distillery as Treaty Oak Brewing & Distilling’s new brewery is now open. The 10 year old distillery has had fermentation as an essential part of its operations, and now is using that expertise to make beer. Please see the press release below and attached for information about Treaty Oak Brewing and its beers.

DRIPPING SPRINGS, Texas (December 7, 2016) –Treaty Oak Brewing & Distilling has opened a new craft brewery at Treaty Oak Ranch in Dripping Springs, Texas. The addition of a brewery to the award winning distillery, makes it a unique beverage company producing a wide variety of high quality products. The 30-barrel brew system is slated to brew 2,000 barrels, or the equivalent of 27,500 cases of beer a year. Former Treaty Oak head distiller, Chris Lamb, has assumed the role of brew master.

The brewery is an excellent fit for the company as it marries Treaty Oak’s award winning spirits with its long-time passion for home brewing. In addition, the fermentation process essential to making beer, is also a primary component in the production of the company’s core spirits such as rum and whiskey. Because of this, brewing has been an integral part of Treaty Oak Distilling’s operations for 10 years.

“We’re stoked to introduce a new line of beer, brewed fresh at the Treaty Oak Ranch,” says brew master Chris Lamb. “Our beers reflect the same commitment to quality ingredients and precise production methods as we have with our distilled spirits to create the best possible products.”

America’s thirst for craft beer has grown significantly in recent years. The Brewers Association says that in 2015 U.S. craft brewers saw a 13 percent increase in the amount of beer made, and there are now more breweries than ever before. Texas alone had 65 new licensed brewpubs and breweries in 2015. Treaty Oak Brewing enters the market where consumers increasingly demand locally made craft beer.

Treaty Oak Brewing is introducing three new beers with the opening of its brew house: Fitzhugh Ale, a British mild ale, Lil’ Hop, a session IPA, and Bright Side, a blonde ale. The guiding principle for each of its beers is to create low alcohol session beers that achieve a balance between the malts and hops, the sweetness and bitterness.

Fitzhugh Ale, British Mild: (3.5% ABV) As easy going as an afternoon at our ranch on Fitzhugh Road, the Fitzhugh Ale is a laidback sipper. It’s made with a balance of 2-row, Carmel Wheat and toasted malts with just enough Mandarina Bavaria and East Kent Goldings hops to let the malt flavors shine through. The toasted bread, chocolate, coffee, orange, honey and lavender flavors pair well with a selection of charcuterie and cheese.

Lil’ Hop, Session IPA: (5% ABV) Brewed with a loving blend of Horizon, Mandarina, Bavarian, and Cascade hops, Lil’ Hop IPA, is anything but little. It packs in a healthy helping of hoppy floral spice, sweet sun-kissed orange, orange zest and grapefruit flavors balanced with malty flavors of toasted bread. Its lower alcohol content and complexity on the palate make it a perfect accompaniment to a juicy angus beef hamburger.

Bright Side, Blonde Ale: (4.5% ABV) The name says it all. Bright Side is a light, clean Blonde Ale that is as lively as a sunny Texas Hill Country afternoon. Cascade hops give it an unpretentious backbone, fleshed out with 2-row, Vienna and honey malts to give it pleasing honey suckle, citrus and toasted bread flavors. It’s great with artisanal sausage. 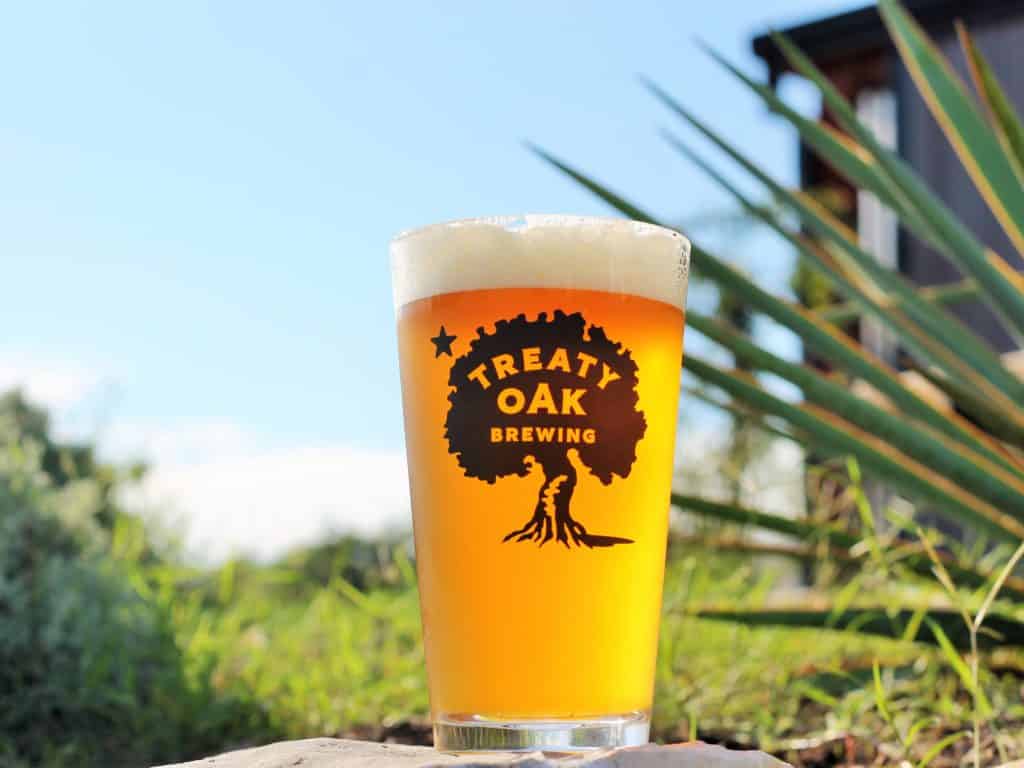 Treaty Oak Brewing has an admiration for brewing traditional styles, and also a creative bent to explore experimentation with its beers. Beyond the three year-round brews, the brewery is in a fortunate position to experiment with a wide variety of fresh ingredients and grains used in the distillery to create special and seasonal beers. Plans are underway to produce a variety of beers such as Saison, lager, maibock, stout and porter.

The brewery also has ready access to numerous oak barrels used for aging in the distillery. Treaty Oak will barrel age each of the three year-round beers in 53 gallon barrels previously used to age rum, gin, whiskey and brandy, providing a vast palette of potential flavors.

“Over the past year, Treaty Oak Ranch has become a Hill Country destination for people who love kicking back in a relaxed atmosphere with great food and beverages,” says Daniel Barnes, founder of Treaty Oak Brewing & Distilling. “Every weekend, we have the opportunity to let people try our experimental beers at the ranch and get real-time customer feedback on what they like. Unlike completely new breweries, we’ve been able to tweak our recipes to ensure they appeal to customer preference. It is so cool to have a customer base that is extremely passionate about beer. And man, they are passionate.”

The new beers will roll out during the month of December. Initially Treaty Oak Brewing will sell its beer on tap at its ranch, and at select establishments in central Texas. Distribution through Brown Distributing Co. will soon expand throughout the state. The brewery will be extending its production by adding two 60 barrel fermenters that will allow it to grow from six brews per month to 10. This will increase annual output to 5,000 barrels a year with new fermenters. The added capacity will allow Treaty Oak Brewing to sell its beer in cans throughout the state beginning in March 2017.