We had the opportunity to talk to Uncle Billy’s Co-founder Rick Engel yesterday about their upcoming 10th Anniversary. I asked Rick if 10 years ago where he expected things to be with Uncle Billy’s. Rick said he had hoped they would be this successful and that the recent Brewpub TABC law changes in 2013 really helped them, specifically in regards to being able to distribute. (Silly Texas Beer laws!)

A lot has changed for Uncle Billy’s in the past few years. In 2015, they brought aboard their new Brewmaster Trevor Nearburg. I have to say, Trevor is probably one of the happiest and friendliest people in the industry. We had an idea for a beer and wound up collaborating with Trevor and Uncle Billy’s on what later became an Imperial Red Rye called “Beauty is in the Rye of the Beholder”. I’m not the best home brewer and Trevor did a great job of explaining everything during the process. (Sorry Trevor, I forgot most of what you taught me, we’ll have to brew again soon!) It has a not too shabby rating of 3.76 on Untappd!

Uncle Billy’s has also been working with Christine Celis(see Flemish Fox) and brought on her daughter Daytona Camps as assistant brewer. We think it’s pretty cool that Daytona is a third generation Brewer(granddaughter of Pierre Celis).

Lazy Day Lager is doing so well, that they recently added an 80bbl fermenter to help keep up with the demand!

Uncle Billy’s has 8 days of 10th Anniversary celebration planned. See below for the Official Press release.

Congratulations on your 10th year brewing beer Uncle Billy’s and we plan to stop by a celebrate with y’all!

AUSTIN, Texas (April 7, 2016) – Uncle Billy’s Brewery and Smokehouse, an Austin Texas based brewpub, is celebrating its 10 years of producing exceptional craft beers paired with slow-smoked Texas barbecue in a relaxed setting on Barton Springs Road. The brewpub, co-founded in 2006 by Rick Engel, is one of the oldest operating brewpubs in Austin.

During the past 10 years, Uncle Billy’s has achieved several milestones. It’s small batch craft beers have won gold and silver medals at the Great American Beer Festival in four separate years and bronze at the World Beer Cup. It has made numerous collaboration beers with other brewers. Uncle Billy’s became the first brewpub in Texas to distribute beer through a third party distributor to bars and restaurants, and is now available state-wide on the shelves at multiple retail grocers and on the tap walls of many of the more popular craft beer centric locations across Texas.

In 2014 the brewpub was completely renovated with the installation a new 20-barrel brewery system that more than tripled the brewing capacity. In March 2016 the brewery installed a new 80-barrel fermenter to help keep up with the demand for its popular lagers.

“Over the last 10 years, Uncle Billy’s has become known as one of the best local brewpubs in the state,” says Rick Engel. “We are extremely thankful to all of our loyal customers who continue to visit Uncle Billy’s on Barton Springs Road or frequently buy our beer in bars, restaurants, and retail stores across the state. Several of Uncle Billy’s craft beer selections are now available at the UT and Round Rock Express stadiums, ACL Moody Theatre and Circuit of the Americas. You have helped make Uncle Billy’s a true Austin icon. We’re excited to keep the experience fresh with a new menu, live music, fun events, and a regularly updated list of new craft beers on tap.”

Over the past 10 years, Uncle Billy’s has brewed more than 13,000 barrels of beer, or the equivalent of 3,000,000 pints. That is approximately enough beer for everyone over the age of 21 in Austin to have two pints.

“We made a really special beer to celebrate our anniversary,” says head brewer, Trevor Nearburg. “A lot of our customers love big IPAs, so we made a powerful 10 Year Anniversary double IPA made with 10 different kinds of the finest aromatic hops. It has hefty citrus and pine flavors and weighs in at 9 percent alcohol with 100 IBUs. We will tap the first keg at our Crafternoon Crawfish Boil on April 16. We’ll also tap three special firkins on April 17 in our Brunch of Firkins event.”

· Saturday, April16 at 12:00 p.m., Crafternoon Crawfish Boil, We’re kicking off our #10YearsOfBeer Anniversary Week with spicy crawdads and cold craft beer. Crawfish are available by the pound at market price until they are gone!

· Monday, April 18 from 11:00 am to 5:00 p.m., Fresh Can Monday, experience canning our Green Room IPA with an opportunity to purchase fresh six-packs at a special price

· Tuesday, April 19, Anniversary Pint Night, we are rolling back pint prices to the original prices every Tuesday until May 10

· Wednesday, April 20, all day, We Smoke the Good Stuff, 10% off all smoked meats Thursday, April 21, from 6:30 to 8:00 p.m., Honky Tonk Happy Hour, the first of our Thursday evening live music happy hours of the season with specials on pints

· Friday, April 22, Barton Springs Full Moon Swim, meet at Uncle Billy’s at sundown to pre-game and again after the swim to relax with specials on Barton Springs Pale Ale

· Saturday, April 23, from 10:00 a.m. to 3:00 p.m., Puppy Porter Palooza, a celebration of dogs on the patio. All who bring their well-behaved dog will receive a four-pack of Gypsy Dubbel Coffee Porter and there will be brunch specials on Bloody Marys, and Mimosas 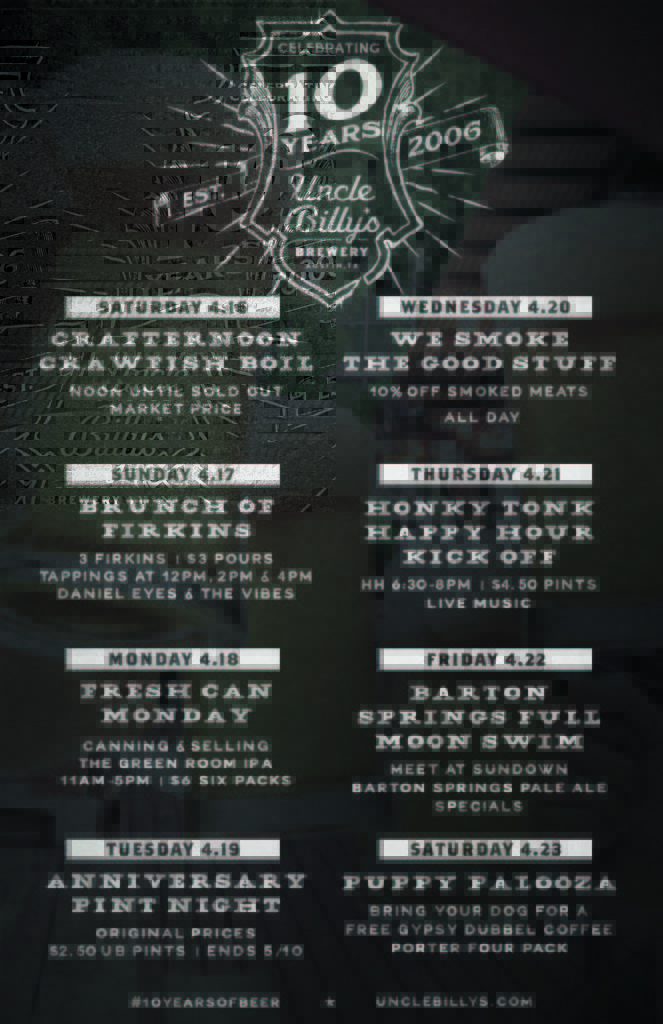