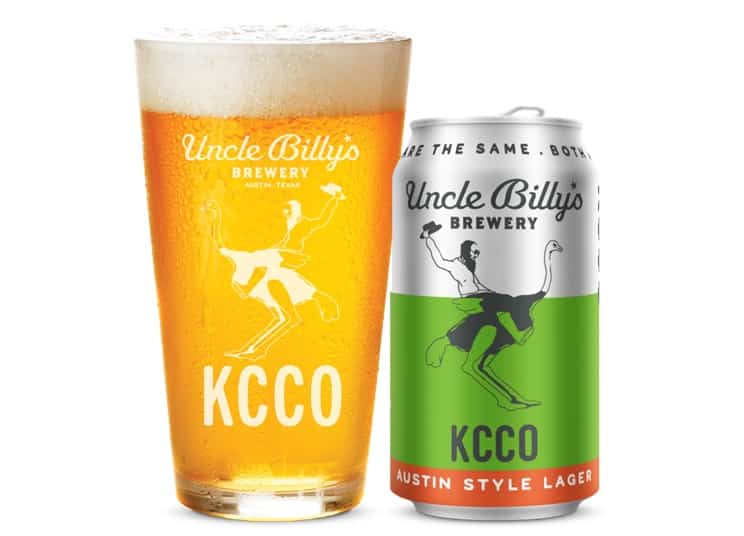 AUSTIN, Texas (November 15, 2018) – Uncle Billy’s Brewery & Smokehouse, one of Austin’s oldest craft brewpubs, is introducing the KCCO (Keep Calm and Chive On) Austin-style Lager in collaboration with the local entertainment media company, Chive Media Group. With millions of fans of its popular entertainment website, theCHIVE, its streaming TV channel, Chive TV, and product website, The Chivery, the company has a built-in loyal fan base for its KCCO beer.
“We previously brewed three styles of KCCO beer with a larger, nationwide brewer in the Pacific Northwest,” said Leo Resig, co-founder and CEO, Chive Media Group. “It was incredibly popular, and my brother John and I constantly had people asking us to bring the beer back. This time around, we are brewing an easy-drinking beer for Texans with this Austin-style Lager. The new KCCO is a lighter delicious craft beer that isn’t weighted down. It’s a true-blue porch pounder.”
“KCCO Austin lager is not only delicious, but it’s also powered by a new content-first technology engine, CHIVE TV,” says John Resig, co-founder and president of Chive Media Group. “Now playing in more than 300 bars in Austin alone and, more than 4,000 bars and restaurants nationally, CHIVE TV is changing the way consumers drink on-premise. Take a good beer, crafted by a trusted local brewer like Uncle Billy’s, then pair it with a nationally recognized brand which provides targeted advertising directly to bars that carry KCCO beer, and you have a unique recipe for success.”
The new KCCO beer is an Austin-style Lager brewed for drinking on days when you don’t have a care in the world. It’s as easy-going as Austin. Made with German lager yeast, German pilsner malt, and Sterling and Jarrylo hops, KCCO is a light bodied, with laidback hop aroma, and malty balanced brew with a clean, fresh finish. It pairs well with smoked turkey, as well as spicy chicken wings. It is the perfect crisp beer to crush while hanging out on the patio, fishing on the lake, or watching a football game.
“We were introduced to theCHIVE through our distributor in Austin, Brown Distributing Co., because they thought we both have a “Keep Austin Weird” vibe,” says Stephen Wagner, head brewer at Uncle Billy’s. “We had a lot of fun creating this beer in collaboration with theCHIVE. We tasted dozens of beer styles to come up with a recipe for a low-alcohol session pale lager that we think will appeal to a wide audience and craft beer drinkers too. We used the high-quality ingredients that Uncle Billy’s is known for and a healthy dose of irreverence that theCHIVE is known for. We’re stoked to bring KCCO beer back.”
Little Woodrow’s neighborhood bars in Austin is the KCCO Beer launch partner, and are the first bars in town to have KCCO beer on draft at all five of its area locations (Burnet Road, Parmer Lane, Southpark Meadows, Tech Ridge, and West 6th Street). Uncle Billy’s KCCO Austin-style Lager is distributed by Brown Distributing Company and will soon be available on draft in hundreds of bars and restaurants in Austin, Texas.
About Uncle Billy’s Brewery & Smokehouse:
Founded in 2006, Uncle Billy’s Brewery & Smokehouse is located in the heart of Austin’s funkiest restaurant row on Barton Springs Road and is inspired by William “Uncle Billy” Barton, whose 1830’s tract included the renowned springs. Uncle Billy’s offers the perfect combination of award-winning, craft beers, distilled spirits, hand-crafted cocktails, and delicious, slow-smoked Texas barbeque. Learn more at: http://unclebillys.com/ and connect with Uncle Billy’s Brewery on Facebook, Instagram and Twitter.
More Craft Beer Related Posts: