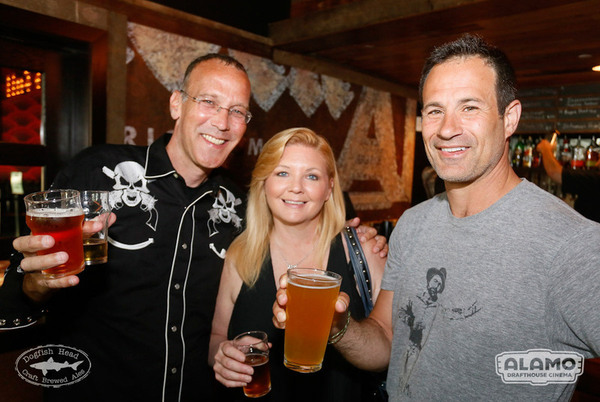 **The Giveaway has ended..congrats to the Winners!**

Our friends at Alamo Drafthouse have generously offered to give 3 pairs of tickets to our fans!

Tickets include the following:

-Winners will need to provide name/email/phone (for will call).

-Winners will pick up tix at will-call.

To enter to win:

-You Must be following: @CraftBeerATX , @DraftHouse and @dogfishbeer on Twitter.

-Answer this question: “How many bottles of beer were on the Titanic?”

We’ll choose the winners at random. We will announce the name of the winners on our Facebook & Twitter pages. And that’s it from us!  Please forward this email to a friend who you think might be interested in subscribing!

Highlights include rolling roadshow with Texas craft brewers and Cabin Boy with Chris Elliot and Adam Resnick in person!

Austin, TX – Monday, April 6 2015 – Alamo Drafthouse Cinema and Dogfish Head Craft Brewery are proud to announce the return of the “Off-Centered Film Fest.” Now in its eighth year, OCFF is an epic three-day celebration of craft beer, delicious food and off-centered films for off-centered people. This year, it all revolves around the theme of “Yacht Rockin'”, paying tribute radical nautical times in cinema. Two major highlights this year include a massive Rolling Roadshow Beer Party with a fleet of Texas craft brewers on deck along Austin’s movie mockers Master Pancake Skewering TITANIC under the stars, and a rare 35mm screening of Chris Elliott’s salty 1994 comedy CABIN BOY with Elliott and director Adam Resnick in person!

Rare and vintage Dogfish Head beers will be available for purchase at all OCFF screenings. Plus, Sam Calagione, Dogfish Head Craft Brewery Founder and Head Brewer, will also be in person throughout the fest, hosting and toasting the spirit of “Yacht Rockin'” at all of this year’s events. And, because we all love smooth sailing and clean coastlines, this year’s OCFF will help further the great work of and help to benefit The National Wildlife Federation (nwf.org).

“I look forward to Off-Centered Film Fest every year,” says Sam. “Traveling to Austin, hanging with craft beer heads from Texas and beyond, celebrating film and food with our friends at the Drafthouse, seeing all the crazy inspired OCFF short film submissions… it’s all a huge blast!”

“John Erler and his Master Pancake team have been a big part of the Alamo Drafthouse family since nearly the very beginning,” says Alamo Drafthouse CEO and Founder Tim League. ” I am really excited to bring one of their finest shows ever into what has become one of my all time favorite annual events, the Off-Centered Film Festival.”

Also on tap for the weekend: Wes Anderson’s THE LIFE AQUATIC WITH STEVE ZISSOU Dogfish Head Beer Feast, featuring a menu of chef-prepared food inspired by the film paired with hard-to-find Dogfish Head beers; screenings of the Marx Brothers classic high seas comedy MONKEY BUSINESS and modern Korean monster-piece THE HOST; and even a Yacht Rockin’ Party on an actual boat!

On Sunday, April 25, this year’s OCFF will come to a close with special guests comedian Chris Elliott and director Adam Resnick in person at Alamo South Lamar to present a rare 35mm screening of their tragically underappreciated comedy CABIN BOY.

“CABIN BOY is the pinnacle of ‘off-centered’ comedies,” says Alamo Director of Beer Events and OCFF programmer John Gross. “And we aim to make this 35mm screening the best one ever. It is such an honor to host Chris Elliott, who in addition to being a national treasure, brought life to the silver screen’s best fancy lad!”

Each year OCFF also features a short film competition. This year, contestants submitted 3-minute or less shorts on the “Yacht Rockin'” theme and the winners were selected via Facebook. The top three finalists are invited to come to Austin and will have their work shown up on the big screen – and find out their final ranking of 1st, 2nd, or 3rd place – as part of Sunday’s MONKEY BUSINESS program.

About Off-Centered Film Fest
Now in its eighth year, the OCFF (Off-centered Film Fest) is a joint-effort from the minds behind the Alamo Drafthouse Cinema and Dogfish Head Craft Brewed Ales. Featuring celebrity guests from the film and beer worlds, gourmet food, extreme beers, great prizes and independent/classic films. This mainstay of the Austin event landscape has made a name for itself showcasing off-centered films for off-centered people.

About Dogfish Head Craft Brewery
When Sam Calagione opened Dogfish Head in 1995 it was the smallest commercial brewery in America making 10 gallons of beer at a time. Today Dogfish Head is among the fastest growing breweries in the country. Dogfish Head has focused on brewing stronger, more exotic beers since the day it opened as the motto “Off-centered ales for off-centered people” attests to. Dogfish Head has grown into a 120 person company with a restaurant/brewery/distillery in Rehoboth Beach and a production brewery in Milton, Delaware, selling beer in 31 states and three countries. Sam authored “Brewing up a Business” and “Extreme Brewing,” co-authored “He Said Beer, She Said Wine,” and is the host of the Discovery Channel series, Brew Masters. He lives in Lewes, Delaware, with his wife Mariah and children, Sammy and Grier.