We have been so blessed here in Austin with the influx of such amazing beer over the last couple of years it is very easy to lose sight of some of the local breweries that have been so instrumental in building our craft scene. Such is the case for Circle Brewing who just a few weeks ago celebrated their 6th Anniversary debuting a fresh logo design on their newly launched cans. They are certainly worth the revisit; if not only for their highly drinkable, balanced year-round offerings that you can find just about anywhere but also for their exciting taproom-only monthly, seasonal releases and special projects like their 2016 World Beer Cup, Gold Medal winning Archetype Historical IPA.

Circle Brewing was started by childhood friends Ben Sabel and Judson Mulherin who singled out Austin as the location to open their brewery in 2011. Ben had a unique introduction to homebrewing while he was in high school learning about the craft from his mother who was an avid at-home winemaker. Traveling while an intern at Xerox, Ben experienced the Oregon Craft Brewers Festival in 2005 and came to the realization that turning his hobby into a viable business was a real possibility and he began down the long and winding trail that led to Circle. A few years later he found himself unhappy working as a talent agent in LA and decided to make the jump into the brewing arena finding a job with Bay Hawk Ales (now Evans Brewing). “I was doing everything for Bay Hawk. I started milling their grain 5 days a week, then did some sales for them after hours before finally getting into the brewing side eventually working in their cellars.”

Finally convincing Jud to leave his job as an aviation mechanic in San Diego, the pair set out for Austin to start Circle. Ben shares about their choice, “Austin had all of the things that we were looking for in a place to put down roots. It’s an amazing town that puts an emphasis on local companies and products. It is a cool place that I wanted to live plus at the time was very underserved as far as craft beer went. It seemed perfect for us in every possible way.” In 2009, they found their current location and began the arduous permitting and buildout process bringing their first beers to market in the spring of 2011.

Circle grew very organically only adding their first employee (besides Ben and Jud) 18 months in and exclusively sold draft product for two and a half years before finally deciding to bottle their beer. Ben says, “We wanted to get out and sell our beer and build a name for ourselves before we started bottling. Making the jump into bottles comes with its own needs including a delivery vehicle and a driver/delivery person, plus necessary increases in cold storage capacity.” In keeping with their focus on quality, Circle utilizes a unique hybrid distribution model partnering with Brown Distributing to handle all their packaged product in addition to draft in the six surrounding counties outside of Austin while continuing to self distribute kegs in Travis County and areas down the 35 corridor. Sabel shared, “For us it has always been super important for us to control the quality of our beer door to door. To ensure that the beer is the highest quality, that our lines are being cleaned by our team and to control our own product in our home market.” 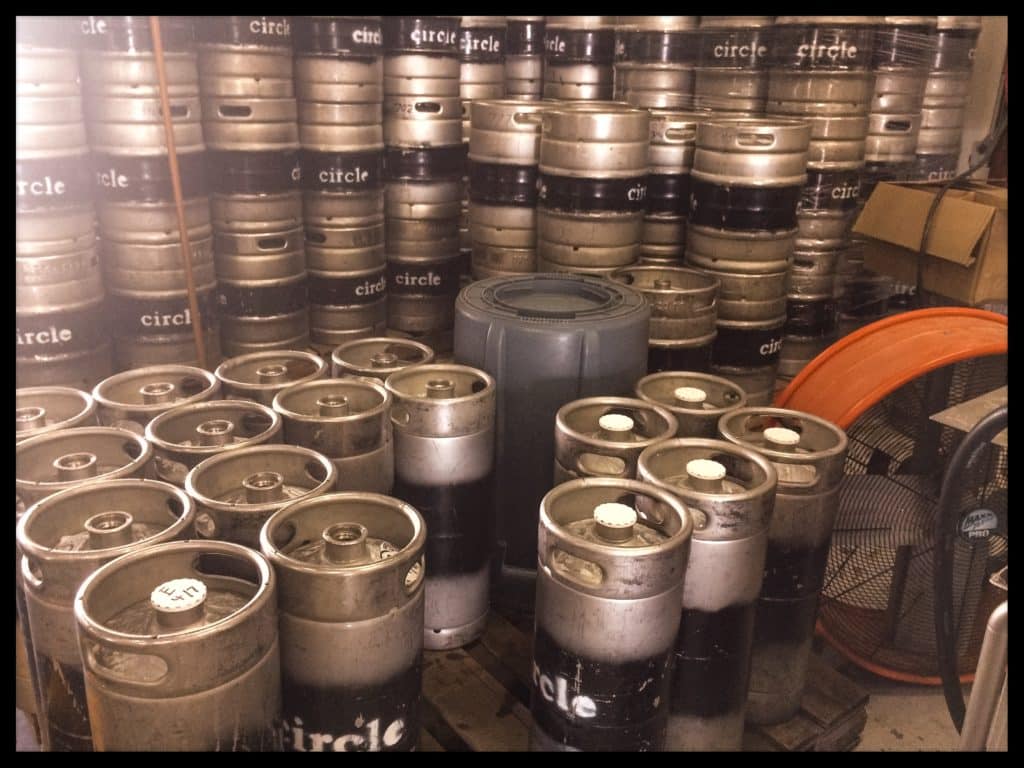 Even though it’s only May, 2017 has already been a very pivotal year for Circle as they made the switch to cans and have gone through a massive redesign to their logo, merchandise and overall aesthetic. Ben tells us, “we had been wanting to rebrand for years now and making the switch to cans presented the perfect opportunity to finally make that happen. I created our original logo (the circle around the word circle) on my laptop, so it was really nice to work with professional designers who really knew what they were doing.” Circle enlisted the services of local design firm Make & Matter who are best known for their work for Hat Creek Burger Co. and Swift Whiskey. The results are a much more polished and attention grabbing geometric can design with bright colors and images of all four of the ingredients (water, hops, malt and yeast) that Circle exclusively use in their beers. They should be complete with their transition into cans shortly and will only be bottling special bombers moving forward including their Archetype Historical IPA. 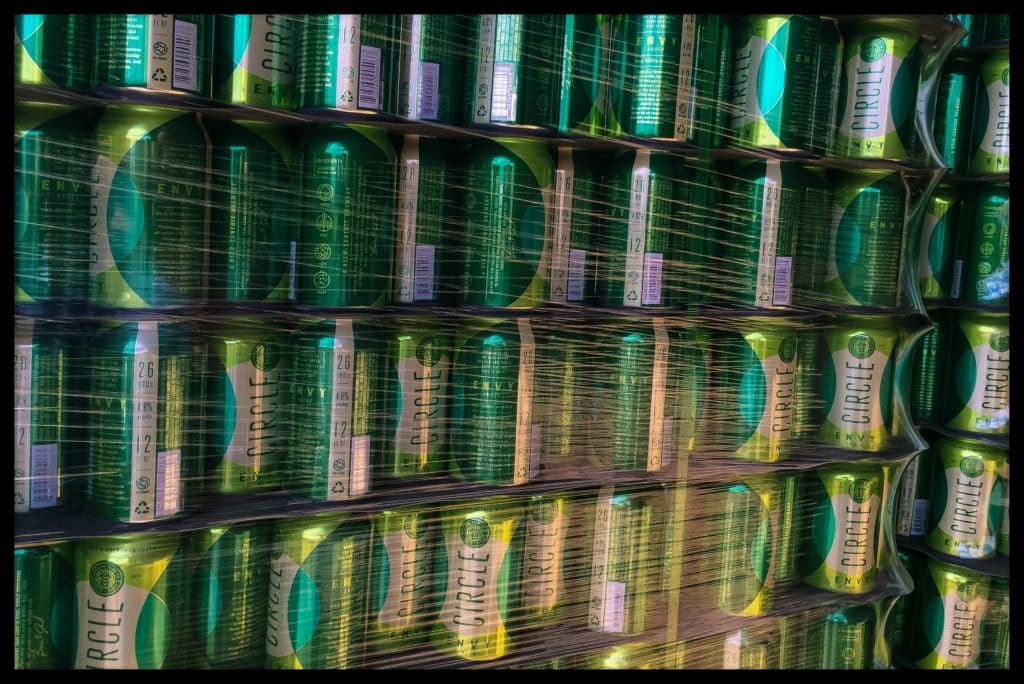 Speaking of Circle’s Archetype Historical IPA, I think it is one of the most important and underrated local beers not only for its complex and well designed flavor profile but also for its historical significance. Archetype is greater than just the sum of its parts as hours and hours of research and collaboration took place in order to create this beer that received gold at last year’s World Beer Cup in the Historical Ale category. Ben shared that “4 years ago at CBC I attended a seminar about historical beer that started me on the path of what it would be like to brew the original IPA. They discussed whether it was or wasn’t infected with Brettanomyces, what the original flavor profile might have been coming from the UK and how it compared to the final profile once it reached its final destination.” The seminar stuck with Ben and set in motion countless hours of research looking into historical beer recipes, ships’ logs and manifests. Eventually Ben’s research led him to Brandon Ade from local, micro-malthouse Blacklands Malt that resulted in a collaboration to recreate the classic White Burton Malt that was historically used in pale ale recipes centuries ago. It will be interesting to see how Archetype fares at this year’s GABF as Ben excitedly plans to enter it into the Historical Beer style category tasting competition. I am also excited to see what other types of Historical styles Ben and the Circle team try to recreate in the future. 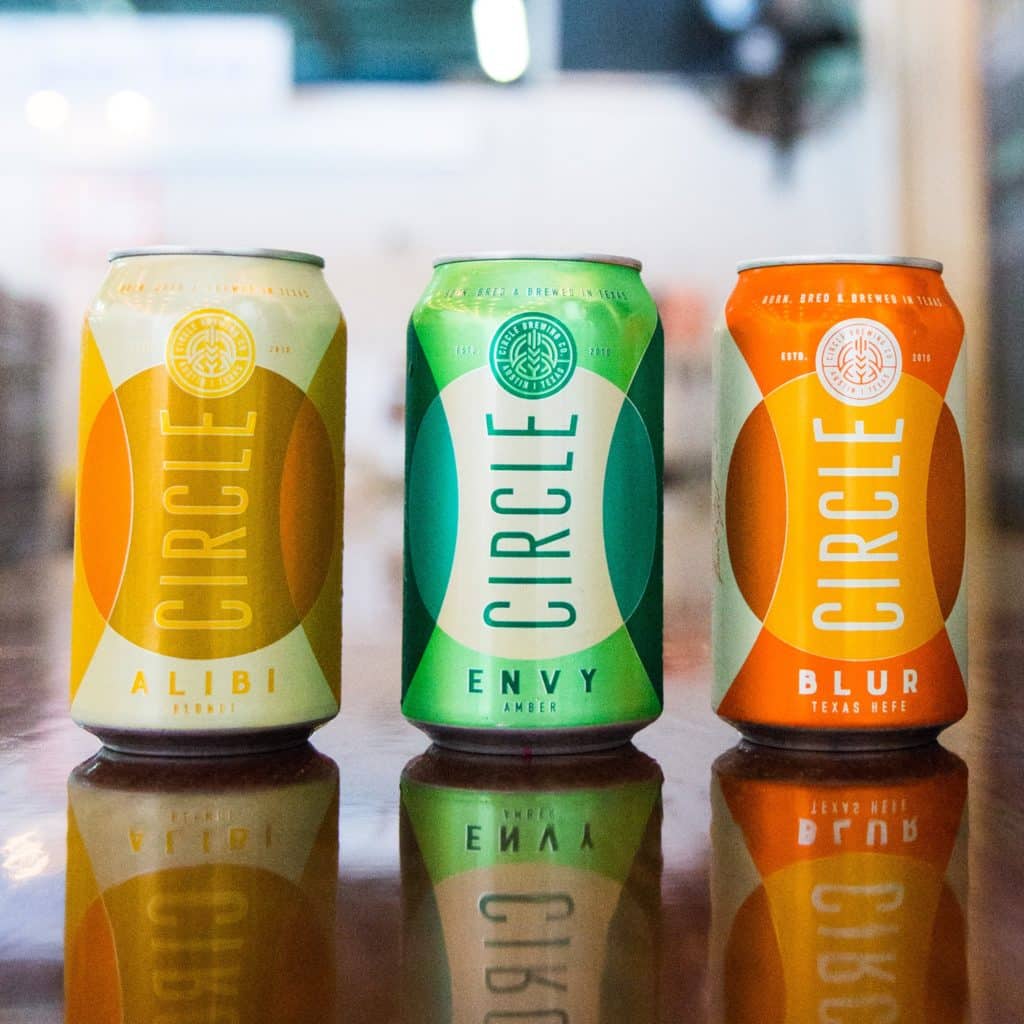 On the day of our visit, Circle had 9 beers available including an experimental, taproom-only cask.

Alibi Blond (Hybrid German Maibock & American Blond) – Winner of the Silver Medal at the 2014 World Beer Cup. Much more flavorful and complex than I remember it being! Clean with a pronounced “cereal” flavor from the use of Pilsner and Munich malts.

Blur Hefeweizen – Circle’s most popular beer accounting for nearly half of what they brew. Solid take on the style! German White wheat with some caramel malt for body and color. South Bavarian Hefeweizen yeast imparts your typical banana, clove and citrus flavors. Pearl hops add an earthy note to balance out the sweetness a bit.

Envy ESB/ British Amber – The beer Ben and Jud thought would be their flagship. By far it was the hardest to dial in needing 38 separate batches with different variations to hone in on their current recipe. Pretty smooth and easy to drink using all U.K. Ingredients including 2 different Thomas Fawcett Caramel malts (45 & 65) imparting a rich, raisin and dried fruit quality. Sweetness is balanced out nicely with East Kent Golding and Fuggle hops producing a nice spicy and earthy bitterness with subtle hints of grass.

Sweet Tart – Envy Amber on cask flavored with Tart Cherries. Although Circle does adhere to a “reinheitsgebot-like” philosophy in their brewing they do let their hair down and let their brewers and customers alike have some fun by adding unique ingredients to their taproom-only casks. This version of Envy was very good as the tart cherry flavors felt very at home alongside the pruney, dried fruit notes present in the base beer.

Lady Bird American IPA – Will be joining year round lineup in cans and on draft! Assertive and complex IPA with a sneaky 7.2% ABV using some exciting hop varieties; Idaho 7 & Zyphus. The Idaho 7 imparts bright, tropical flavors and a slightly orange pithy bitterness while the Zyphus adds dankier, piney notes. All that hop character is balanced nicely with some crisp Victory malt and fermented with Circle’s house 007 Dry English Ale Yeast.

Doppel Blur Imperial Hefeweizen – Another heavy hitter coming in at a whopping 7.7% ABV. Flavors of marmalade are right upfront with more of an orange character than the regular Blur on account of the addition of munich malt.

Nightlight Irish Stout – easy going 4.7% ABV served on nitro. Exhibits everything you are looking for in a stout with its roasted and chocolate malts with a slight hint of hazelnut on the backend.

Archetype Historical IPA – Ben was gracious enough to send me home with a bomber. Archetype is his favorite Circle brew and I can see why. Not only can he taste the fruits of all of his arduous research that went into the creation of the beer but the end result is really good, too! Really unique IPA with hints of vanilla and oak richness with a restrained sour tang from the Brett and a nice herbal spiciness from the EKG hops. Very unique and worth seeking out. 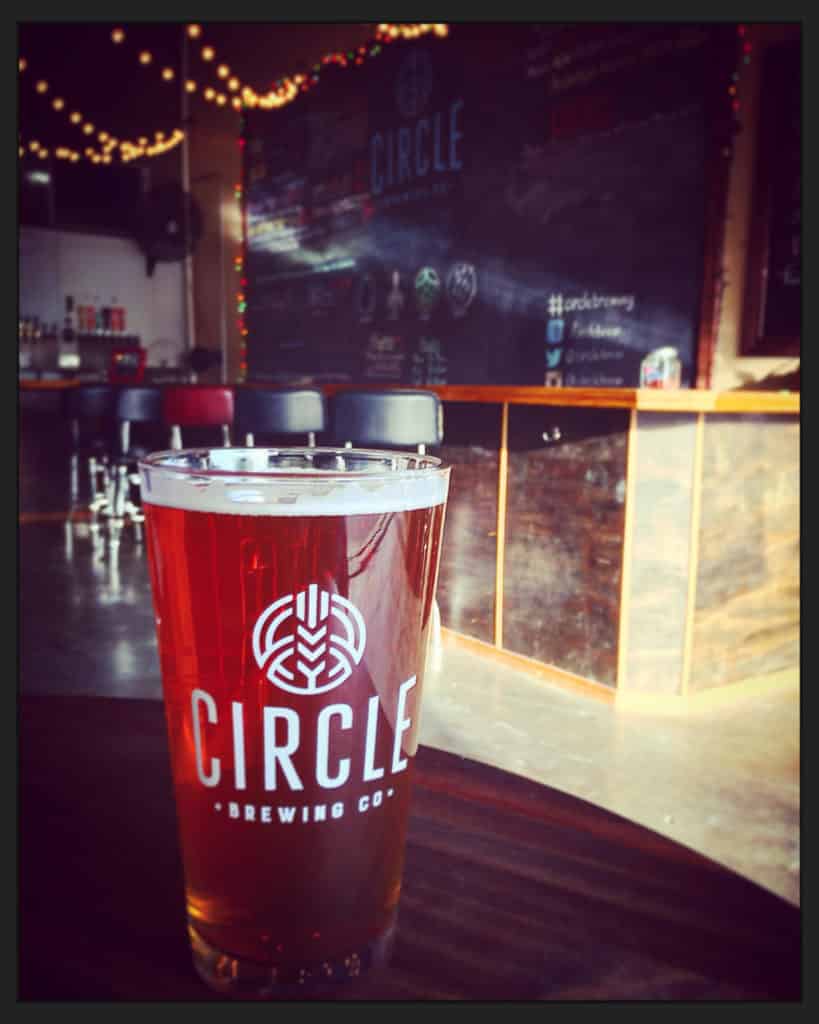 Upcoming Brews: Fanny Pack Kolsch should be on tap now with the Pacific Jade dry-hopped Saison following up right on its heels releasing closer to June.

Location: 2340 W Braker Ln, Ste B Austin, TX 78758
Hours: Thursday 5-9pm, Friday 5-10pm, Saturday 12-10pm, Sunday 12-6pm
Kid Friendly: Yes, although there’s not much for kids to do short of sitting outside at the picnic tables in the parking lot.
Dog Friendly: Yes
Parking: Pretty ample parking lot in front of the brewery.
Food: Not much, although they are trying to get a more consistent flow of food trucks on the weekends. 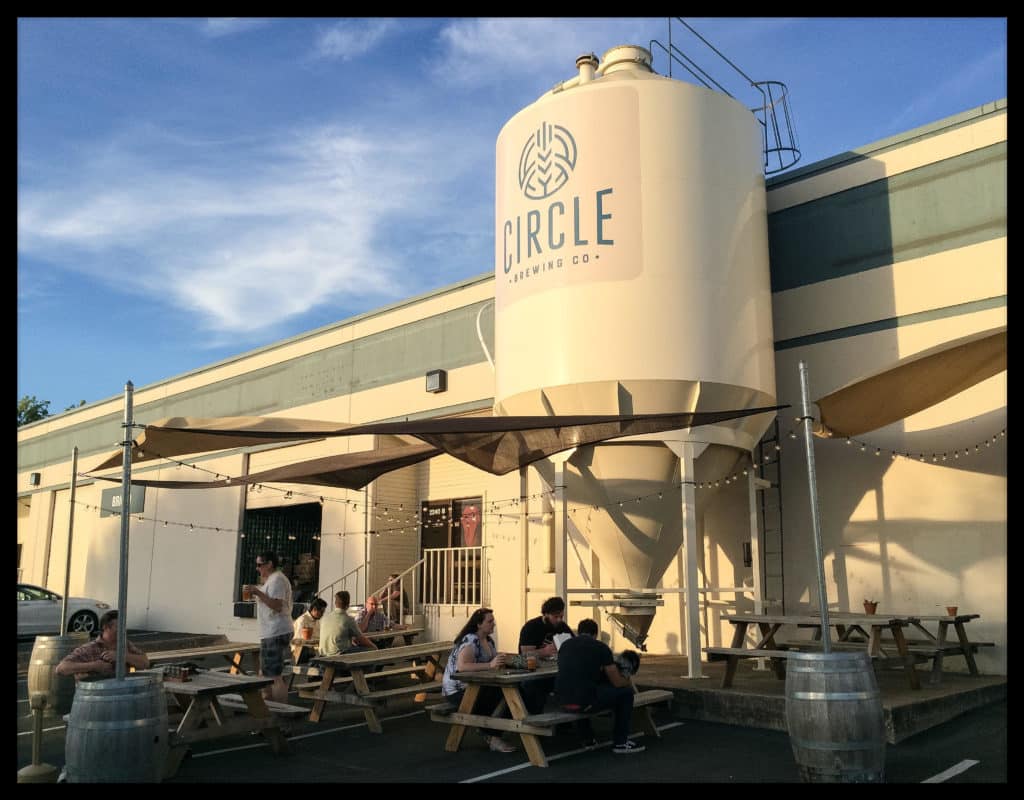