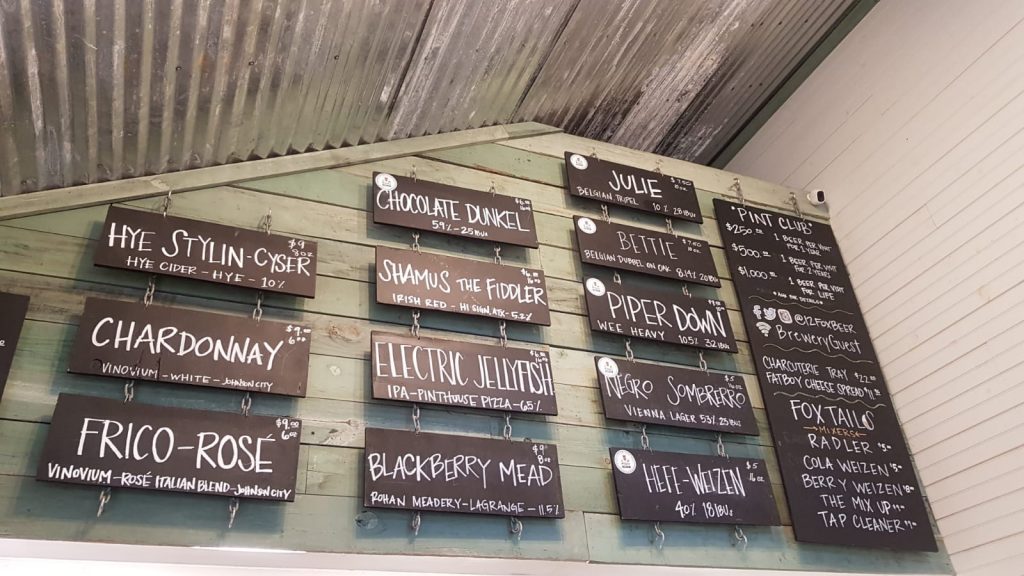 When we attended the bustling 12 Fox launch party one year ago, we could never have imagined that twelve months later we would be celebrating not just the brewery itself but the end of a pandemic-based lockdown. As Texas slowly reopens, the scenic, expansive 12 Fox taproom is ideally positioned to welcome guests back, with almost all of its seating completely outdoors and plenty of space to move around in. We visited for the Friday night of their weekend-long revelry and had a fantastic evening drinking and eating under the stars while listening to country music hits by local musician Chad Anderson, all in a safely distanced environment.

At just one-year-old, 12 Fox Brewing already has a lot to celebrate. The brainchild of Army veterans Head Brewer Aaron Luelling and CEO Joe Hogge, who met during their basic training back in 1994, 12 Fox has been a huge hit with both local patrons and regular visitors such as myself, all attracted by the high-quality European-style brews and gorgeous scenic Hill Country space. Since their opening in May 2019, 12 Fox has been so successful that they have been able to expand from a single barrel brewhouse to a 5 BBL brewhouse with 4 fermenters, and are now planning to upgrade again with an additional two 10 BBL Fermenters, a significant increase in output reflecting the demand for their beer. Not only have 12 Fox grown, but they have also been commended by both independent data and analytics body Hopalytics, from whom they received a Best New Brewery award, and the Dripping Springs Chamber of Commerce who recognized them with a Best New Business accolade – notable achievements against the backdrop of the fast-growing beer scene across the state.

So what next for 12 Fox? Chatting with Aaron Luelling, he emphasized that while growth is obviously important and desirable for them, they don’t want to lose sight of their strong community focus. “We want to keep giving back to the community and focus on being part of a community that has supported us so much,” he said. There are plans for increased participation in beer festivals and tap takeovers to get their beers out to a wider audience and to expand the taproom with a second bar and another bathroom to reduce wait times, but production will be increased in a controlled manner with the focus on ensuring that on-site demand is met. 12 Fox has demonstrated their commitment to their community with local fundraising activities throughout the year, most recently for food bank Helping Hands and the Project Graduation fund for local seniors who missed out on graduating from college. Local artists have performed during all our (many) visits, and the atmosphere is one of a vibrant and well-loved community hub.

Community support was vital for 12 Fox’s survival during the Covid-19 lockdown when they had to adapt their business model rapidly in order to keep within government regulations. “The most challenging thing for us was how to keep supplying our customers,” says Aaron. “(Texas state) Governor Abbot allowed holders of a food permit to sell groceries, so we did a paradigm shift for our customers by offering groceries to people who either didn’t want to go to HEB or couldn’t. We also purchased a can seamer and offered beer to go for the first time.” This dual-layered strategy was implemented so swiftly and effectively that 12 Fox did more than survive – in fact, they were busy keeping up with demand throughout the lockdown period, demonstrating their flexibility and resilience as a business as well as the popularity of their beer.

12 Fox is of course, first and foremost, a brewery, and quality is consistent and high. All beers continue to be brewed from the same Mecca Grade Estate Malt grown on the farm of Aaron’s cousin Seth out in Oregon, which soaks up the characteristics of the soil, bringing a little taste of the Pacific Northwest to Central Texas. 12 Fox opened with nine beers ready to drink, and in the last year have put out an impressive 27 different brews. I’m a huge fan of their two flagship beers, the smooth banana-caramel Bettie Belgian Dubbel and deep, rich honeyed Julie Belgian Tripel, but have also really enjoyed newer offerings like the boozy dried-fruit Piper Down Scotch Ale. Despite having such a productive year, Aaron does not seem at all short of inspiration for what to work on next and we can look forward to the possibility of an Australian Sparkling Ale, a Belgian Wit, a Belgian Pale and an Eisbock in 12 Fox’s future – plenty of motivation for some return journeys and a lot to look forward to in the 12 months ahead.

Ruvani de Silva (she/her) is a travel-loving beer writer with bylines including Good Beer Hunting, PorchDrinking, Beer Is For Everyone, Texas Highways and VinePair. She writes about beer in Central Texas and beyond, and is a vocal advocate for diversity, equality and inclusion in beer. Ruvani has been recognised as one of Good Beer Hunting's 2021 Signifiers and Highly Commended by the British Guild of Beer Writers in their 2021 Awards Best Beer Writer, National Media category. As a British South Asian woman living in Texas, Ruvani brings a unique voice to the world of craft beer. She is also the founder of #SouthAsianBeerClub. Find her on Twitter and Instagram as @amethyst_heels, and read her articles at CraftBeerAmethyst.com.