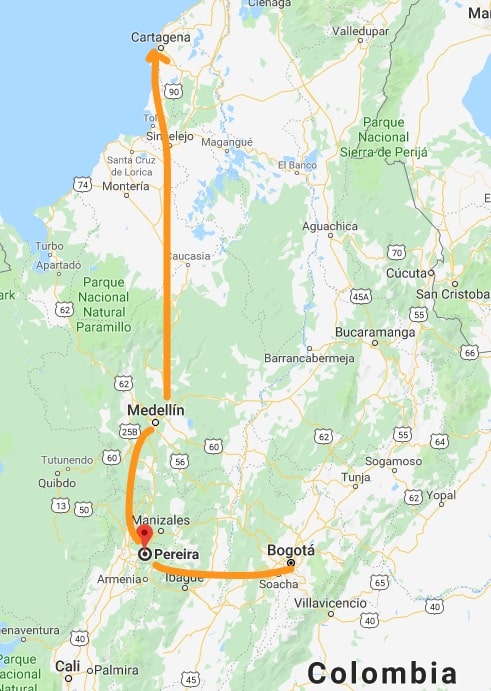 Colombia is known for their great diversity, food, coffee, culture & the natural beauty among some other things that I will not go into, but lets face it, they are not known for their craft beer scene. Read on to learn about how craft beer is a growing trend in Colombia.

The saying here is, “It’s Colombia not Columbia!” (We got in trouble on Instagram for misspelling it…dang auto-correct)

Recently we did a 11 day group tour with Gate 1 in Colombia visiting Bogota, Pereira (the coffee region), Medellin and Cartagena.

Surprisingly, the beer scene in Colombia is up and coming. We were able to find good local craft beer throughout the cities we visited in Colombia.

One negative though, AB InBev is all over Colombia cloaking themselves as local craft brewpubs called Bogota Beer Company (BBC). Fortunately there are real microbreweries that exist and continue to open up throughout Colombia.

The main brewery in Colombia is Club Colombia with their Dorada Pils being the most popular beer. They also brew a Roja and Negra by Cervecería Bavaria (SAB Miller) These beers for around 3,000 – 6,000 pesos ($1 to $2 dollars).

The first city we visited was Bogota, the cosmopolitan capital.

In Bogota, BBC Beer Company (Bogota Beer) (AB InBev) has several locations (actually they have locations all over Colombia). Here are the different beers we had from BBC throughout our visit: 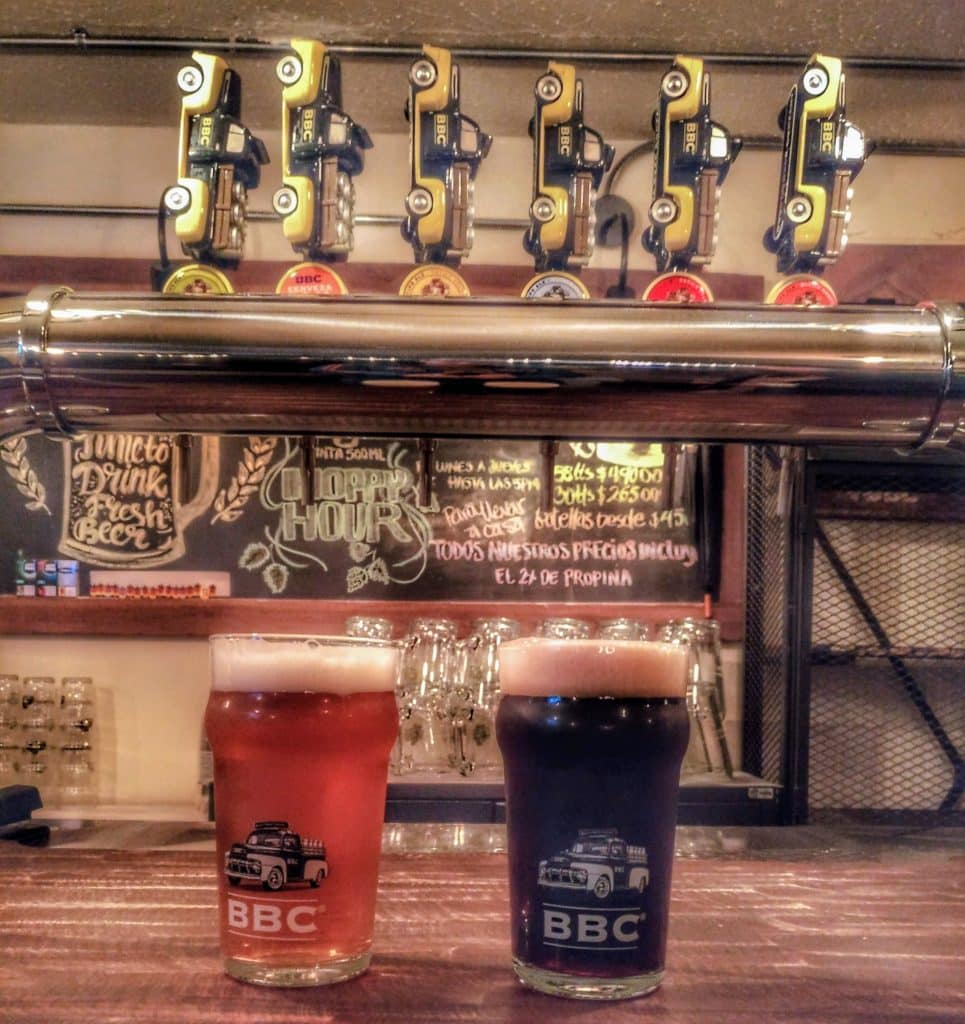 Along with local beers we were able to try some “big ass ants”, a local delicacy called Hormigas Culonas. Yes, big ants that are dead and the taste is crunchy and salty. 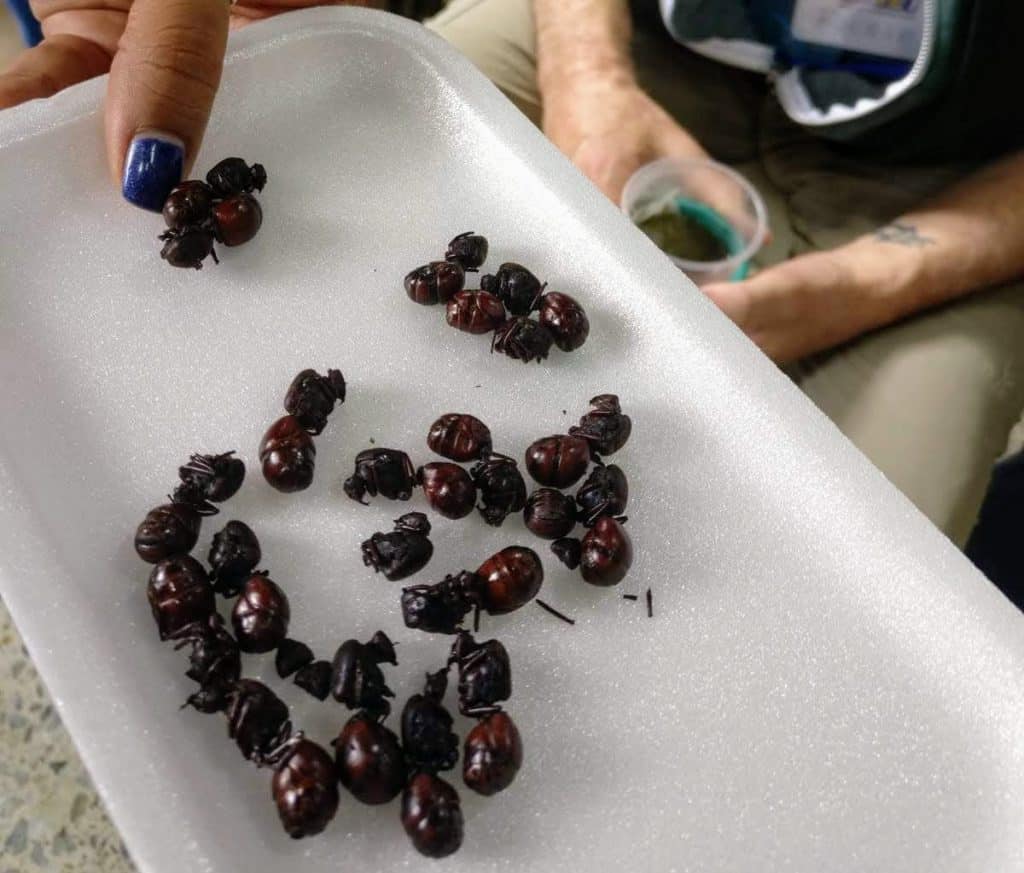 We found an amazing seafood restaurant called Cevicheria Central where I had Moonshine Zipa IPA. They had all sorts of ceviche, fresh fish, octopus and shrimps. We had shrimp with garlic and seafood skewers. This place is a must if you like seafood! They also have an English menu, which helps if you don’t know Spanish. 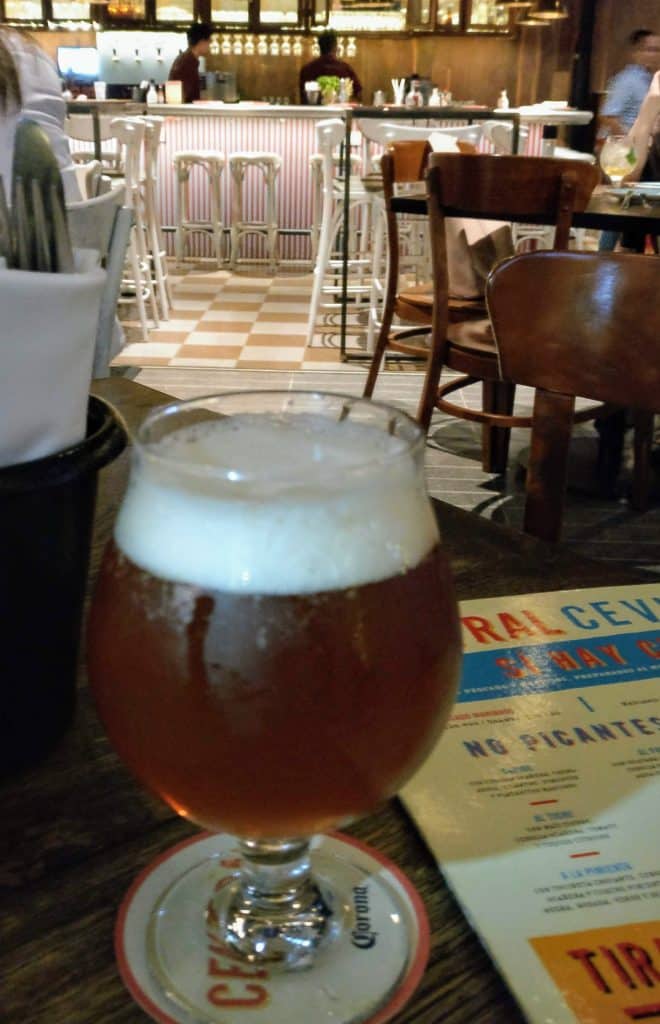 We also played a game called Tejo, at Club De Tejo La 76, the national sport of Colombia. While played we had a beer called Poker (SAB Miller). 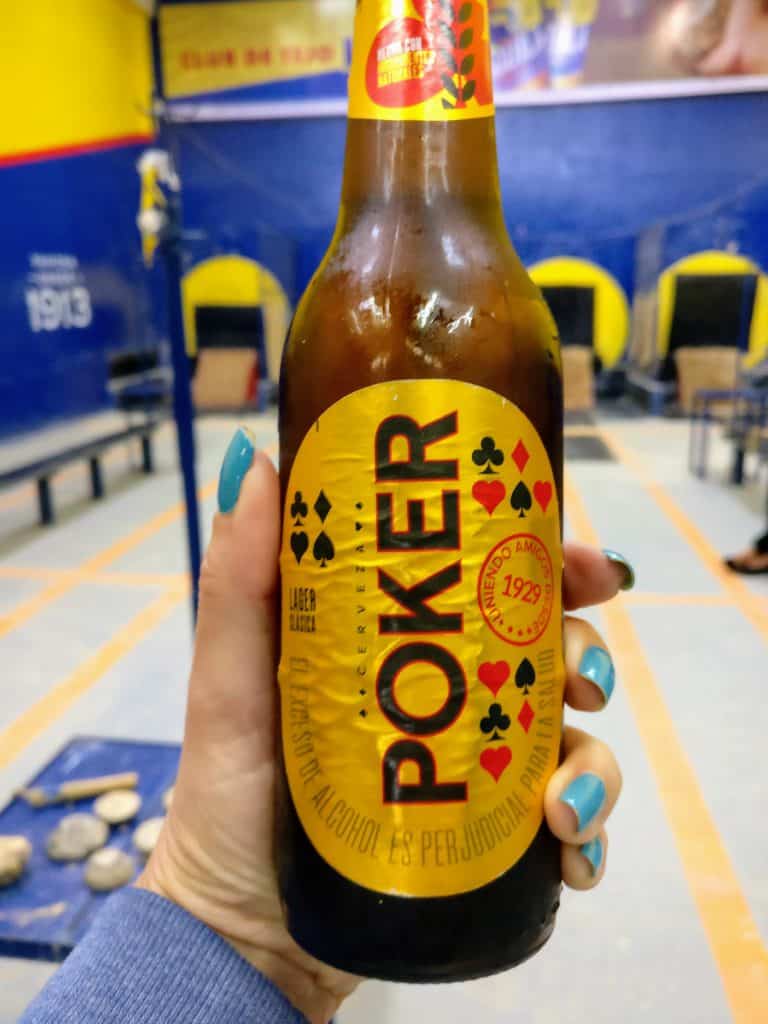 Per Wikipedia, the game consists of throwing a metal puck/disc (called a tejo), across an alley at a distance of approximately 18.5 meters (ring to ring), to a one meter by one meter board covered with clay and set at a forty-five degree angle.

The tablas are located at every extreme of the field. The tabla consist of a wooden frame that holds clay and a protective board to keep the tejo from hitting other elements or people in the neighboring area. Inside the frame, there is a metal pipe or car spring strong enough to withstand the continuing impacts of the tejo. This pipe is the target where the tejo is meant to hit. The pipe is set at the same angle as the post’s frame (45 degrees).

The tejo must be thrown from within the throwing area, and the goal is to impact the inside of the target at the other extreme. A chief characteristic of the sport is its use of small, exploding targets that contain gunpowder, commonly known as “mechas”. These usually triangle-shaped envelopes with explosive material inside are set on the edges of the pipe where on impact with the tejo explode loudly creating a sound similar to the one created by a small revolver upon firing.

Medellin is a modern, sophisticated city with a spring climate all year around. Population of Medellin is 2.5 million. It was awarded as the most innovative city in the wold in 2012. Medellin is the only city in Colombia with a Metro (train system) which makes a huge difference for the people in Medellin. The city bustles with non stop activities, museums, parks, mountains & trendy restaurants.

Since we were on a tour we didn’t have much time on our own to explore the beer scene in Medellin but we did visit one local brewpub.

Cerveceria Maesttre is a local craft brewpub. They had 3 of their beers on tap which you can get by the pint or a pitcher. Hazy IPA, Biter ESB and Porter (all 6% abv). We ordered a pitcher of each to try them all. I liked the Hazy IPA best followed by the Porter and then Biter ESB. I highly recommend this place for a visit. 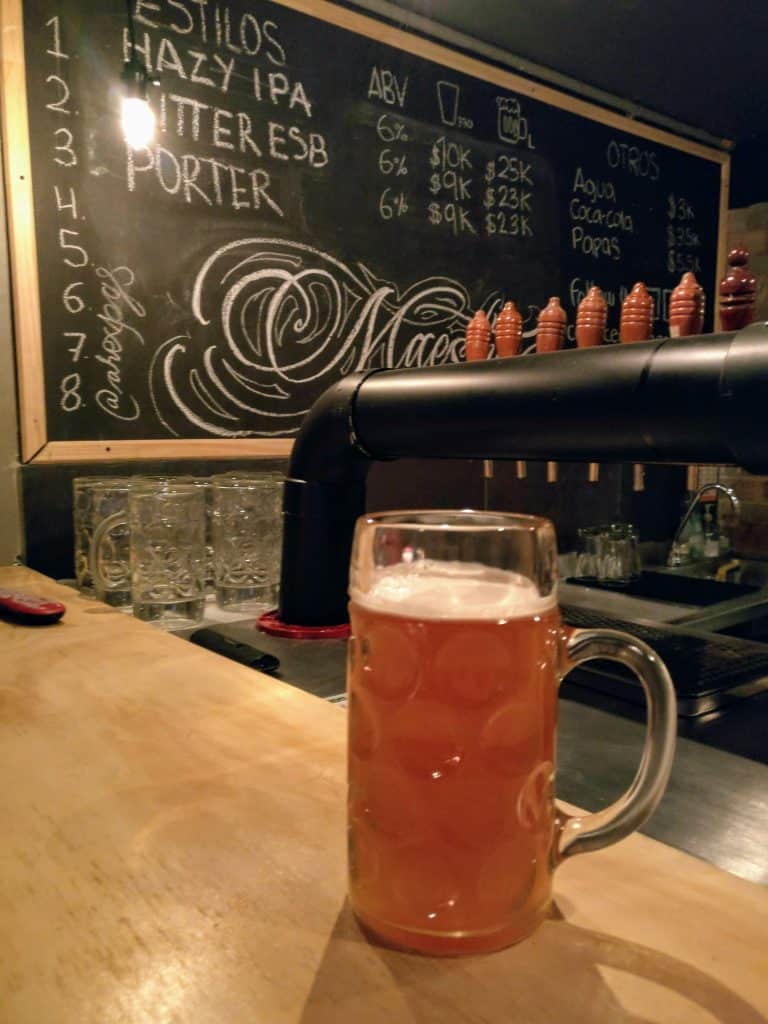 The next city we were visiting was Cartagena. To get to Cartagena we took a short local flight (~1 hour) where we found a local beer bar in the airport (Aeropuerto Internacional Jose). We tried the Coffee Porter and Beer Express IPA (first time drinking craft beer at 7 am). 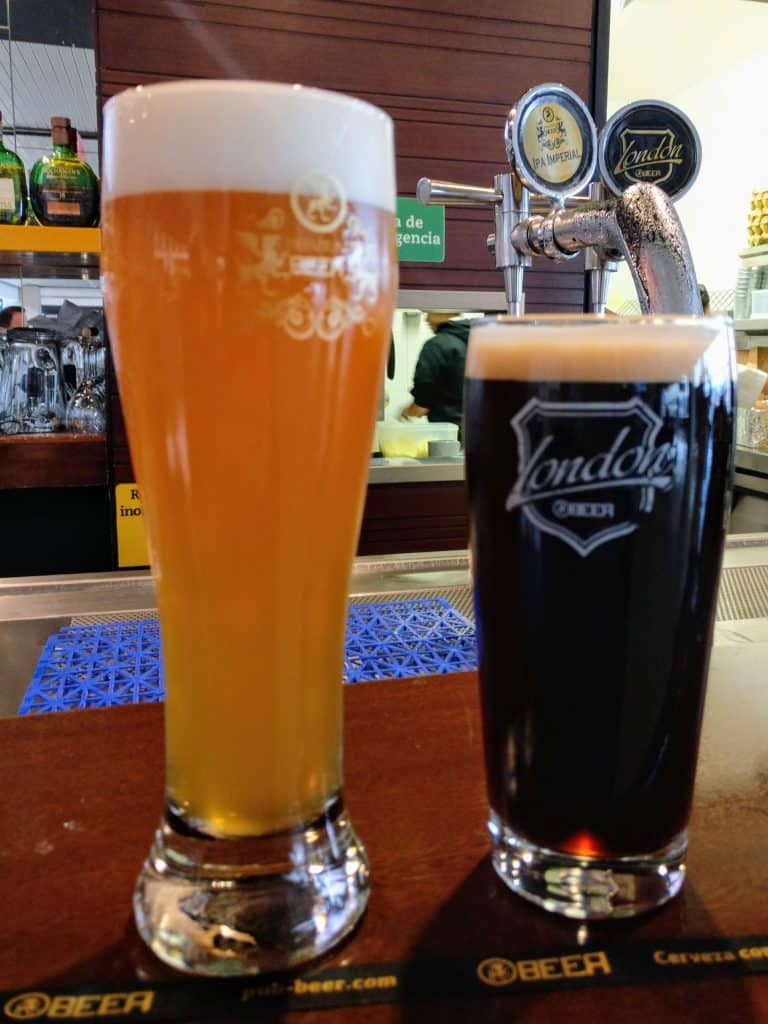 Cartagena is a port city on the Caribbean Sea. Old Town, founded in the 16th century, with squares, cobblestone streets and colorful colonial buildings makes this city a great place to visit. Only a 3 hour direct flight from Miami.

We checked out a beer bar called Beer Lovers: 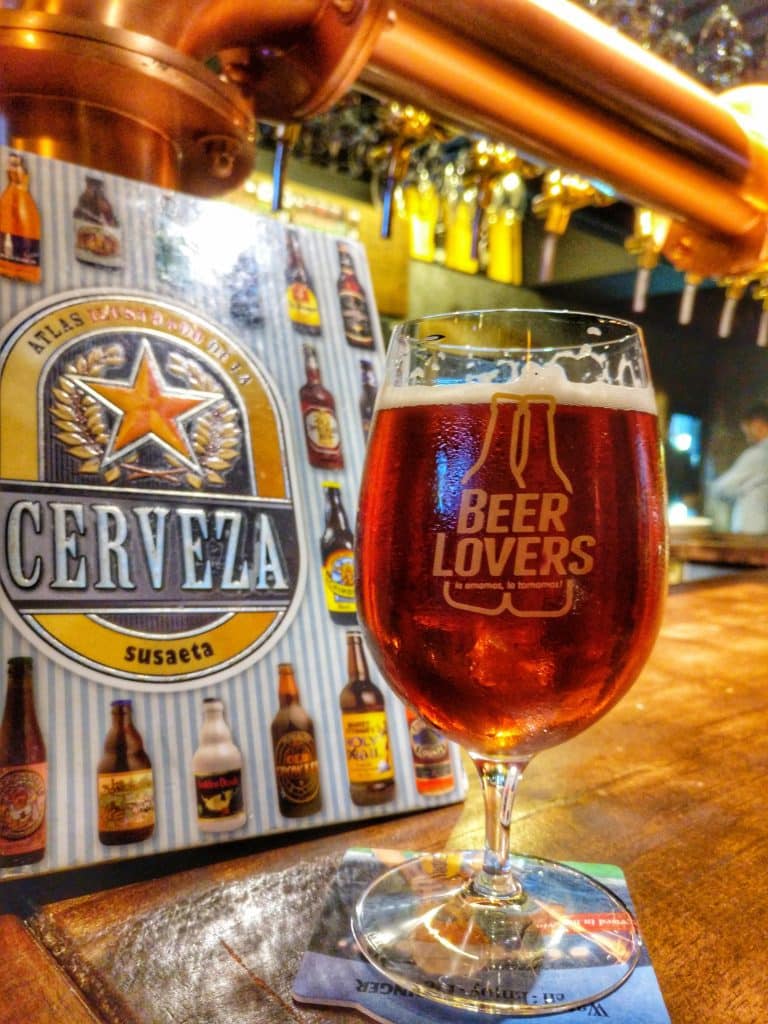 Beer Lovers has a huge selection, and you’ll be able to find Colombian made craft beer as well as international beers here that you won’t find anywhere else in the city. We even found an empty bottle of Jester King there. 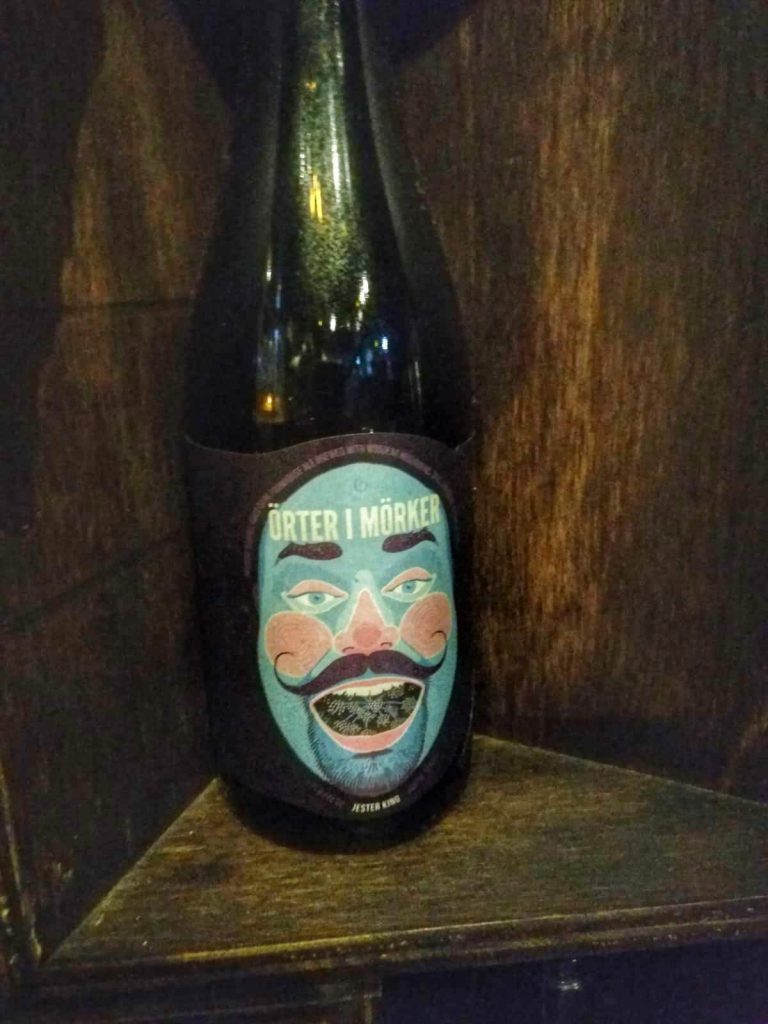 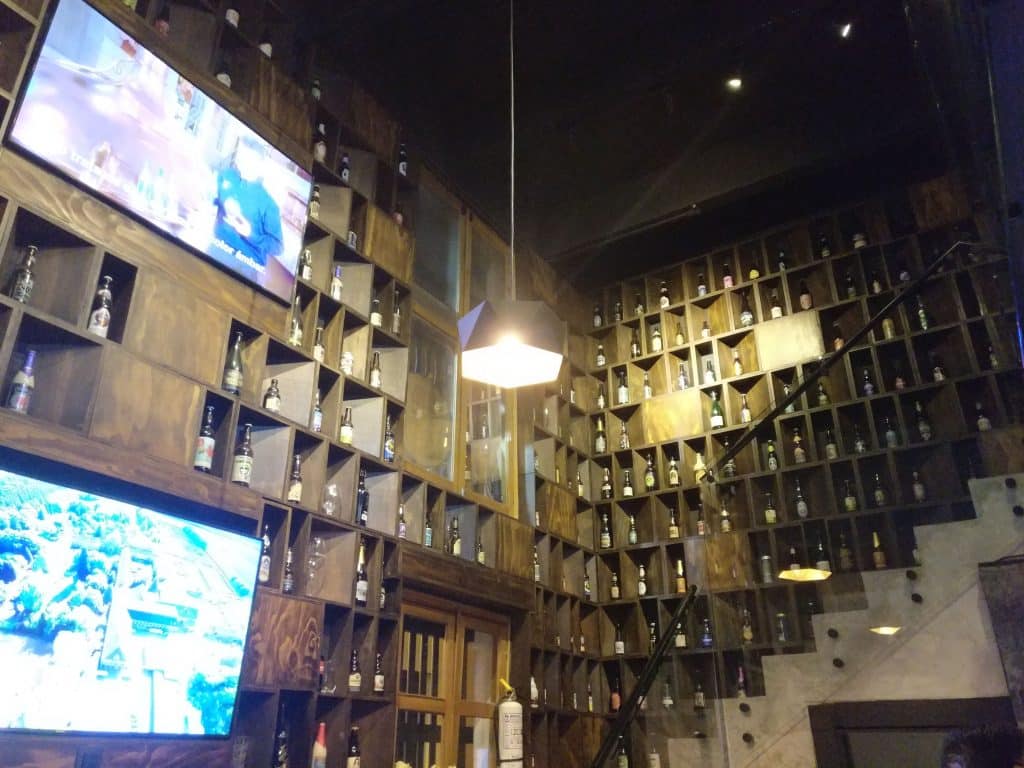 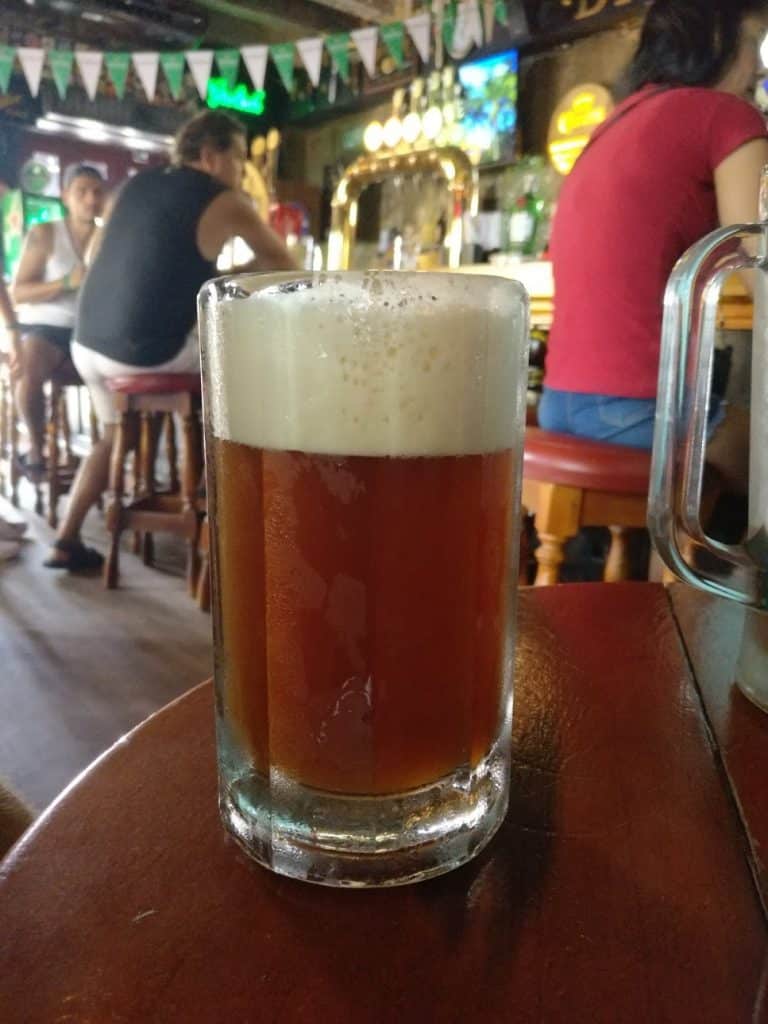 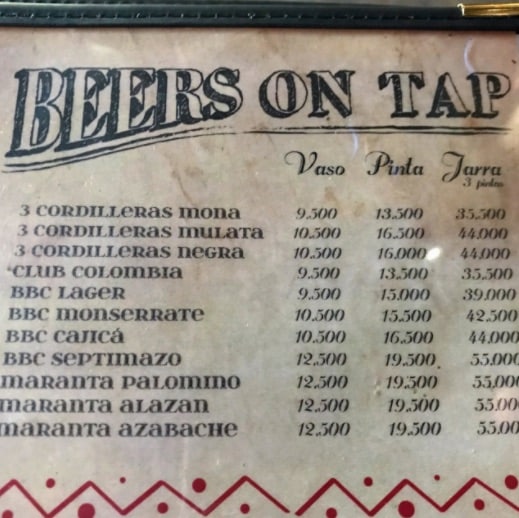 We decided to try a beer called Maranta Alazan. We bought a pitcher and a pint of the Maranta Palomino. The red was good and the pale ale was decent. Fun place to visit and watch the the soccer games at. 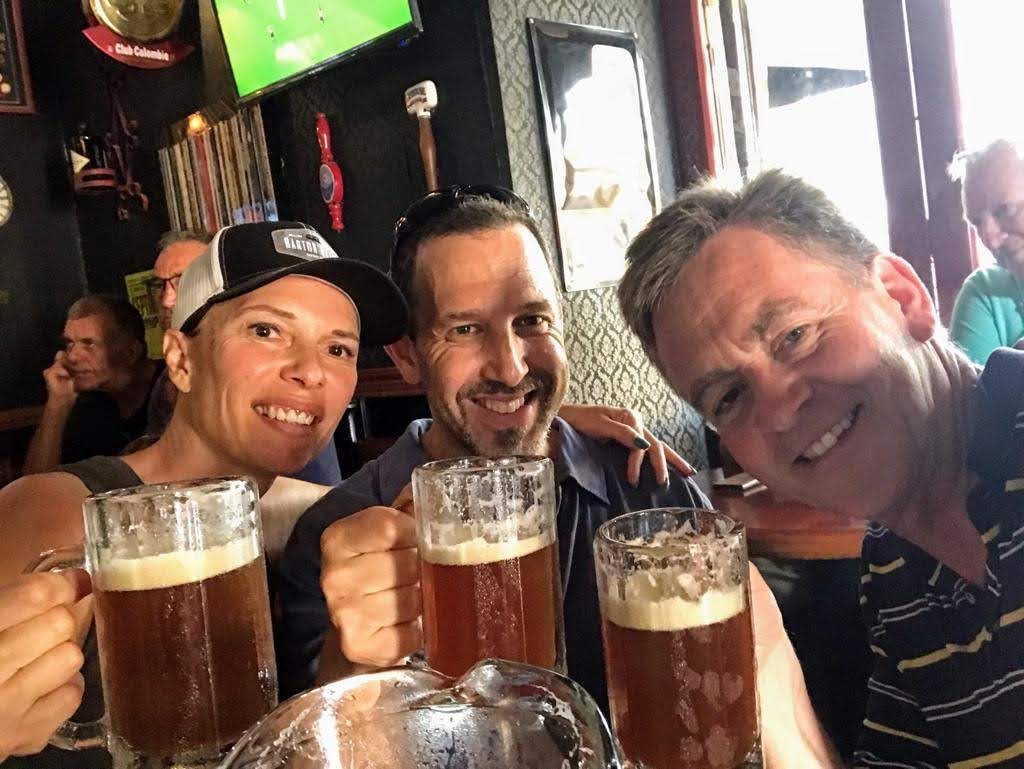 Cartagena Craft Beer, this place is pricey but has a good selection of craft beer on tap, friendly staff, great music and a fun vibe. 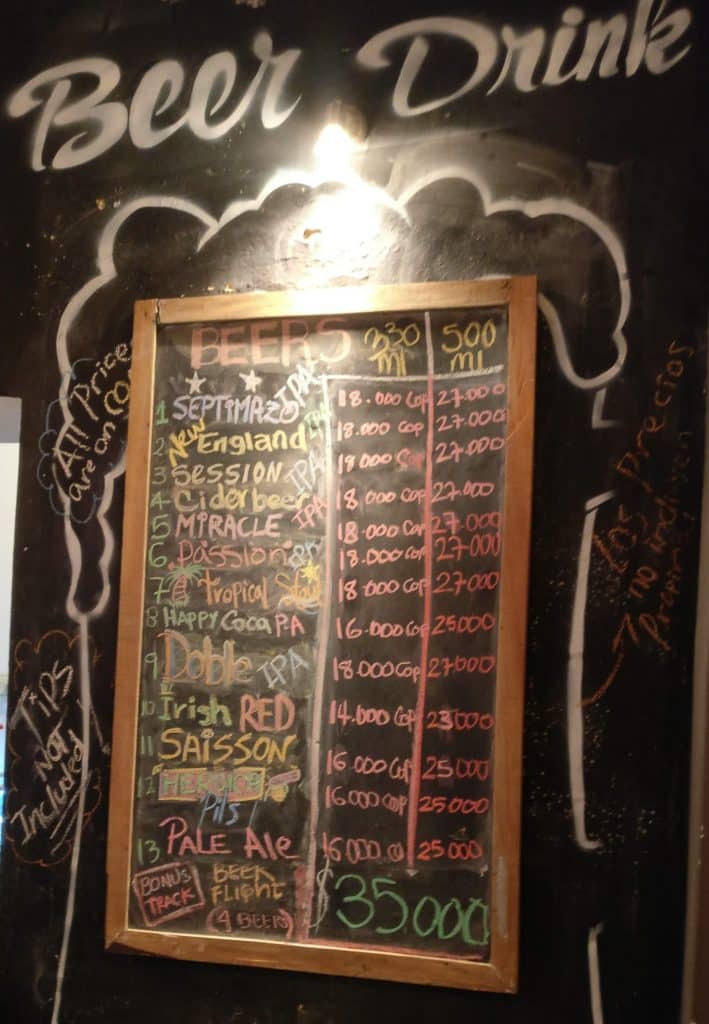 While in Cartagena we ate lunch at La Cevicheria, known for its tastiest and freshest local seafood dishes and visited by Anthony Bourdain. Besides the delicious lobster paella they had a craft beer which I didn’t see before called Pacho Wheat by 13 Pesos. 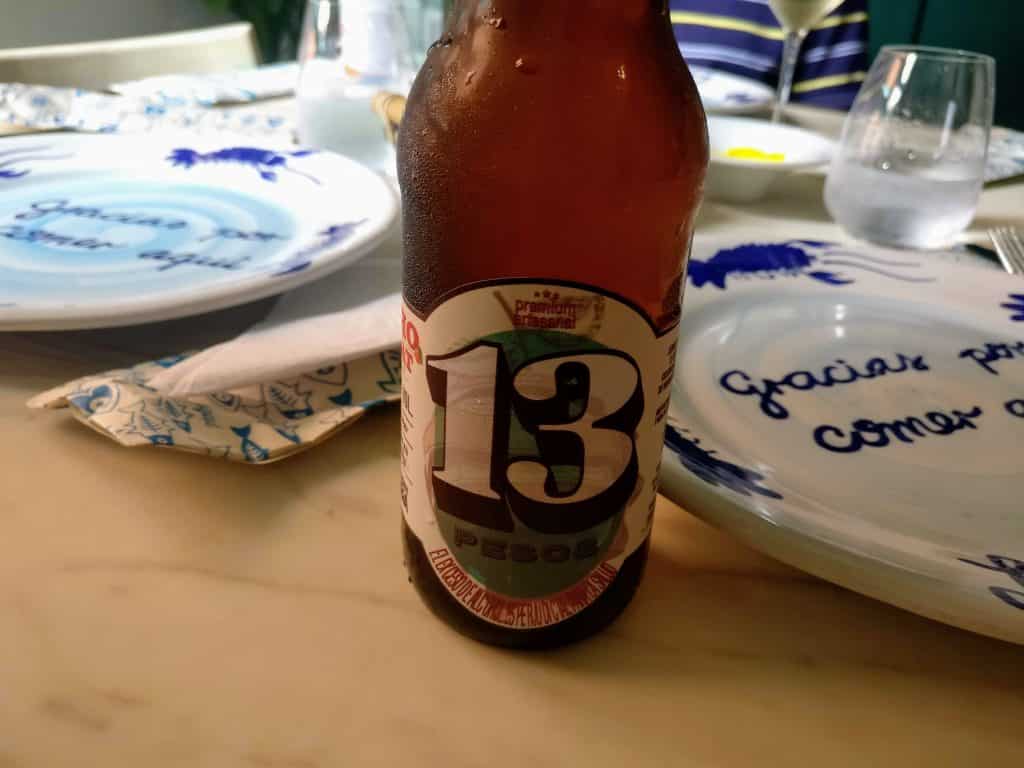 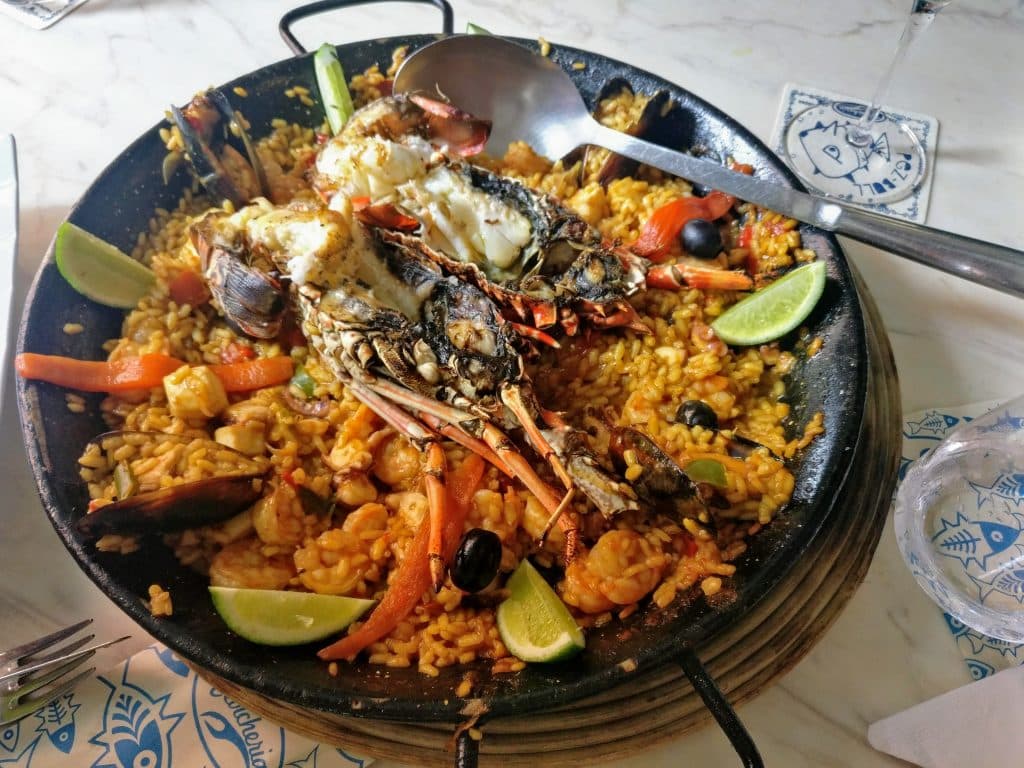 As craft beer grows in popularity, there have been more and more bars serving craft beer in Colombia.

Shout out to our tour manager at Gate 1 Travel Juan David (Juan in a million 😉 for helping us find these local beer places and restaurants.