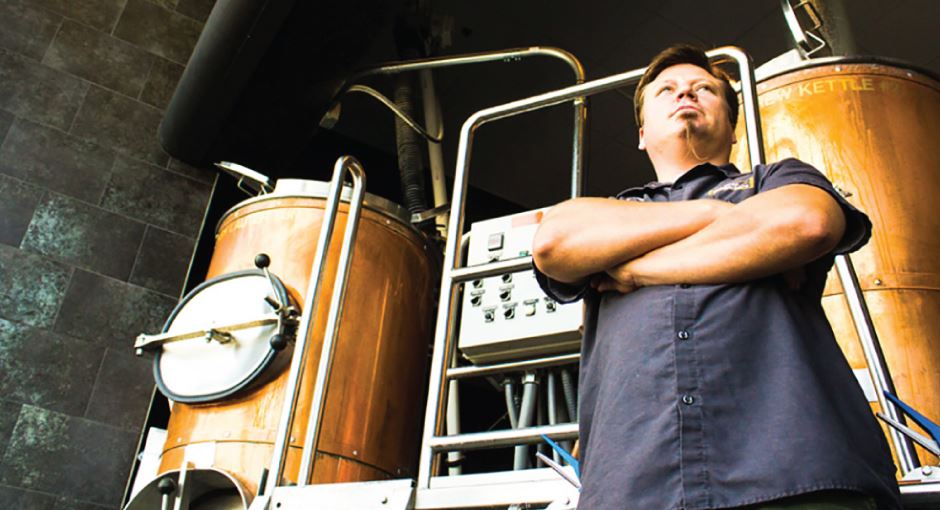 I am sure you are familiar with the idea of a movie theater that serves beer, but how familiar are you with the one that brews beer?

Flix Brewhouse – now rebranded as America’s Cinema Brewery – is the first movie theater in the world to combine a theater, a restaurant and a fully functioning microbrewery.

Flix opened in Round Rock in June of 2011 and has become a staple for movie goers and craft beer lovers alike. The theater houses a microbrewery, six state-of-the-art theaters featuring stadium seating gliding tables and the Flix Mix lounge and café that is open to the public seven days a week with or without a movie ticket. The lounge features Flix brews, 38 additional guest beers, wine and non-alcoholic specialty drinks. What you won’t find is macro beer, but Flix has plenty of options to please a wide range of palates. 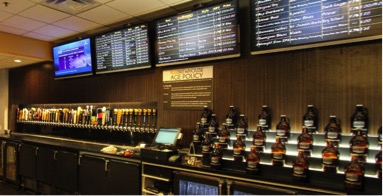 Running a business that combines three different business models is quite a challenge according to Greg Johnson, Marketing Director for Flix, “it takes roughly over 200 employees to operate a business of this size and complexity”. On average, Flix serves 800 meals to approximately 2000 patrons on a busy night and goes through as much as a dozen barrels of beer on a busy weekend.

When most people walk through the door of the theater, they unknowingly walk right past the brewhouse. The original 3.5 barrel system is situated at the front of the building along with the cold room, so next time you visit, be sure to stop and take a peak. 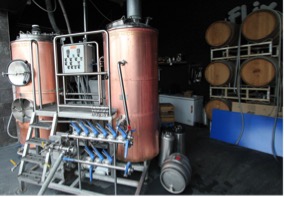 Head Brewer Justin Rizza, formerly of Austin’s own Independence Brewing Co., likes to play around with styles and create non-traditional beers. The brewery hosts seven mainstay beers, including the popular Luna Rosa Wit that is spiced with coriander and rather than the orange peels and includes blood orange puree. The pride and joy of the mainstay offerings is certainly the signature Saison de Walt developed in honor of Walt Powell whose official title was Vice President of Operations, but anyone who knew him will tell you he was the all-around beer king. Walt passes suddenly in 2013 and the brewery produces a special seasonal series of the Saison de Walt in his honor that is released on June 4th, the anniversary of his passing. 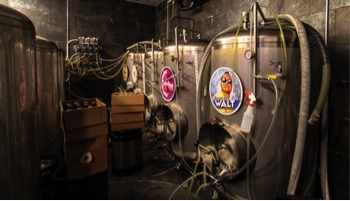 Given Justin’s endless creativity, the brewery always has a series of limited addition beers on the tap wall. Currently they are featuring the Round Rock Lager – a Dortmunder Export style lager, Killebrew – a first generation bourbon barrel aged dry stout, Brewhouse Shandy, and West Coast Gentleman – a West Coast IPA that has become their fastest selling beer to date.

The brewery also produces an annual collaboration beer. This year’s beer was brewed with Circle Brewing and brewed at both breweries. Double Impact is a dark session saison that you can find on tap around town, as well as in the theater.

So what’s next on tap for Flix Brewhouse? Lots of expansion. The brewery is expanding to a seven barrel system by the end of the year and the theater is currently upgrading their auditoriums. Flix Mix is also getting an update to transform the lobby into a destination craft beer location – no ticket required. Flix currently has two other locations in Des Moines, Iowa and Carmel, Indiana where they target underserved markets with a burgeoning craft beer scene. The next expansion will be Sugarland Texas late in 2016. All locations operate on a seven barrel system with their own head brewer and produce the same core beers and one seasonal, outside of that the brewers are free to create their own beers. In fact, Carmel Lead Brewer Chris Knott just took home 3 medals (one gold and two bronze) at the Indiana Brewer’s Cup.

Aside from expanding, Flix is also introducing a new loyalty program called “The Circle” that will launch at all locations this summer. Here is the inside line on the program:

• After sign-up at your next visit to Flix, your next meal (all food on your bill) will be 20% off.
• You will receive a free ticket to use during the week of your birthday.
• For every dollar you spend on non-alcoholic purchases, you earn 8 points. Those points can be redeemed for $1 off for every 100 points earned at any time.
• You receive an automatic discount on Alternative Content showings (non-first run movies that we show monthly).
• 10% off merchandise purchases at Flix.
• Tiered benefits – as you earn lifetime points, you can cross thresholds for additional perks and gifts from Flix. 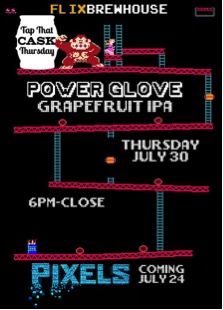 If that isn’t enough for you, Flix has also introduced a monthly cask night. This month’s cask night is on July 30th at 6pm!

It’s a buy-the-beer, keep-the-glass night with some really great glassware (not just a standard shaker pint). Craft Beer Austin will be on hand to help them tap the “Powerglove IPA” which is the West Coast Gentleman with grapefruits added.

This beer will be in limited supply, so be sure to join us Thursday for this great event!