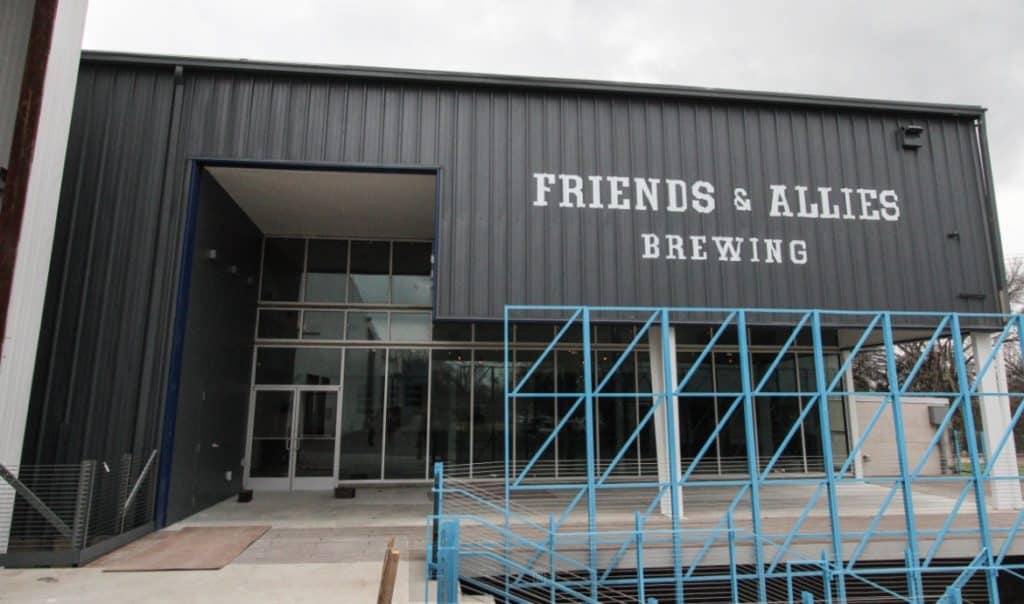 Certainly by now you have encountered a Friends and Allies brew around town, (Noisy Cricket anyone?). Their first two beers have been on the market since early 2016 thanks to a special alternatating proprietorship agreement with 4th Tap Brewing Co-op. The agreement allowed Friends and Allies to brew their beer on site while 4th Tap Co-op was not using the space, a creative arrangement. Since then, Ben Sabin has been slinging beers all over town while Devon Ponds was working on opening the brewery on the east side of town.

Ben and Devon have a friendship that has spanned a decade. They were living in the same apartment complex and one day while Ben was home brewing, Devon saw his equipment on the balcony and simply walked upstairs and introduced himself. The pair very quickly realized that they knew all of the same people and the rest was history.

According to Ben, the name of the brewery was derived from the word Tejas, whose true meaning is friends or allies, and that reflects their strong sense of community, “it reflects our network in the community – friends in the brewing community that helped us get started, and allies with all the bars and restaurants around town that gave us a chance”.

Even though Ben and Devon both have a strong background in beer, Ben as the cellarman at Thirsty Planet and Devon the financial manager at Port Brewing Co / the Lost Abby. they decided to recruit Nathan Crane as head brewer for Friends and Allies to produce their west coast style brews. “Nathan also came from Port Brewing / the Lost Abby, so I knew he would be a perfect fit, adds Devon”.

The core four: Springdale White Ale, Noisy Cricket Session IPA, Urban Chicken Saison and Fresh Coast IPA are all available at the brewery along with a seasonal, Kick Start, and eventually  experimental taproom only selections. Recently the recipe for Urban Chicken was tweaked to include a new yeast strain and the team will continue to refine their recipes to fit the market.

The brewery is located right next to the Austin Bouldering Project and the future home of Austin East Ciders. The spacious taproom is climate controlled with two flat panel televisions and wifi capability and includes a large outdoor patio with picnic tables.

The 8,000 square foot brewery houses a three vessel 30 BBL system with two 60 BBL and two 90 BBL with enough space to stack kegs practically to the ceiling. The team invested in their own canning line that allows them to print directly on the cans.For now the brewery will continue to self distribute to the greater Austin area including as far south as Kyle.