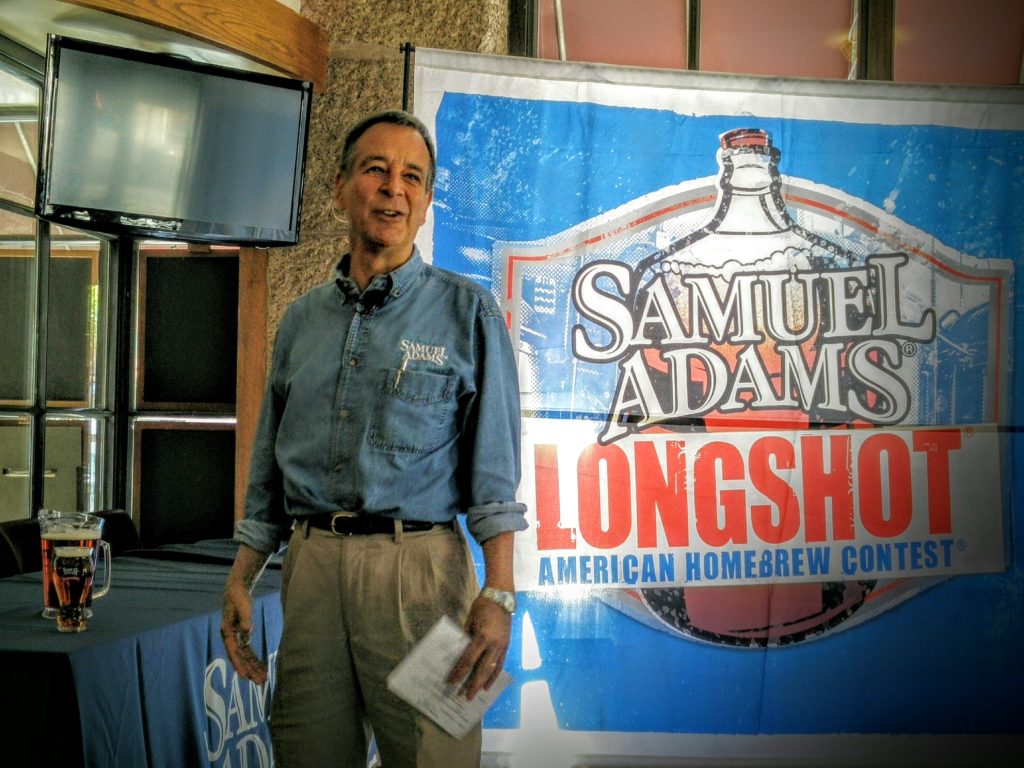 During our trip to Denver for the GABF, we had an opportunity to meet with Jim Koch the founder of Sam Adams (Boston Beer Company).

As we waited to meet Jim, there was an amazing brunch (eggs, pumpkin french toast, sirloin, lobster rolls, jambalaya, so much more and desserts). Instead of coffee, I tried the Kosmic Mother Funk Grand Cru (first time having a beer at 9am). This Belgian style ale is at 6.5% ABV and is a wild, funky and complex ale aged for just over a year in Hungarian oak tuns, with a depth of flavors ranging from earthy and spicy to floral and sweet.

The 2015 Kosmic Mother Funk Grand Cru Tasting Tour Will Kick Off in Boston and Travel to 20 Cities, With the Final City Voted On By Samuel Adams Drinkers. Tour Dates for Austin will be October 26 – November 1, 2015. 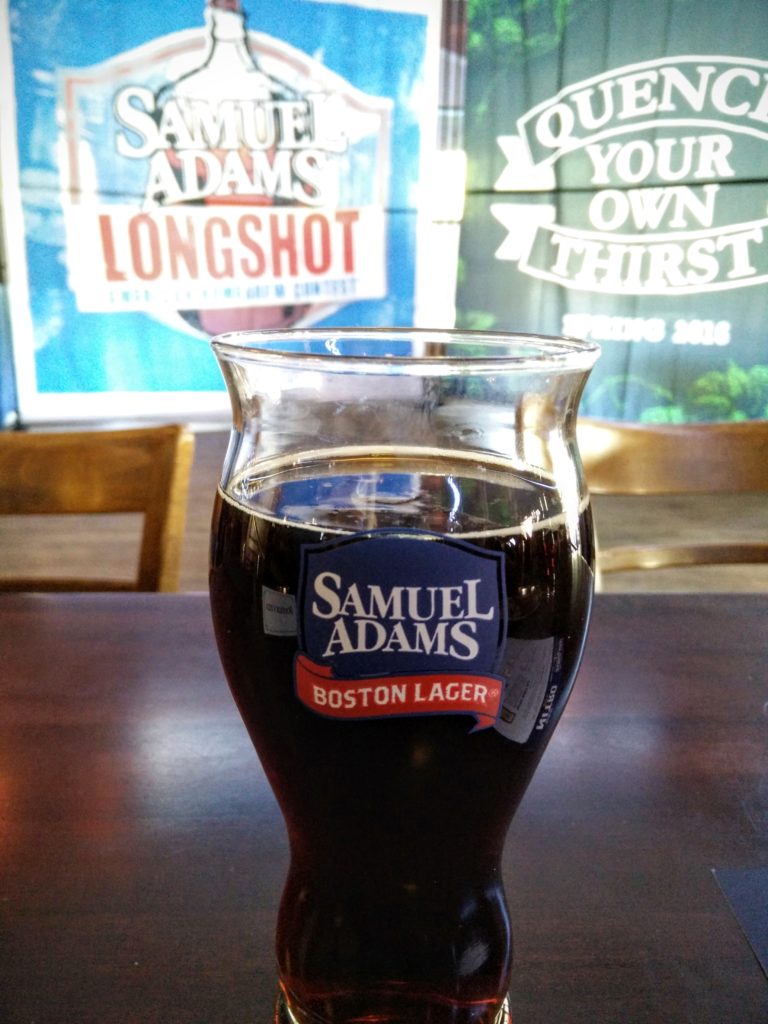 Jim is one of the most entertaining and knowledgeable role models in the Craft Beer industry I have met. Jim started home brewing in his kitchen 31 years ago. He emphasized that the roots of craft brewing began in home brewing. He talked for a little bit about GABF and then says “enjoying each others company that is what beer is all about”.

Jim introduced Sam Adams new Nitro beers that will be available in February 2016 in cans and on draft. To create that distinctive nitro delivery, the cans will contain a widget(much like the Guinness cans) and draft will be served through a nitro faucet with the correct gas mix.

“Nitro beers are known for their captivating cascade and smooth creaminess. Yet, for many, nitro is solely linked to stout. As Sam Adams, we experimented with a wide variety of styles and discovered that nitro truly can be the missing fifth beer ingredient.” 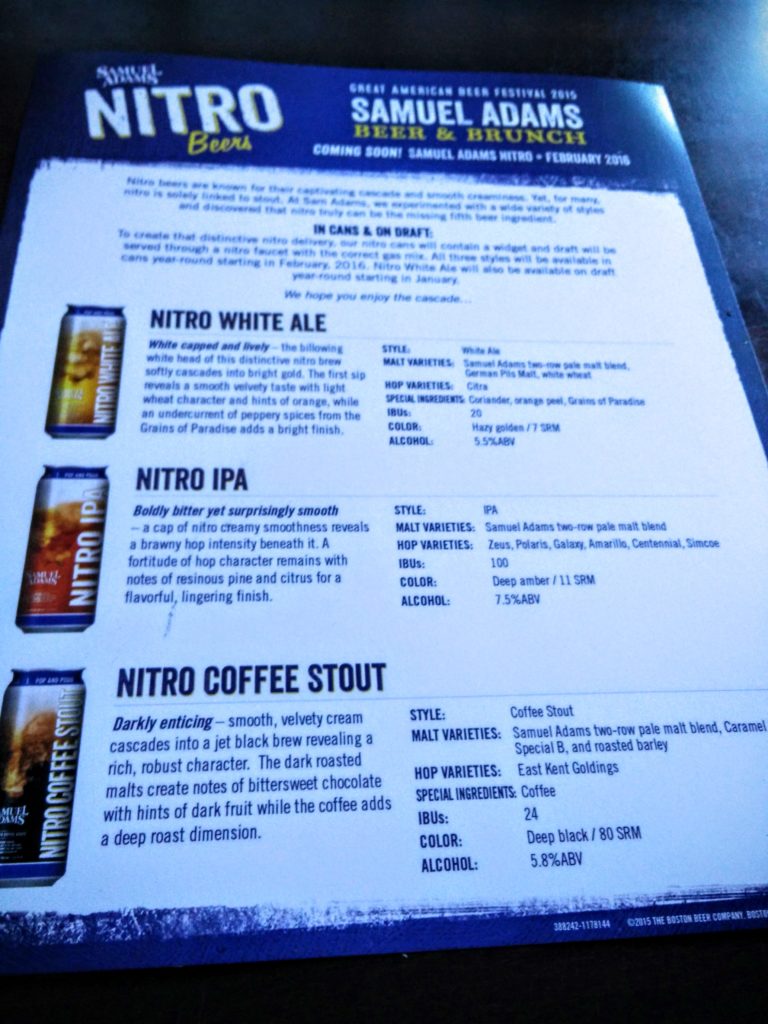 Afterwards, he announced the 2015 winners of the Sam Adams LongShot home brewing competition.

Tim Thomssen’s Raspberry Berliner Weisse, Kevin Nanzer’s Belgian Golden Strong Ale, and Samuel Adams employee Colin Foy’s Flanders Red Ale. They will have their beers featured in the 2016 Longshot Variety Pack, available nationwide next spring. These three homebrewers will join an impressive group of past LongShot American Homebrew Contest winners. I got to try the Raspberry Berliner Weisse and the Belgian String Ale, both were delicious.

“There is a sh*t load of raspberries in this Raspberry Berliner Weisse!” – Jim Koch 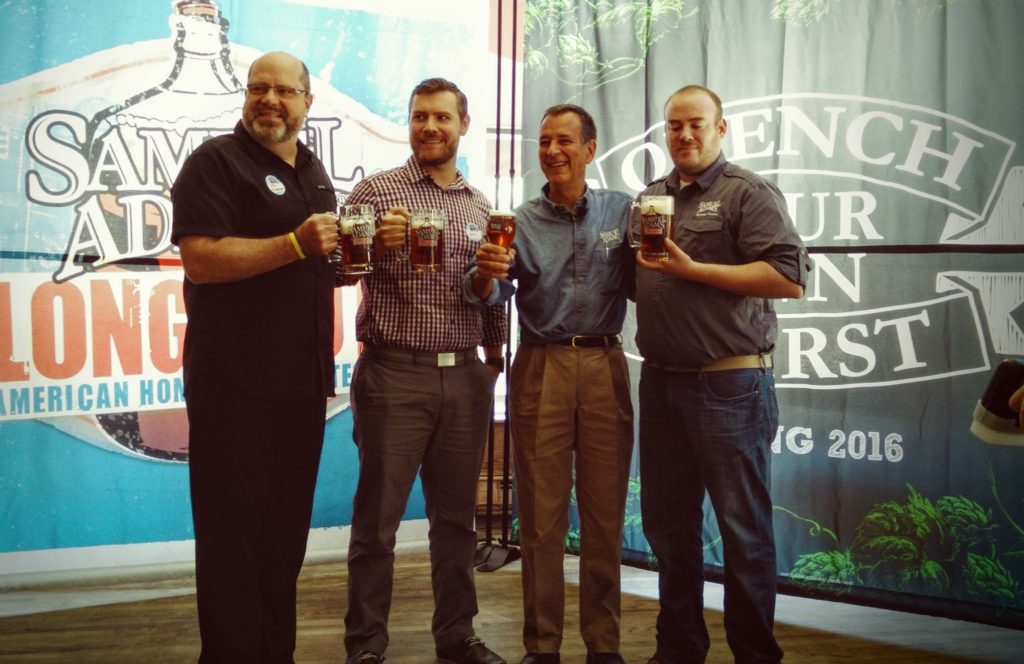 Flounder Brewing Co. from New Jersey, was selected by Sam Adams as 2016 Brewing the American Brewer Experienceship Winner. They will receive a trip to Sam Adams Brewery for coaching and mentorship from the experts from Sam Adams. They will also have an opportunity to brew a collaboration beer with Sam Adams.

The Samuel Adams Brewing the American Dream Program also helped Infamous Brewing here in Austin previously. Thanks in part to the loan they received through Samuel Adams micro-lending partner, Accion, Infamous Brewing was able to meet the startup costs and have enough cash flow to get their new business of the ground. Since opening, they’ve worked hard to grow their business As part of the Brewing the American Dream Program, they’ve attended a Speed Coaching event in Austin and had the opportunity to work one-on-one with brewing business experts.

To finish up, Jim said that he has been taking notes on scraps of paper throughout the years. He recently went back to those notes to see if he could use any of them to write a book. It worked! Jim announced his new book called “Quench Your Own Thirst“, which will be published in April 2016. The book will be about what Jim has learned in his 30 + years in the beer business.

We were able to chat with Jim for a little bit afterwards. When we told him we were from Austin, he said that he and Davis Tucker founder of NXNW (and previously with Cooper Tank) used to “compete” on 6th street by Maggie Mae’s. Jim mentioned he had great respect and admiration for Davis and was genuinely happy when we told him the second NXNW was doing well. 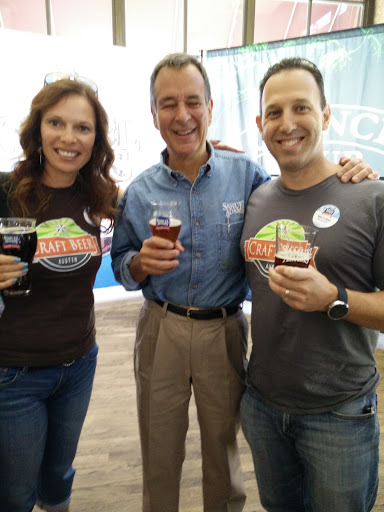 His last comment was “not enjoying your beer and each others company is alcohol abuse.”