Keith Kilker quietly excuses himself from a conversation each time a customer walks into Guadalupe Brewing Company. He extends a firm handshake and welcomes patrons to the brewery he and his wife, Anna, opened just four years ago. People know and love this place. Quite a few of my beer aficionado/connoisseur friends recommended this brewery, and now I understand why.

The hospitality doesn’t stop at the front door. As I walked into the taproom of Guadalupe brewing, Anna was quick to greet me and introduced me to Jason Barrier, their lead brewer. Jason is genuinely nice and is very passionate about making beers that have an appealing and balanced flavor. He has worked for Guadalupe Brewing for the last three years and has slowly taken over the lead brewer job (and is working on becoming a part owner!) Right now, Guadalupe Brewing has a team of 4 full time and 3 part-time employees plus the owners. 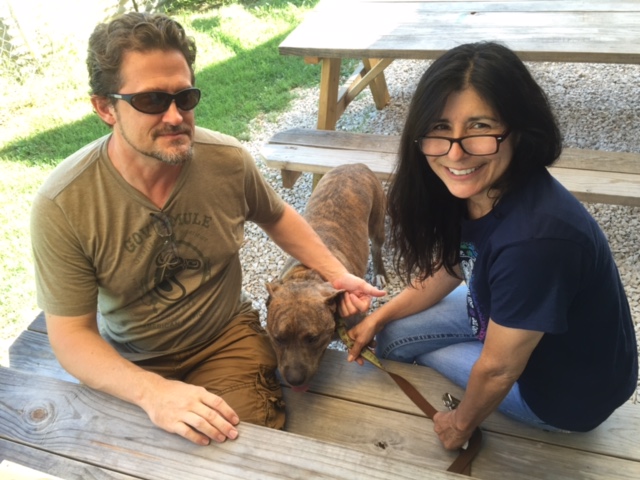 Keith and Anna, who are both native Texans, own 100 percent of Guadalupe Brewing. They are attentive to details such as hospitality and since they own the place, there are no compromises when it comes to taste and quality. They do not rush their processes to get more beer onto the market, and they prefer locally produced spices and ingredients in the beers they make with absolutely no extracts.
Their blends are modeled after beers from Europe and the Pacific Northwest in the United States. Keith and Anna began their travels 10 years ago, and as they experienced flavors that were not available in Texas, they decided to recreate them and share them with their community. To learn the science of brewing, Keith attended and graduated from Siebel Institute and later trained as a brewer in Colorado.

The outside temperature was a hot Texas 100f when I went for a tasting. It was quite a bit cooler inside the tasting room, which has wooden tables that are supported by oak barrels. The outside area has plenty of fans and misters to keep the heat down. Once you get one of their cold beers in your hand, your focus changes completely. 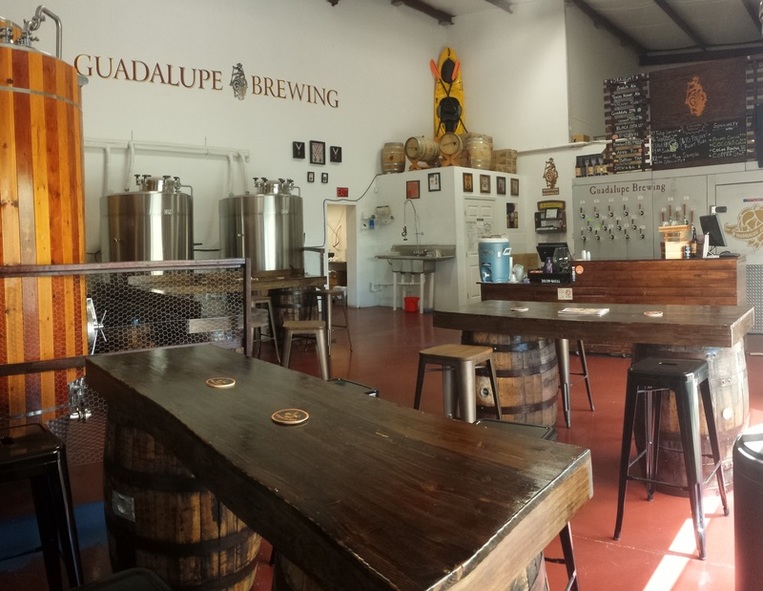 Guadalupe Brewery utilizes two 20-barrel, one 15-barrel and two 10-barrel fermenters to make their brew. They are looking to purchase a 30-barrel fermenter by the end of this year. They brew their experimental recipes in a 1-barrel fermenter. They also have two 20-barrel, three 10-barrel and one 8-barrel Brite tanks that hold their beer in a cold room until it is ready for kegging or bottling. Dairy equipment was repurposed to be used as part of their brewing process, but that all goes away in October when new equipment arrives. 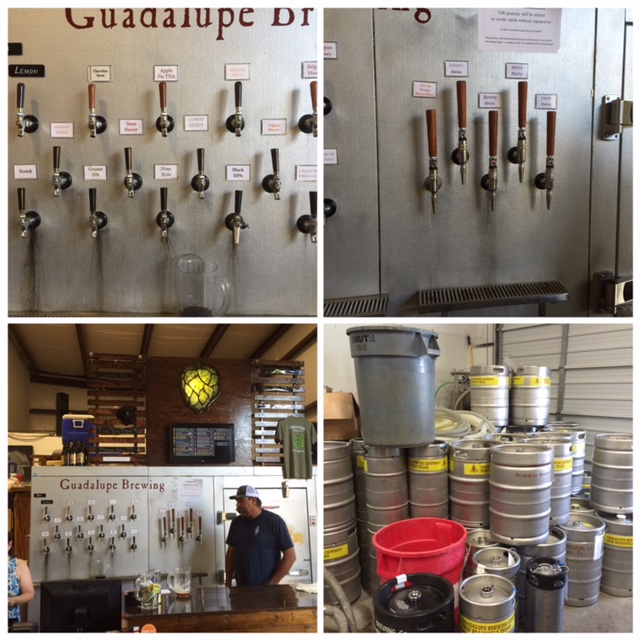 Okay…this is the part I’m the passionate about, these creations are unique and extremely true to their recipes and profiles.

Scotch Ale, ABV 8.17
Complex and bold with a beautiful caramel color, it is a big but approachable beer full of body and high in alcohol; hints of roasted malt flavors are developed during the aging process in barrels of American Oak.

Belgian Texas Honey Ale, ABV 7.75
Amber/gold in color with a head that is creamy white and a full-mouth feel. The flavor profile is complex with orange and fruit and a taste of honey, enough fruit and spice to the nose without taking away the refreshing character.

Texas Honey Ale, ABV 7.32
Golden color with a super drinkable, smooth sweet taste from the Texas honey used in its production. It’s creamy in texture and has a citrusy and herbal aroma. Guadalupe Brewing gives part of the proceeds from beer sales to honey bee research.

Gruene Anole, ABV 6.5
Indian Red Ale, a great choice for malt and hop lovers with aromas of herbs, fruits and spice. Full malt character that creates dark caramel and toffee flavors, and the color is like a rusted red.

River Ride Session Blonde Ale, 5.28 ABV
This is a light in flavor and easy to drink beer that you can enjoy on a very hot day while tubing, hiking or simply relaxing with friends. It’s a delicious ale with a hint of honey that stands out from the heavy and hearty beers.

Gruene Session IPA, 5.66 ABV
Crystalline light golden color with a citrusy nose and taste that enhances the presence of hops, it is an easy-to-drink IPA that has a balanced giving you a break in alcohol from the usual 9% creepers of IPA’s in the market.

Apple Pie Style Texas Honey Ale, 8.54 ABV
Wow! A very unexpected but ever so pleasant flavor and aroma, golden in color with a cloudy not filtered body, incredibly fragrant with notes of cinnamon, nutmeg, all spice and a sweet taste. Jason mentioned that this is a particularly difficult beer that can take up to a month to get it finished, yet still needs attention.

Chocolate Stout, 8.89 ABV
Locally roasted coffee (Texas Artisan Roasters) combined with organic maple syrup produced this pitch-black color with a foamy tan head that starts tall and thick. The first aroma is fresh brewed coffee and after that comes the chocolate taste that remains in your palate after a long finish filled with slightly bitter coffee and rich cocoa.

Plans for the future: Guadalupe Brewing is looking forward to have a more efficient brewing system as well as their own canning system, but in speaking with Keith this will probably be as big as we get as far as production goes. They like small and local.

At this moment you cannot buy their beers to go from the brewery( Thank You TABC!), however some of them are available at different stores. Please visit their Facebook page under “notes” to find available places to buy it locally in Austin, or you can enjoy them on tap at places like Opal Divine, Craft Pride, Bangers, Draft House, 1 on 1 Bar and other exclusive places in San Antonio, Seguin, Houston and Corpus Christi.