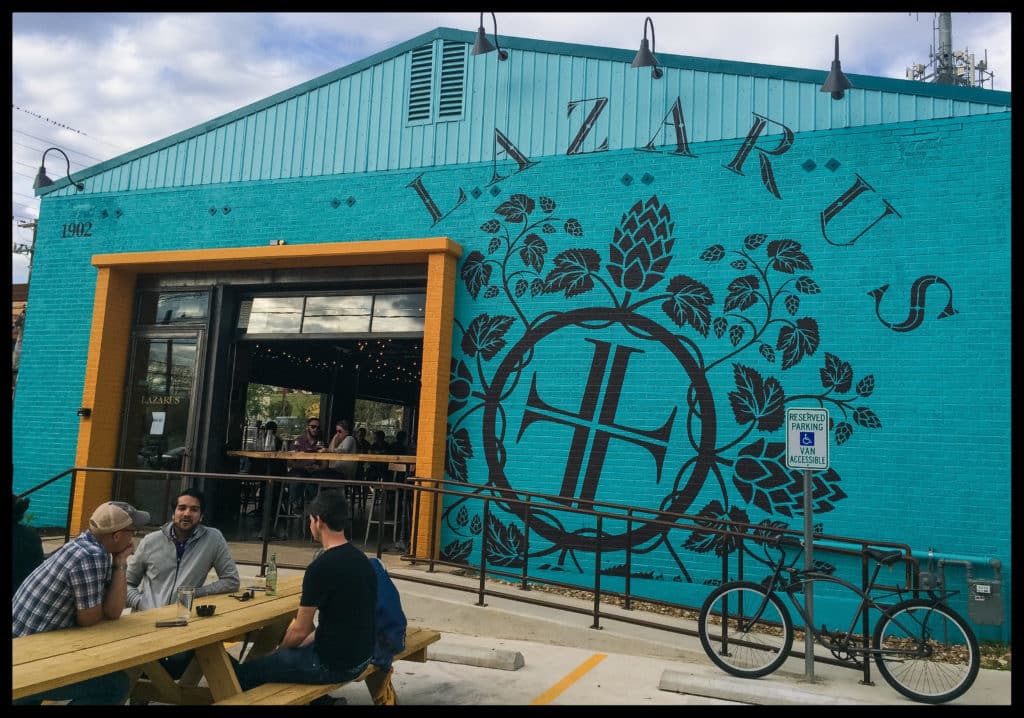 “Beer is proof that God loves us and wants to be happy” is a quote you’ll see strewn about brewery walls, t-shirts and posters around the globe. Although there is quite the controversy about whether Benjamin Franklin ever even said this (in fact, he actually DID say it about wine!), its sentiment rings true for Lazarus Brewing Company’s founder Christian Cryder. With Lazarus, Cryder hopes that his brewery becomes a venue to help build community, relationships and for his patrons to “share life.” He says, “I’m really passionate about beer, coffee, food and community. It was our intention to create a space where people can come enjoy a drink together with friends and share stories”.

Opening the day before Christmas last year, Lazarus Brewing has been a labor of love for Christian and his wife Marilyn who moved to Austin from Missoula, Montana with the explicit intent of opening a pints on premise brewpub. He told us, “We moved in November of 2013 and totally underestimated what it would take to open a brewery like this. It took us about 2 years to find a location, another 8 months to get through the design and permitting phase and another four and a half months to build out.” Their patience has paid off as they have created a beautiful, comfortable and inviting space that happens to make some great beer. Christian tells us, “we set out to create different spaces so that someone can spend the whole day here.” Lazarus has everything from a cozy living room-like area to a substantial bar with high backed chairs to long communal tables set next to roll top doors that open to the patio.

Christian has taken a unique path making his way from the software industry to the religious sector to get to the craft beer world. Living in Missoula, Montana Cryder started and became pastor of a small non-denominational church called All Souls and started a non-profit organization that helped provide basic needs for people “who’s community was thin” called Imagine Missoula. Brainstorming of ways to fund his non-profit he came up with a crazy idea that he pitched to Bjorn Nabozney, owner of Big Sky Brewing to brew and release a seasonal beer called All Souls Ale and donate all proceeds to Imagine Missoula. Bjorn agreed and they commenced collaborating annually on a very potent 11% ABV Imperial Saison that went on to almost completely fund operations of the non-profit. Enjoying their collaboration so much, Bjorn urged Christian to start up his own brewery and thus began the journey that culminated late last year with the opening of Lazarus.

At the helm of Lazarus’ 10BBL brew system is Matt Couch, former brewing manager at Victory Brewing in Pennsylvania. Lazarus is quite the departure for Couch who was an instrumental leader at one of the country’s largest breweries helping to guide Victory’s research and development labs, recipe formulation and numerous special projects including the planning of their own experimental hop growing operation. Running the front of house operations is Certified Cicerone Marcus Tenharmsel whom many of you will recognize from his years as GM at Hopfields. Interestingly, Marcus had known Christian since he was 10 years old and was instrumental in helping get things started at Lazarus. He told us, “As Christian was building the business plan for Lazarus I was able to help him with some of his market research and financials. We homebrewed together a couple beers together and I helped brew our first 3 batches while we were still in construction. When we got within about a month of opening it was just full on getting ready focusing on the front of house and the kitchen.”

Post-opening fundraising, crowdfunding and kickstarting are not uncommon in the brewing industry, but Lazarus has put a unique spin on their efforts. In exchange for a cool $1000 contribution Lazarus is offering up “free beer for life” in addition to a fancy, handblown branded goblet to be used while on-site for 250 “Patron Saints.” Before you get your checkbook and pen ready, realize that the fine print of the deal details that “Saints” are entitled to one beverage (beer or coffee) everyday until their death. If you add it up, that really is not a bad deal for someone who lives close to the brewery and can actually be a regular. With the raised funds, they are hoping to build out The Cool Store, the iconic convenience store adjacent to the brewery that they took over as part of their lease. First they are hoping to start roasting their own coffee beans but are eventually hoping to build a dedicated facility for barrel aging and sour program.

Lazarus has had such a busy first few months that they are still in the initial stages of fleshing out their beer portfolio. Marcus told us, “We have been so busy. Consistently keeping up with demand has been our main goal right out of the gate. Ideally we’d like to have 6 or 7 standard beers and fill the rest of our 16 taps with rotators and seasonals as well as a housemade root beer.” On the day of our visit they had 9 beers on tap ranging all over the beer style spectrum. It will be exciting to see how things settle out and to eventually see what kind of rhythm their brewing program falls into. 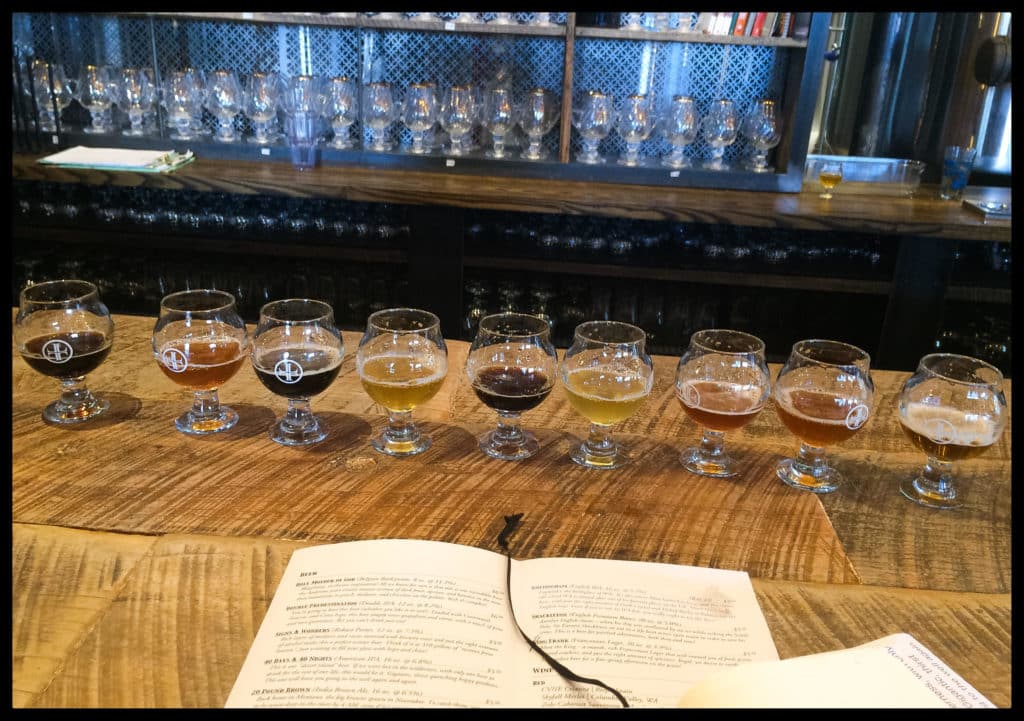 “Nottingham” English IPA: A really nice, old-school, refined version of the classic style highlighted by Phoenix, EKG and First Gold hops. Bready and Biscuity with a nice tea-like quality coming from the hopbill.

“Signs & Wonders” Robust Porter: Great beer to curl up with the 3 or 4 days of Austin’s “winter” with rich, chocolate notes and a hint of sweet molasses on the finish. 7.3% ABV is well hidden. Would be a perfect accompaniment to a nice cigar on the brewpub’s pergula-ed patio.

“Double Predestination” Double IPA: Another hoppy stunner with a hoppier blast of the same citrusy and floral hops as their IPA but with a bigger grain bill showcasing Maris Otter, Pilsner and Crystal malts to keep things balanced. 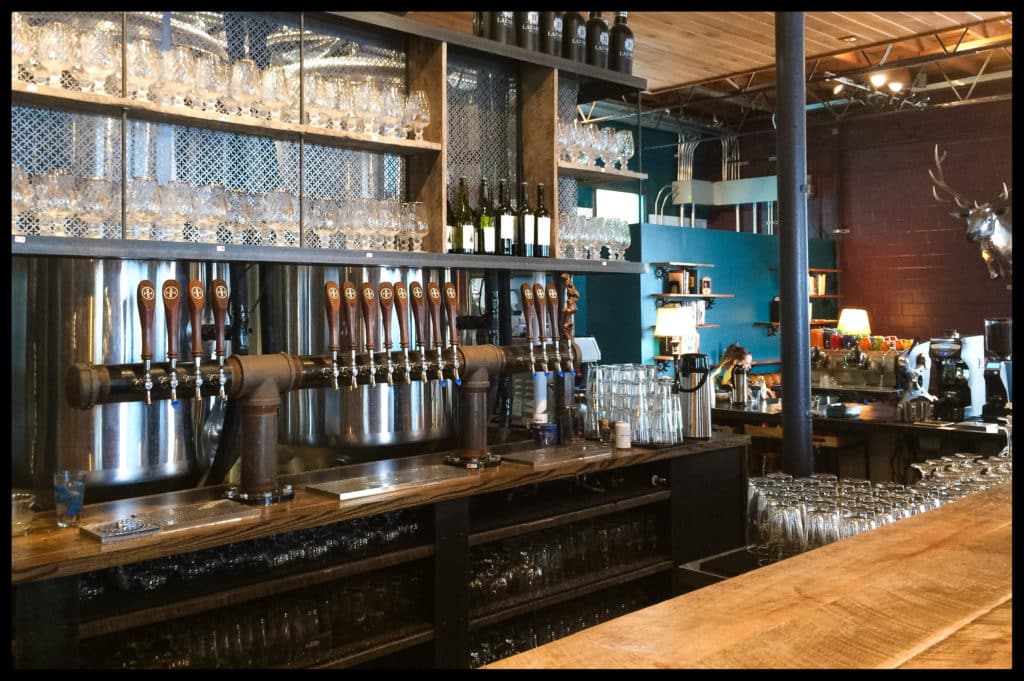 Location: 1902 E 6th St, Austin, TX 78702 (between Whisler’s & Counter Cafe, two doors down from Cuvee Coffee)
Hours: Tues/Wed: 7:30 AM – 10 PM, Thurs/Fri: 7:30 AM – Midnight, Sat: 10 AM – Midnight
Sun: 10 AM – 10 PM – Closed Mondays
Kid Friendly: Always welcome
Dog Friendly: Out front at the communal, picnic tables and on the patio if they are well behaved
Parking: Couple spaces in front, street parking along 6th and their own lot two block away on 4th & Chicon
Food: Authentic street tacos (Breakfast Tacos until 2pm & Dinner menu from 11am- Close) on their own handmade flour tortillas, plus snacks like Fried Chickpeas along with Chips with Pico, Guac as well as Queso & Veggie Fondido options.