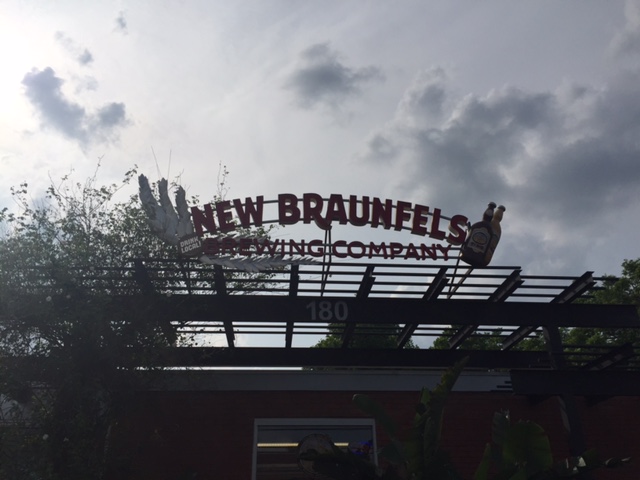 Who makes beer from pickle juice? Seriously! And why do I love it so much? Kelly Meyer is like the mad scientist of the brewing world. His passion is concocting new recipes for beers that are out of the ordinary. He and his wife, Linsey, own and operate the New Braunfels Brewing Company.

When I was invited to taste their brews, the anticipation was killing me, because I had been looking forward to trying their beers for a long time. I support all Texas breweries, but anything south of Austin I consider my home court. This particular brewery has been on my radar for a long time.
I tried everything they had on tap, and the tasting journey went from crisp and clean to roasted and smoky, finishing with some refreshing sours. Now on a personal note, I’m not into sours but the ones Kelly brews were more of an “introduction” to sour beers, none were too mouth puckering harsh. They were just slightly sour but full of taste. There was one, “Le PKL FKR” that for sure has become my favorite of their sour line!

Like his beers, Beer Master Kelly Meyer “Pucker Gangster” is full of personality. He is proud to say the community accepts his recipes, but he has no specific target audience or group he hopes to please. Kelly mostly uses local ingredients in his experimental brews, which he admits at times, he has no idea what the final product will taste like! Many of his experimental batches are only found in his tasting room but some make it into the market as seasonal beers and others are just for fun and only available in the tap room.

Kelly and Linsey began this endeavor in 2011, and although there were ups and downs, they have solidly established their presence. Their dream was to brew with local Texas ingredients, and that’s exactly what they have done.

The beer labels are fun, colorful and alluring, and Kelly’s trademark sense of humor is obvious in some of the beer names such as my favorite called “Le PKL FKR”.

The brewery produces small batches of tasty and unique craft beers primarily produced from wheat; however, there are a few sours. Some of the lineup changes fairly frequently and can only be purchased at the brewery. Their annual production is around 800 barrels from their two 15-barrel fermenters and two 30-barrel Brite tanks. 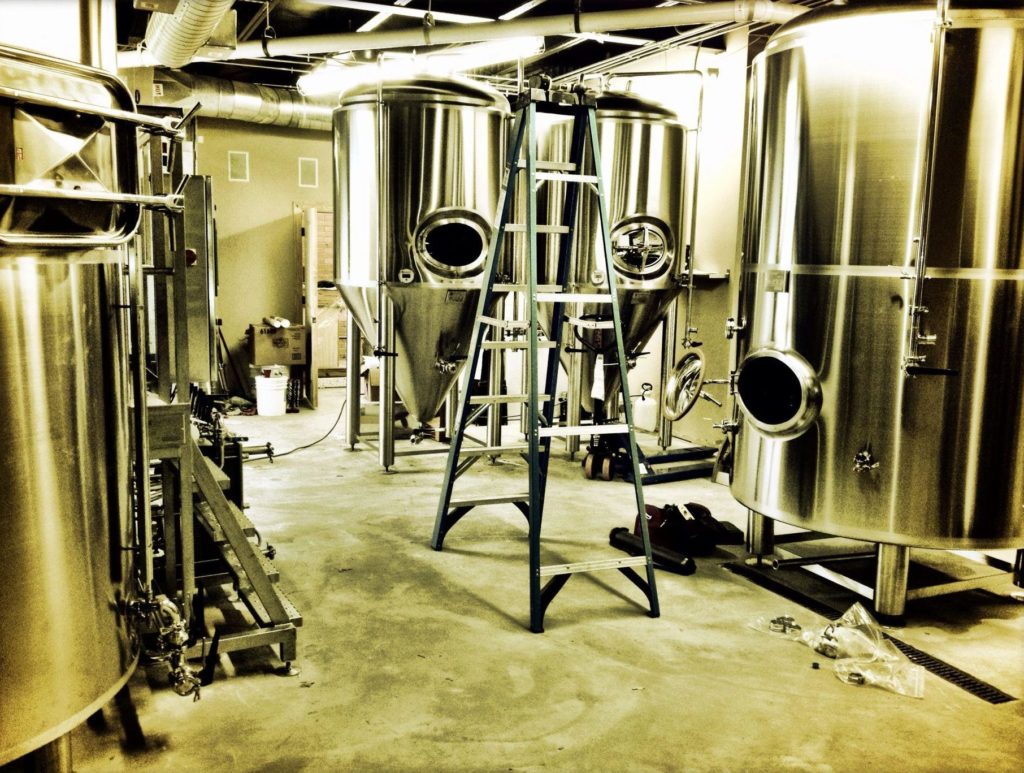 They do a lot of  barrel blending: “We try not to use all of the barrels and then blend old and new barrels together for each beer release”. 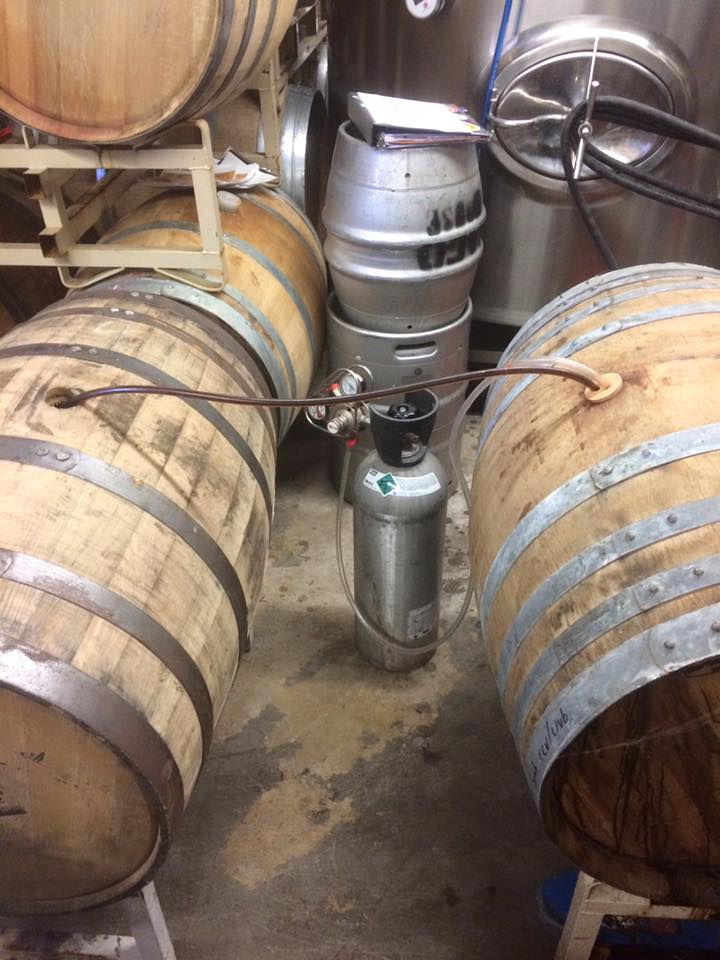 The tap room is small but charming; there are a few bar tables indoors where you can enjoy your beers while in the comfort of air conditioning. The bar area is inviting, and I found myself wanting to hang around that area because of Willie, the bartender. He is so energetic and fun to talk to. The day I visited, Prise was tending the bar, and both of them were very informative and know their beers. The brewery has a staff of six and from what I observed, they seem to have a lot of fun doing their jobs. 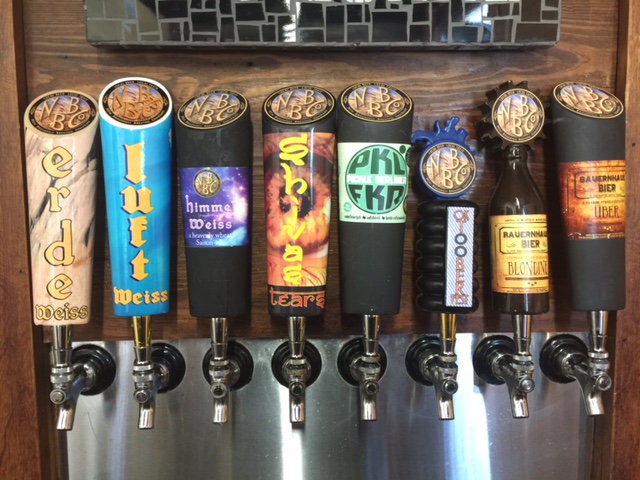 A very unique aspect to NBBCo, is that you can grab a beer to go from the brewery and walk around the historical New Braunfels district as this town allows beer-in-hand/open containers!

Erdeweiss ABV 4.5 IBU 20
Similar in consistency to a Hefeweizen, Erdewiss has a thick brownish foam, dark in color and with soft hints of coffee and caramel to the nose and taste, light, smooth and to me with well-balanced malts that gives it a finish that is not bitter. This is their version of a Weizenbock and an all year around available in this style.

Luftweiss ABV 4.7 IBU 16
This is a very fresh tasting beer with a transparent look for a Hefeweizen, sunkissed golden color brewed with 85% wheat and American citrus hops. I noted cloves and bananas on the nose and light citrus flavors , overall a refreshing drink with a nice cloud of foam on the top. This beer is available all year around.

Himmelweiss ABV 6.5 ABU 27
This delicious beer looked a little bit darker and much denser than their Hefeweizen “Lutweiss”, this one is their vanilla Wheat Saison, a brew that you can expect available all year around, vanilla and spice on the nose and got flavors of banana and hops.

Shivas Tears ABV 8
Dark and dense with a pronounced alcohol character and malted wheat texture, a bonus of earthy notes on the nose and high bubbly carbonation that shows a nice effervescence head; toasty in smell and taste. I read about this kind of beer not too long ago, and there was a distinctive characteristic about this style that to me summed it up perfectly: “dark brown turbid and a head tamed by alcohol strength”
*Editor’s Note from Rich Plakas: This is one of my favorite NBBCo beers!

Oktooberfest ABV 5.3 IBU 27
This is their “lager” but it is not a light lager,” it is full-bodied, rich, toasty, dark copper in color with medium to high alcohol content. I was told this is a seasonal and usually not found during the summer in the tap room but that they had just come across an overlooked keg in their storage so I was lucky to have tried it. This beer is completely made out of Barley and it is in the style of a Marzen Style Lager.

The Blondine; this is their farmhouse approach to a sour Hefeweizen; a sour beer that I can handle because it is mildly sour, a very crisp Hefewizen that doesn’t live your mouth puckering. It is very easy to drink and full of flavor. I found smells of salty minerals, yeast and lemon zest, flavors of lemon zest and subtle banana.

Lu PKL FKR Berlinerweiss with dill pickle juice. This one is so much my favorite! For a person like me who doesn’t favor sours, this one went fast to the top of my list because it is so unique and delicious. I kept looking at my glass as if I was going to see a pickle floating on my beer. It is very light in body, smooth and friendly. It really does taste like a lighter version of pickle juice but not as strong; to me it had the perfect amount of dill and salty which makes it different but super tasty to try!

Uber, German farmhouse style Weizenbock, Lactic sourness on the nose, opaque, dark brown, lots of, coffee and dark fruit with a bit of a sour finish to the taste, smooth and leaves your mouth with a great toasty flavor.

If you are not sure which beers to drink, your best bet is to order a flight and sample their different beers. 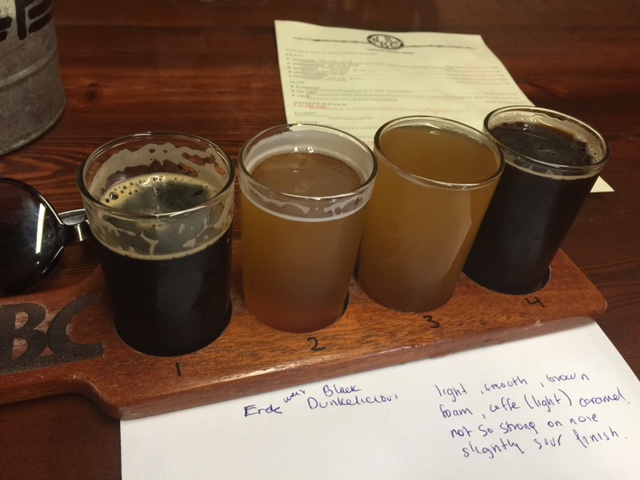 Kelly has a lot of different beers he has released as seasonal or experimental, for precise details and information visit their website at www.nbbrewing.com

Their tasting menu changes constantly, so please visit the website to get a menu of the current selections on tap. You can buy beer by the glass or growler to go: 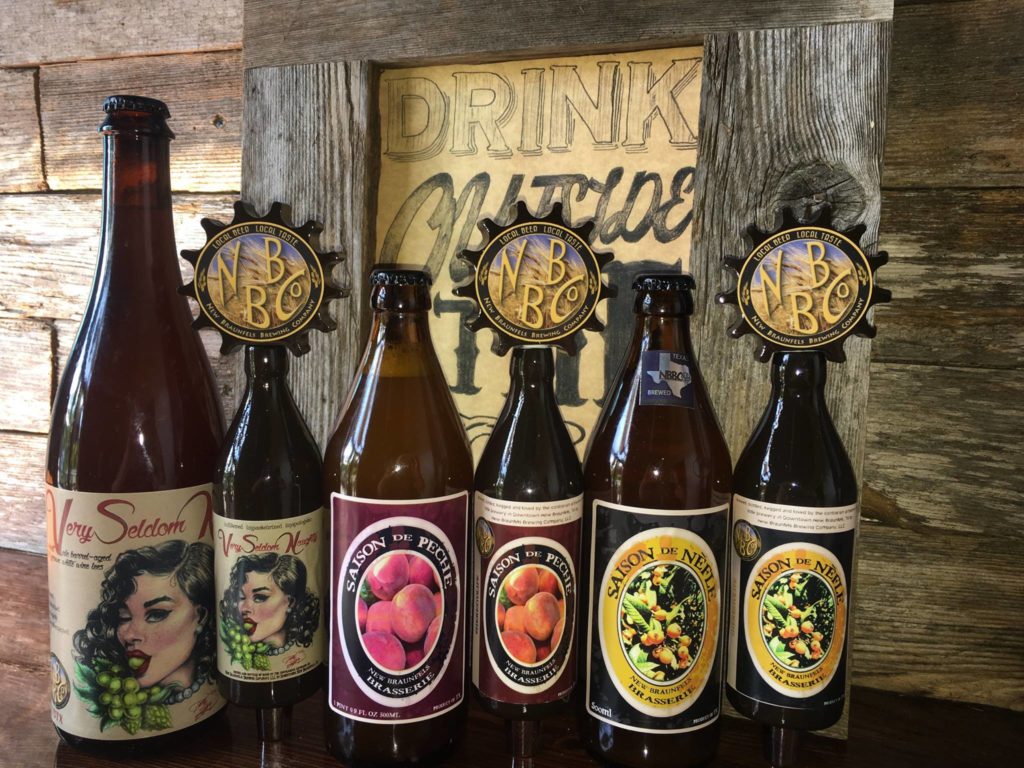