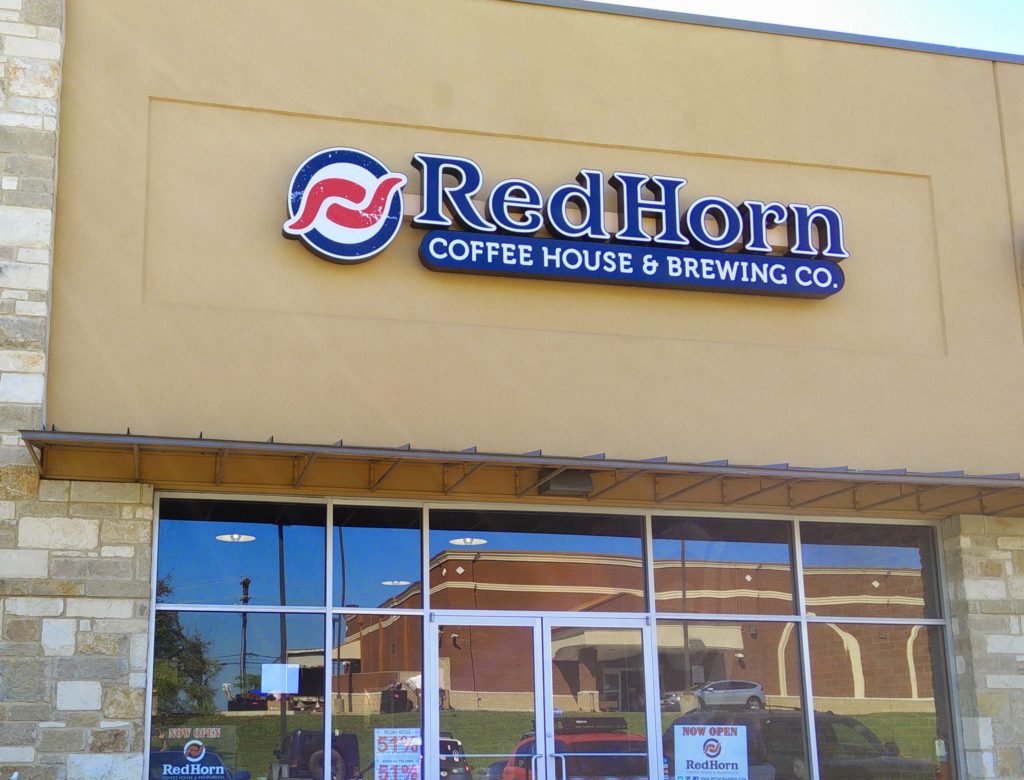 “Do Well, Be Positive, Have Fun“ When that is your mission statement, it is hard not to be successful. That is precisely the case for Red Horn Coffee House & Brewing Co. in Cedar Park as they gear up to celebrate their “Unoversary” this weekend.

As owners Jon Lamb and Chad Misner look back on their first year in business they are pleased to report that they have accomplished everything that they had set out to do and are excited to see what happens during year two. As Jon puts it “it was our intent all along to become a destination” when they opened their doors on March 11, 2015 in a tucked away strip mall behind Goodwill at the corner of 1431 and Parmer.

Friends Jon and Chad hatched the idea for Red Horn during a road trip they took to Destin, FL with both of their families back in 2012. During the 15-hour journey they talked about many different business ideas, but got particularly excited about opening a beer bar and coffeeshop. In the early stages of planning, Jon and Chad were inspired and spurred on by the success of then upstarts Radio Coffee & Beer in South Austin and Wright Bros. Brew & Brew on the Eastside in executing this type of hybrid business model. They wanted to take things a step further than these businesses by roasting their own coffee and brewing their own beer in-house. They put their coffee roaster on a dedicated platform right as you walk in the front door with the brewery tucked back behind the coffee bar. The shiny fermenters are visible from just about anywhere in the building adding to the rustic “urban-industrial” aesthetic of the 4300 square foot place with its abundant exposed brick and reclaimed wood.

Lamb and Misner set out with the idea of designing Red Horn to be a part of the community it is apart of, helping to support other local businesses, rather than exclusively selling their own products.

They have a 32-tap beer wall that allows them the ability to sell other breweries’ beers alongside their own. 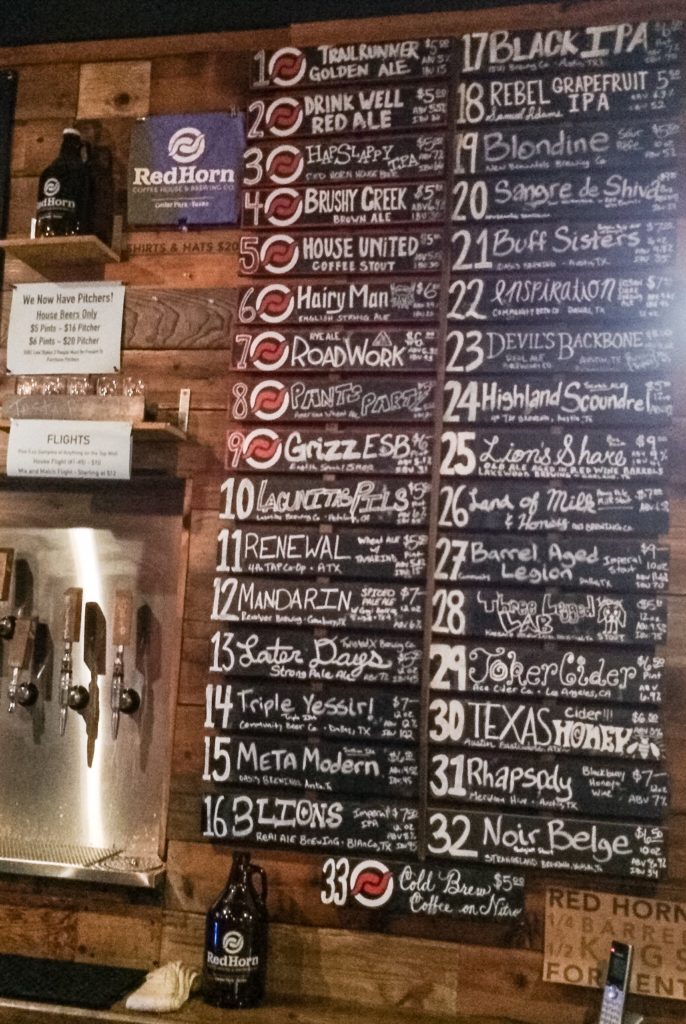 On the day of my visit, they had 9 house brewed beers of their own pouring with all but 3 of the remaining taps showcasing beers from other Texas breweries. This mentality is mirrored in the recently installed bottle fridge that arrived on the floor in January which included some exceptional beers; 9 of 13 being Texan brewed. Jon says, “We didn’t go into this with the idea that our beers are the best that are out there. We wanted to be able to offer other local beers to help support our community and at the same time giving a wider selection of styles to help educate our customers about what else is out there. By doing so, we sacrifice the ability to self distribute our own beer, but we are really glad we made that decision.” Interestingly enough, this ethos is mirrored on the coffee side of the business as well as they not only serve their own house roasted beans, but also brew coffee with beans from Round Rock’s Wild Gift Roasting Co. 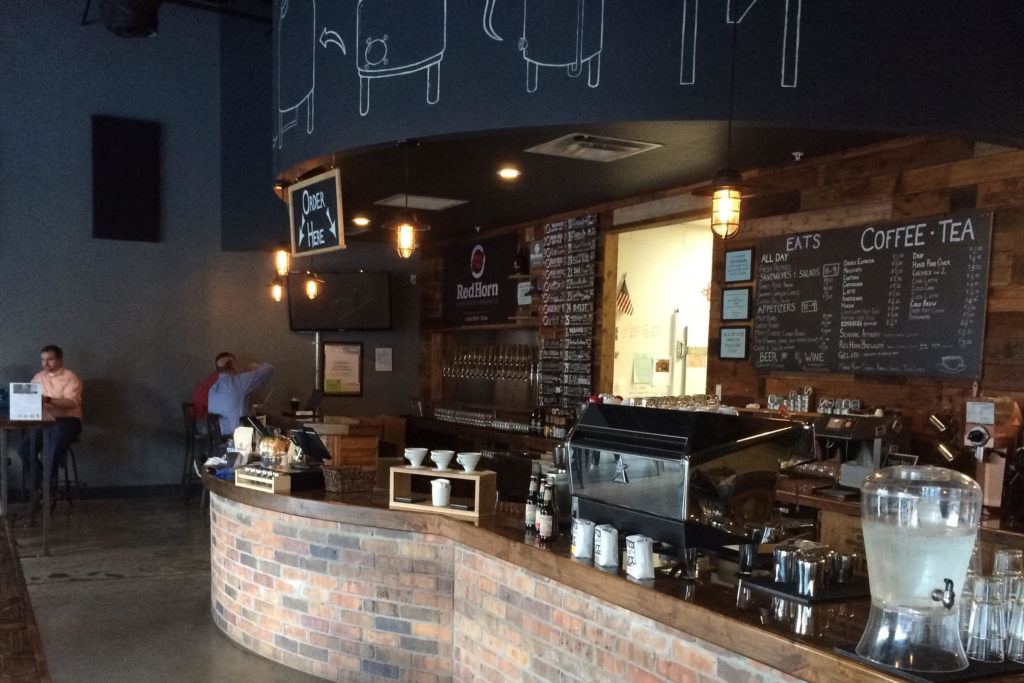 At the helm of Red Horn’s beer program is homebrewer turned pro Zack Gardner. I have had the pleasure of meeting many passionate Brewers over the years, yet I cannot recall one who was as outwardly enthusiastic and eager to talk about his craft as Zack was when we met. Zack had worked with Jon building houses in the area and they had become friendly over many discussions about beer. While Jon dabbled in homebrew, Zack was hooked and typically brewed 20 gallons a week. Not being able to drink all of that beer he generously offered his homebrew to many of his coworkers seeking their feedback and critique in return. As Red Horn began its quest for a Brewer, Jon reached out to Zack via Facebook and they had found their man. In addition to brewing, Zack also acts as the shop’s beer buyer, moderating the draft and bottle selections ensuring there is always an abundance of styles to suit every taste.

Zack brews on a brand new (year old at this point) 7 BBL system with all of his stainless coming from Stout Tanks & Kettles in Portland, OR and a fancy semi-automated pump, electrical and glycol control panel engineered by Brewmation out of New York State. It is a beautifully designed little brewery that allowed Zack and his assistant Brewer Reno to brew a respectable 250 BBL last year with goals to at least triple that quantity this coming year! Zack performs a very delicate balancing act in fulfilling demand for his own bar at Red Horn while sustaining an adequate supply of kegs for area draft accounts supported by their distributor Austin Specialty, who also distributes for Strange Land, Oasis, 4th Tap, Argus Cider and Community among a handful of other smaller Texas breweries. In the coming months and years Zack and the Red Horn team are looking to expand capacity to widen their distribution footprint, keep up with increasing sales out of their own bar and to eventually start canning their beer. In the nearer future, anticipate some brewery-only bottle releases as Zack is currently developing a sour, barrel-aged program. 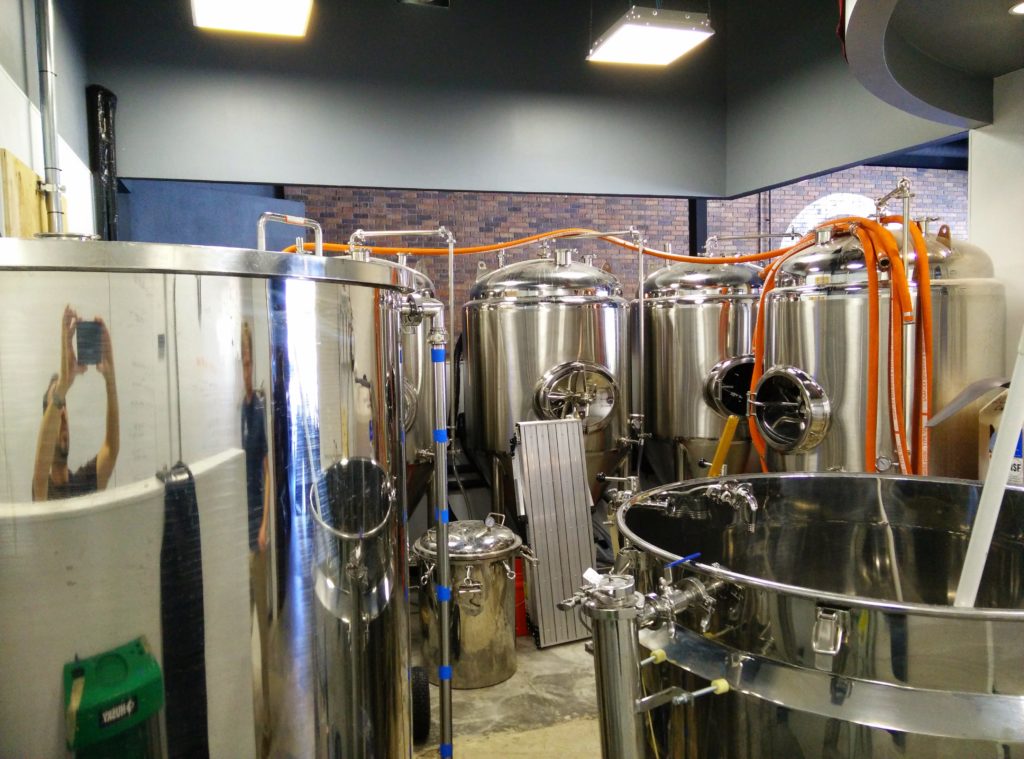 Do yourself a favor and order up a Brewlatto; a 4oz pour of this stout alongside a double shot of in-house espresso and a small scoop of Gelato from Teo Gelato in Austin. It comes on a specially made tasting board and creates a “Choose Your Own Adventure” experience in how you decide to mix and match this trio of deliciousness. My preference is to first sweeten the espresso with a spoonful of gelato before building a beer float by pouring some of the stout over the remaining gelato, leaving a little of the stout to drink straight up. This whimsical concoction is worth the effort to drive up from Austin, even if it is the only thing you order. 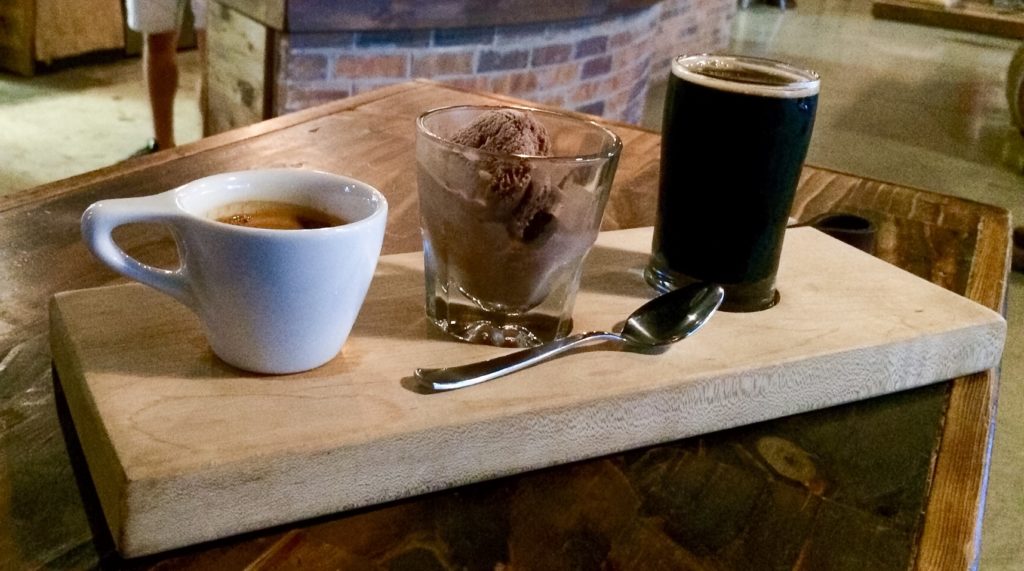 Hairy Man English Strong – Originally designed to be a wee heavy, that got a “wee bit” strong during fermentation. Big smooth and roasty malts with slight pear and banana esters as a result of the cold fermentation with a robust English yeast strain.

Road Work Red Rye – Commemorating the seemingly endless construction out front of Red Horn on 1431. This robust red showcases one of Zack’s favorite combinations; the one-two punch of Rye grain and Chinook hops. You get a lot of spice from the rye with a nice earthy, citrus hop flavor balanced out by the biscuity Caramel malts.

Grizz ESB – Great take on the traditional English pub ale. Malt forward and sessionable with a unique fruity hop flavor from the use of Pilgrim hops.

Pants Party Wheat – Another easy drinker on a hot, Texas winter day! The use of a 50/50 blend of wheat and barley malts give this beer a nice creamy body with crisp, refreshing citrus and grassy flavors.

Dog Friendly: On the Patio

Parking: Plentiful in private lot in front of brewery.

This weekend March 11-12th, Zack and the Red Horn team are pulling out all of the stops in celebration of their “Unoversary“.

Friday, March 11th 3pm they will be tapping the much anticipated Unoversary SMaSH (Single Malt & Single Hop) Ale showcasing two of Zack’s favorite ingredients; German Pilsner Malt and Azacca hops. I was offered a little preview sip and it was delicious with a bright tropical mango and pineapple filled nose and plenty of citrusy grapefruit flavor playing off the clean and fluffy malt body.

Saturday, March 12th at noon they will be tapping their You Be Forty Belgian Red Ale that has been aged on Red Wine Barrels in addition to numerous variants of their Suburban Ninja Imperial Stout including one flavored with Chocolate Mint and another with Orange Peel and Habanero in addition to various Whiskey and Wine Barrel-aged varieties.

They will also have limited edition Unoversary merchandise available both days with live music Friday night at 8pm and all day on Saturday from 10am – 10:30pm.