The TABC is definitely not one of the most popular government agencies among beer fans in Texas. While their laws can be quite restrictive against beer in general (but for some reason, much looser for things like distilleries and wineries), it does provide us with some interesting data. Thanks to the system in place, I can access all of the label approvals over the last decade.

This is an updated article from one that I wrote last year to reflect changes that have happened over the last year.

Now, this started more out of curiosity, but I found the trends interesting. Before I start going into all of the charts, I should explain a little about label approvals and how they work. In Texas, every beer that is sold on the shelves require a TABC approval for that label. This includes bottles, cans, and kegs. Saying that 300 label approvals came through does not mean that 300 new beers are now available, it just means that 300 new requests were approved by the TABC. Basically, a label approval can consist of one size of container (let’s say a 12 oz can) or it can include multiple formats of that product (a keg size, a can, and a bottle all on one). So, this just shows some random insight into how labels are coming into Texas. (If you are curious about what labels are approved in Texas, I do a weekly article that you can see here: https://craftbeeraustin.com/category/tabc-updates/)

Another misconception with label approvals is that every beer in Texas must have it to be sold at a brewery. This is not quite true. If a brewery has a brewpub license, they do not have to have label approvals for the beer they sell onsite(including bottles to go). Jester King, for example, has a brewpub license. All of their beers do not get label approvals at the beginning. Seeing how they do a majority of their sales on site, they do not need to get them unless that bottle is going into distribution. Once a bottle leaves the site for any reason to be sold, it must have label approval. Places with brewpub licenses, like Pinthouse Pizza and NXNW, never needed to get label approval until they were going to distribute(Brewpubs has been able to distribute in Texas since only since 2013). For more insight into the brewpub vs. brewery dynamics in Texas, you can look here: https://craftbeeraustin.com/brewpubs-versus-breweries-a-basic-look-at-the-laws-in-texas.

I ended up going through every full year of data that was available (17,754 total approvals) for me to compile all of this into an Excel document. I probably should have better things to do with my time, but I was bored one day and got it done. All of the data is for 2006 to 2016. I could have gone back to mid-2005, but using half a year’s worth of data would have just screwed up the charts. One other word of caution, I am listing approvals as they show up on the TABC database. One approval may include two approvals in it, but only shows up as one entity on their search.

We will start with the total number of approvals each year broken into total approvals, macro approvals, “craft” approvals, and Texas brewery approvals. I should note that for macro, I generally took out anything that is considered a regular macro beer. Approvals for things like Bud, Coors, Miller, Seagram’s (alco-pop drinks show up in these, so I included them in macro), and major Euro breweries like Heineken, etc. The craft section is for anything that was not macro and not an alco-pop. This includes all of the Texas breweries in it. I also included AB-InBev brands like Elysian and Goose Island in the craft section. The basic way I differentiated them was that if they were brewed at an AB-InBev facility, they went to macro. If they were brewed at Goose Island’s actual brewery, they went to craft. It was a much easier way to draw a line. As far as the Texas breweries, it is anything made in Texas that was not macro. This means Shiner is included in that number but not Pabst’s plant in DFW. 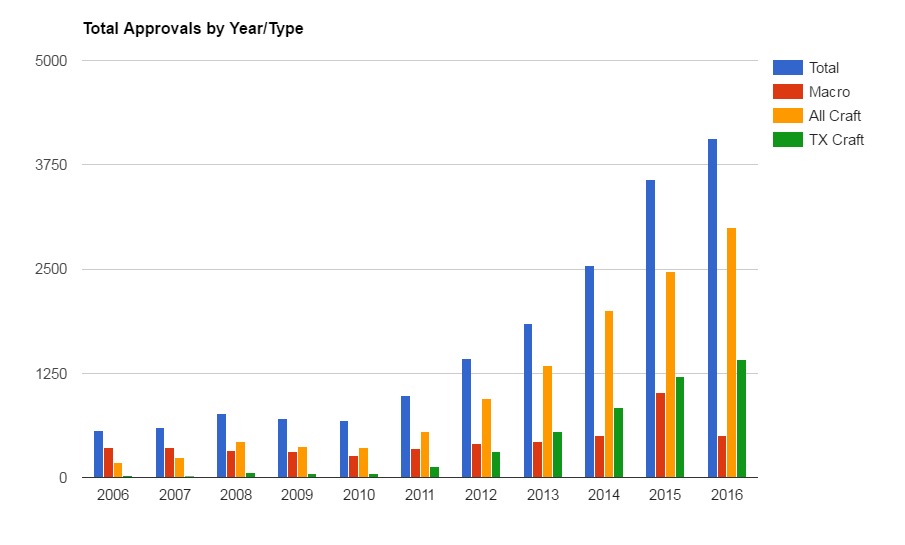 Then you take a look at the macro label approvals. There has been a major drop off in the macro approvals this year. It is to a point that Texas craft approvals more than double the number of macro approvals. That is a big shift from last year when they were basically equal. I was under the assumption last year that we would continue to see macro grow to try to have more label variants on the shelf, but that did not even happen. Even A-B owned craft brands (like Goose Island, Elysian, Breckenridge, Four Peaks, etc) had less than 100 approvals over the last year together.

On to Texas label approvals. We have obviously seen a substantial growth of Texas breweries over the last 5 years. The label approvals continue to show this as well. The growth was not quite as dramatic as 2014-15, but still a good jump. 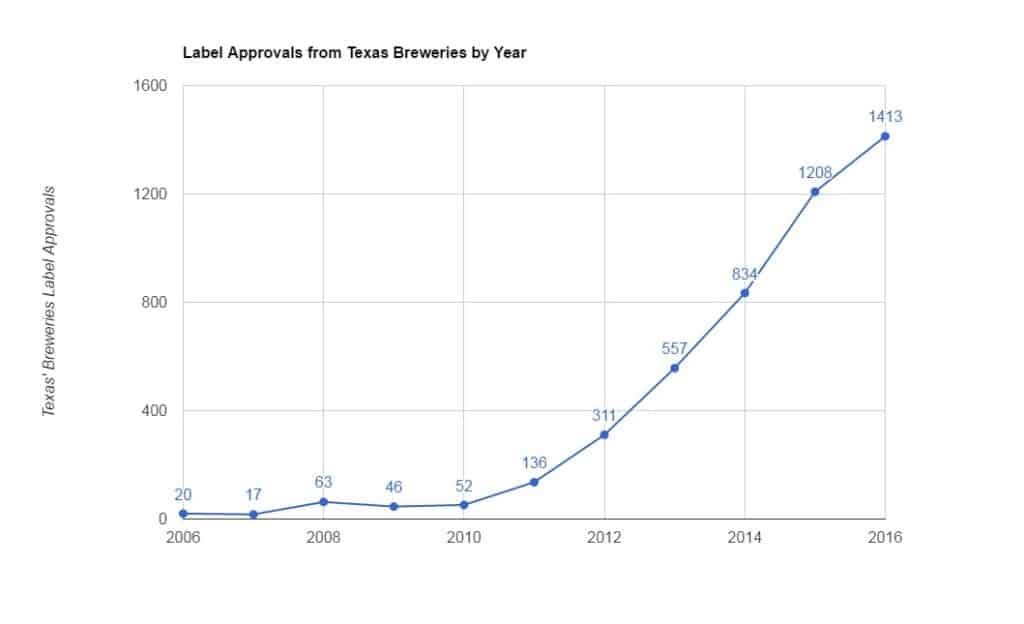 Now, a look into the individual breweries across all categories that are submitting labels. This chart likely will not change much from last year’s. 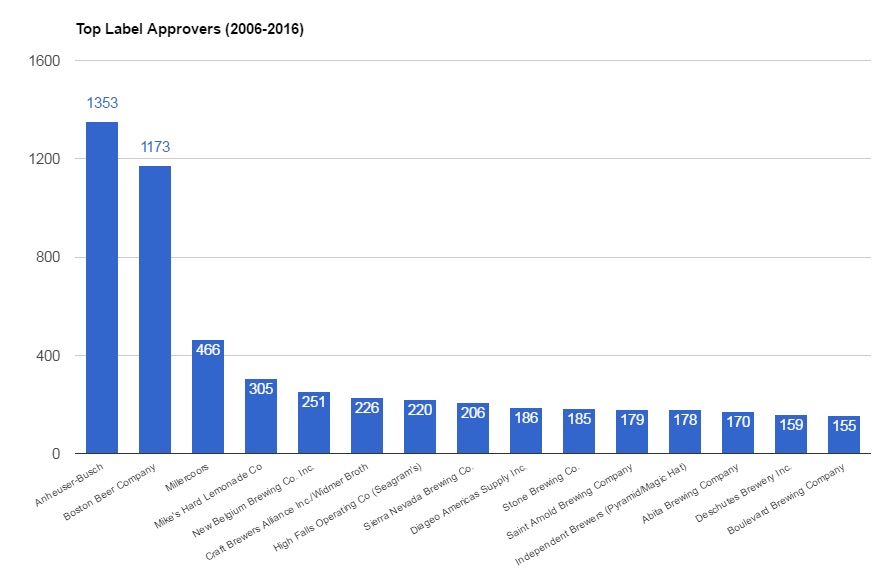 It comes as no real surprise who a lot of the top ones are. Basically, any place that makes a bunch of beer for a bunch of different breweries tends to be up there. Boston Beer (basically Samuel Adams, Twisted Tea, etc) is on there due to how many brands they have started making over the last couple of years. Also, most places on this list are places that have distributed to Texas for all of the 10+ years that the data covers. One thing to note, Boston Beer Company has gained substantially on Anheuser-Busch over the last couple of years…as you will see below.

Notice a surge from Boston Beer Company there? That is mainly due to them getting over 600 approvals in the last year. This would be roughly 12 approvals for every week that I put out label approvals (but they are not listed on there). There is a simple reason – they flooded the system with numerous Twisted Tea type approvals with basically the same label except for someone’s picture on there that was different. Each one of those needed a separate approval. On the weekly approvals, I basically ignored them because it was not something worth including every week. Then you notice Anheuser-Busch’s substantial drop. I cannot say what caused that other than they just stopped sending in as many approvals. I am not complaining, but A-B is definitely not the reason the label approvals process takes so long these days.

As far as the Texas breweries go, here are the top breweries getting approvals over the last 11 years. 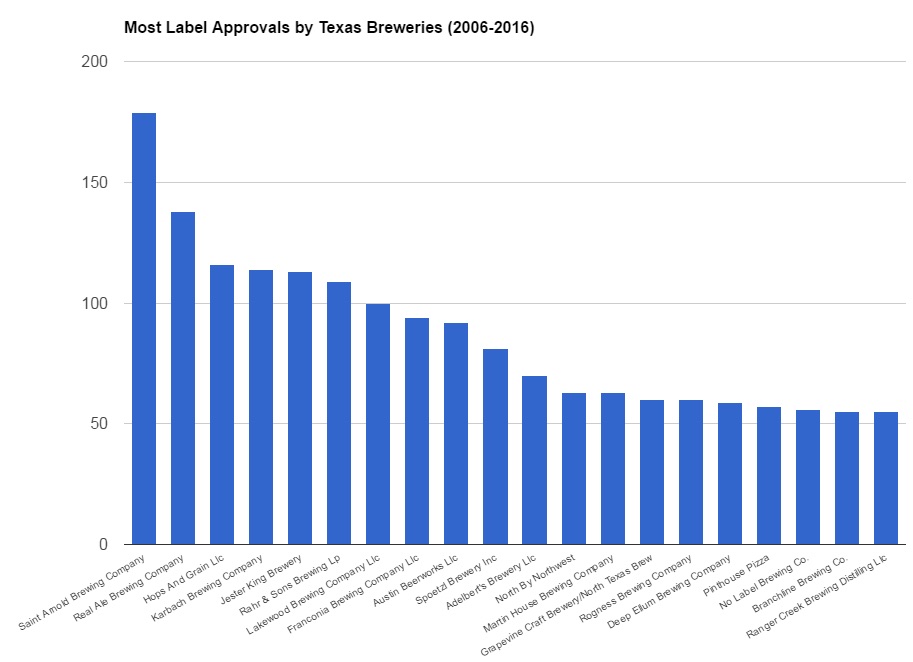 On this chart, it is not necessarily the breweries that have been open the longest with the most amount of approvals. Jester King, Hops and Grain, and Karbach have both only been getting approvals since 2011 (well, minus 2 for Jester King in 2010). Spoetzl (aka Shiner) has been around the longest and is not near the top on this list, but they also do not put out many new beers until recently. For what it’s worth, 181 Texas breweries have received label approvals from 2006 to 2016.

For the last year? 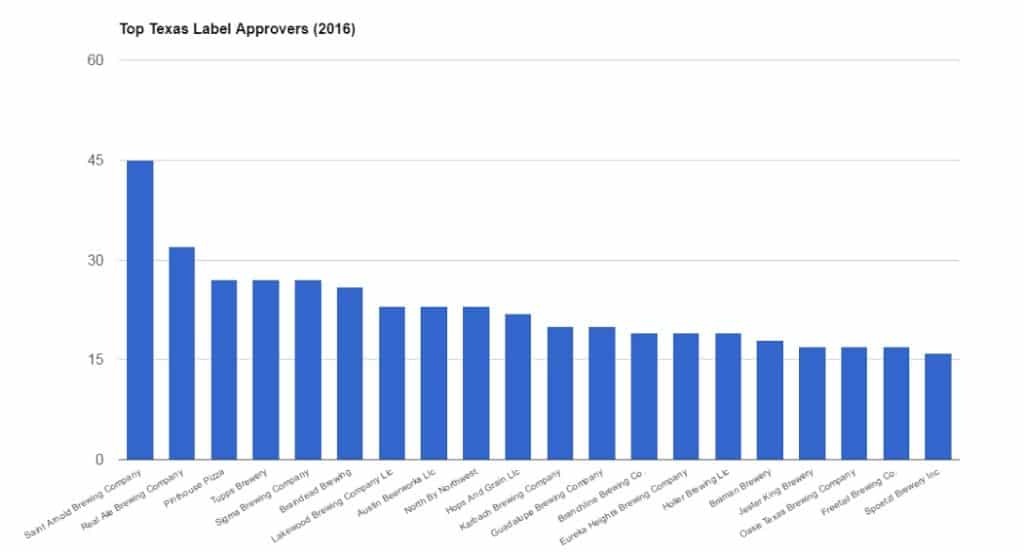 If you include all of the macro and craft breweries in this, here are the top approvers for 2016: 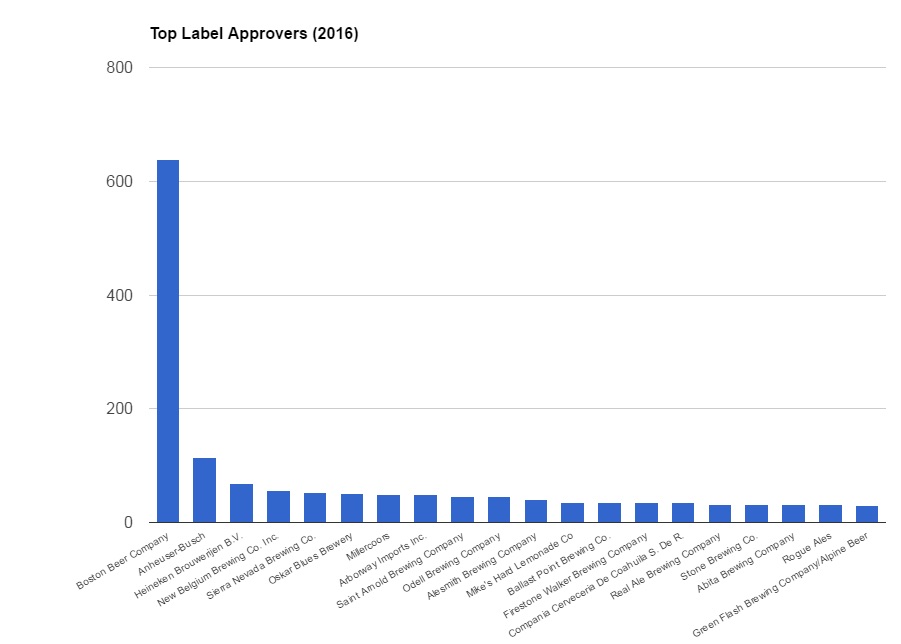 Interesting to note that only two of the top 20 actually came from Texas breweries (well, 3, but I did not include Oskar Blues as Texas this year solely due to them not being open until summer and a lot of the approvals came from CO and NC).

Onto a section that I did not include last year. This is a breakdown of what exactly is getting approved into Texas by format. I should note, though, this is ONLY for the craft categories. The way I compiled this data is basically anything that I have been putting on my weekly TABC approvals articles are on this.

I think this is a trend that we will see throughout the craft beer industry over the next couple of years – the switch to cans. The number of can approvals almost doubled over the last year while the number of bottle approvals stayed stagnant. Kegs will always lead on approvals solely due to pretty much every beer is going to come in kegs as well.

To break those approvals down even further, I broke the size of those formats down:

This further illustrates the point about cans. There was only a slight increase in 12oz bottle approvals, an actual decrease in bombers approved, while 12oz cans saw a major increase.

Beer is not the only industry that has to go through a label approval process. Wine and liquor also have to go through the same sort of approvals, but often times it involves different requirements. Still, I figured it would be interesting to see the number of approvals by industry.

Wine takes up a majority of all approvals going through the TABC: 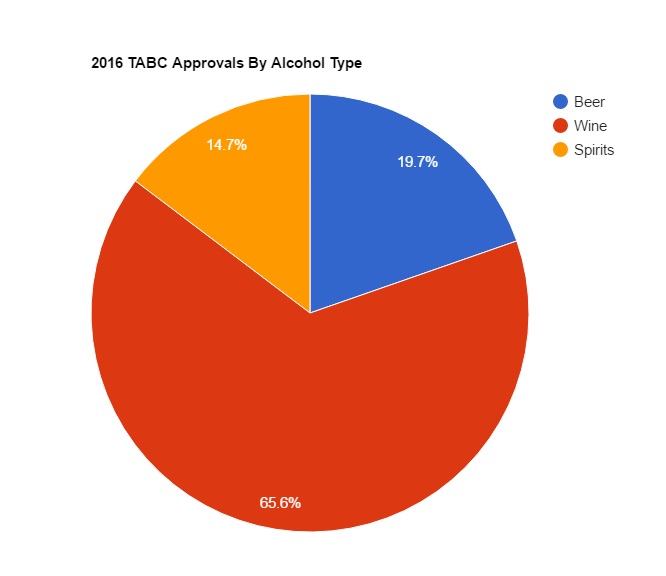 To also put this in perspective, the average lead time as it currently stands (from the TABC’s website) to receive label approvals for each category is:

As previously stated, they look for different things in beer versus wine vs. spirits.

Why is that exactly again?

Why should beer have to have different tests that force the lead time to 40 days versus wine (which is submitting over 3x the number of approvals) and their lead time is 1/4th of that of beer?