This summer, Beer Camp is hitting the road on an eight-city festival tour, and every craft brewer in America is invited to join. Sponsored by the local craft brewers’ guilds in each city, festivals feature live music, street artists, food trucks and hundreds of beers for tasting including pours of the Beer Camp Across the World Collaboration. 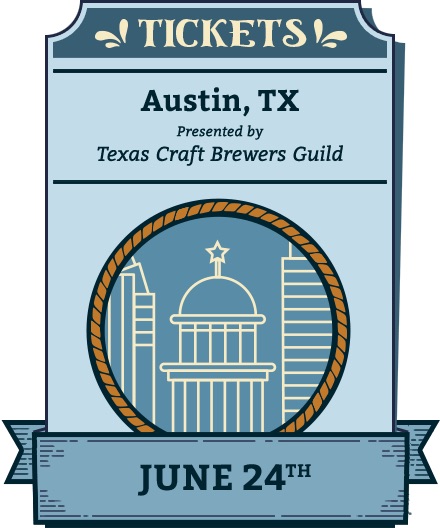 Across the World Collaboration 12-pack: Beer Camp Across the World is an evolution of the concept started by Sierra Nevada in 2013 to celebrate the spirit of craft and independence through collaborations with like-minded brewers.

This year, 12 breweries representing unique geographies and brewing styles were tapped to participate in a one-time collaboration pack that includes the following (see tasting notes below).

• Hoppy Belgian-Style Golden, a hop-forward rendition of the golden ale style that is classically Duvel from Puurs, Belgium.

• Ginger Lager is a bright, crisp flavor bomb made with the good folks at Surly Brewing Co., Minneapolis, Minnesota.

• Raspberry Sundae boasts raspberry, cocoa and vanilla in an ultra-complex beer from The Bruery in Placentia, California.

• Thai-Style Iced Tea is a nod to our globetrotting friends from Mikkeller Brewery in Copenhagen, Denmark.

• West Coast-Style DIPA is an intense Double IPA created with the hopheads at Boneyard Beer of Bend, Oregon.

• White IPA with Yuzu is a hopped-up White Ale with bright tartness from our friends at Kiuchi Brewery in Naka-shi, Ibaraki, Japan.

Founded in 1980, Sierra Nevada Brewing Co. is one of America’s premier craft breweries, highly regarded for using only the finest quality ingredients. The pioneering spirit that launched Sierra Nevada now spans both coasts with breweries in Chico, California and Mills River, North Carolina. Sierra Nevada has set the standard for craft brewers worldwide with innovations in the brewhouse as well as advances in sustainability. It is famous for its extensive line of beers including Pale Ale, Sidecar®, Torpedo®, Tropical Torpedo®, Hop Hunter® IPA, Nooner® Pilsner, Otra Vez™, Kellerweis®, Porter, Stout and a host of seasonal, specialty and limited release beers.

Avery Brewing Co. – Dry-Hopped Barleywine-Style: Colorado’s Avery Brewing Co. and Sierra Nevada both make American-style barleywine ales verging on the hop extreme. For this collaboration—dubbed “Big Hog” as an homage to the two beers that inspired it— we recreated both barleywine recipes and then blended the beers into a new hop-heavy creation. It features rich, bittersweet malt character with notes of caramel and toffee balanced against a massive wall of hop flavor and is bottle conditioned for longevity.

Ayinger Privatbrauerei – Dunkle Weisse Bavaria’s Ayinger are legends in the brewing industry, known for their love and perfection of classic German beer styles. Playing off their background, we came together to create this dark twist on the Bavarian-style wheat beer. This beer features layers of wheat malt flavor and was handled through traditional open fermenters to highlight Ayinger’s famous hefeweizen yeast character.

Boneyard – West Coast DIPA “We just love brewing hoppy beers” is the way Oregon’s IPA masters at Boneyard Beer kicked off our collaboration talks. Well, as it turns out we do, too, so we went all out on this intensely hop-heavy West Coast Double IPA. It’s bright golden, crisp and brimming with intense citrus and herbal hop flavor, just how we like ‘em.

Duvel Moortgat – Hoppy Belgian-Style Golden Ale Belgium’s Duvel are the masters of the golden ale—a beer style they helped create—so it was a natural fit for our breweries to combine that style with Sierra Nevada’s hop-forward fanaticism. The resulting beer is bright golden and brimming with hop flavor, with a pop of bright lemon, and perfectly accented by the fruity and complex character of Duvel’s signature yeast.

Fuller’s Brewery – Atlantic Vintage Ale Fuller’s brewery in London has been producing some of the UK’s finest ales since the mid-19th century. Together we created a new recipe for an Atlantic Vintage Ale—a robust beer, perfect for aging, and brewed with plums for a touch of rich fruit flavor that both mimics and enhances the natural yeast-driven aromas.

Garage Project – Campout Porter In honor of Beer Camp, our friends at New Zealand’s Garage Project brewery wanted to carry the camping theme straight through to the flavor of our beer. Featuring a unique malt smoked over Manuka wood, rare Manuka honey and vanilla beans, this robust porter has sweet notes reminiscent of marshmallows toasted over a campfire.

Kiuchi Brewery – White IPA with Yuzu Japan’s Kiuchi Brewery, makers of the Hitachino Nest beers, have an elegant take on classic beer styles with a uniquely Japanese influence. They suggested adding yuzu—an Asian citrus fruit—to a hazy white IPA and we jumped at the chance. What emerged is a hoppy yet refined version of the style with a bright citrus flavor and a spicy finish.

Mikkeller Brewery– Thai-style Iced Tea Denmark’s Mikkeller brewery is famous for pushing the boundaries of beer, so when we decided to partner we knew the result would be a wild ride. This beer was inspired by flavors of a classic Thai iced tea. It’s sweet and rich, with warming spice notes and delicate fruit flavors that maintain a drinkability from the use of black tea in the finish.

Saint Arnold – Dry-Hopped Berliner Weisse Texas’ Saint Arnold Brewery takes a broad view of beer styles, mastering everything from traditional German-inspired recipes to big experimental creations. Together, we teamed up to brew this dry-hopped Berliner Weisse. Featuring a fruit-forward hop character backed up by a snap of mild tartness, it boasts a flavor that’s complex, compelling and very drinkable.

Surly Brewing Co. – Ginger Lager The abrasive attitude of Minnesota’s Surly Brewing Co. brings an aggressive yet refined approach to creating recipes. We came together to create this easy-drinking but complex ginger-infused lager. It’s brewed with hot ginger and a pinch of cayenne to spice up the heat and then dry hopped with an inclusion of oak for a touch of woody vanilla to round out the flavor.

The Bruery – Raspberry Sundae Ale The Bruery in Orange County is famous for its experimental, Belgian-style and barrel-aged beers, and this release fits nicely in their wheelhouse. Inspired by the flavors of an ice cream sundae, this rich blonde ale features notes of chocolate, vanilla and raspberry, with lactose added for extra creaminess. Now you can have your dessert and drink it, too.

Tree House – East Meets West IPA In just a few short years, Tree House has made a big impact on the beer scene with their approach to the IPA—low bitterness, intense juicy hop flavor and unfiltered haze. As fellow lovers of the IPA, we combined our styles—the classic American IPA malt body and the New England approach to hopping—resulting in lightly bitter, unfiltered beer with huge hop flavor.