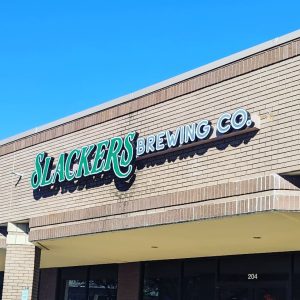 Who is Slackers Brewing?

The husband and wife team of Derek and Haley Law steered the ship to take Slackers from an idea to a reality. They brought on Austin-veteran brewer, Brendan Burke joining the team as their General Manager. Burke previously worked with Strangeland Brewing and most recently 512 Brewing. The three of them have a great rapport and hope to provide a unique atmosphere! The Laws have two boys and are very aware of the struggles young families face in finding a space that can be mutually fun and relaxing for the grown-ups as well as the kiddos. Their children were considered throughout the creation process and they hope patrons agree they’ve created a space full of good vibes! 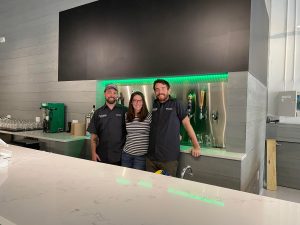 Derek is a software engineer who originally hails from Toronto, has lived in Tennessee, Ohio, California, Europe, and now calls Texas home. He has had a dream of opening a bar with live music for a long time. “I wanted to create an environment where local artists played and people socialized. I have always loved those two things,” he notes. “Once I moved to Texas, I started homebrewing in about 2010…2011, and then it just changed. It’s like, ‘Oh, well, I can still have live music, I can have a bar, AND I can have a brewery. Let’s do it all!” he declares. The couple’s mindset shifted slightly after starting a family. Derek says, “Now we have a family events center like a venue that everybody can come to.” Pointing out that the space is family-friendly in regards to, yes, you’re allowed to bring your kids but moreover, it’s a “place that your kids actually want to be at. The kids are enjoying themselves and you can relax. Whether you drink beer cider, wine, non-alcoholic, coffee…there’s a little bit of everything here,” he adds.

Haley, a yoga instructor, is excited to eventually add in free Sunday morning yoga for the community. It’ll be relaxing and approachable and not too advanced. Seriously, positive and inclusive vibes, folks!

What’s behind the name?

The name Slackers has been on Derek’s radar since the idea took root in his brain. It was further cemented as his love for rock climbing blossomed over the years. He and buddies would climb for 6+ hours and instead of just resting, they’d drink beer and slackline. That “work hard then slack…earn the time that you get to chill” mentality spoke to him. Their goal is to provide a space where you can pop in over coffee, maybe get some remote work done, then enjoy that well-earned beer and stay for the music! “Never leave!” Derek jokes.

What to expect as they get up and running?

They really strive to provide an option to everyone that walks through their doors. Derek notes, “We’re really trying to approach this neighborhood with approachability.”  Whether you like sours, wine, coffee, ciders, IPAs, or even non-alcoholic options, they have your back. They even added Brew Dog’s Non-Alcoholic beers, which is thinking super all-inclusive! The Slackers team knew that local coffee was also important to have on nitro as they enjoy it immensely themselves. They chose their local favorite, Jaded Bear Coffee, claiming it’s hard to drink any other coffee once you’ve tried it.

The first Slackers-brewed beers they plan on sharing with us include their Black is Beautiful Stout, a ghost-pepper porter, and a winter-inspired IPA. In-house sodas with natural syrups are also on their future radar. 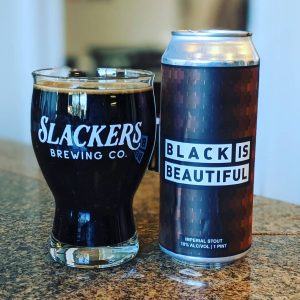 While Slackers will have a few bar bites to start out with, if you come hungry, you hit a walkable parking lot jackpot! Interstellar BBQ who was just voted 2021’s 2nd Best BBQ in Texas (out of 50) by Texas Monthly is mere feet away. Within the complex space, you can also grab options from OneTaco Taqueria, Michelle’s Patisserie, Anjappar Indian Cuisine, and Bar, and Charm Chicken & Karaoke. This shopping center is really being cultivated into a special destination!

Slackers Brewing opened on Thursday as a special welcome and thank you event for their exclusive mug club members. This supportive group donated to the initial Crowdfund in the beginning growth phases, receive a personalized glass stein to stay at the brewery and be ready to pour a free beer into every time they pop in. This idea came from Derek’s trips visiting German monasteries that had stein lockers for members. The list to join could span for generations, meaning you could join the list, but wouldn’t get a spot until your great-grandkids were of age.

The team talks constantly about how amazing the Austin beer community has been in supporting and lifting them up through their journey. Cheerleading skills from nearby spots like The Brewtique and Hedgehog Brewing are just a few they send gratitude to. The brewhouse equipment is second-hand, yet still brilliantly pristine from their buddies at Frontyard Brewing. Owner of Frontyard, Kevin Jones happened to run into Derek at Pinthouse Round Rock several years ago while Derek was wearing a Frontyard t-shirt he’d won in a homebrew competition. The serendipitous nature of the meeting was exciting and yet another relationship of mutual support was born. Frontyard grew quickly and was able to pass along their gently used equipment. Gratitude and good vibes truly flow through this space.

Being family-friendly was extremely important to the Laws as they planned out their dream space. Having two kids themselves they understand the frustrations of a distracted kiddo in an adult atmosphere. Haley elaborates, “We’re bringing this to a community. This is a neighborhood. This is my neighborhood. What do I want? And what do I think other moms who want to go to the brewery want?” From the enclosed padded children’s nook with cubbies to the darkened, quiet mother’s room, they have created options for all their patrons, big and small. Both restrooms have a child changing table, and the mother’s room, Haley’s favorite detail, provides a private space with twinkly lights and a rocking chair for nursing, or just a low-key space for overstimulated kids that may just need to step away. The taproom will also have interactive sensory stations for adults and kiddos. Think puzzles for the tables with items like sand zen gardens, coffee beans, grains, and other beer ingredients.

When it comes to indoor entertainment, Burke says, “We have a projector, but there are no TVs in here, which is deliberate… we want everyone to communicate with each other and be human.” The projector is in place to watch games that bring Austinites together…like UT and Austin FC games. They want to create a space where you can easily meet your neighbor and enjoy camaraderie and cheers new friends. This was the motivator behind the picnic tables, to begin with.

There are outlets and USB chargers all over the place, truly encouraging you to camp out and enjoy the day. Both the picnic tables and the bar will offer charging space! How cool is that? There will be a small stage for live music and events like Haley’s morning yoga sessions.

Future plans include updating the outdoor space with a deck and green space to feature the stunning tree out back. Derek has been working with a group of local mural artists to create a beautiful piece for all to enjoy. Dogs aren’t allowed just yet, but once the backspace is up and running, they will provide that too! 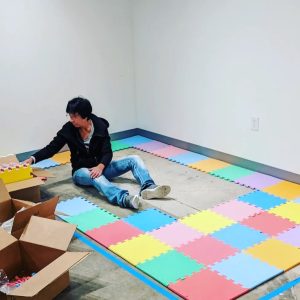 Photo credit to Slackers Brewing; Photo of the kid’s corner being built

Not only does the team want to create an inclusive atmosphere for their patrons, but it’s also imperative that they extend that to their employees as well. The discrimination and harassment many have endured in the food and beverage industry led them to hire the WeVow training platform from the getgo to ensure they’re also creating a safe space for their team. Derek notes, “I got excited about it because I realized not everybody’s gonna feel good talking directly to me or even to the GM. We did a few of the [Brewers Association] conferences especially after the craft brewery ‘Me Too’ movement kind of hit us hard, and it needed to.” Related to the mounted pandemic stress, Haley adds, “The service industry has taken a hard hit, and people are tired, and they don’t want to work for you less than they deserve. This is a family place and when you start working here you’re part of our family.”

Derek concludes, “We’re preparing to have a big, nice social place that people feel comfortable, included, and can kind of just let go. We all need that right now.” Well said, Derek! Welcome to town, Slackers Brewing! Keep up with their happenings on Facebook, Instagram, and Twitter! #SaveTexasBreweries and #SupportLocal