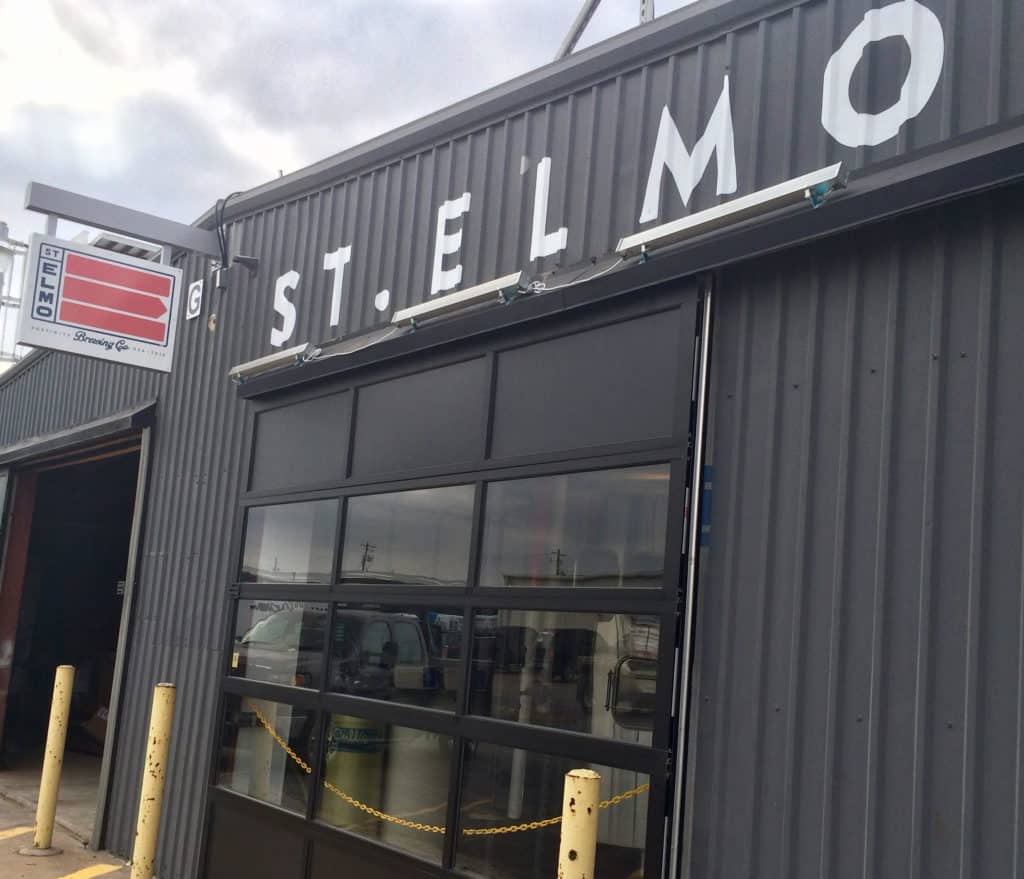 A French Saison, a “Hefe-Barley”and a Kolsch named Carl. These are just a few of the unique offerings you’ll find at the newly opened St. Elmo Brewing Company that show they are not like any other brewery that Austin has seen before. Proprietors Bryan Winslow (Brewer) and Tim Bullock (Front of House Operations) have found a perfect balance between interesting, fun, innovative and delicious at their new brewery and it’s only going to be a matter of time before word gets out. Anchoring The Yard, a new mixed used industrial park set amidst the warehouses and new condos off South Congress in South Austin St. Elmo Brewing, is a comfortable spot to relax, gather with friends and contemplate some exceptional beer.

Meeting while working at Austin Beer Works, Bryan and Tim have created a very thoughtful brewery space and beer portfolio. Brewer Bryan says, “We take making the beer very seriously. We are big beer nerds, but we aren’t going to be pretentious about any of our beers. Our goal is just to have fun.” This sentiment is evident just by looking at their menu board and how they have taken to naming their beers. You’ll see names like the aforementioned Carl alongside names like Chico, Amarillo, Jan, Winston and Evangeline. Each brew is given a unique moniker that describes its flavor profile, an ingredient, country of inspiration or sometimes just a funny name to act as a conversation starter. If you can, seek out a paper menu that gives spot-on single-work descriptors of all the beers that really show off Bryan and Tim’s wit and dry humor. Bryan explains, “Our beers all have their own stories. I started naming beers like this as a home brewer and thought it was a fun way to talk about beer by giving it a name and letting it have its own personality. Just like people a beer can be bombastic, shy, easygoing or approachable. I think this is just a fun way of starting a conversation about what you are drinking.”

Being one of the first establishments to open in The Yard, St. Elmo has already reached out to numerous other businesses to collaborate. They currently have their hearty Winston export stout sitting in some Port barrels from the Winery Austin and have already done some testing on a unique coffee cream ale using beans from The Spokesman, a cafe and coffee roaster set to open later this year. While St. Elmo does offer its beer to-go in growlers, they do not have any plans at the moment to package their beer although they are contemplating some short run brewery-only releases in the future. In the next few weeks they will be self-distributing KEGS to a hand selected 20 or so accounts around town to help build awareness about their brewery.

As man cannot survive on beer alone, St. Elmo also serves pour over and cold brew from Heart Coffee Roasters out of Portland, OR as well as a rotating housemade soda (a strikingly delicious Strawberry Basil available on the day of our visit) and even their own sparkling water they call “Wholly Water.” In case you get hungry, St. Elmo has teamed up with chef Teddy Bricker (formally of La Condesa & East Side King) who has opened his food truck Soursop in the beer garden featuring a diverse menu of South East Asian inspired drinking food including mouth-watering dishes like Sambal Chicken Wings, Grilled Pork Belly Confit and “Pho-tine” a unique Asian twist on everyone’s favorite north of the border snack. 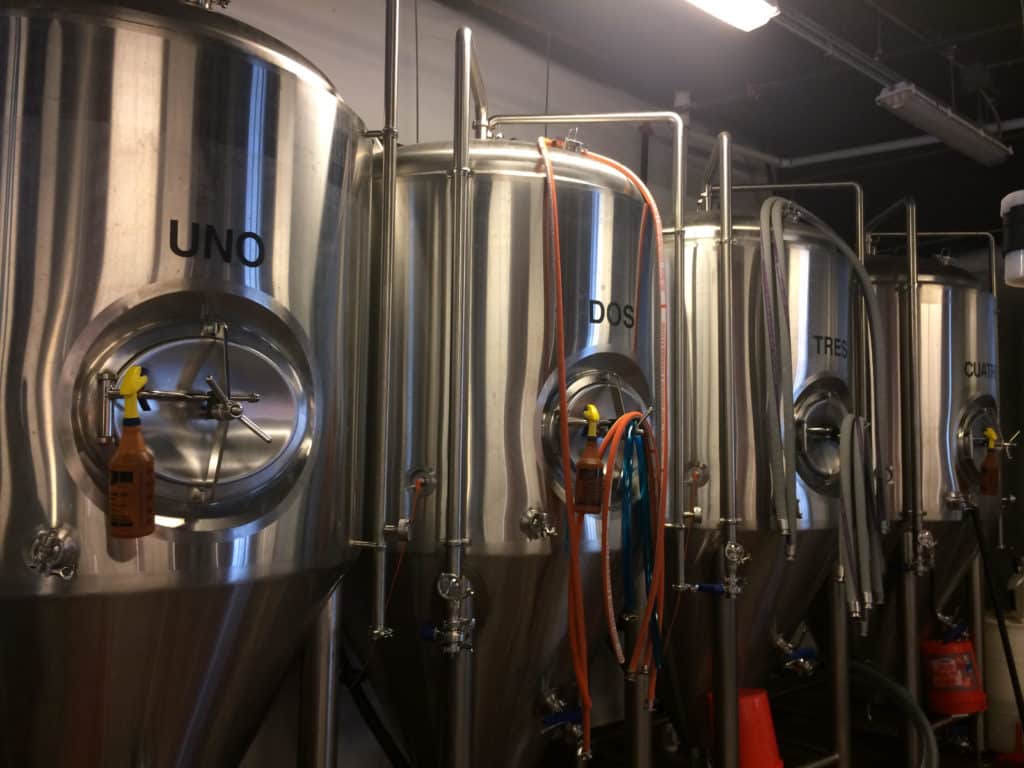 On the day of our visit there were 9 beers available on St. Elmo’s tapwall. They cover a vast array of styles and I was personally impressed with each and every one of them. I can’t think of another brewery that has such an impressive selection of unique, thought provoking beers that are all as perfectly crafted. Every beer I tried was stylistically interesting and exceptionally well constructed. No small feat for any brewery, especially one that is only in its third month of operation!

Carl: an easy-going, true to style Kolsch with just the right balance of floral, grassy flavors with a sharp lager-like crispness and dry finish. As well as this works with Austin’s weather, it is really surprising that we don’t see more of this style around town.

Angus: a very balanced dry stout named after the AC/DC frontman wth a nice combination of roastiness and chocolate.

Jan: (pronounced Yan, although they’ll still pour ya one if you say it differently) A unique German Style IPA showcasing all German ingredients including Weyermann Pils and Vienna malts with Hallertau Blanc & Mandarina Bavaria hops fermented with their Kolsch yeast. Beautifully floral with a nice citrus fruitiness.

Amarillo: juicy and tropical with pronounced flavors of Guava fruit. 75% Amarillo hops with Citra and Cascade to round out the hop flavor.

Winston: an assertive export stout that’d be great with a cigar. Big, rich and chocolatey.

Evangeline: a beautiful, eye-opening French-style Saison. Elegant with hints of lavender and a nice earthiness from the use of East Kent Golding hops.

Dampf: St. Elmo’s unique “Hefe-Barley.” It mimics a Hefeweizen but is brewed without wheat. Bright effervescent with the banana, clove and bubble gum esters you’d expect from “3068” Weihenstephan yeast.

Koufax: another perfect match to the balmy Austin weather this is a very nice Shandy for porch drinking. Crisp, slightly tart and refreshing.

Ramathorn: a unique, high ABV dry hopped Kolsch-Bock hybrid that should be tapped mid/late February to usher in Austin’s two weeks of spring. 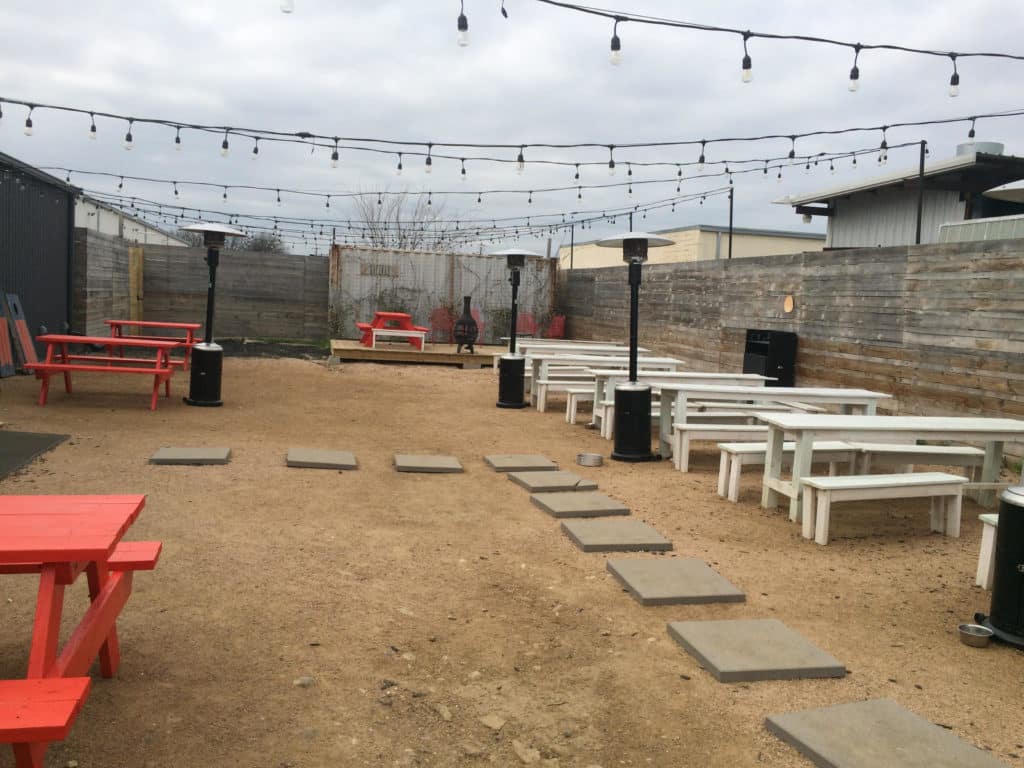