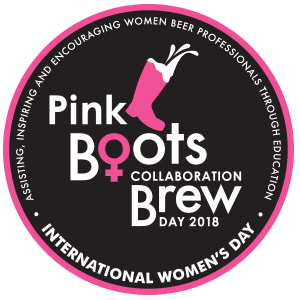 Female beer professionals from all over the Austin area are coming together throughout the week to participate in the annual Pink Boots Collaboration Brew Day.  Held every year in honor of International Women’s Day, Pink Boots members from around the world team up to brew their version of a specific selected beer style. However; this year, instead of focusing on a particular beer style, Pink Boots members will be using a new YCH Hops Pink Boots blend where a portion of the proceeds benefit the Pink Boots Society scholarship funds.

Four area breweries are participating in this year’s event: Hops and Grain, Middleton Brewing, Flix Brewhouse and upcoming Vista Brewing.  I caught up with the coordinators for each brew day to find out more about why they chose to participate.

Why did your brewery choose to be part of Pink Boots Collaboration Brew Day?

Sheila: Hops & Grain focuses on making all individuals feel welcome when visiting our brewery, and that extends to our staff as well. The Pink Boots Society is an awesome organization that allows women in the craft beer community to meet & collaborate often. We are proud to have 5 women on our staff and 2 who are PBS members, all of whom will be brewing this year!

Kiki: I chose Flix to be a part of the PBS Women’s Day Brew to bring light to the wonderful women who work with beer here at this brewpub and to bring attention to the brewhouse aspect of Flix. Most people think that it’s just a movie theater with food and don’t realize that there is a brewery attatched. There loca beer community here in ATX is a strong one and me and Carlo (head brewer) feel a strong attachment to the community.

Lori: This is our third year participating in the brew day. We have several women at Middleton and we love any excuse to hang out with our brewster friends.

Karen: One of the mainstays on the Vista tap wall will be collaborations with other people who are passionate about what they do, from local artisans to chefs to foragers. With the Pink Boots Collaboration Brew Day, we wanted to share the brewing process with not just other women in the brewing industry, but also those who are passionate about and work with beer on a daily basis. From buying to serving to writing about beer, we wanted to invite these ladies to participate and learn about the what happens on a brew day. Our group, under the watchful eye of our Brewmaster Josh Watterson, were able to mill grain, talk through mash temperatures, add hops and transfer to fermenter. As a woman owned business, we want to support the scholarships and other educational initiatives the Pink Boots Society provides for women in the brewing industry.

Tell us about the beer style you chose and why?

Sheila: We chose a hoppy pilsner, because we love hops and well, it’s Texas! So a hoppy beer with a refreshing finish just felt right!

Kiki: I chose to Brew A Belgian Golden Strong Ale as it is just a good style to drink, it’s light and crisp and down right delicious and can be pair indiscriminately with most foods.

Lori: We are brewing a juicy, aromatic pale ale. We were excited about the hops in the pink boots blend and felt they lent themselves to the style. Plus our brewers love playing around with all things hoppy.

Karen: Our Pink Boots collaboration brew is a Zwickle Pilsner, an unfiltered and unpasteurized German-style lager. This beer will pour a hazy golden hue with a fluffy white head that lingers on the glass. The aroma will emphasize the signature Pink Boots hop blend made especially for this project by our friends at Yakima Chief Hopunion (which also donated a portion of hop sales to Pink Boots). All participating breweries across the country are using this same hop blend and brewing for International Women’s Day (March 8). Palisade, Simcoe, Loral, Citra, and Mosaic hops are in this special blend giving a very fragrant aroma of citrus and pine. These were added as a “dry-hop” addition to accentuate the body without compromising the balance and drinkability.

When will the beer be released to the public?

Sheila: Beer does what it wants, but our goal is to have it released at the end of March in our tasting room.

Kiki: It will be released in 14 days from day of brew

Lori: We’re releasing it in our brewpub at the end of March and will send it out to a few accounts in April.

Karen: This beer will be ready mid-April, and we’re planning to host the Austin Pink Boots monthly meeting and do a tasting event of all area breweries who did the collaboration brew. I’m excited that this will be one of the 9 recipes that Vista opens its doors with!