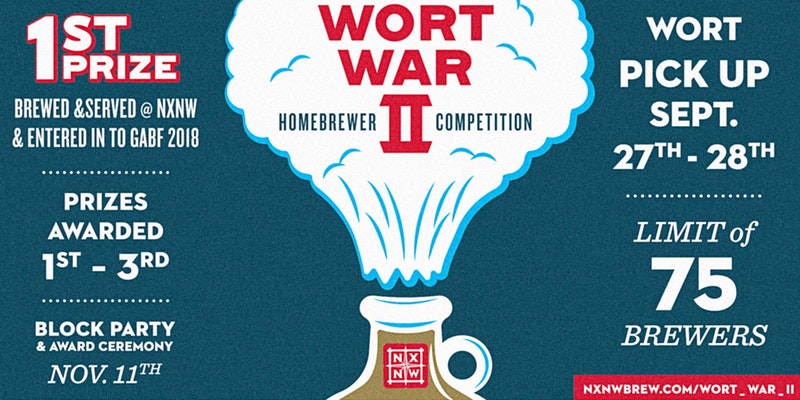 This year marks the second installment of the homebrewer focused competition held by NXNW Restaurant and Brewery.
First, the unique approach to a Homebrew Competition starts with each contestant picking up 5 gallons of pre-made wort from the NXNW Brewery-Slaughter location on September 27th and 28th. The finished product is only limited to the contestant’s creativity, knowledge and skill with the end goal of producing a quality brew unique to that individual. The winning recipe will be brewed and served at both NXNW locations and entered into the Great American Beer Festival in 2018. The winner will be awarded an exclusive entry into the Great American Beer Festival (GABF).
I sat down with Head Brewer Hayden Winkler to find out more about Wort War II and the inspiration behind it.
How did Wort War get started?
Started out as an event that we wanted to put on to bring homebrewers together with pro-brewers. We aren’t all that different, and sometimes there seems to be a divide between the two. We wanted to break this and have a fun, new, interesting, and collaborative event together that showcases our passions.
What inspired you to do a homebrew event?
The idea of bringing everyone together and celebrating our love for crafting unique and tasty beers. Also, there was the idea that there isn’t any large brewery event that focuses on the talents of local homebrewers. We wanted something different and unique.

Tell us more about the GABF entry.
While we can’t’ actually enter this as a “Pro-am”, we use one of our spots, as a brewery, to enter this beer into the GABF competition. We brew it here at the brewery, serve it on tap to the general public, and enter it into whatever category the winner’s beer falls into. This year we have entered it into category 97 Old Ale/Strong Ale. It will also be served on the GABF tasting floor alongside thousands of other beers. Much to our surprise, the feedback from the homebrewers of being able to compete against pro-brewers (as opposed to other homebrewers in the Pro-am category) was really positive and created a lot of excitement.

What can we expect at the block party on November 11th?
The block party will have all the usual enjoyments of beer, food, prizes, and entertainment with the addition of a homebrewers’ tasting (meet the homebrewers) tent that allows the wort war participants to sample their beers to the general public and have real-time feedback. Consumers will have tokens to vote for the favorite beer and a people’s choice prize will be awarded along with the awards for 1st, 2nd, and 3rd, which are determined by professional judges. There will also be beer education brought on by SoCo homebrew and The Beer Museum to help inform and educate attendees.

What’s next for NXNW?
Cans. Right now we are working on a canning line to be purchased and installed into a production room that will take over one of our private dining rooms. Large windows will allow patrons to view the line and see the action in progress. We are really looking forward to the expansion and being able to serve a portable and delicious craft beer to people into their homes and on their outdoor adventures.