Although Banger’s Sausage House & Beer Garden has been closed since March 16th due to that pesky pandemic, they are not letting it spoil their anniversary fun!

Krissy Carter, Director of Event Operations, shared, “During this time, we have worked diligently to plan and prepare for when we might reopen. Though we don’t have a date in mind just yet, we did know one thing- we want to celebrate Banger’s 8 Year Anniversary (even if it’s in quarantine, and from home)!”

We are one week away from our anniversary party in a box! We are super excited for our 8 year 8 pack of beer, curated by our own quarantine bartender, Steve. All local. All awesome. To get yours check the link in our bio. @indybrewing @zilkerbeer @liveoakbrewing @laststandbrewing @austinbeerworks @friendsandalliesbrewing @whitestone_brewery

Banger’s has put together a clever Anniversary Box to allow their fans to celebrate alongside them…but at home. How cool is that? There are 3 versions you can order, The Basic Brat Box, The Big Brat Box, or the Boujee Brat Box.

Though this is not the epic sausage and beer festival of anniversary parties past, if you crush all 8 sausages and down all 8 beers, it’s sure to be a good time, at least until the morning… 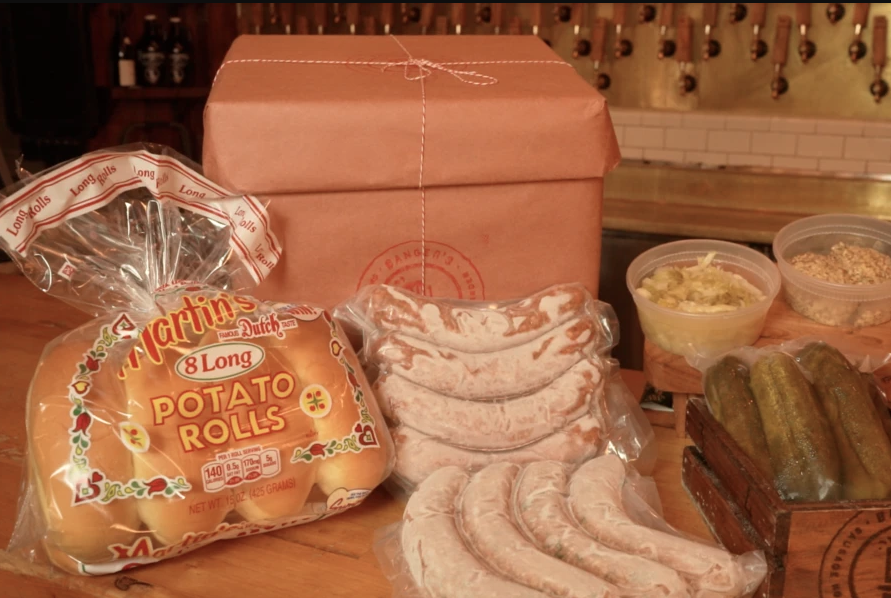 If you have not had the pleasure of stopping into Banger’s before quarantine, Banger’s Sausage House & Beer Garden is a family-owned and operated Restaurant & Events Venue on Rainey Street in downtown Austin, TX. It opened in the summer of 2012 and now has the largest draft beer system in the Lone Star State (202 taps), a smokehouse that is home to Texas’ first-ever whole hog BBQ, and a sausage kitchen that cranks out 2,000 lbs of fresh sausage every week. All housed in approximately 20,000 sq/ft of Texas-sized hospitality with an Austin soul.

You can preorder the box on their website www.bangersaustin.com starting today and will continue until they sell out. You can pick up your box on their anniversary weekend, July 31st through August 2nd from the hours of 10 am – 4 pm.

What an innovative, creative way to keep Banger’s fans involved in the fun! Grab your pre-ordered Anniversary box today! Help support this awesome local business so we can cheers them to another 8, and another, and so on…! #SupportLocal