Most of us have been put out, inconvenienced and financially disadvantaged by Covid-19, but when you’ve put years of planning, preparation, love, and investment into building your very own brewery taproom, only to have it closed down just two weeks after your launch party, that’s got to be a huge kick in the head, right? Well yes, but for Barking Armadillo’s Jacob Trimm and Brian Cantu, they are not only weathering what has been a catastrophic storm for many small businesses, but they have also been able to rely on the support and encouragement from a local community delighted to have its very own craft brewery for the first time.

“The community has really helped keep us afloat” says Brian “There’s nowhere like this to drink on our side of the I-35 and we want to be a local hangout, a community brewpub”. This ethos is not COVID-19-specific – Barking Armadillo was always destined to be somewhere that served the community. Their tagline ‘Your friendly neighborhood brewpub’ perfectly captures the vision that childhood friends Brian and Jacob have for their brewery, and the current climate may have closed some doors but it has opened others. Jacob comments that “Lots of people don’t want to travel into the city right now – it’s better for them to have somewhere local that they can access easily. Lots of people can walk and bike here.”. And they are. Since Barking Armadillo has closed for drink-in, they have moved to adapt swiftly and efficiently to serve beer-to-go to the local community. Although they had originally planned a slow segue into takeaway beer, they were able to accelerate rapidly, with an order for 600 growlers and canning equipment en route, in order to capitalize on the big local response to their two opening weekends. Queues for entry and positive reviews established their reputation quickly enough to encourage a consistent to-go consumer base because adds Brian “People want us to be around when this is over”.

Anyone who has ever lived somewhere without a local pub or brewery will know exactly what he means. As brewery taprooms continue to proliferate, the luxury of walking or cycling to your local drinking-hole is no longer limited to city-dwellers. The huge Barking Armadillo space in West Georgetown was chosen by Jacob and Brian because it not only gave them substantially more square-footage for their buck, it also offered them the chance to serve an untapped local craft beer market. “We’re starting out with lower-ABV beers so that we don’t scare away drinkers who aren’t familiar with craft beer,” says Jacob, “We want to showcase as much variety as possible so that there aren’t drinkers who feel left out – we want to make the brewpub as accessible as possible, as having just one or two styles would limit our customer base”. With their current selection already including eight of their own beers, including a Hefeweizen, a Saison, an IPA, a Coffee Stout, and an Irish Red, they are already well on the way to achieving that goal.

**ANNOUNCEMENT** Governor Abbott has announced that craft breweries can open at 25% capacity indoors, following certain guidelines. We want to let you know what precautions we are taking to optimize the safety of our staff and patrons. – We ask that anyone with symptoms of COViD-19 such as shortness of breath, fever, cough, and anyone with contact with a person with symptoms refrain from visiting our establishment. – Hand sanitizer is available at the entrance. Please use upon entry. – Our employees will be wearing masks and we encourage patrons to wear masks as well, when possible – Bar seating has been removed. Please do not order or congregate at the bar – Only seated parties will be served – We have removed some tables/chairs and added signage – all tables both indoors and outdoors are spaced greater than 6 feet apart to ensure social distancing – Maximum party size is 6 – Frequently touched surfaces will be sanitized often – Single use plastic cups are available upon request. We ask that you recycle them. – Arcade/lawn/board games will be unavailable until further notice Taproom & Curbside Hours beginning Friday 5/22: Friday 4-10pm Saturday 12-10pm Sunday 12-7pm [We plan to start Thursday hours next week] If you are not ready for on-site consumption, we understand. We will still be offering curbside to-go beer orders during the above hours as well (please note hours have changed). We encourage use of our online ordering site for to-go orders (click on the Link in our profile or go to www.barkingarmadillo.com) @takavron , our food truck partner, will be on-site as well during our open hours for both dine-in and to-go orders. We apologize in advance if we are unable to seat you or for any wait times. Please understand we will be operating at limited capacity and be patient with us while we navigate this “new normal” for taproom-based craft breweries. #covid19 #socialdistancing #georgetowntx #supportlocalbeer #craftbeertx #beertogo #reopeningtexas

Variety isn’t just about meeting demand though, as both Jacob and Brian love to try different beers themselves. “That’s the fun of the research” says Brian, “We get to drink great beer, figure out what makes it great, and think about how we can make it even better”. This is the passion for learning and discovery that put the two childhood friends and third partner Amanda, Jacob’s wife, onto the path towards starting their own brewery four years ago. Already homebrewing aficionados, they began giving away their beer to friends and neighbors, and, realizing it was a hit, took on immersion training with Tom Hennessey of Colorado Boy Pub & Brewery in Ridgway, Colorado. The friends-and-family enterprise also brought together expertise from Jacob’s uncle and father-in-law, and Barking Armadillo became a reality with beautiful hand-crafted wooden furniture and a ten-barrel brewing system. 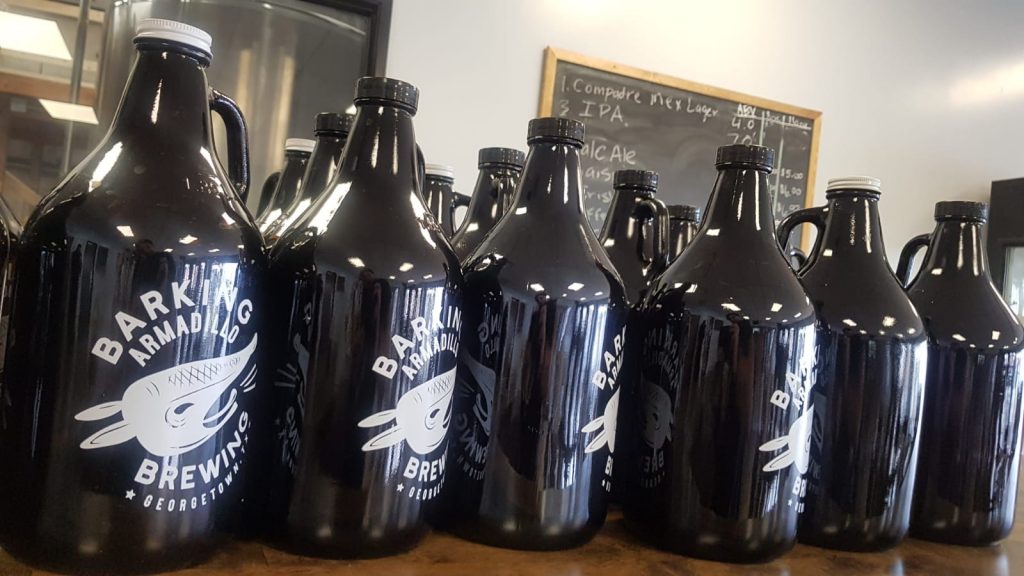 Brian and Jacob have nothing but praise for the support and encouragement they have received from the regional beer community, a crucial source of advice and information at such a challenging time, but also a key part of what makes the Austin-area beer scene so special. Jacob says “Other local brewers have been really positive whenever we’ve reached out to them – it’s not about competition and more about community”, something that’s pretty special and uplifting, especially right now. Brian and Jacob both cite numerous sources of beer-inspiration – choice, quality, and individuality are qualities they admire in breweries ranging from Oddwood Ales to Ommegang to Funkwerks to Spindletap. If surviving a pandemic as a brand new brewery is a baptism of fire, West Georgetown can expect Barking Armadillo to be glowing brightly for a long time to come.