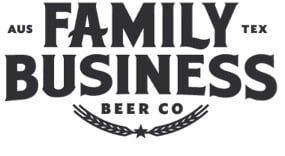 Those of us in Central Texas are blessed with a veritable cornucopia of breweries to choose from. Some of those function as our local watering holes, just down the avenue from where we live. Other times, you need the simple pleasure of getting out of the built environment to relax under the shade of some oak trees while enjoying a delicious brew. If you haven’t had the opportunity yet, one of the newer places to do this, and certainly one you should have in your regular visit rotation, is Family Business Beer Company.

Located just west of the headwaters of Ranch Road 12 at 19510 Hamilton Pool Road, the young brewery is four miles shy of Reimer’s Ranch and five miles closer than the Hamilton Pool parking lot, assuming you’re arriving from the east. Not only is this a fine getaway from Austin, but it’s easily accessible from those in Dripping Springs, Wimberly, and Lakeway as well.

Family Business is truly that, a family business. The brewery is the brainchild and labor of love of the Graul family, with Ed and Debbie, the parents of Danneel Ackles (nee Graul) who is an actress married to Jensen Ackles (he’s known for Supernatural but really, One Life to Live, where both actors worked, holds more wow for me), and brother/operations manager Gino, a Siebel Institute graduate who is working on his Cicerone certification. Follow this up with an Austin-born-and-bred brewermeister, Nate Seale, former head brewer at (512) Brewing Company (credits on Cascabel Cream Stout, Wild Bear and partial on Pecan Porter, among others), and you’ve got a great executive suite going. Their vision for the place carries the theme of their name, and it’s one of the things they like most about their place, they work to create a space where families and friends can come together to enjoy good craft beer, good music, and delicious food in a beautiful setting.

And a beautiful setting it is. The 15-acre property is classic Hill Country with dry grasses, lots of limestone, and plenty of oak trees for shade. You park at the front of the property and walk toward the back to get to the brewery. On the way you’ll see a classic two-story farmhouse that looks awesome to hang out in…if only it were open to the public. As it’s not, head back a little further to the red “barn” in the back. That’s the brewery and it’s not barn-like at all, it’s a huge metal building wrapped on one side with a wide patio, housing the brewhouse and taproom.

The patio has plenty of tables and has stools along a high counter which lines the outer edge. The view from the counter overlooks the grounds where countless picnic tables are spread among the oak trees, providing a shady oasis to enjoy your time here. In the back there’s a food trailer, snow-cone hut, huge fenced-in playground and what appears to be a bocce ball court. Step inside and you come upon a large, open taproom with clean bathrooms, a stage, high tables, and the bar. Behind closed doors and visible through windows is the brewing operation.

The building covers 13,000 square feet, with maybe half of that covered by the brewing operations. For the numbers nerds, they have a 15 barrel (BBL) brewhouse from Deutsche Beverage Systems with two 15-BBL and three 30-BBL fermenters, along with a 15- and a 30-BBL bright tank, capable of up to ~2,500 barrels-per-year production. In layman’s terms, they can make as much beer as you care to drink, have plenty left for everyone else, and send some out to their 20-or-so accounts around Central Texas.

When it comes to the beer, it’s just one word: Variety. Everyone involved in Family Business is a beer lover, of course, and they all love having a variety of beers to choose from. This gives the head brewer, Nate, the freedom to explore and brew beers of disparate styles on their pilot system, which, upon approval by staff can become regulars on the tap list. The image below uni their list shows their variety. From Kolsch to pale ale to saison to stout to sour and back again, you’ll be able to find the beer you want. They always have 12 beers on tap, with the ability to extend to 16 taps. While visiting I drank a flight and a half pour, and let me tell you, their bar service is beyond reproach. No long line here. They had three cashiers taking orders and another two people pouring the beers. Efficiency, you gotta love it. 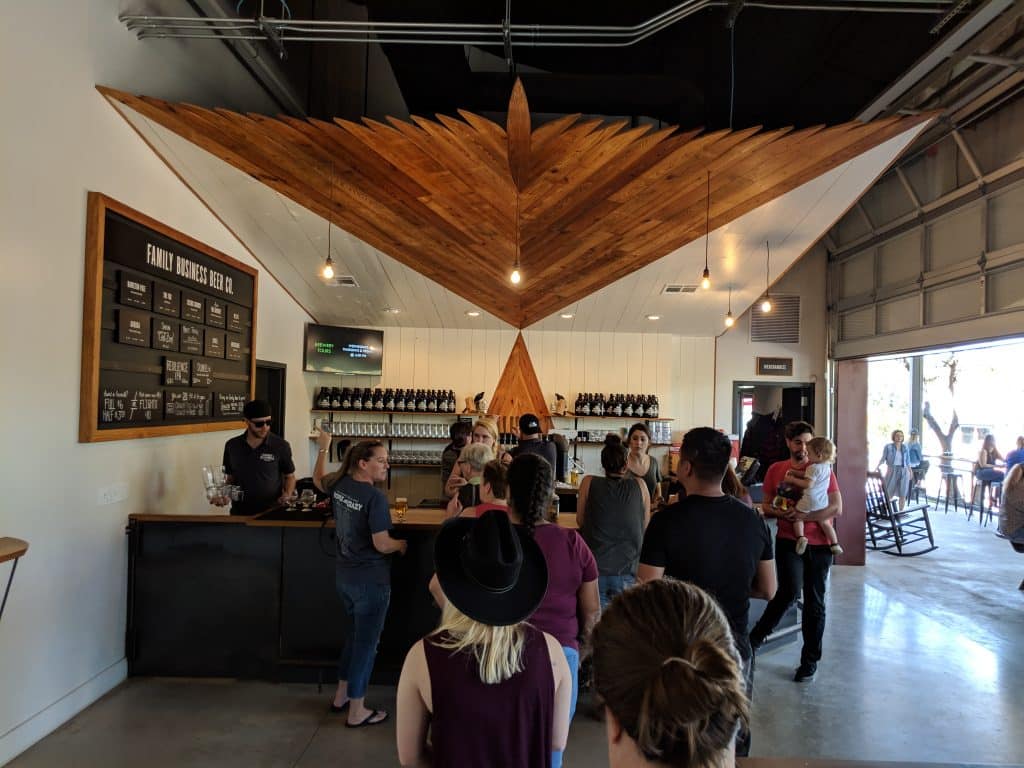 In the flight, I had The Fox, Peace Train, Spree, and Aurora, and for the half pour the flagship Hamilton Pale. I found The Fox, a rye Pilsner, to have some surprising bite to it – very nice – and a smooth maltiness after. Peace Train, a Hazy IPA, had all the notes of a fine NEIPA but I don’t think the “Haze Bois” will drool over this one (so sad). That said, it was juicy with citrus and tropical fruits and a mellow mouthfeel. The Spree, a Berliner Weisse, was light, tart/sour, and effervescent, something to sip on hot days when you’re having more than one. The Aurora is a Vienna-style and true-to-style. A nice copper color with a malty depth and a crisp finish. The Hamilton Pale, much like the pool, was light and refreshing and something you could hang out in all day long. I’ve had the Grackle, an Imperial Stout, around town and remember it being deep and toasty and I really wanted to try their rendition of Resilience IPA but, alas, I’m a responsible driver. Having seen the press, you may think Family Business is founded on the “gimmick” of celebrity but my impression is of a beer program and experience that is full-on legitimate. They know how to brew, the beers are on point, and the atmosphere is relaxed and inviting.

I took time to walk around the grounds and while there isn’t miles and miles, there’s plenty of space with lots to do. Tables and barrels are dispersed all through the wooded area and corn hole games are available throughout. The aforementioned playscape is large, big enough that parents were climbing up to the second story with their kids (been there). They cater to dog owners with multiple dog-baggie stations and a space set aside for the puppers to run around. They have a broad space that is good for throwing Frisbee and was put to use while I was there. And the patio, it has rocking chairs that are perfect for cooling off and rocking while drinking a beer…I may be getting old. 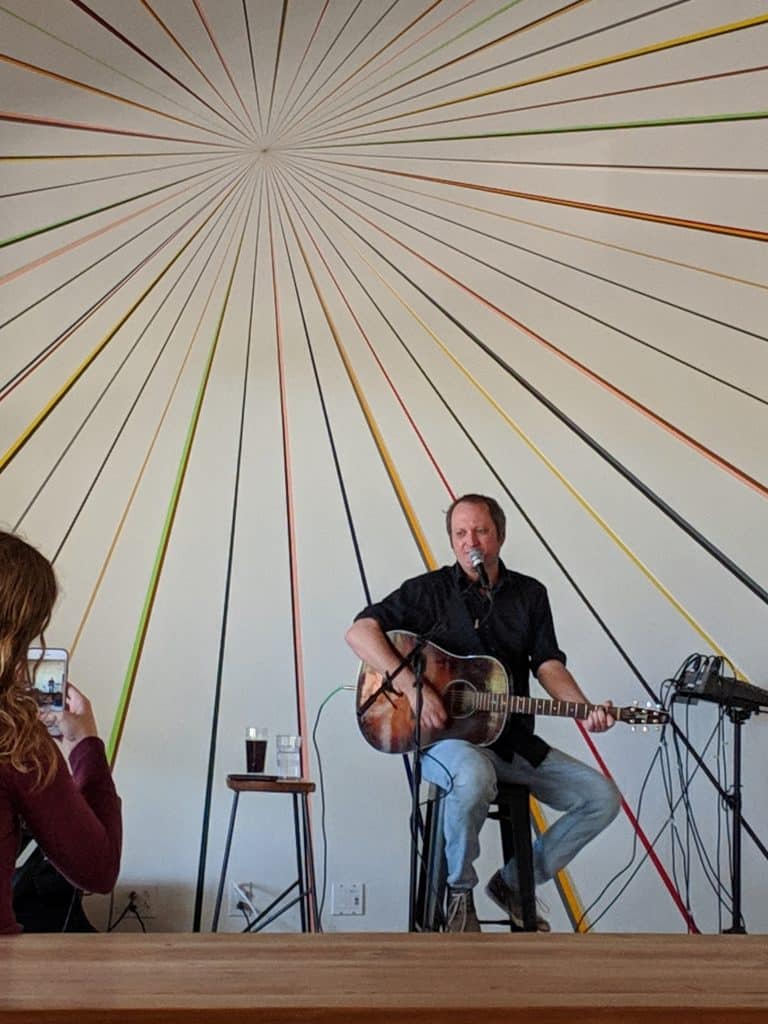 The taproom has a stage where they have a regular line-up of musical acts. There is a food trailer in the back called Jep’s Southern Roots. The trailer is operated by one of the Duck Dynasty people and serves up Southern comfort food and Cajun staples like po’ boys, jambalaya, and assorted pot pies. I also saw a snow-cone cabin but it wasn’t open when I was there. You can get growlers to take home and they also offer 16oz crowlers so you can take home a variety of beers without having to double down on any one beer. Their merch store is off the back of the taproom and has a full complement of shirts, hats, and other items like a growler tote that looks like it time traveled from World War II, well used.

Rumor has it the future holds many opportunities for Family Business. There are plans in the works to increase their distribution to more places around Central Texas and they want to keep their barrel program strong, which includes a good friendship with Garrison Brothers of bourbon fame. Also, we may begin seeing some cans around town of their flagship beers and the occasional special release in large-format bottles.

Tours of the brewing operations are available Wednesday through Friday. Check the website for updated times familybusinessbeerco.com 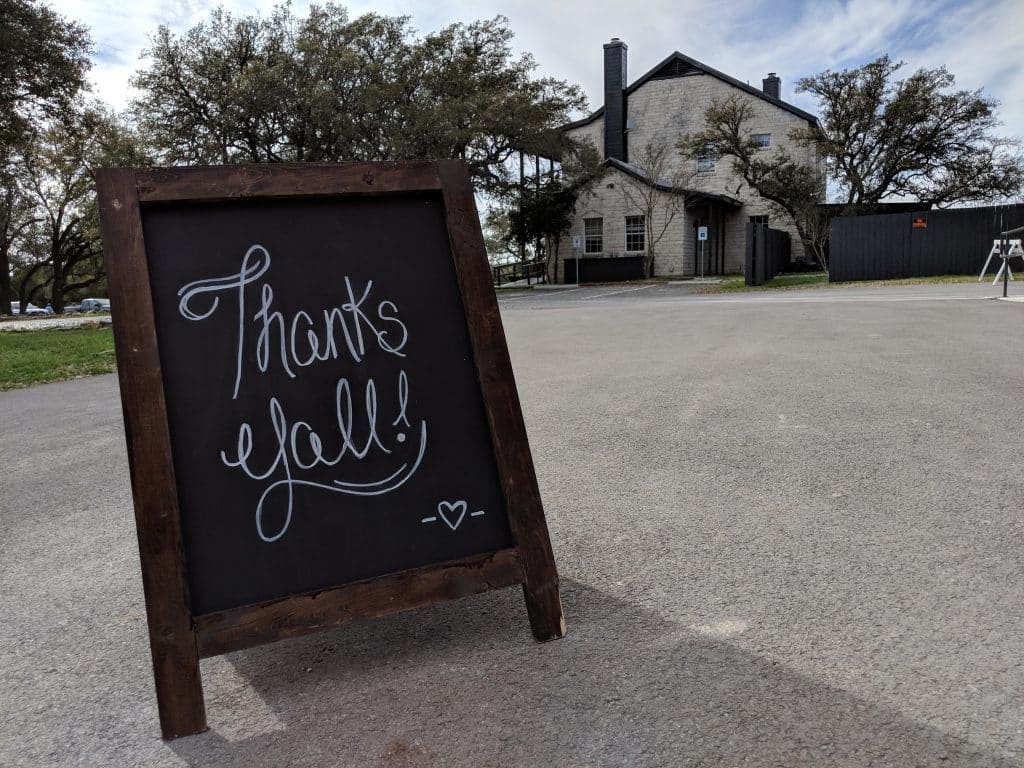