Held every year in honor of International Women’s Day, Pink Boots members from around the world team up to participate in the annual Pink Boots Collaboration Brew Day, brewing a beer of their choice using the unique YCH Hops Pink Boots blend, with a portion of the sales from each benefiting the Pink Boots Society scholarship funds.

Last year, the Pink Boots Society Austin Chapter, lead by Rebecca Garcia and Shelia Garcia, hosted a record number of collaboration brew days with twenty-one breweries signing up to do a collaboration beer, most occurring right before the city was shut down by the pandemic. Although it was a record, the pandemic thwarted the full potential of fundraising for the chapter, with some breweries unable to even sell their beer.

This year, record brew days are again in full effect, with many of the participating breweries limiting participation to their staff and small groups. Although it looked different this year, there are still a record number of collabs coming your way! Below gives a rundown of what breweries in town are participating and when their beer will be released.

“Our 2021 PBS beer is called Cast a Spell, which is an IPL at 5% ABV. It’ll be an easy-drinking, clean, crisp beer that will be especially refreshing in the warmer months. The name stems from the history of brewing being a predominantly female occupation until they were pushed out due to gender norms. Some were even accused of witchcraft. This collaboration is important to us because it’s a great way to highlight an organization that’s provided education and opportunities to women in the fermenty industries. We also think it’s a fun collaboration when we get to be involved all the way from the beginning – hop rub and selection to sampling all the variety of beer styles from all the local breweries participating! It’s just an example of the infinite possibilities of beer that we’re excited to participate in this year.” – Amanda Trimm, Co-owner

Brewed in collaboration with the Pink Boots Society, this fruity, juicy IPA is double dry-hopped with the 2021 Pink Boots Hop Blend. 7.0% ABV. “Supporting our community and advocating for a more just society are two of our main objectives here at Black Star Co-op. Because the Pink Boots Society champions women in the brewing industry, every brewery gets the privilege to open its doors and minds to a more inclusive and welcoming beer scene. Each year this collaboration effort reminds us that it truly is the people that make this industry so awesome.” – Andy Martinec, Head Brewer

“Pink Boots consists of women from all different backgrounds who focus on educating and elevating the women around them. I am proud to be a member of such an amazing group of women. This is the reason we started brewing with the Pink Boots blend last year. The more that can be contributed for scholarships to empower more women in our field the better. In our Blushing Bines IPA, the hops are the star of the show. At 7.3% abv and 60 IBU’s this wonderful brew is light in color and crystal clear and just goes down so smooth.” – Clare Hulama, Co-owner, and Assistant Brewer

“Here at Bold Republic Brewing, it is super important to us to have female input in all areas of the beer-making process.  Women are not only consumers of beer but have amazing palettes and an often-overlooked skill set. My husband and I truly are a team when it comes to designing our beer lineup, we each bring a unique and valuable set of tools to each brew.  Almost all of our front-of-house staff is female, and we encourage their feedback on beer styles as well as invite them in to learn more about the brewing process. My husband and I both come from a teaching background before entering the brewing industry, so it is natural for us to want to educate and get our employees passionate about our products. The Pink Boots Brew Day Collaboration has so many benefits.  First of all, it is an exciting project which gets the creative juices flowing and engages our employees to research hops and beer styles that lend themselves to the blend.  Secondly, it is empowering.  I absolutely love it when a customer is ordering and my bartenders say “I brewed that.”  The sense of pride our staff has in the project is an immeasurable reward. Lastly, the Pink Boots Brew Day truly creates a sense of community for females in brewing and it is so cool to see what everyone else comes up with.” – Adriane Hodges, Co-Owner

“The Pink Boots initiative and release weekend are important to me because not only does it connect all the women in the industry and shows those women just how many other women are in it with them, but on release weekend it highlights for everyone who comes into the breweries the magnitude of female involvement in the industry that they might not have realized before.” – Maria Mignano, Taproom Manager, and Event Planner

“One of the things I’ve always found so appealing about the culture around brewing is how accommodating and helpful almost all of the brewers you run into really are.  The sense of community around brewing is huge.  But if that community isn’t inclusive then it’s not a community; it’s more of a private club.  Brewing should always be inclusive and everyone should be welcome.  Doing a collaboration with the PBS is just one small but important step at making sure the doors of the brewing world are open to anyone that wants to step through.  We couldn’t be happier to take part in this collaboration in just our first year of being open.  We can’t wait to share the beer with everyone!” – Nathan Rice, Head Brewer

The dynamic team at Hold Out took a novel approach to the collaboration this year by brewing four different beers with the Yakima Chief Pink Boots Blend inspired by four women on staff. The beers were also brewed with St. Elmo’s yeast strain from Carl & Head Brewer Meike Rossman joined the team to brew the beer.
Release Date: April 16th

It’s a hazy IPA using the 2021 Pink Boots Blend from Yakima Chief Hops (2020 crop year).  The ABV is 7.2%, and the IBUs are 58. “It’s important for us to participate in this collab to showcase and support the badass women in craft beer! Being a woman in an industry dominated by men and so many male consumers is challenging and sometimes feels like we’re constantly trying to prove that we CAN like and know about beer. Cheers to all the cool chicks out there killing it day in and day out!” – Hailey Lee, Assistant Manager/Social Media Coordinator

“For one we have more women than men working at Infamous. The ladies keep us in check so we don’t get too carried away with boyish tomfoolery. Really, it’s a great opportunity to try new blends of hops created by the women of craft beer and to create new recipes that would otherwise be outside of our wheelhouse. The best part for me is to get the ladies more involved in the brewhouse process side of beer, it’s always a fun time with lots of beer and laughter.” – Josh Horowitz, Owner

An approachable Double IPA, brewed in Pinthouse fashion, in support of The Pink Boots Society. Brewed on National Women’s Day at two of our facilities, this beer is designed to highlight the 2020 crop of the Pink Boots Blend from Yakima Chief Hops. A highly drinkable juicy beer with huge notes of ripe guava, pineapple, and mango. “Brewing is rarely seen as a career path by women. There are so many diverse possibilities between brewing, packaging, and quality control. We hope exposing some of this through the invitation to all of our female staff helps bring light to the possibilities within our industry. It is also a great opportunity for all of the females who work on our front of house staff to feel engaged and confident about our beers – understanding the process is everything.” – Kristin Hanks, Production and Hospitality

Release Date: April 10th in cans at all four locations

“At St. Elmo, it’s important to us that we brew the women’s beer because we understand how important representation is right now. It’s about taking a group of women who are vastly different from each other and bringing them together under one purpose and one goal. And in doing so, it ends up being about much more than just brewing the beer – it’s quality time together where we learn together and do something meaningful for women in the industry as a whole. We let the community know that our role here is important and that our presence deserves to be celebrated, too.” – Jade Leder, Assistant General Manager

“My favorite beer of the year is our Pink Boots Collaboration brew: Zwickeled Pink!   It’s not only my favorite because a group of awesome women join us for the brew day, but it’s also an awesome style for springtime in Austin: a dry-hopped Pilsner. Crisp and hoppy on the nose, coming in at 5.3% abv, you can really explore 2021 Pink Boots Hops Blend (Ahtanum, Cashmere, Citra, Loral, Sabro) which we used as a dry hop.  This is our fourth year in a row making this recipe, rotating that PBS hop blend each year. As a female-owned business, we are proud to support the national and local chapters of Pink Boots.   On a company level, Vista values and focuses on education, with classes that we host and non-profits that we work with.  I personally value the connections I’ve made with other women in this industry, both locally and across the country.  I love the monthly meetings when I can attend, as it’s an awesome support network and educational opportunity.  Vista is proud to support the cause with a charitable brew! ” – Karen Killough, Co-Founder

This fruit-forward beer is infused with pink guava and passionfruit puree for a tropical fruit flavor upfront and double dry-hopped with the Pink Boots hop blend for a citrusy tropical finish. A medium malt body provides a perfectly drinkable balance that will keep you wanting more! (ABV: 7.0%) “Brewing this Pink Boots Collaboration beer was important to us because the brewing industry should be a place where all people feel welcome and safe and everyone should have access to similar opportunities and be treated equally, and unfortunately there are still times where that is not the case.  At Whitestone Brewery, we want to be a contributor to the fight for equality for everyone as well as be a safe space for anyone, and the Pink Boots Society helps empower women beer industry workers and provides them with access to the resources needed to feel comfortable in a heavily male-dominated industry, so we’re excited to be able to donate funds to such a great organization.” – Jackie Abeyta, Marketing and Event Coordinator, Whitestone Brewery 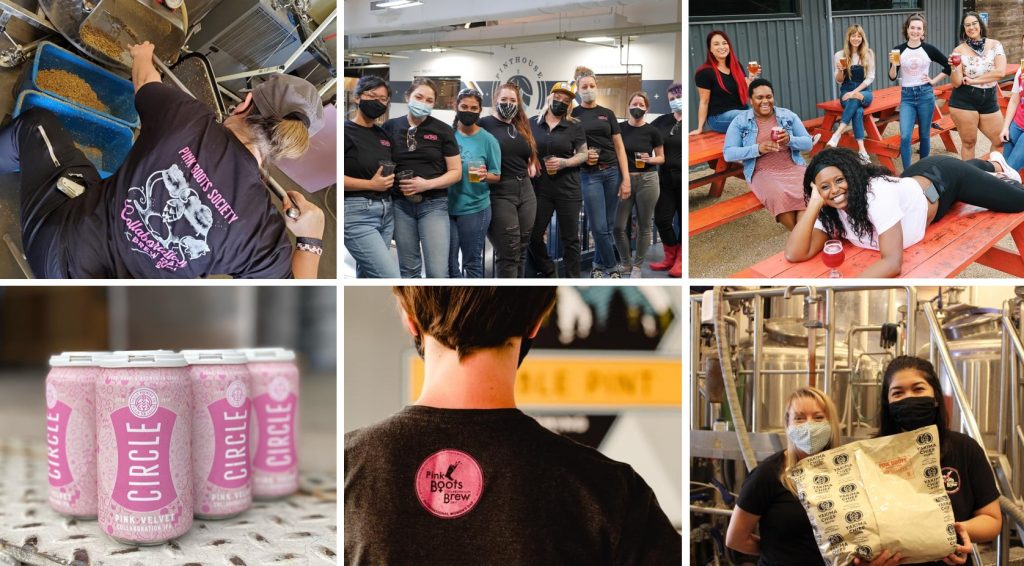