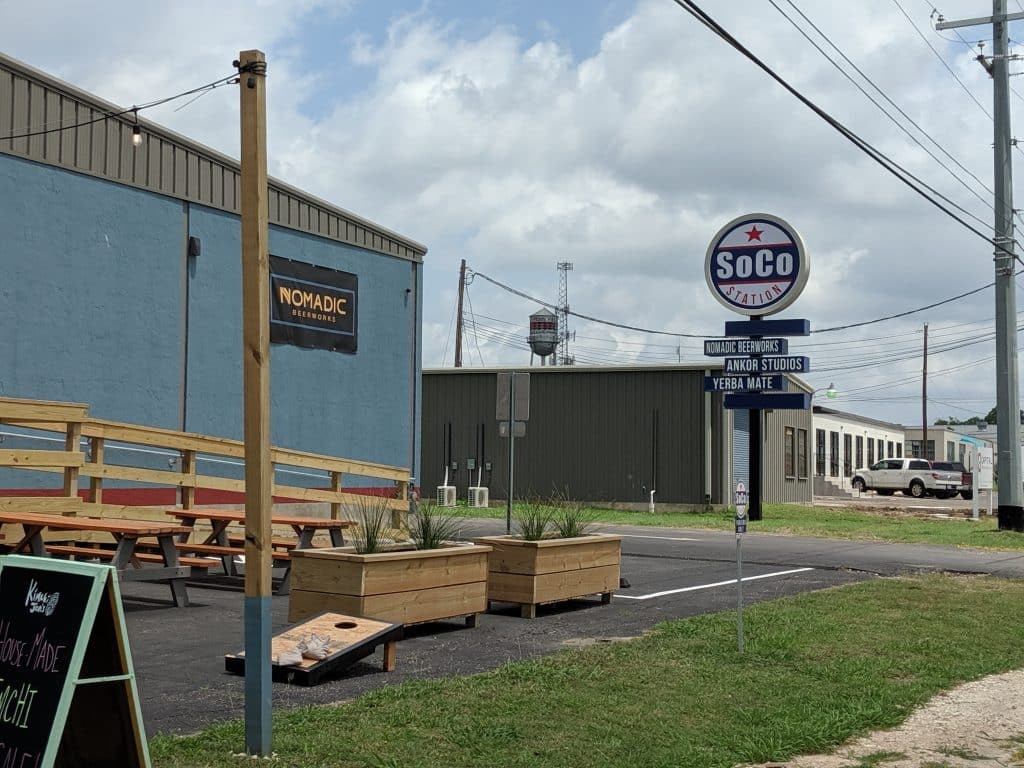 Recently I was in need of a hitch to be installed on my wife’s minivan. I decided to head over to U-Haul on Ben White to do that, and just before leaving noticed an article from Craft Beer Austin stating Nomadic Beerworks was having their soft opening. Having a couple hours to kill, I took the short walk over to Nomadic to see what they had to offer.

You may have read some of their early press releases here.

Nomadic is a team of two brothers, Dan and Bryce, who love to travel and drink craft beer. They turned this love into their vision of a brewery here in Austin, adding to the Southside brewery scene (Dan calls it the “Brewery Socks” vs. the Northside’s “Brewery Belt”).

Dan is the people person and runs the front of house, having built a lot of the furniture from reclaimed wood and hardware and he poured the concrete bar himself. He used to be in procurement for GM, probably a good experience for owning a brewery. Bryce is in charge of the brewing operation, having worked at Fort Point Brewing in San Francisco and pulling a stint brewing at Hi Sign just down the road before opening Nomadic. They run a 7-barrel Glacier brewhouse with two 5-barrel and two 10-barrel fermenters. That brewhouse puts out some fine beers too. 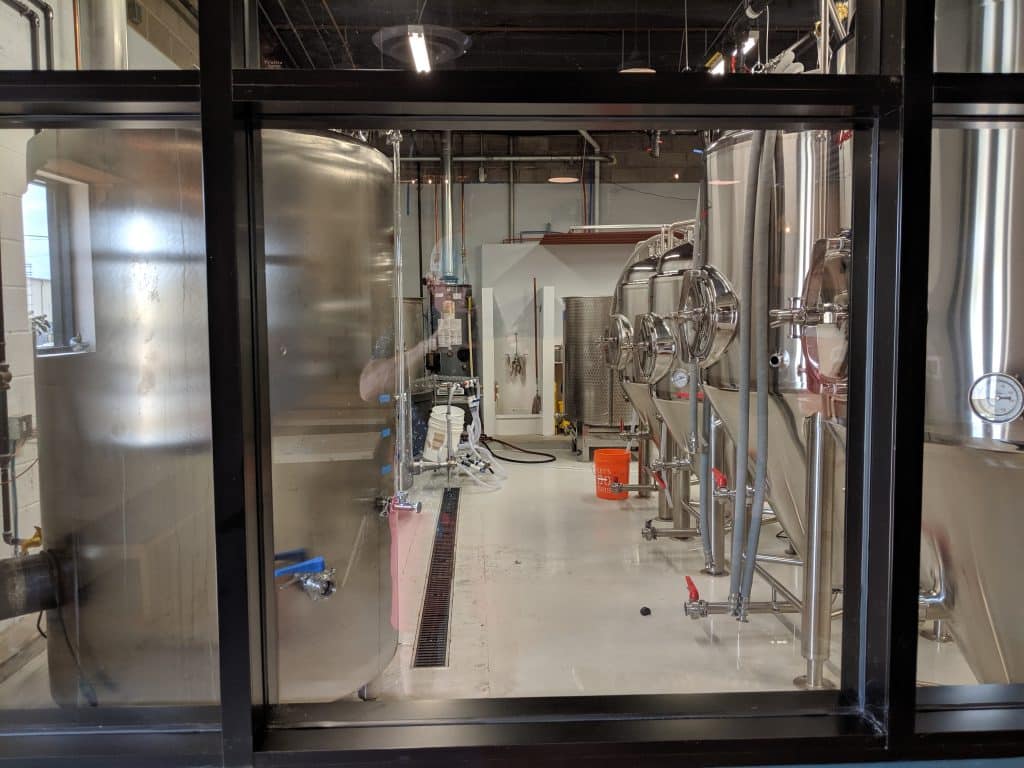 Opening weekend can be difficult for any business, perhaps more so for a brewery as there’s a lot to work out before opening. 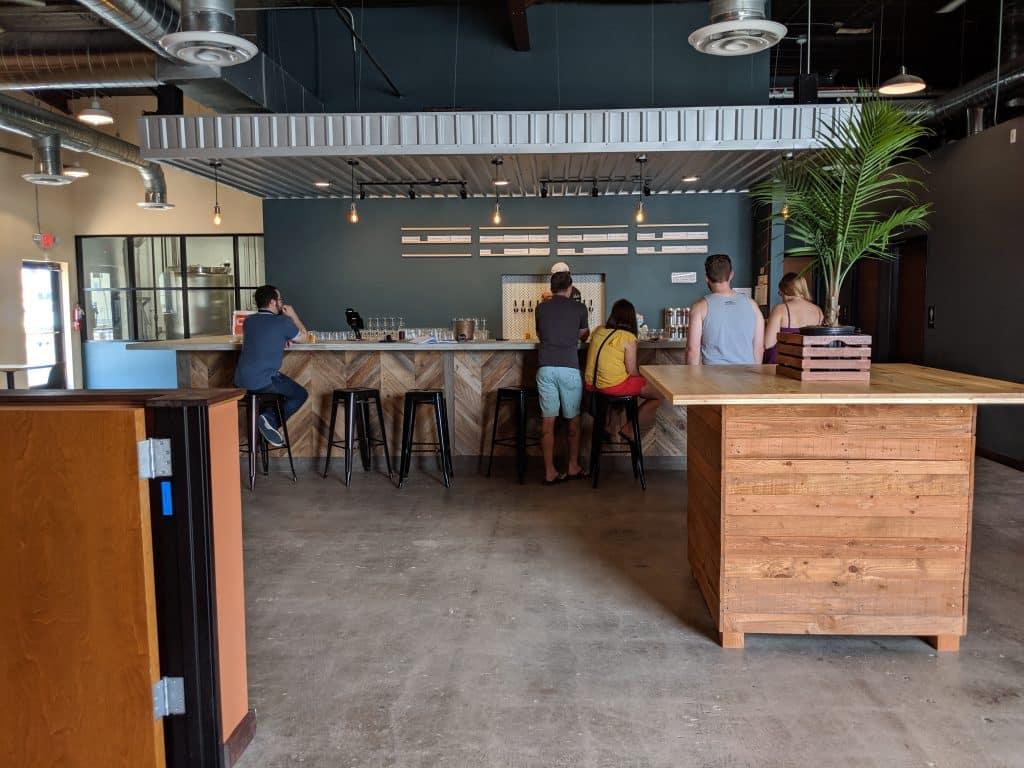 That said, each of the four beers I had were excellent and went down very easy. They serve four ounce tasters, full pours, and have crowlers to take home.

I started with their Sunrise Getdown, a Kolsch-style that has that nice, sharp hop bitterness up front with a mellow backend that’s a little sweet. If you like the Kolsch made by another nearby brewery, you’ll love this one too.

Next, I had their Floating Market, which is a pineapple basil saison and is perfect for Texas summers. It’s very light in color, hazy, with a nice sweet nose. The pineapple really comes through but it’s not overpowering. It’s very light in body with just a little sweetness and I can easily imagine drinking too many out on the patio in the summer.

They have a juicy IPA, Peak Season, because all new breweries must it seems. Their version isn’t just an also-ran though, this is one of the better juicy IPAs I’ve had in a while. It’s light in color, with a solid mouthfeel, a little hazy, and leaves that cryo-hop minty feeling on your tongue at the end, which I love. It’s brewed with Simcoe, Mosaic, and Azacca hops, all in the whirlpool or dry-hopped, so no bittering additions. It’s very nice and this is the only one I went back for seconds (I had to drive home, after all).

The last beer I had is the Split to Hvar, which are two towns in Croatia, where the brothers first had a similar beer they wanted to recreate. Split to Hvar is an Irish Red ale for its base but then has extra chocolate malts added to give it more body and “crunch” for lack of a better word. It tastes just like the description and lands right between a red ale and a porter, in my opinion. It tastes great, is filling, and is definitely a unique take on an old standard. 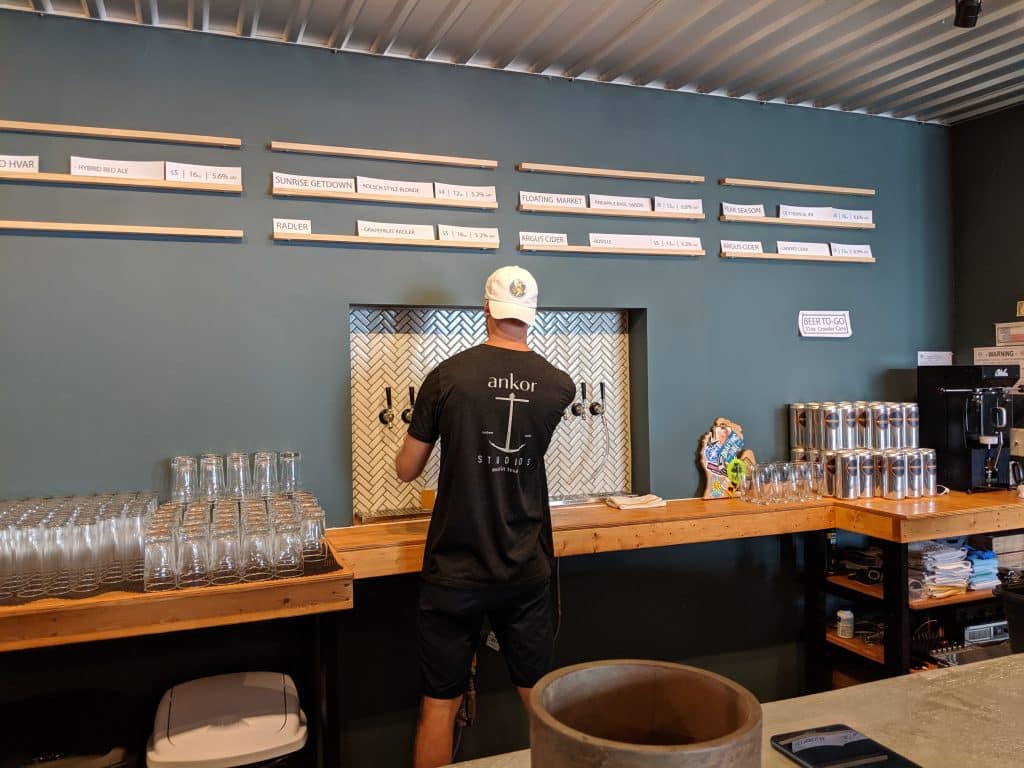 They had a fifth beer on tap – a radler – that I didn’t get to as well as a couple ciders from Argus. They planned to have four more taps for opening weekend but got slowed down by a heat exchanger malfunction. Expect that to be fixed this week and keep a lookout for a wider selection in the next couple weeks.

The taproom is also pretty cool. They have a lot of space inside to sit or stand in while enjoying beers. They’ve installed a glass garage door and some windows that let in a lot of natural light. I mentioned the reclaimed wood booths and tables, there’s also a couple large stand-up tables, lots of stools at the bar, and a few tables outside by the sidewalk. 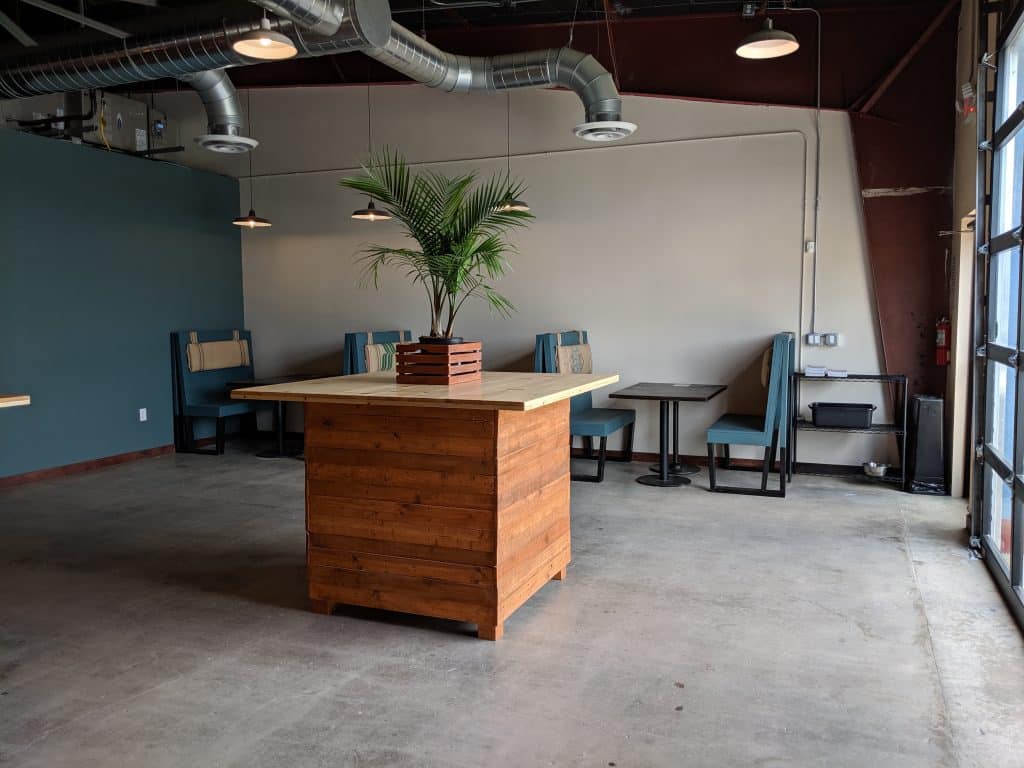 They have a window into the brewhouse so you can watch Bryce at his job when they’re brewing and if you’re an enterprising artist, there’s lots of blank space on the walls that could be filled up.

It looks like Nomadic will pull a regular cast of characters. Some people stopped in as they were driving by for a quick drink, there was a dude with his dog there, a couple with their baby and grandma, and a slew of other people hanging out having fun. It seemed that I looked down for a minute to write some things down and when I looked back up the place was full. On top of that, Kimchi Jon’s is a permanent trailer out front, offering up Korean style dishes and kimchi to go. I had a bite of someone’s order, and I can only describe it as a savory Korean pancake, and it was delicious. 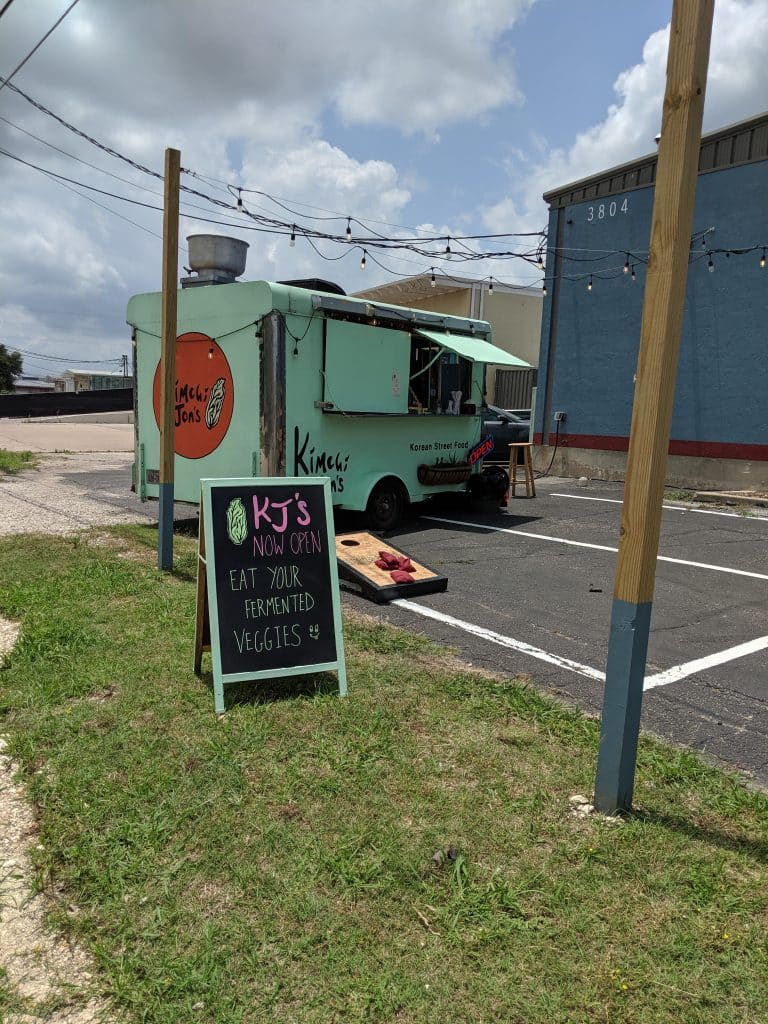 For now, the brothers are just happy to be open but they do have some plans for the future. They have a space carved out to hold barrels for aging beers and, when things settle, would like to do collaborations with breweries from around the world as fits with their name. They also would like to have their beer at a few places around town but plan to have their taproom be the focus of distribution.

Their Grand Opening event is June 22nd , if you have the time, they’ve got a great place with great beers.

Go check them out! 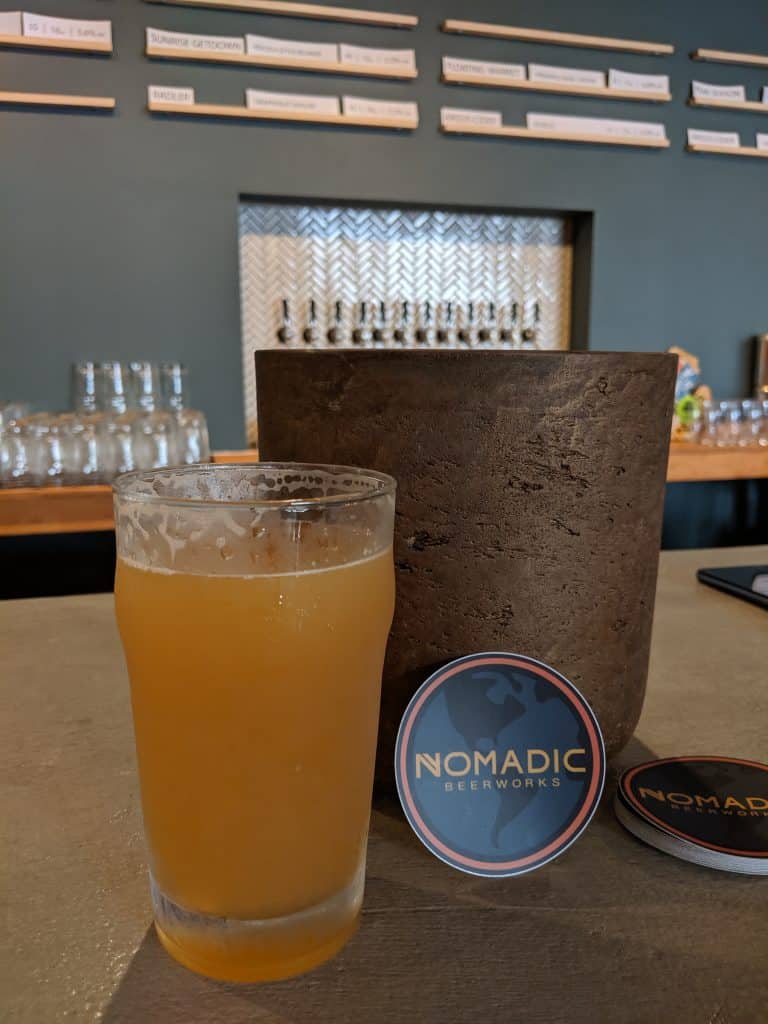