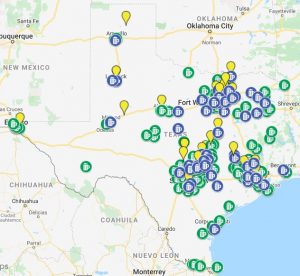 I got around to running the numbers for the number of breweries/brewpubs in the state of Texas. Before we go into the data, here are the a couple of notes on the numbers:

These numbers may not be exact, meaning, I may have left a brewery on that may not actually be making beer still. But, they should be relatively close.

The first area I looked at was the general metro areas. In this assumption, I took all neighboring counties around the cities and included that as the “metro” area. For DFW, all counties around Tarrant and Dallas county were included. In certain cases, an extra county was added in that did not necessarily border the main “city’s” county, but does have a large metro area population residing in it. The metro Austin area continues to be the area with the most breweries, while DFW has been steadily growing (and closing in that gap). Houston and San Antonio still trail behind, but just like DFW, Houston’s numbers have grown a lot in the last couple of years.

Austin gets a lot of help from the Hill Country area with Hays county representing almost 1/4th of the total numbers.

84 counties currently have a brewery/brewpub licensed to operate in Texas. There are a total of 254 counties, so definitely vast sections of Texas remain without any brewery. 39 of those counties have just one brewery, while another 8 counties have over 10 breweries.

Here are the top 10 counties by the number of breweries in them: At the time of writing this, there were 393 licensed breweries in Texas.