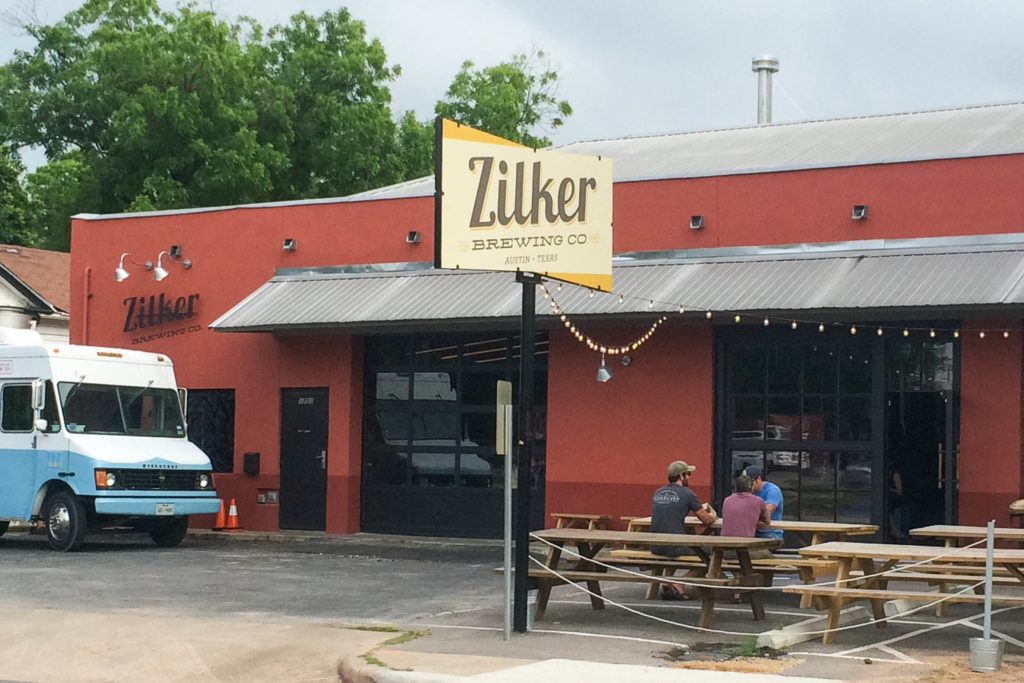 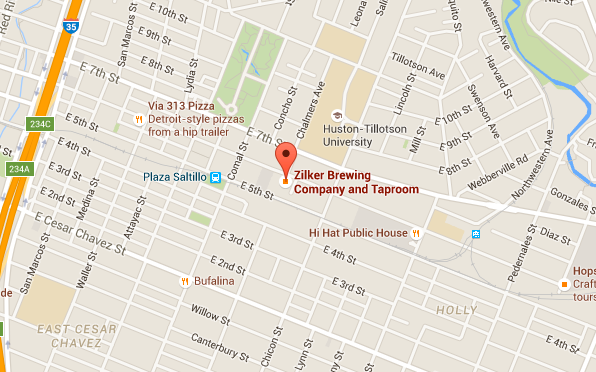 The People
On the tail end of the East 6th Bar District sits Zilker Brewing Company tucked away underneath the behemoth construction site of the Arnold Development across from The Grackle and The Liberty bars. Zilker has taken up shop in a surprisingly spacious space converted from an old mechanics garage. Rolltop doors and ample communal picnic tables give the industrial taproom an airy laid back, neighborhoody vibe. The space is anchored by a curved two-sided bar adjacent to a row of sparkling stainless steel fermenters.

Brothers Forrest and Patrick Clark and longtime friend Marco Rodriguez opened the doors to Zilker Brewing last April 2015 with two mainstay beers (Honey Saison and ESB) expanding to a full portfolio of styles including their top selling Marco IPA, Pale Ale and Coffee Milk Stout. Forrest, Marco and Patrick have known each other for over 20 years attending high school together in Lago Vista. Both Forrest and Marco continued their friendship at UT where they both belonged to the same fraternity, while Patrick attended St. Edwards. The trio began homebrewing in 2008 deciding to open their own brewery after winning numerous awards at local competitions. They pooled their savings and sought enough investor capital to open the brewery of their dreams in April of 2015.

Prior to starting Zilker Brewing, Marco worked for the IRS and Patrick was in the insurance industry and Forrest was working for IBM building cloud based systems for major companies around the country. Forrest shared, “traveling around the country for IBM, I had the opportunity to visit over 250 craft breweries that really helped develop what we wanted Zilker to be like.”  While many breweries are on the outskirts of town tucked away in an industrial park, Zilker Brewing is a bonafide urban brewery situated in a bustling downtown neighborhood. It took over a year to find this Ideal location that was transformed into this sleek, industrial space by architects at Dick Clark & Associates. 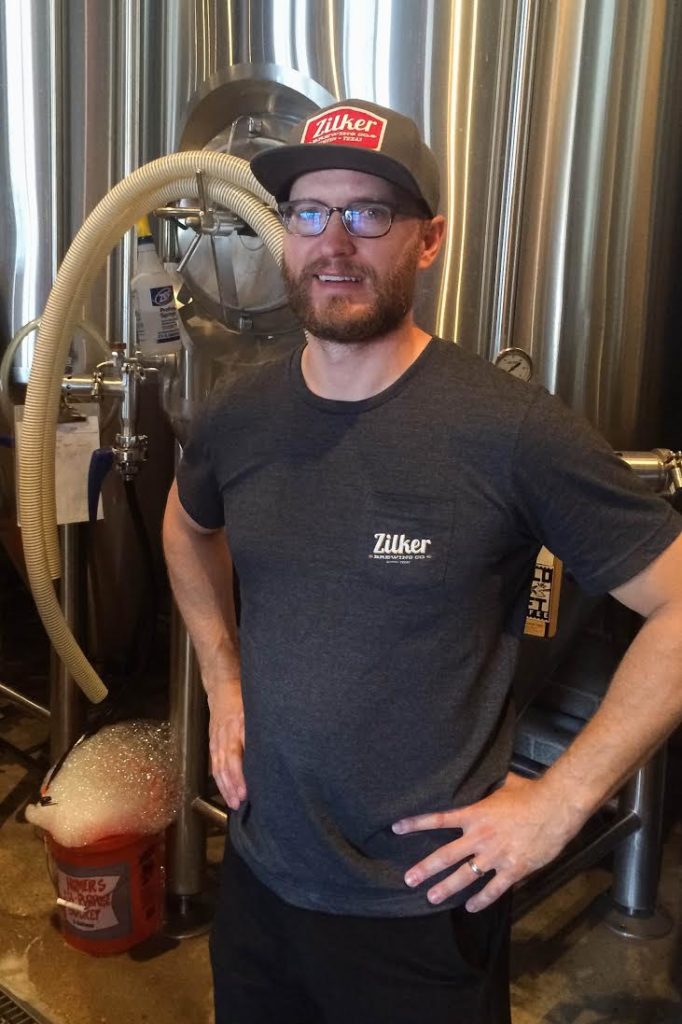 The Brewery
In their first year of business, Zilker Brewing brewed nearly 1000 BBLs with their 15BBL brew system with hopes of increasing their capacity significantly this year. They recently installed an additional 30BBL conical fermenter acquired from Big Bend Brewing Co. out in Alpine with plans to bring yet another 30BBL fermenter online later this summer. Sitting in the taproom it is easy to completely miss the expansive warehouse in back tucked behind a huge sliding door. Underneath massive high ceilings, Zilker has plenty of space to expand believing that they can nearly triple their output in their current space. This space is truly an ideal location for a brewery like Zilker with their cozy taproom situated in a very dense urban walkable, neighborhood very close to downtown without having to sacrifice on an expandable reduction space.

Zilker currently cans their Pale Ale, Marco IPA and Coffee Milk Stout that are sold in stores around the area and kegs other varieties to various draft accounts. They currently self-distribute and plan to keep it that way for as long as possible. Although they certainly have space in their massive back brewhouse, Zilker currently employs local Armadillo Mobile Canning to fill their ever-growing stacks of empty cans destined for beer departments and stores around the area. A couple times a month, Armadillo’s truck pulls up to Zilker’s front rolltop door and unloads its mobile canning line which attaches to one of many brite tanks and the beer is ready to flow. Within a few short hours, Zilker’s storage cooler is brimming with pallets of cans ready to hit store shelves. If you have yet to try it, keep your eyes peeled for a striking can of Marco IPA with its distinctive brightly colored design by local Zocalo Design that was inspired by a pair of swim trunks owned by Marco Rodriguez that mimicked the fabric of a serape blanket. 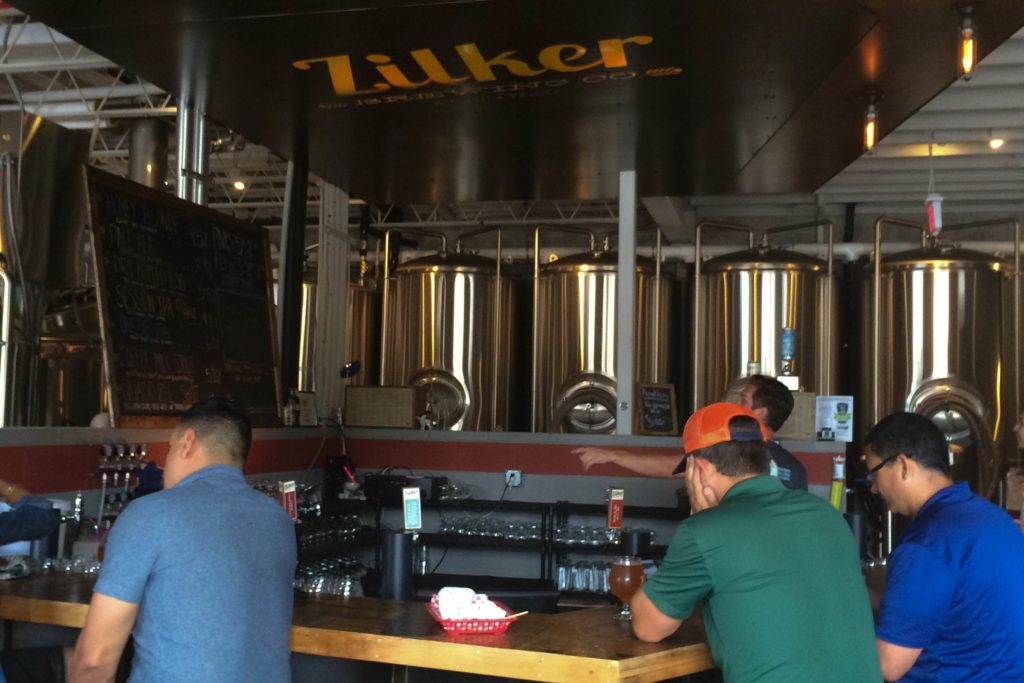 The Beers
On the day of our visit, there were 8 beers available. The tap list at the brewery rotates frequently based on availability and production schedule. Look for a new upcoming in-house IPA program that will feature a slew of special IPAs that will be only be available at the brewery. Also, be sure to keep an eye out for there next seasonal release Tafelbier, a Flemish style table beer which should be a nice, complex yet sessionable ale that should be released shortly.

Honey Blond: The brewery originally launched with a Honey Saison yet transitioned to this blond style on account of its shorter production time and cleaner, more consistent flavor profile. This beer is a light, easy drinker with a nice round honey character coming from the use of Honey Malt.

Dry Hopped ESB: One of my favorite styles that did not disappoint. This hopped up version showcased English Kent Golding Hops and Maris Otter Malt and is a unique, earthy and smooth interpretation of this rarely seen style in these parts.

Session IPA: This seasonal ale just came back on tap in anticipation for warmer summer weather. Crisp, sessionable, citrusy and tropical with a nice approachable blend of Cascade, Columbus, Chinook and Azacca hops with a nice clean finish on account of its Pilsner base malt.

Onezie IPA: Zilker’s anniversary beer that is almost gone for good. It is a delicious SMaSH IPA showcasing the exotic Wai-iti hop from New Zealand with its bright citrusy flavors paired with a special Heirloom Vienna Malt that lends an earthy, sweet balance.

Coffee Milk Stout: This winter seasonal was so popular that they turned it into a year-round offering. Features a revolving cast of locally brewed coffee, the current version showcases a unique Fazeda Santa ines blend from Wild Gift in Round Rock. Zilker uses a very unique two-step technique of introducing coffee flavor into this beer; creating a custom “cold brew” during the whirlpool process then by “dry beaning” with coarsely ground coffee at the end of the brew. Lactose smooths out the mouthfeel and compliments coffee bitterness nicely. Very drinkable stout, year round!

Quadrupel Shot: A crazy beer that was brewed on a whim inspired by brewer Marco’s semi-regular quad shot espresso order at nearby Wright Bros Brew & Brew. It is a traditionally brewed trappist style quad brewed with a light roast Ethiopian coffee from Third Coast Coffee Roasters. Not a lot of coffee comes through; just enough to give it a unique quality begging you to take another sip. 10% ABV is well hidden by the smooth mouthfeel and big malt backbone. 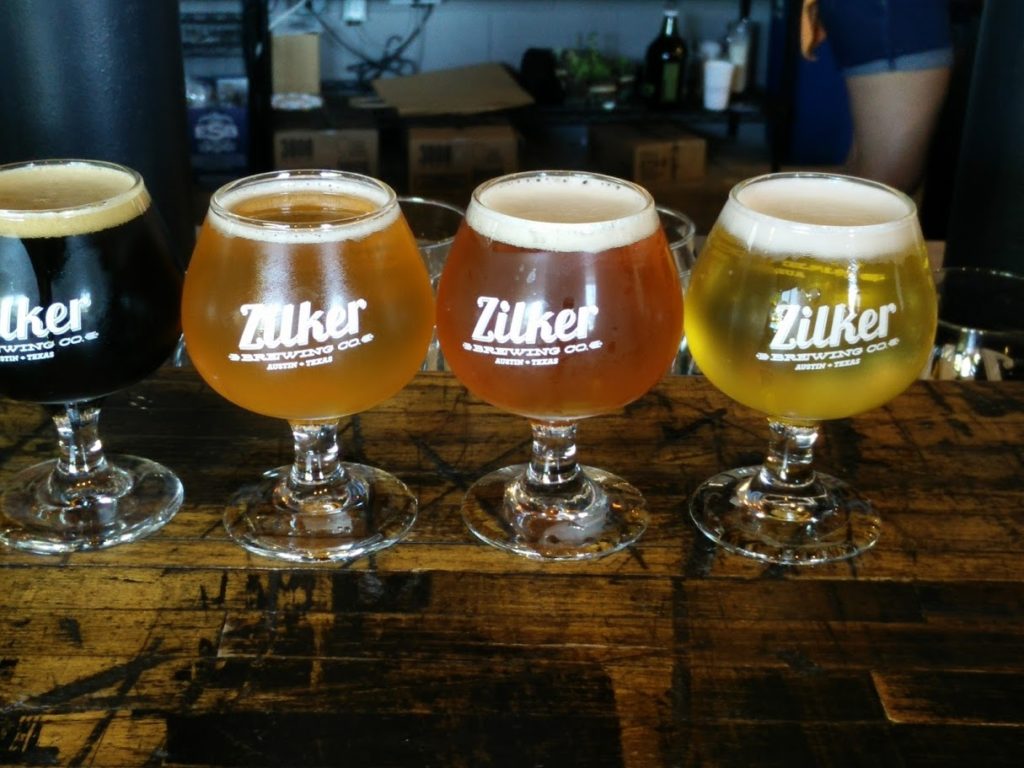 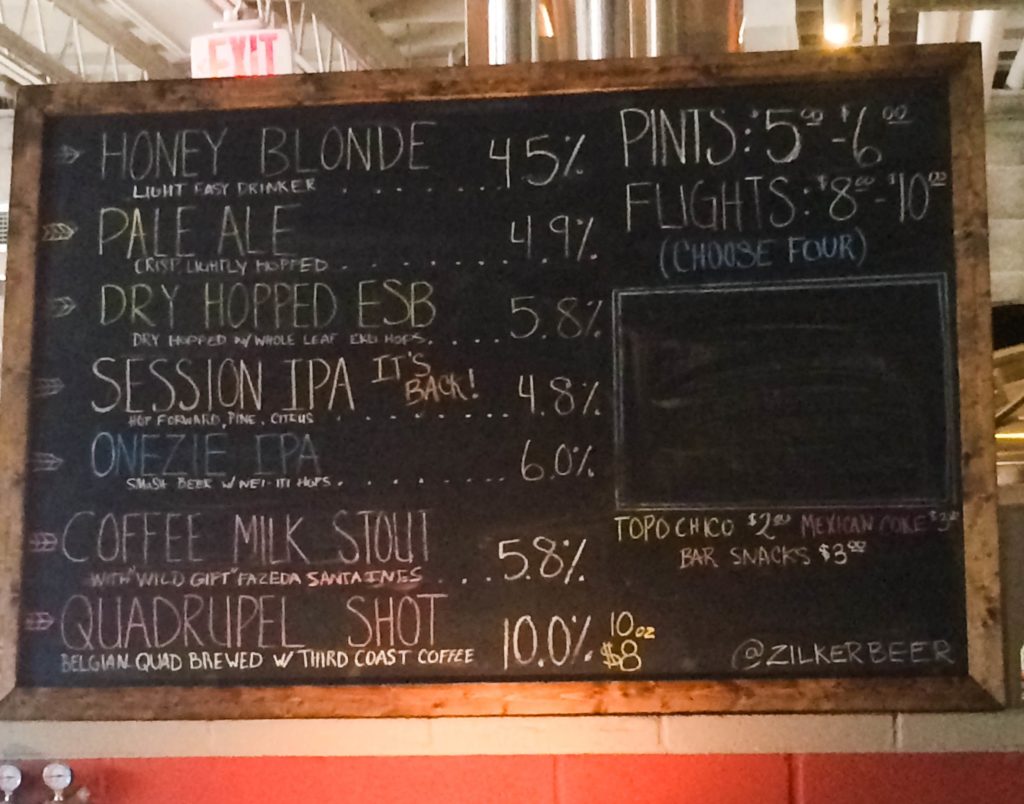 The Details:
Location: 1701 E 6th St, Austin, TX 78702
Hours: Wed – Thur: 4pm-10pm, Fri: 2pm-12am, Sat: Noon-12am, Sunday: Noon-8pm
Kid Friendly: Not Particularly, although you could bring a baby
Dog Friendly: On the Patio
Parking: Just a couple of designated spots in front of brewery, Metered Street Parking along E. 6th & a parking garage down the street at the Arnold Development.
Food: People are welcome to bring in own food, Austinuts at Bar, Food Truck typically in front parking lot (Kick Drum Hamburgers on the day of our visit). Might recommend grabbing some Thai Kun at Whisler’s or East Side King at Liberty Bar if you don’t like truck on-site. 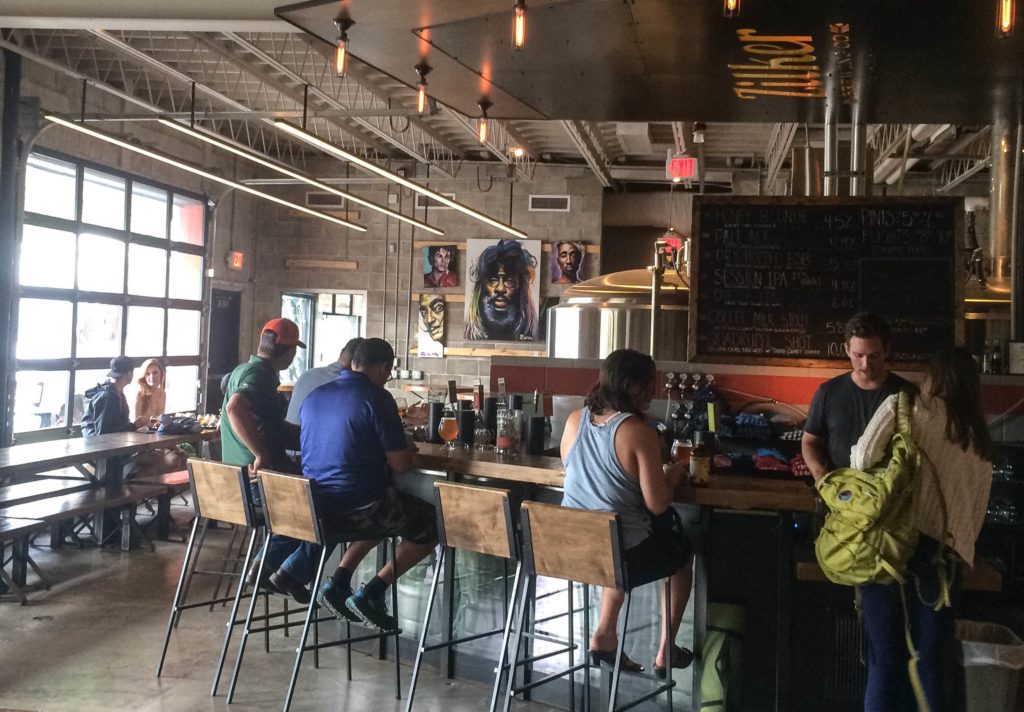 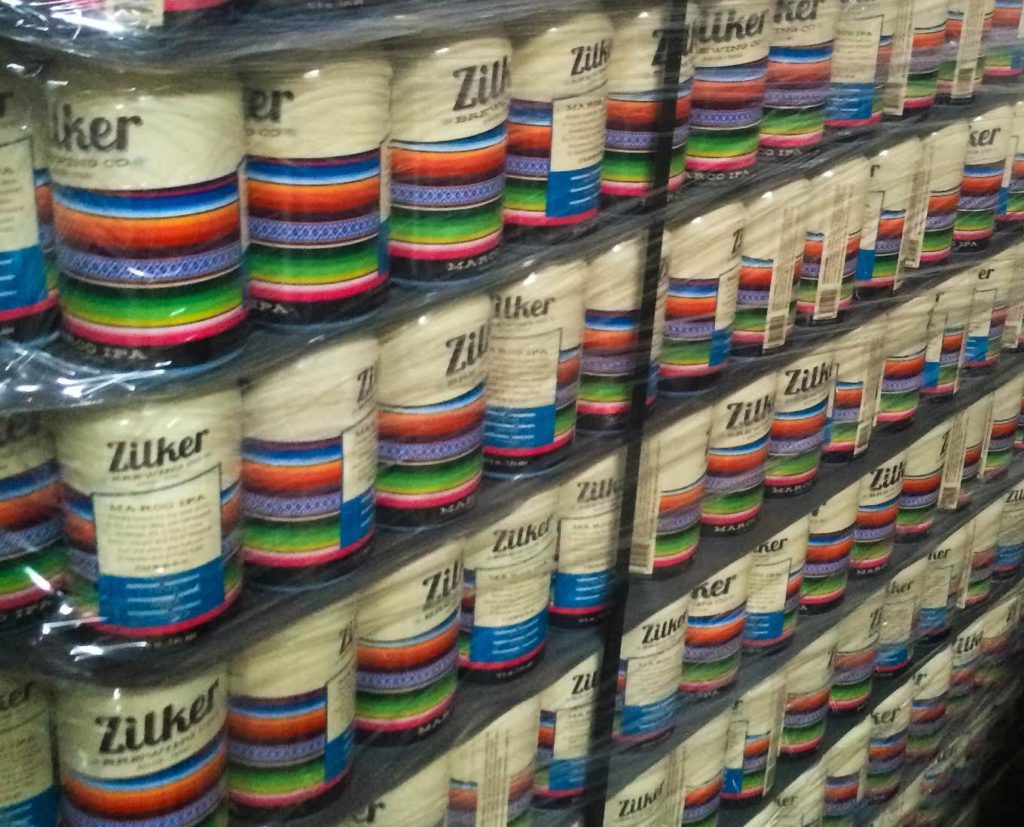